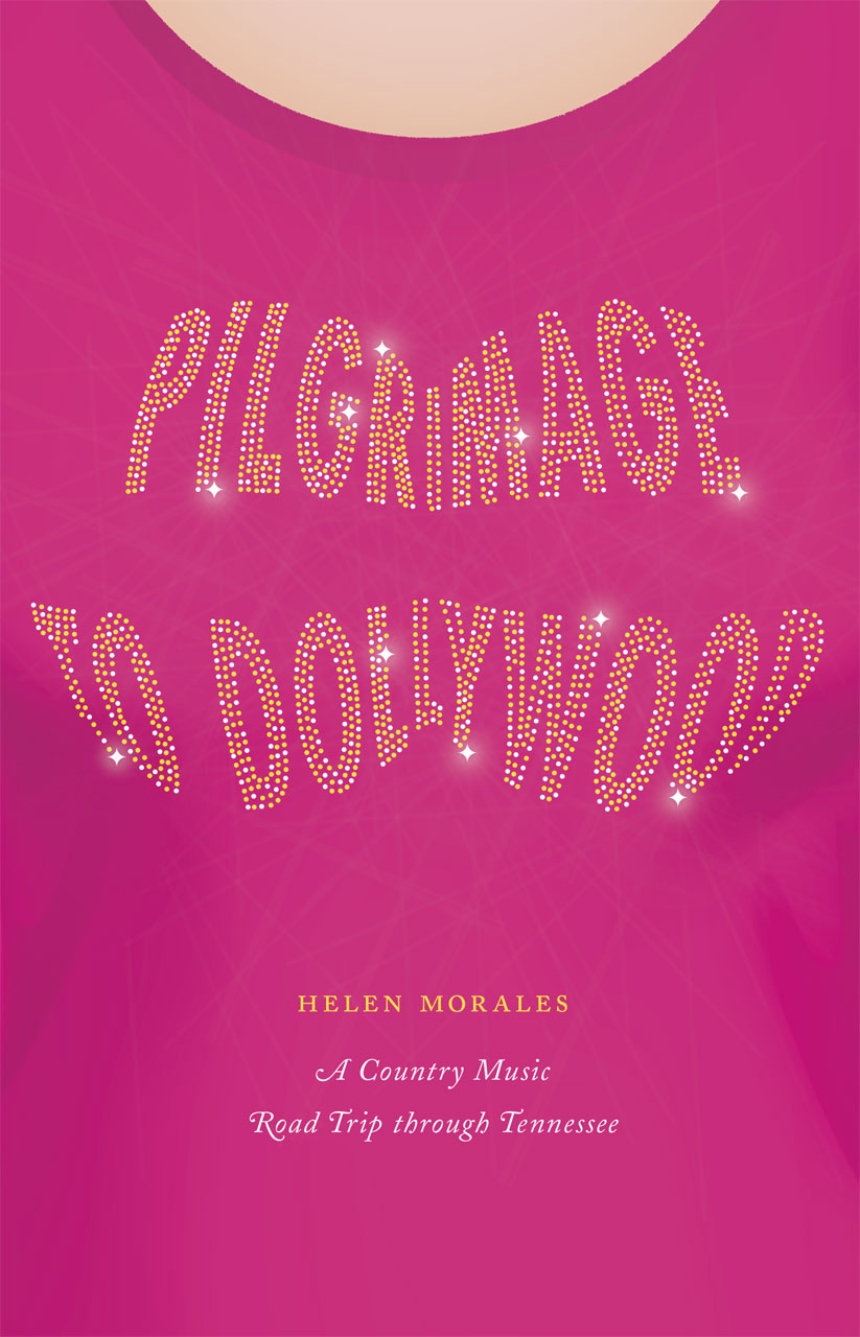 A star par excellence, Dolly Parton is one of country music’s most likable personalities. Even a hard-rocking punk or orchestral aesthete can’t help cracking a smile or singing along with songs like “Jolene” and “9 to 5.” More than a mere singer or actress, Parton is a true cultural phenomenon, immediately recognizable and beloved for her talent, tinkling laugh, and steel magnolia spirit. She is also the only female star to have her own themed amusement park: Dollywood in Pigeon Forge, Tennessee. Every year thousands of fans flock to Dollywood to celebrate the icon, and Helen Morales is one of those fans.

In Pilgrimage to Dollywood, Morales sets out to discover Parton’s Tennessee. Her travels begin at the top celebrity pilgrimage site of Elvis Presley’s Graceland, then take her to Loretta Lynn’s ranch in Hurricane Mills; the Country Music Hall of Fame and the Grand Ole Opry in Nashville; to Sevierville, Gatlinburg, and the Great Smoky Mountains National Park; and finally to Pigeon Forge, home of the “Dolly Homecoming Parade,” featuring the star herself as grand marshall. Morales’s adventure allows her to compare the imaginary Tennessee of Parton’s lyrics with the real Tennessee where the singer grew up, looking at essential connections between country music, the land, and a way of life. It’s also a personal pilgrimage for Morales. Accompanied by her partner, Tony, and their nine-year-old daughter, Athena (who respectively prefer Mozart and Miley Cyrus), Morales, a recent transplant from England, seeks to understand America and American values through the celebrity sites and attractions of Tennessee.

This celebration of Dolly and Americana is for anyone with an old country soul who relies on music to help understand the world, and it is guaranteed to make a Dolly Parton fan of anyone who has not yet fallen for her music or charisma.

“Part quirky travelogue, part study of celebrity culture, part autobiography, Pilgrimage to Dollywood is a witty and self-aware account of being transplanted into an alien culture and deciding to revel in its (and one’s own) otherness.”

“The heart of the book is Morales’s personal meditation on the Dollywood shrine itself, the theme park for feminism, Christianity, and the Old South, its mythical log-cabin home, its worshippers at the Dolly Dollar cash-tills, and the reputation of the whole (deserved or not: discuss) as ‘the redneck Disneyland.’ This is cultural criticism on holiday . . . frank, self-revelatory, comic and clever, revealing greater identification with the heroine than her day job traditionally allows.”

“’This is not a book written from the Olympic heights of an objective observer,’ writes Morales in the introduction to her funny, engaging and erudite book. ‘I confess up front that I love Dolly Parton and her music.’”

“It’ll make you want to experience your own pilgrimage, with the windows down and ‘Jolene’ blaring.”

Perhaps the original house no longer exists. In any case, its mythic status for Dolly Parton fans gives it an imaginary power that is greater than any physical reality. More than one simulation of the house exists. Famously, Dolly has a replica of the house on show at Dollywood that we were to see when we visited the theme park the following day. It is also rumored that Dolly’s Nashville home has parts of her childhood house built into it. Cecelia Tichi uses the term “reliquary” to describe this, meaning that the new home contains parts of the old like a medieval reliquary would contain the remains or relics of a saint. Lest this seem a far-fetched image, some of Dolly Parton’s most dedicated admirers do behave like worshippers of saints. In 2008 a documentary film about Dolly’s followers was made, called For the Love of Dolly, offering what the blurb on the back of the DVD describes as “a poignant and heartfelt look at some of her most avid fans.” The film’s tagline is “Dolly Parton is more than a country singer. She is a way of life.” I didn’t see the film until after I’d returned from my journey (I bought it in the Dixie Stampede gift shop), but watching it made me realize that compared to Dolly’s superfans I was a pathetic excuse for an admirer.

Take Jeanette, who has built a replica of Dolly’s childhood home in the garden of her parents’ house in California. More accurately, she has built a replica of the replica, confessing in the film that she had broken off a piece of wood from the cabin at Dollywood (“to take to Home Depot” to match the color and texture exactly). She has incorporated into the floor of her cabin Dolly Parton’s signature and the title of a song that she asked Dolly to write out for her. From one perspective this seems a bit mad, but from another it is entirely consonant with the tacit contract between idol and fan. In another scene in the film we are shown Dolly giving away rocks from her childhood home to fans at Dollywood. The rocks are treated here like saints’ relics; they have a talismanic power. It may be that Dolly’s childhood home will provide for the world as many rocks and pieces of wood as Saint Thomas has his bones, and Saint Theresa her robes . . .

Jeanette explains the reverence she has for Dolly and anything associated with Dolly. “Anything she touches, I mean, we want. . . . You don’t launder it: it’s history. You retire it.” Jeanette has “retired” the boots, shirt, and underwear that she was wearing the first time she met Dolly. She has kept a bead that fell off one of her costumes. In the most extraordinary scene in the film, Jeanette and her flatmate Melisa, another Dolly Parton fan, spot a car in a car dealership that they recognize belonged to Judy Ogle, Dolly’s long-time friend and personal assistant. It looks as if the car has been traded in, and Jeanette and Melisa go and examine it. They are beside themselves with excitement when they find a Tennessee insurance card inside the vehicle made out to Judy Ogle and Dolly Parton that seems to confirm their detective work. Jeanette, part serious, part hamming it up for the camera, sniffs and licks the seat belts. She picks up a hair from the floor. “Oh my god!” she shrieks, “One with a root!’

The film exposes the extremes to which some people structure their lives (time, money, fantasy) around Dolly Parton, and how a celebrity is treated like saints used to be, but Tai Uhlmann, the director, does not ridicule her subjects. One of the questions she poses is why some people are attracted to having this kind of relationship with a famous person. One answer is that for those who don’t have nurturing families, Dolly becomes a substitute. To some of her fans, Dolly Parton herself has become home. Melisa, estranged from her family because of childhood abuse issues, explains: “Most people would think, well, what would my mom say, or you’d call your mom and say, ‘Hey, this is happening. What should I do?’ I don’t have that. So, for me, I can’t call Dolly, but I can pretend. I can think OK, I’ve heard her say this before, or ‘I know this,’ or you know, in her book she says this . . . and that’s just how I guided myself through my childhood and my early adulthood and got me to this point, you know. And I think I’m sort of a sane person because of it.” She certainly comes across as sane, strong, and likeable. Dolly Parton played a role in her imaginative life from when Melisa was a child. She admits: “I used to pretend I was adopted and that secretly Dolly was my mom.” This may be a more common fantasy than many realize. It is the subject of Tara Johns’s 2011 film The Year Dolly Parton Was My Mom, an independent Canadian film set in 1976 that focuses on a teenager who learns that she is adopted and becomes convinced that Dolly Parton must be her biological mother. One thing that struck me, listening to Melisa, with whom I have much in common even if I have never shared her specific fantasy, is how, well, sensible she is about her extreme fandom. She is self-aware and matter-of-fact: “My own little fantasy of her got me through so much. I needed sort of a positive guidance and I found that in Dolly.” At the end of the documentary we are told that Melisa decided to take time off from following Dolly to focus on a career and that she has moved from Nashville. I think about her sometimes and truly hope she is doing well. One anecdote Melisa tells about her life as a devoted fan of the singer shows why Dolly Parton is the perfect fantasy mother. Melisa relates that one of her childhood prayers was that every night “Dolly would tuck me in and say goodnight to me so that I could feel safe at night.” When the adult Melisa and her friend Jeanette were camping out every night on the set of Dolly’s film Unlikely Angel , Dolly chatted with them and Melisa told her about this childhood fantasy. And every night before she went to bed, Dolly Parton came out of her trailer, went over to the two figures huddled in sleeping bags, and wished Melisa goodnight. Angel indeed.