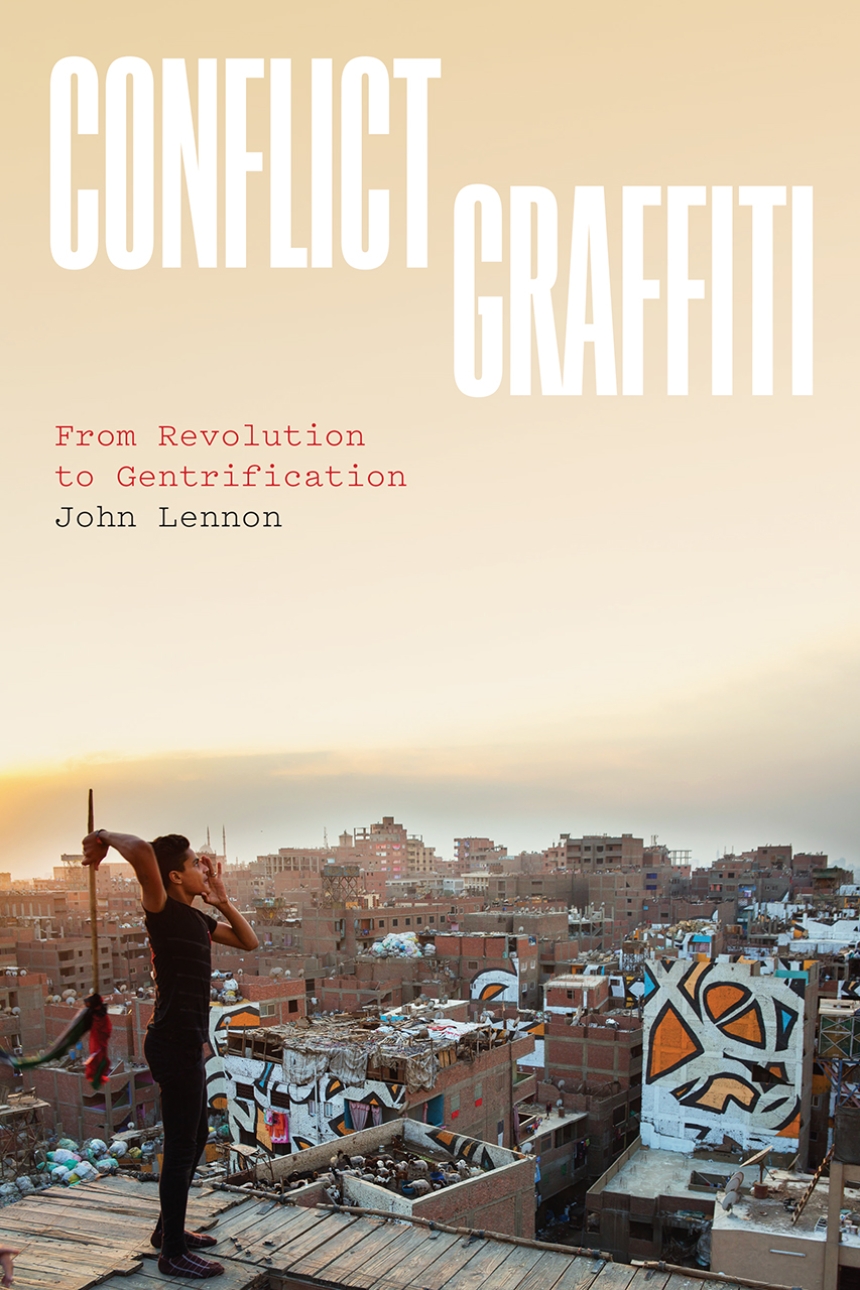 From Revolution to Gentrification

From Revolution to Gentrification

This study examines the waves of graffiti that occur before, during, and after a conflict—important tools of political resistance that make protest visible and material.

Graffiti makes for messy politics. In film and television, it is often used to create a sense of danger or lawlessness. In bathroom stalls, it is the disembodied expression of gossip, lewdness, or confession. But it is also a resistive tool of protest, making visible the disparate voices and interests that come together to make a movement.

In Conflict Graffiti, John Lennon dives into the many permutations of graffiti in conflict zones—ranging from the protest graffiti of the Black Lives Matter movement in Ferguson and the Tahrir Square demonstrations in Egypt, to the tourist-attraction murals on the Israeli Separation Wall and the street art that has rebranded Detroit and post-Katrina New Orleans. Graffiti has played a crucial role in the revolutionary movements of these locales, but as the conflict subsides a new graffiti and street art scene emerges—often one that ushers in postconflict consumerism, gentrification, militarization, and anesthetized forgetting.

Graffiti has an unstable afterlife, fated to be added to, transformed, overlaid, photographed, reinterpreted, or painted over. But as Lennon concludes, when protest movements change and adapt, graffiti is also uniquely suited to shapeshift with them.

“Conflict Graffiti strengthens our understanding of the role graffiti plays in place making and in social lives embroiled in conflict. Lennon shows that walls, and the writing on them, are formative elements of our world—they create and supersede conflict, and they represent not only human suffering but creativity and resilience. This book provides a fascinating glimpse into unknown places, movements, genres, and histories of graffiti.”

“Deeply researched and beautifully written, Conflict Graffiti reveals the ways in which street graffiti both detonates and documents global battles over public space, politics, property, and cultural belonging. Indecipherable to some, invitational to others, such graffiti provides a potent resistance to established authorities by hiding in the light of its own illicit visibility. Yet these same authorities in turn use their own forms of graffiti and street art to signal not resistance, but pacification and privilege. Attuned to such complexity, Conflict Graffiti brilliantly theorizes graffiti and its place in contemporary global dynamics.”

“From Ferguson to Palestine, this elegantly crafted and vividly detailed text takes graffiti, an under-theorized form of political action and expression, and locates it firmly in the arsenal of resistance to oppression. Closely articulated to forms of state violence and the specificity of time and place, graffiti is a ‘tool of dissent’—speaking back and speaking to—in its demands for radical change. While never losing sight of the creative and political impulse, Lennon does not mince words in his critique of the commodification and appropriation of street art.”

“Conflict Graffiti is a thoughtful, comprehensive and engaging analysis of graffiti and the people who participate in this activity in the context of contemporary political conflicts throughout the world. It should be of interest to scholars, practitioners, and students for years to come.”

"As [Lennon] shows in this accessible and expertly researched monograph, graffiti has the power to educate those who take the time to read the writing on the walls. In addition to the romantic view of graffiti as artistic expression, graffiti is a window on to what the everyday inhabitants of a particular place have to say, what they think, what they desire and what they rally against, free from the pressures of profit-motivated actors and government censors... [A] much-needed lesson for a whole new audience."