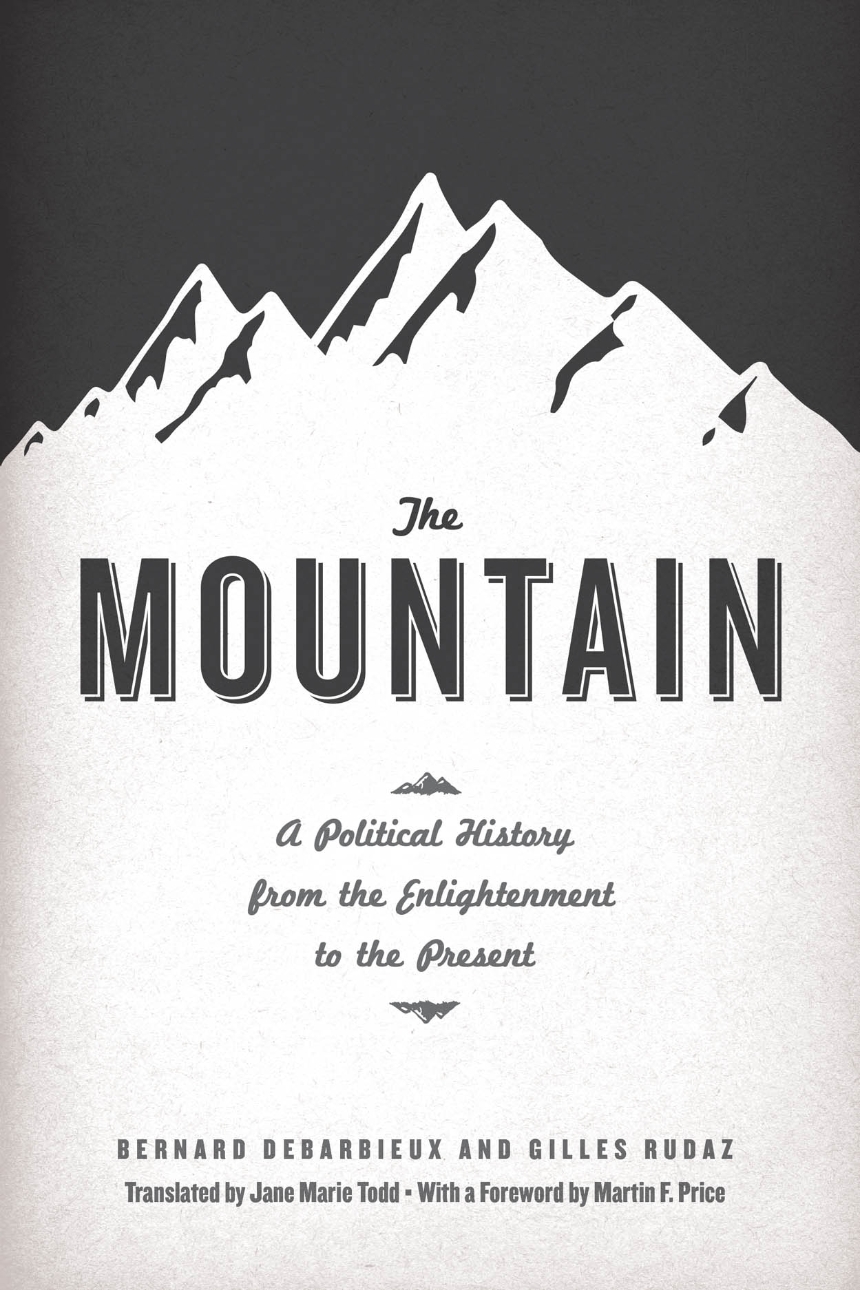 A Political History from the Enlightenment to the Present

A Political History from the Enlightenment to the Present

Translated by Jane Marie Todd
With a Foreword by Martin F. Price

In The Mountain, geographers Bernard Debarbieux and Gilles Rudaz trace the origins of the very concept of a mountain, showing how it is not a mere geographic feature but ultimately an idea, one that has evolved over time, influenced by changes in political climates and cultural attitudes. To truly understand mountains, they argue, we must view them not only as material realities but as social constructs, ones that can mean radically different things to different people in different settings.

From the Enlightenment to the present day, and using a variety of case studies from all the continents, the authors show us how our ideas of and about mountains have changed with the times and how a wide range of policies, from border delineation to forestry as well as nature protection and social programs, have been shaped according to them. A rich hybrid analysis of geography, history, culture, and politics, the book promises to forever change the way we look at mountains.

"The authors' treatment of the subject is interesting, clearly unique, and provides a perspective hitherto unrealized. The book's strengths, besides its variety of topics, are its global perspective and inclusion of contemporary issues. Essential."

"The Mountain is a remarkable book, ambitious in scope and original in its argument that the history of mountains is to be found in the political configurations of modernity rather than in the mind or the imagination."

"The Mountain certainly represents a milestone in the study of the mountain as an idea: a soon-to-be classic of mountain studies."

“The Mountain offers an outstanding social and political science approach to mountains. Extending from the Enlightenment to the present day, the authors demonstrate an exceptional familiarity with the literature and recount how mountains, by embracing environment, development, and people, became an integral part of world politics following the 1992 Earth Summit in Rio de Janeiro and the United Nations designation of 2002 as the International Year of Mountains. This book is a tour de force—indispensable for anyone interested in mountains or anyone concerned about the future of our world.”

“With The Mountain, Debarbieux and Rudaz provide a rich offering of facts, anecdotes, and analyses about the role of mountains in international politics and in the imaginations of explorers, scientists, and mountain dwellers. Fascinating and highly readable, this ambitious book will appeal to armchair travelers around the globe, as well as any student of geography, politics, and international development.”

“Receding glaciers, threatened freshwater supplies, and high—magnitude catastrophic events are increasingly focusing global attention on the world’s high mountain landscapes and people.  The Mountain: A Political History from the Enlightenment to the Present is a timely and important contribution to our understanding of how definitions of mountains, their meaning, and perceptions of their value evolved throughout time.  It should be required reading for those in the mountain development, conservation, practitioner, and scientific communities alike.”

"Mountains have evoked a range of feelings from awe to dread since antiquity. Little wonder then that mountains have occupied, in both literal and figurative senses, central positions in an array of religious and cosmological narratives. Mountains also figured prominently in the development of the scientific revolution and more recent notions of environmental conservation and sustainability. That provides the starting point for The Mountain: A Political History from the Enlightenment to the Present, but instead of covering that familiar ground, Bernard Debarbieux and Gilles Rudaz offer a wide-ranging examination of how mountains have served as frameworks and justifications for various types of social and political action intertwined with the larger project of modernity."

One / The Mountain as Object of Knowledge

Part I: The Mountain of States and Nations

Part II: The Mountain on a Global Scale

Six / The Mountain and Colonial and Postcolonial Territoriality
Seven / Exporting and Acclimatizing Regional Planning Models to the Tropics
Eight / The Globalization of Mountain Issues
Nine / Mountain Men and Women of Globalization
Ten / The EU Mountain: Nowhere to Be Found?
Eleven / The Unifying Mountain

Conclusion
Notes
Index
Back to top