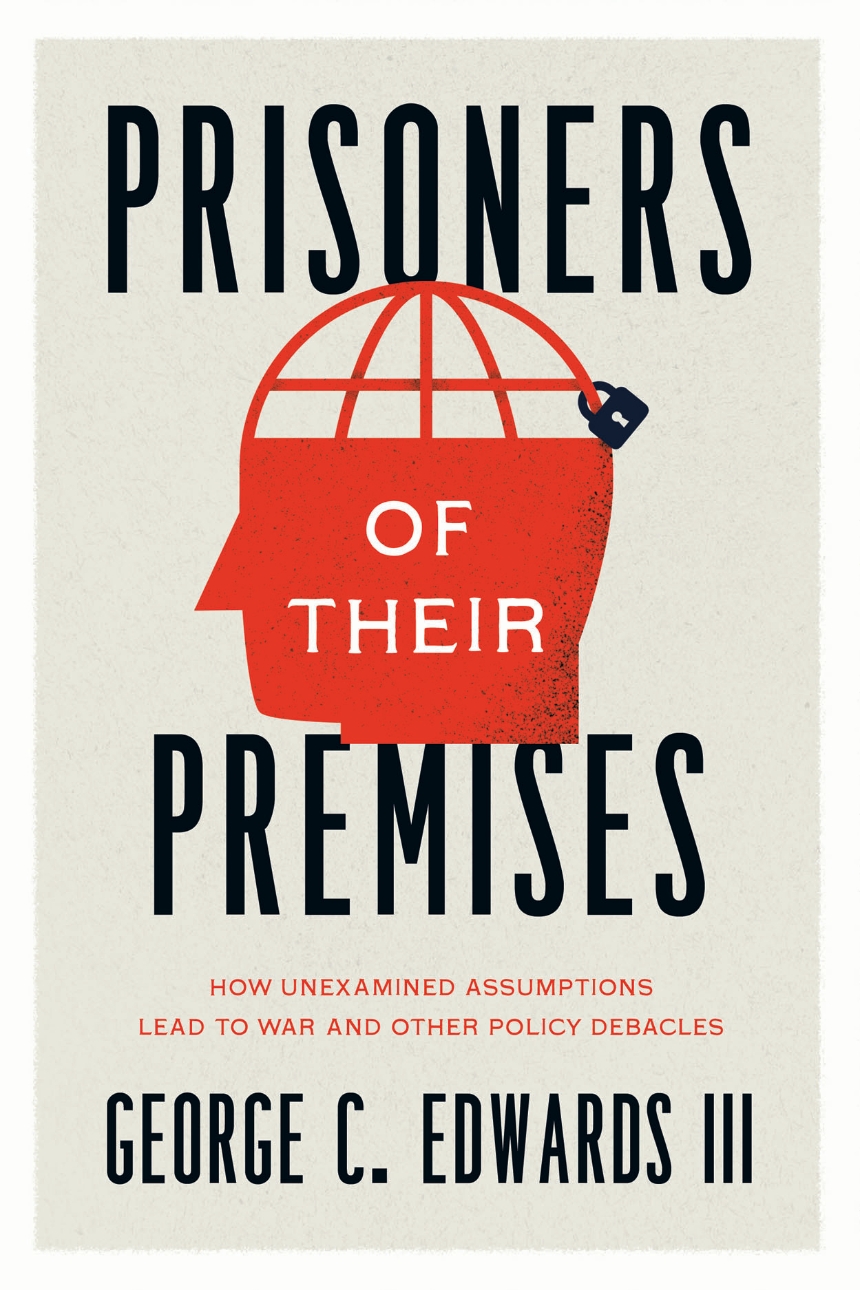 Prisoners of Their Premises

How Unexamined Assumptions Lead to War and Other Policy Debacles

Prisoners of Their Premises

How Unexamined Assumptions Lead to War and Other Policy Debacles

A timely look at the real costs of leaders not examining their assumptions.

Why do accomplished and stable leaders frequently make calamitous decisions with devastating consequences for their countries—and other nations? We debate debacles such as the American involvement in Vietnam, seeking to understand why leaders pursued disastrous policies. In Prisoners of Their Premises, George C. Edwards III argues that the failure of leaders to examine their premises—the assumptions they make about the world and situation they are dealing with—cause them to ignore real problems or pursue policies that, in costly ways, deal with problems that are different than they think or simply don’t exist. Edwards looks at the role of premises in identifying (or ignoring) a problem in a series of case studies that range from strategic decisions in World War I and the Korean War to the wars in Vietnam and Iraq. Too often, unexamined premises color initial decisions to pursue a policy and shape the strategies leaders employ to achieve their goals, with grave consequences for their countries, organizations, and potentially the world. Timely and important, Prisoners of Their Premises demonstrates the real costs leaders incur by failing to question their assumptions.

“Political leaders’ underlying assumptions about the world, and their failure to revise those assumptions in response to new information, are major sources of policy failure in both foreign and domestic politics. Edwards does a masterful job of exploring the sources of leaders’ assumptions, the psychological and political constraints on updating those assumptions when contrary information emerges, and the impact of unexamined assumptions on policy failure in recent American wars. Guided by theory and grounded in history, Prisoners of Their Premises is an important new contribution to our understanding of decision making and American foreign policy.”

“In this compelling book, one of our leading scholars of the presidency shows how many of the most infamous blunders in foreign policy decision making—from the Bay of Pigs invasion to the Iraq War—have one ingredient in common: leaders who are overly attached to their preconceptions. Engaging and incisive, Prisoners of Their Premises will be as useful to students of American foreign policy as it will be for anyone seeking to engage in epistemic accountability and make better decisions.”

"In this elegantly argued and important book, Edwards examines the premises policymakers hold and explains how they lead to disastrous foreign policy decisions. His focus on linking premises to the way we define what is (or is not) a problem is original and refreshing and advances our understanding of human decision making.”

“Prisoners of Their Premises is a rich and compelling examination of the role of premises in how foreign policy decision makers identify problems. It provides insights into important historical and contemporary cases of international conflict and is a must-read for those interested in foreign policy analysis or political psychology.”

“Some of the most significant setbacks in the foreign relations of the United States have grown out of preconceptions, often unexamined and untested, that policymakers brought with them into office. Prisoners of Their Premises is a thoroughly researched and highly readable account of how this type of foreign policy malpractice can occur. This book is an excellent guide to understanding how the United States stumbled into some legendary past failures and to formulating the sorts of questions that need to be addressed to avoid similar missteps in the future.”

"In this concise analysis, Edwards explores how and why leaders, especially presidents of the United States, make some of their most difficult choices concerning perceived problems. . . . The work challenges the reader to consider preexisting beliefs in political decisions and the difficulty leaders face to quickly process and analyze information. The work serves as a helpful reminder that everyone uses premises when making decisions, but that should not play a dominant role."