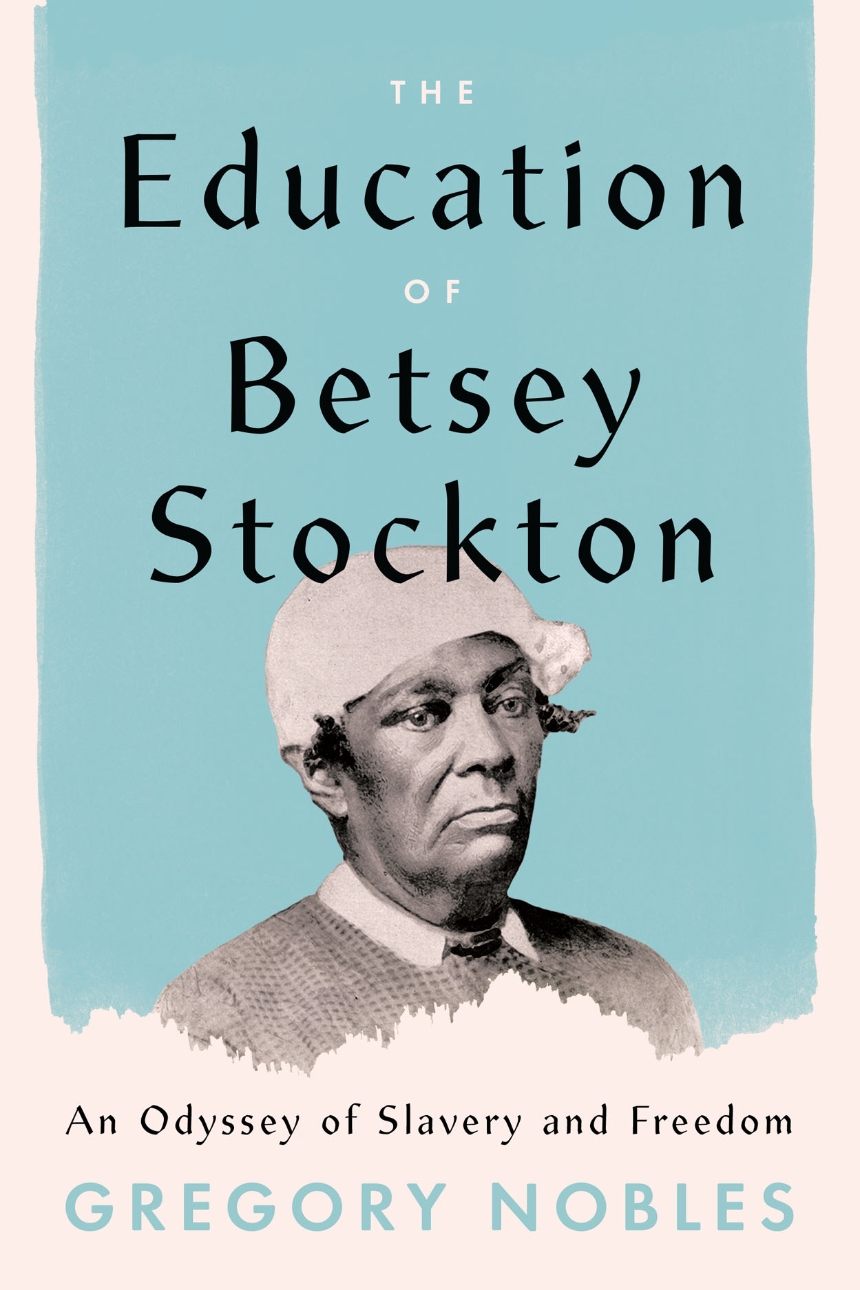 The Education of Betsey Stockton

An Odyssey of Slavery and Freedom

The Education of Betsey Stockton

An Odyssey of Slavery and Freedom

A perceptive and inspiring biography of an extraordinary woman born into slavery who, through grit and determination, became a historic social and educational leader.

The life of Betsey Stockton (ca. 1798–1865) is a remarkable story of a Black woman’s journey from slavery to emancipation, from antebellum New Jersey to the Hawai‘ian Islands, and from her own self-education to a lifetime of teaching others—all told against the backdrop of the early United States’ pervasive racism. It’s a compelling chronicle of a critical time in American history and a testament to the courage and commitment of a woman whose persistence grew into a potent form of resistance.

When Betsey Stockton was a child, she was “given, as a slave” to the household of Rev. Ashbel Green, a prominent pastor and later the president of what is now Princeton University. Although she never went to school, she devoured the books in Green’s library. After being emancipated, she used that education to benefit other people of color, first in Hawai‘i as a missionary, then Philadelphia, and, for the last three decades of her life, Princeton—a college town with a genteel veneer that never fully hid its racial hostility. Betsey Stockton became a revered figure in Princeton’s sizeable Black population, a founder of religious and educational institutions, and a leader engaged in the day-to-day business of building communities.

In this first book-length telling of Betsey Stockton’s story, Gregory Nobles illuminates both a woman and her world, following her around the globe, and showing how a determined individual could challenge her society’s racial obstacles from the ground up. It’s at once a revealing lesson on the struggles of Stockton’s times and a fresh inspiration for our own.

"As was true of his biography of John James Audubon, Gregory Nobles, in his new book, The Education of Betsey Stockton: An Odyssey of Slavery and Freedom, gives readers broad and deep insights into the time period of his subject and those parts of the United States in which she lived and worked. . . . What it means for a reader is that we have a chance to be fully immersed in events and beliefs of our own American past while the author pieces together, like a quilt, the life of a specific historical human being. "

“At last, Betsey Stockton receives the full biography she deserves. Working with the scant records of Stockton’s life, and brilliantly situating her experiences amidst broader social and political debates, Nobles reveals Stockton as a woman of bravery and persistence, intellect and faith. Long a figure of local renown, she here claims her place in the broader story of remarkable women who emerged from enslavement to become civic leaders who reshaped Black community life.”

Martha A. Sandweiss, founding director of The Princeton & Slavery Project

“In The Education of Betsey Stockton, Nobles uncovers a once-hidden thread in the rich and complex historical tapestry of this country. Through his narrative attentiveness, he expands our understanding of the intricately interwoven historical issues of power and race, while simultaneously celebrating Betsey Stockton’s incalculable impact on the communities she blessed with her presence. This book is a necessary addition to the complicated story of Blacks in America.”

"Nobles’ biography of Betsey Stockton returns to us an astonishing heroine of early America. Born into slavery in New Jersey, Stockton gains freedom, literacy, and a new life as a Christian missionary and teacher in Hawai’i before her return to eastern North America as a teacher and, in Princeton, a founder of the town's First Presbyterian Church of Color and a pillar of the community.  Nobles’ page-turning narrative greatly expands our understanding of the 'freedom dreams' of African Americans in the pre-Civil War United States."

Leslie M. Harris, author of In the Shadow of Slavery: African Americans in New York City, 1626-1863

“Using only scraps of historical evidence, Nobles thoroughly succeeds in tracing the life of an individual African American—Betsey Stockton—and simultaneously illuminating the end of slavery in the North. Nobles is a gifted writer, an excellent historian, and an imaginative researcher, and his well-timed book is a pleasure to read.”

"Betsey Stockton’s odyssey took her from Princeton to the faraway Hawaiian Islands, where she began a missionary school for commoners. After venturing elsewhere in the United States and Canada, she returned to New Jersey where, despite obstacles posed by a racist society, she continued to educate people of color. In Nobles’ skillful telling, the story of Stockton’s life (ca. 1798 through the Civil War) shows how history is made at the local level by individuals who dedicate themselves to a cause. Stockton’s accomplishments as churchwoman and educator never earned her national fame, but her work was as crucial as that of Frederick Douglass or Harriet Tubman to the struggle for freedom and civil rights."

Betsey Stockton had made up her mind to get out of Princeton and never come back. She would be leaving everything and everyone she had known, including the institution of slavery, into which she had been born. Now in her early twenties and a free woman, she would be making the biggest step in her life so far—going to the Sandwich Islands as a missionary. She would be the first single woman, the first Black woman, to do that; she would be making history.
But she had to make one last stop—to say good-bye to the Reverend Ashbel Green, a man with whom she had had a long and complicated relationship. As an enslaved child, she had been given to Green’s wife, and she had grown up under Green’s authority, first in slavery and then in indentured servitude, until her teenaged years, when she became emancipated. Even then, she stayed in his household, working for wages, saving her money until she had enough to leave. This would be an emotional farewell.

That evening, she stood in the downstairs hallway in Green’s house, outside his study, waiting for him to usher her in. Like Green, she had come to live in that house in October 1812, when he became president of the College of New Jersey. She had cooked and cleaned and done all sorts of chores, and when she could find time, she immersed herself in the books in Green’s study. Betsey Stockton had never been to school, but she had become an eager reader, even of the ponderous volumes that lined Green’s shelves. When she came into his study now, she was at home.

She didn’t come alone. Joining her was a thin, sharp-featured young man about her age named Charles Samuel Stewart, who had been one of Green’s students at the college and later had graduated from the nearby Princeton Theological Seminary. Stewart was white, Stockton was Black, and they had determined to work together as part of a larger “missionary family”—including Stewart’s young bride Harriet and fifteen others—heading for the Pacific under the auspices of the American Board of Commissioners for Foreign Missions (ABCFM).

When Betsey Stockton had applied to the ABCFM a year earlier, Ashbel Green wrote a letter of recommendation that covered, to use Green’s terms, her life from the time she was “given, as a slave” to Green’s wife, through her “wild and thoughtless” early teenage years, and coming to her “saving change of heart” a little later. Now, she was about to start the next chapter of her life, heading for New Haven to board a whale ship, heading to the Pacific with her own sense of purpose.
By contrast, Ashbel Green was old, just past his sixtieth birthday, white-haired and tired, worn down by the decade of his college presidency. In that time he had suffered the deaths of two wives and one son, he had been derided and defied by unruly students, and he had lost the favor of the college trustees. He was in fact about to resign, leaving Princeton himself, for Philadelphia.

Betsey Stockton and Charles Stewart and Ashbel Green talked, prayed, and finally took leave of each other. “The next day they went East and I West,” Green would write in his diary, “probably to meet no more on earth.”

But they would meet again, and in time, Betsey Stockton would return to Princeton. She would become a leader in the town’s Black community, a woman who helped build institutions of resistance to racism over the decades until she died, in 1865, the year slavery came to a legal end in the United States.

Today, it’s still possible to find markers honoring Betsey Stockton in Princeton, some old, some very new. The newest is a plaque that stands in front of the old President’s House (now called Maclean House, home of the university’s Alumni Association), which lists her as one of at least sixteen enslaved people who lived there in the eighteenth and nineteenth centuries. But to see the older—and more personal—memorials to her, you have to leave the campus, cross Nassau Street, the town’s main thoroughfare, then head down Witherspoon Street, the center of the town’s small business district. The shopping area fades away after only two blocks, at the Paul Robeson Center for the Arts, named for the famous actor, athlete, and activist, who was born in Princeton. A block or so more takes you to the town’s old cemetery on the right side of the street and the historic Witherspoon Street Presbyterian Church on the left, a modest white frame church building. It’s just a few blocks from the campus—but in a historically different world.

Outside the church is a sign, part of the New Jersey Women’s Heritage Trail. “Betsey Stockton (1798–1865) began life as a slave for the prominent Stockton family in Princeton,” it reads, going on to give the basic outline of her life—becoming free, going to Hawaiʻi as a missionary, coming back to teach in Philadelphia and Canada, then returning to Princeton in 1835. There she “spent the rest of her life working to enrich the lives of members of her local community,” as one of the founding members of the First Presbyterian Church of Colour and teaching in the Witherspoon School for Colored Children. “When Betsey Stockton died in Princeton at the age of 67,” the sign concludes, “she was memorialized by former students who donated a stained glass window in her honor to the church.”
And inside the church there’s the window, an orderly ensemble of geometric chapes in reds, blues, purples, and yellows, that contains only seven words: “Presented by the Scholars of Elizabeth Stockton.” There’s also a brass plaque, installed in 1906 on the same wall as the window, that notes her long life of service in Princeton, where she became a “powerful influence for good in the community.” Since then, she has lived in the collective memory of the town’s Black community, particularly in the Witherspoon Street Presbyterian Church, and in the recent work of the Witherspoon-Jackson Historical and Cultural Society to tell the larger history of African American people in Princeton.

A few years ago, when I first read the sign and saw the window and plaque, Betsey Stockton’s story struck me as a remarkable saga—a journey from slavery to freedom, from Princeton to the Pacific, all the way around the world, and eventually back to Princeton. I’ve written this book to tell that story as fully as I can.
Gallery
Back to top 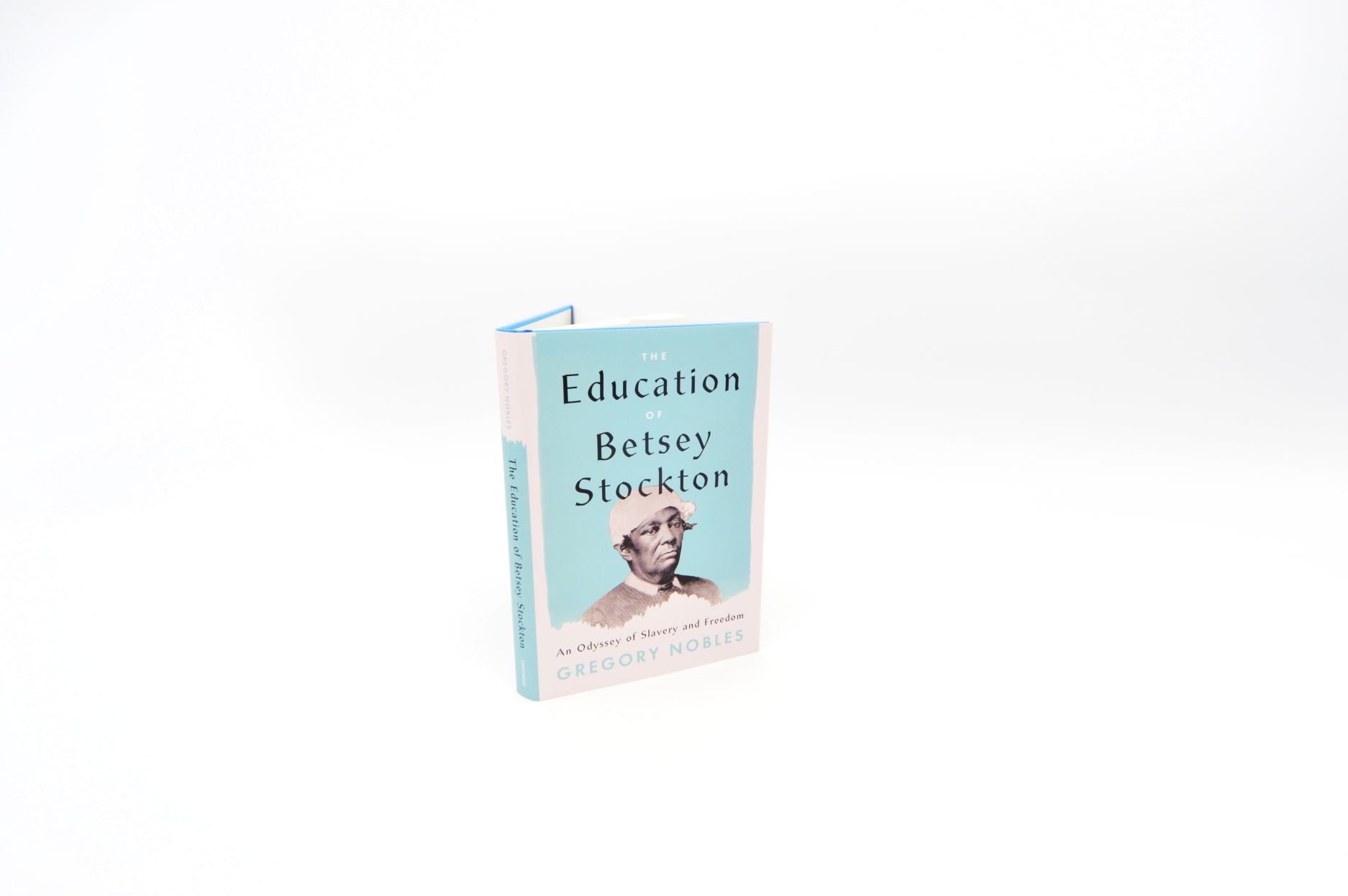 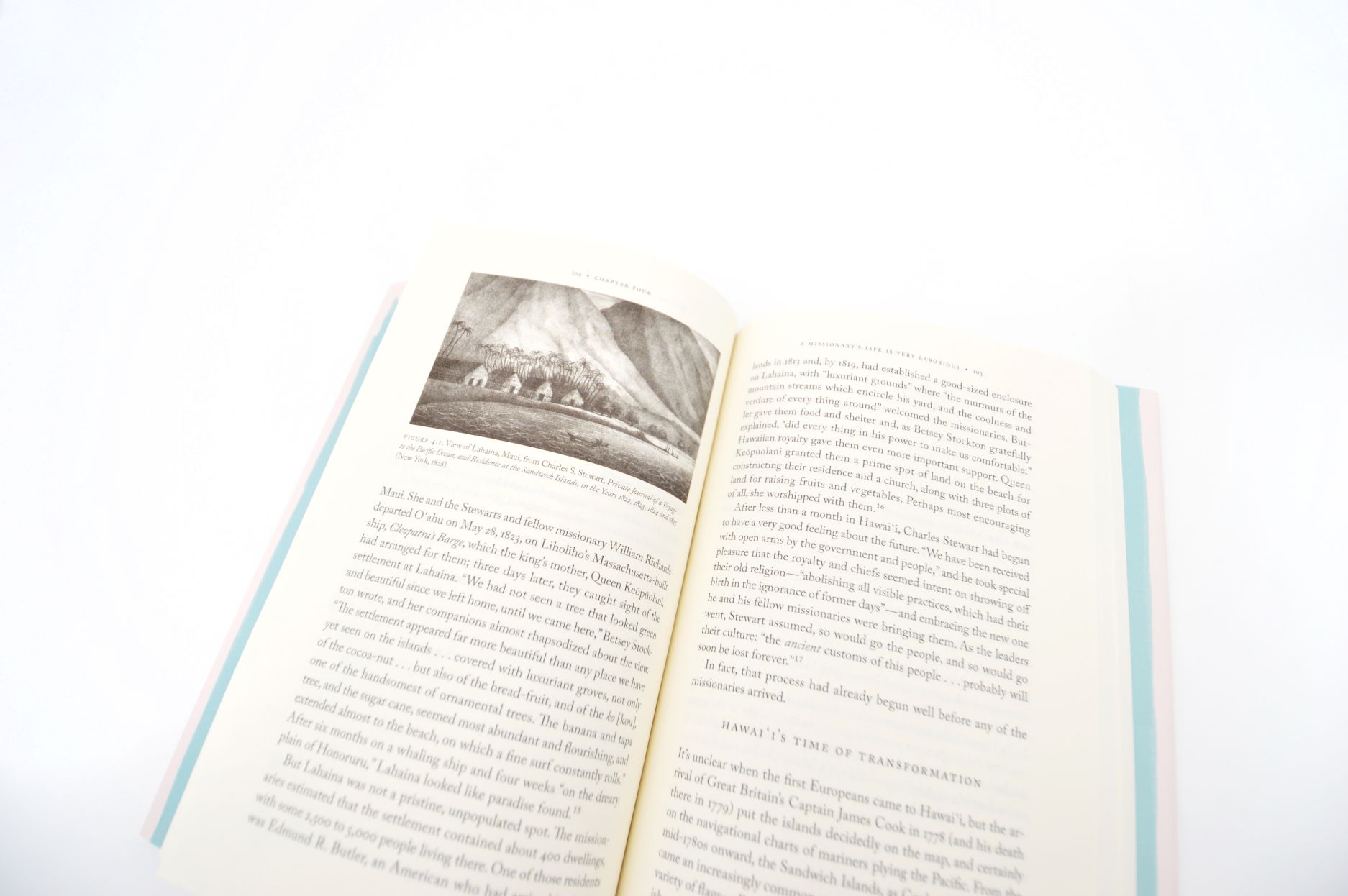 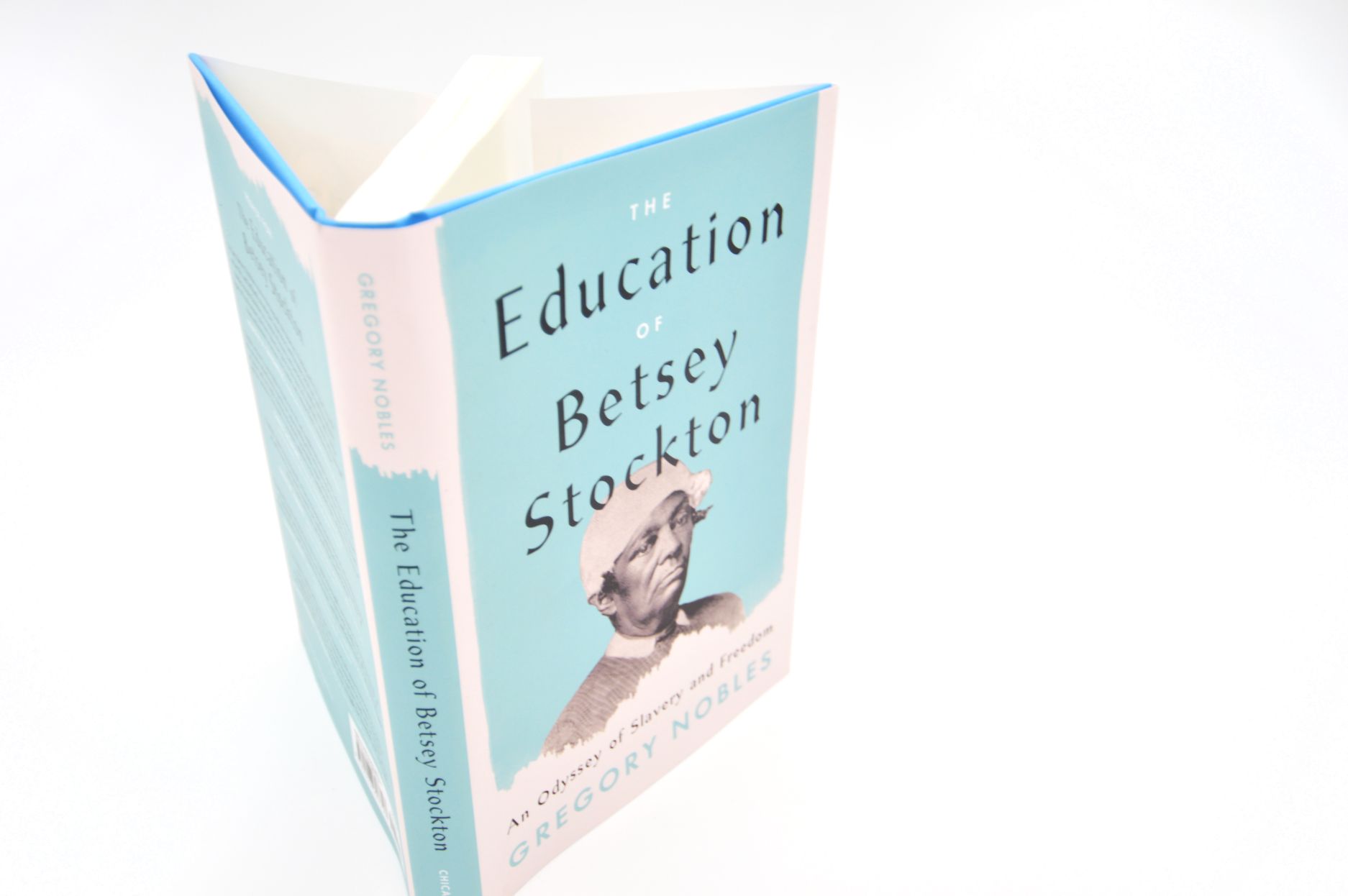 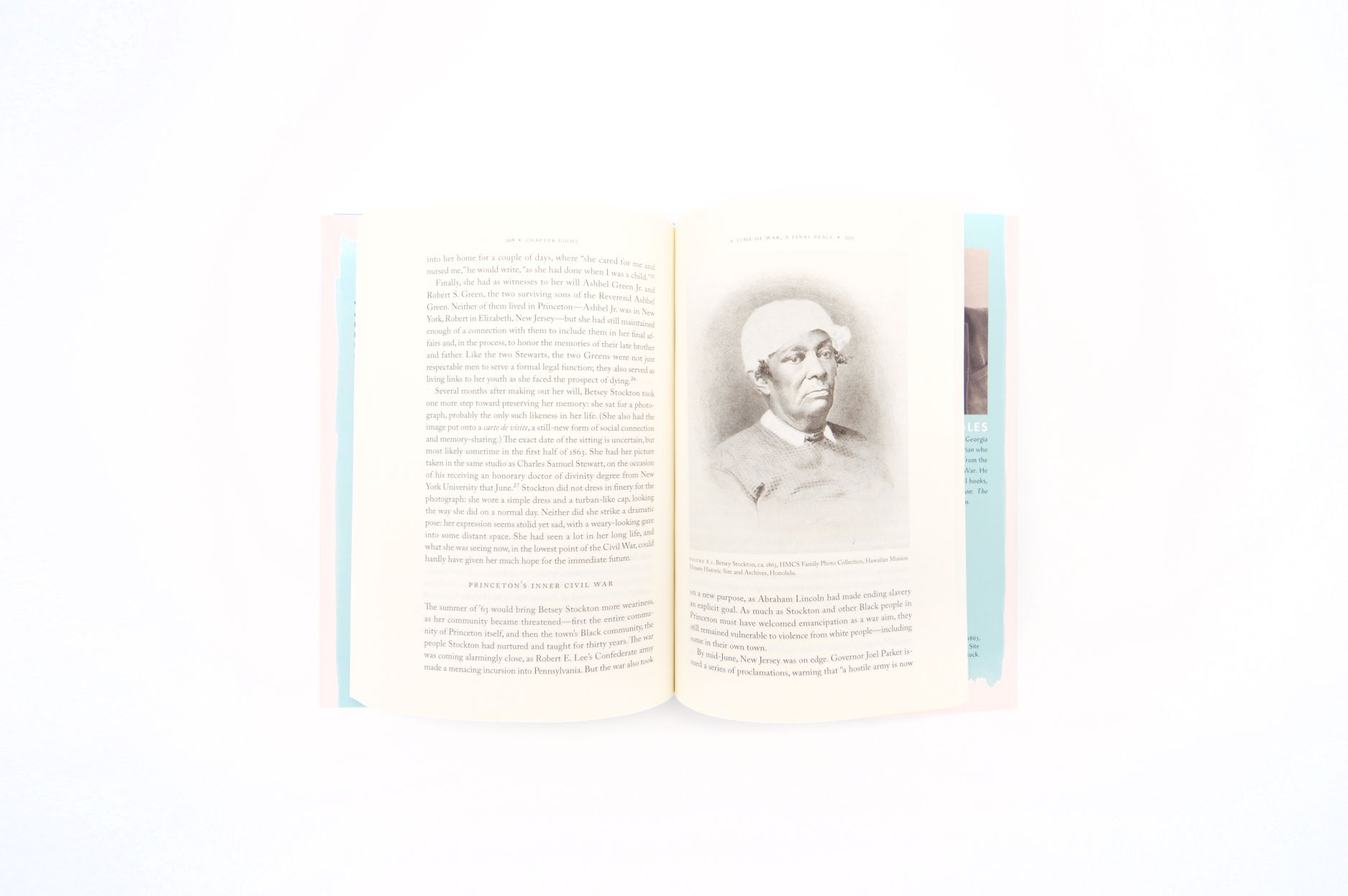