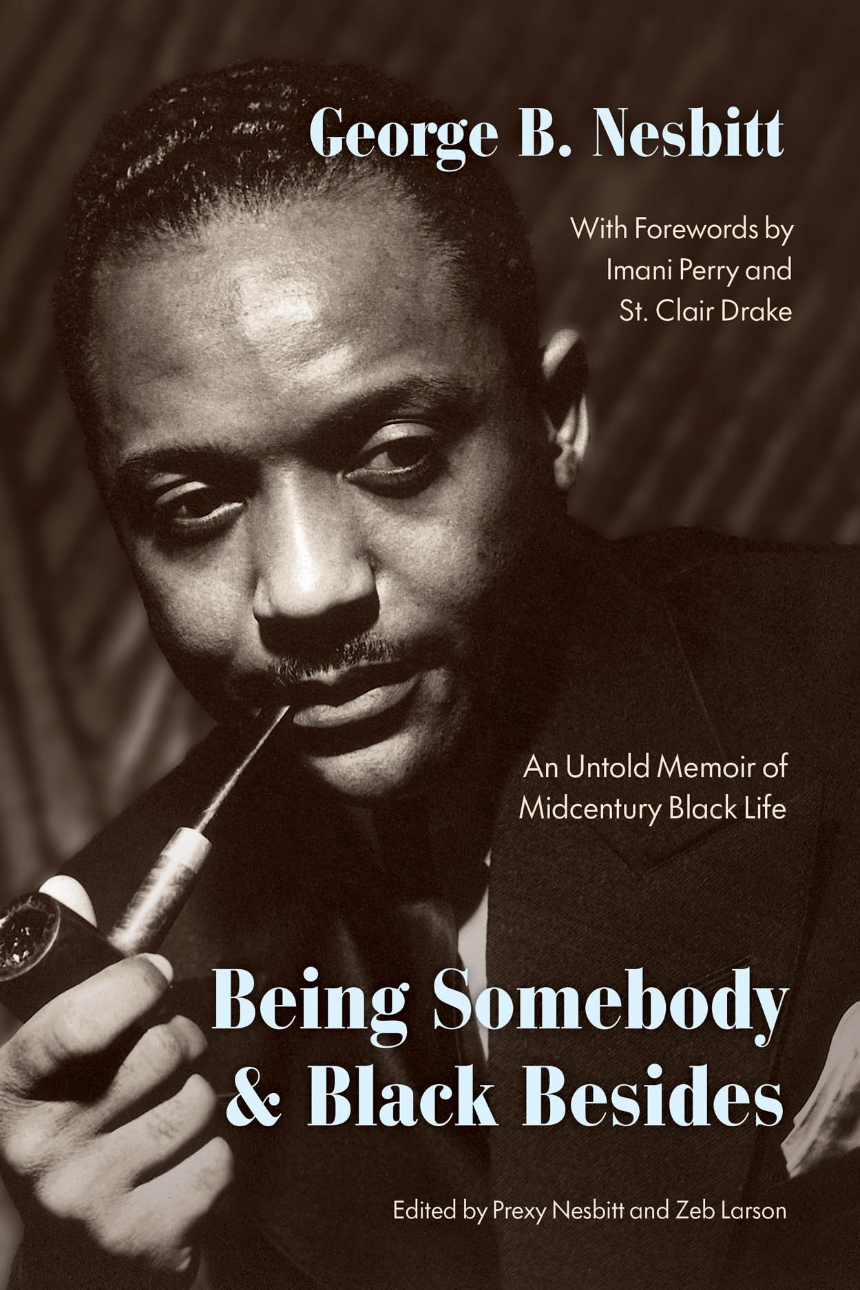 Being Somebody and Black Besides

Being Somebody and Black Besides

Edited by Prexy Nesbitt and Zeb Larson
With Forewords by Imani Perry and St. Clair Drake
An immersive multigenerational memoir that recounts the hopes, injustices, and triumphs of a Black family fighting for access to the American dream in the twentieth century.

The late Chicagoan George Nesbitt could perhaps best be described as an ordinary man with an extraordinary gift for storytelling. In his newly uncovered memoir—written fifty years ago, yet never published—he chronicles in vivid and captivating detail the story of how his upwardly mobile Midwestern Black family lived through the tumultuous twentieth century.

Spanning three generations, Nesbitt’s tale starts in 1906 with the Great Migration and ends with the Freedom Struggle in the 1960s. He describes his parents’ journey out of the South, his struggle against racist military authorities in World War II, the promise and peril of Cold War America, the educational and professional accomplishments he strove for and achieved, the lost faith in integration, and, despite every hardship, the unwavering commitment by three generations of Black Americans to fight for a better world. Through all of it—with his sharp insights, nuance, and often humor—we see a family striving to lift themselves up in a country that is working to hold them down.

Nesbitt’s memoir includes two insightful forewords: one by John Gibbs St. Clair Drake (1911–90), a pioneer in the study of African American life, the other a contemporary rumination by noted Black studies scholar Imani Perry. A rare first-person, long-form narrative about Black life in the twentieth century, Being Somebody and Black Besides is a remarkable literary-historical time capsule that will delight modern readers.

"If his story comes off unremarkable, that’s because he presented himself as unremarkable. Which is an odd thing to write. To say Nesbitt was ordinary is to suggest guts, humility and decency are ordinary."

“A part of a remarkable and accomplished family of Black educators, organizers, and crusaders, Nesbitt led an amazing life as a World War II veteran, civil rights lawyer, Harvard graduate, and official in the Kennedy administration. The story of his life offers a powerful glimpse into the issues of race, politics, and public policy over the course of the twentieth century. A compelling and thought-provoking life story and a wonderful addition to the growing genre of Black biography.”

“A fascinating memoir on par with Richard Wright’s Black Boy/American Hunger. Through Nesbitt’s engaging storytelling and revealing narrative, Being Somebody and Black Besides will remind people of the rich complexity of life in Black America during Nesbitt’s formative years that is seldom told or imagined today.”

“This is a searing portrait of an ordinary, yet extraordinary, middle-class Black man forced to endure the indignity of having to fight for fair play from people far less ‘civilized’ than he. A keen observer of the ‘ways of white folks,’ Nesbitt was a brilliant, sarcastic, insightful analyst of the color line, even as he willed himself to believe in his country and its ideals. This memoir reminds us how much we owe the early fighters for civil rights, who endured so many insults and injuries as they fought to widen opportunities for Black people and dismantle northern style Jim Crow. Nesbitt’s accounts of racism are unforgettable in their detail, anger, sheer absurdity, and casual cruelty.”

List of Illustrations
Foreword
Imani Perry
A Note on St. Clair Drake’s “Foreword”
Sandra Drake
Foreword to the George Nesbitt Manuscript
St. Clair Drake
A Note on the Manuscript
Prexy Nesbitt
Preface
1. Our Family’s Great Migration: Growing Up Black in the Shadow of the University
2. A Family Which Stayed Together
3. Learning to Be Somebody
4. The Comfort of My Negroness
5. Going to University: Labor and Learning
6. Town and Gown: The Difficulty of Navigating Two Worlds
7. Lawyer by Day, Redcap at Night: Union Organizing and Rabble Rousing
8. The Army and Its Apartheid: The Racial System in the War Years
9. The Ugly Specter of Race Discrimination
10. Poking at the Good, White Liberals: Discrimination Veiled and Rationalized
11. An Exceptional Family in the Lawndale Ghetto
12. The Future of Our People
Postscript
Acknowledgments

This book is about three generations of a stable but quite undistinguished Negro family and one of its members of no greater distinction. The entire lot lacks a single celebrity; no one of its members has been acclaimed as the first Negro to have done this or that of note. It also lacks the infamous as much as the famed. To dare the writing of a book about a Negro family that is neither celebrated nor sick surely requires explanation.

The effort was hardly escapable in the first instance. Not being burdened with children of my own but instead blessed with nieces and nephews who repeatedly urged me to set down for them the stories which I have from time to time told them, I have simply succumbed to their blandishments.
But in more truth, it has been conversations with several adult friends of mine which persuaded me to go to work. These pressures have had their way, despite my fear that well over two decades of expressing myself within the Federal bureaucracy have left me unfitted for writing readably, if ever the facility was at all mine.

Those discussions have taken this line, as I am able to reconstruct it.

The stories of my telling belong more widely than to the children of my brothers. For as the urgings of my young kinsmen suggest, they are of a generation whose members grope and yearn for comfort and clarity respecting the duality of their beings as American Negroes. They reach for a sense of continuity for themselves, to better accept themselves, and to know more of their particular past for strengthening their position in the future, as is most plain in so many of younger Negroes who rather frantically seek roots in the long, long ago, and as far away as Africa.

What it was like for poor Negro parents, a generation removed from slavery, to move from the rural South to the urban North, there to engage themselves and their children in incessant striving for self-esteem, respect from whites, and material well-being, is a part of that continuity. For this movement from the South has been a course steadily run by hundreds of thousands who represent both more of the plainer people of America still behaving in essentially a pioneering fashion and her darker people ever protestant against the withholding of the American promise and continuing, stubbornly to pursue it...
Northbound Negro migrants have not conquered forests nor crossed a barren expanse. They have traveled a route far worse, across rough mountain and frightful morass, to sight bright rainbows beyond stretches of quicksand, and meet with posted signs which both urge them on and forbid their passing. Along their way and at the journey’s end, they have encountered again and again an enemy worse than nature, an alliance of callous indifference and the nurtured evil of man against man. This has been pioneering. South to North, country to city, within the color line.

Many of these travelers have made it, survived and persisted, striven and succeeded, even according to the measures for those who are allowed the easier, white ways, free of restraints. Some of those who did not faint were once pointed to in community after community, with hidden guilt and show of pride, as “the hard-working, respectable ones.”

But today those Negroes on the move and who prove the will and strengths of a people, those called “upwardly mobile” and “the Negro middle class,” are nearly forgotten. The white community, distant and aloof, and with fear and trembling, looks upon what it has wrought in the great black ghettos of our cities and eases its guilt by seeing all caught within them as great, simple masses of helpless and hapless humanity. This is done even while elaborate means for the restoration and release of the hemmed in are proposed and somewhat implemented; while the protest and push continue, with increasingly frequent violent outbursts; while others still arrive, moving from subjugation to alien and hostile environs in search of greener pastures.

Worse than being lost in the eyes of those outside the ghetto, its respectable residents are spurned and all but spat upon by the youthful activists who shout “black power” on campus and in the streets, and by would-be Negro Messiahs. These young assertive ones say that their elders woo false gods and hate themselves. They see the struggle for racial equality as something commenced only a few months ago and tag their elders as “Toms.” Those institutions built by their fathers and grandfathers to carry forward the struggle are denied and disdained, despite the long proof of their capabilities.
Now black power ought to be celebratory too, as white power has so long been and so patently is. Moreover, the exercise of rights and responsibilities requires a sense of identity and self-esteem. And it is good to see the rebellious young ones engage themselves in aptness of self-celebration, the resurrection of which has been long due.

But the rub is that too many of the celebrants are drinking wantonly of the good medicine and having themselves a binge. They confuse ends with means and go on to make their color distinctiveness the end-all of their efforts. They would overcome white racism with black and seek race separation. By this token, they are entangled in their narcissism, seek insularity in a fluid and mobile society, and lose hold on the leverage which the American creed gives the Negro cause, while young whites and even a part of themselves reach for the goodness of life beyond abundant bread, and at the very hour when a brotherhood of plurality and equality presses for acceptance around a shrunken world.

To tell the story, across three generations, of one Negro family which came and persists in the pioneering path—of thousands upon thousands—whose weary ones were never celebrated, are too little understood and now questioned, when not altogether forgotten—may be helpful in the midst of the current turbulence of Negro-white relations.

In addition, though many, many are the Negroes who can truly tell stories which match and indeed excel those told here, my friends remind me that too few of such Negroes can bring themselves to tell them. They fear so to pinch themselves lest they waken from dreams more to their liking.

Lastly, the time and place for these stories perhaps strengthen their character. The nineteen hundred and twenties, thirties, and forties embraced the Great Depression, which was yet longer and deeper for Negroes. In those decades “the times were hard” indeed, to test the fiber of the poor and aspirant, especially the color-burdened among them. Negro-white relations in the Midwest, the setting for most of the narratives, were awkward and tricky, in some part harsh and rigidly separate but unmarked so, thus combining the worst of the essence of the color system in the South and the nature of that more prevalent in the East and the Far West.

For these reasons, then, I was persuaded to write this book.