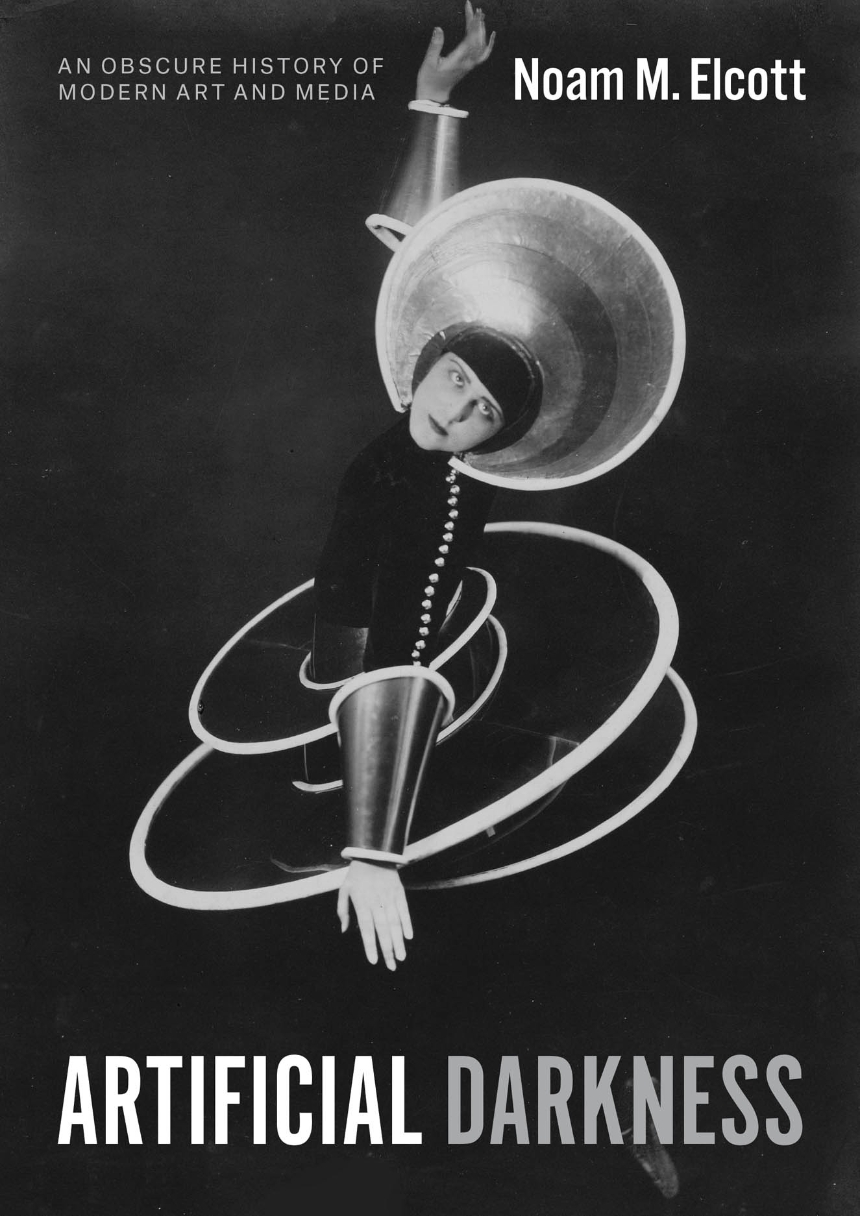 An Obscure History of Modern Art and Media

An Obscure History of Modern Art and Media

Darkness has a history and a uniquely modern form. Distinct from night, shadows, and artificial light, “artificial darkness” has been overlooked—until now. In fact, controlled darkness was essential to the rise of photography and cinema, science and spectacle, and a century of advanced art and film. Artificial Darkness is the first book to historicize and theorize this phenomenon and map its applications across a range of media and art forms.

In exploring how artificial darkness shaped modern art, film, and media, Noam M. Elcott addresses seminal and obscure works alongside their sites of production—such as photography darkrooms, film studios, and laboratories—and their sites of reception, including theaters, cinemas, and exhibitions. He argues that artists, scientists, and entertainers like Étienne-Jules Marey, Richard Wagner, Georges Méliès, and Oskar Schlemmer revolutionized not only images but also everything surrounding them: the screen, the darkness, and the experience of bodies and space. At the heart of the book is “the black screen,” a technology of darkness that spawned today’s blue and green screens and has undergirded numerous advanced art and film practices to this day.

Turning familiar art and film narratives on their heads, Artificial Darkness is a revolutionary treatment of an elusive, yet fundamental, aspect of art and media history.

“Groundbreaking and revisionist. . . . Artificial Darkness will be essential reading. . . Elcott’s study should speak to those who consider photography or film’s shadows and dark spaces in whatever period; to those who consider how bodies occupy, and are perceived to occupy, space; and indeed, to all scholars of the interplay between the visible and the invisible in visual culture.”

"Delving deep into the modern artifice of manufactured darkness, Elcott mines the mechanisms of constructed blackness and technologies of the invisible that developed in the late-19th and early-20th centuries into new means of expression and ambience in the visual and performing arts. . . . Highly Recommended."

"Elcott's account of artificial darkness takes the reader on an intriguing tour into the dark corners of early modernism, even if some of these recesses seem a little impenetrable. The book asks the existential, and perhaps nostalgic, question: 'How does one best live in a world of images?'"

“Elcott’s mining of what Roland Barthes declared the ‘cinematic condition’—the urge to disappear into an ‘anonymous, indifferent cube of darkness’—proves enlightening.”

"In Artificial Darkness Elcott delivers further inspiration to those experimentalists interested in early cinema as he adds new marvels to the canon beyond the magic lantern performances of the Phantasmagoria and the shadow plays performed at Le Chat Noir. To this reader's delight, the author also reveals the curious fact that occasionally shadows were even antithetical to certain early filmmaking techniques."

"Elcott’s work is of importance to anyone concerned for the future of art and media as a project which lies in developing an archaeology of the present out of the artifice of the past."

“A pioneering look at the phenomenon of artificial darkness as a controlled condition and at its applications in art and film.”

"Elcott’s reference to a vast collection of archival resources is a major strength of his study. His ability to weave through a dizzying array of data—architectural plans for Wagner’s theaters, blueprints for dark chambers, 17th century illustrations, silent films, artistic sketches, and others—reflects his intellectual ambition to trace the historical emergence of artificial darkness. Rather than focusing on specific components of cinema, Elcott draws our attention to recurring tropes—the disciplining of the body, physical dismemberment (of both the male and female bodies), and 'spacelessness'—across technologies of artificial darkness."

“[This] thorough text is beautifully illustrated with the ghosts conjured with magic lanterns in Étienne-Gaspard Robert’s 19th-century phantasmagoria, ‘Black Art’ shows from the 1890s when skeletons hovered in inky space, held aloft by hidden performers, and Georges Méliès’s early 20th-century films that conjured fantastic illusions through dark screens, such as making heads of actors disappear.”

“‘This century belongs to the light,’ exclaims Lázsló Moholy-Nagy in 1927 a propos photography and cinema, echoing other avant-garde artists from Frederick Kiesler to the Lumière brothers. Artificial Darkness shows that the inverse is also true, namely, that the age of light also belongs to darkness, and that, by delving into one, one finds oneself inexorably in the other.”

"Elcott’s book is essential reading for scholars of film and modernism, particularly those tired of essentialist or medium-specific discourses. Its beautiful illustrations, so well suited to black-and-white reproduction, appear as revelations of a forgotten and seductive past…Artificial Darkness argues compellingly for a suppressed history of the importance of darkness in its earliest days and points to its covert presence in our future."

“Brilliantly researched and stunningly argued. . . . The book . . . cut[s] across . . . diverse creative fields with the same elegance and erudition with which it takes on a whole range of academic disciplines.”

"Artificial Darkness is a book about cinema. It is not about film or even about projectors. It defines the cinematic as per its title, a dispositif of darkness that allows for transformation. . . . Elcott shows how art can turn technics to its advantage, by making room for play at the very heart of technics."

“Theoretically astute, historically rigorous, and visually precise, Artificial Darkness sets a standard for film and media scholarship while also making extremely significant and original contributions to fields such as art history, the history of science, and theater studies. Elcott’s research is subtle and meticulous, and his ability to embed and web his vast and complex archival discoveries into a swiftly moving and lucid narrative is truly impressive. This is a model of interdisciplinary work.”

“Elcott tells the story of what must remain invisible so that the optical and acoustic arts of modernity can exist. Artificial Darkness provides us with thrilling insights about the dark side of media history, demonstrating that images and sounds in the late nineteenth and early twentieth centuries were not related to formlessness as nothingness, but rather to darkness as technical form. From the moment you begin reading, you know that this is the book we have always needed. An astonishing expedition by an author whose scholarship and perspicacity offer unequaled opportunities, Artificial Darkness reveals the common background of modern art and media history.”

“Cinema consists of focused projected light, but Elcott shows that it craves the darkness. His investigation of the darkened theater, the role of darkness in creating optical magical illusion, and the modernist discovery of the anti-representational power of darkness show how cinema’s passion for darkness became a major figure of twentieth-century culture.”

“Breaking down the barriers between disciplines and mediums, Artificial Darkness constructs and questions an object that had never really been detected before: modern controlled darkness. Spanning photography, cinema, theater, and entertainment, this is a deep read and highly enlightening transdisciplinary journey into early modernist artistic practices.”