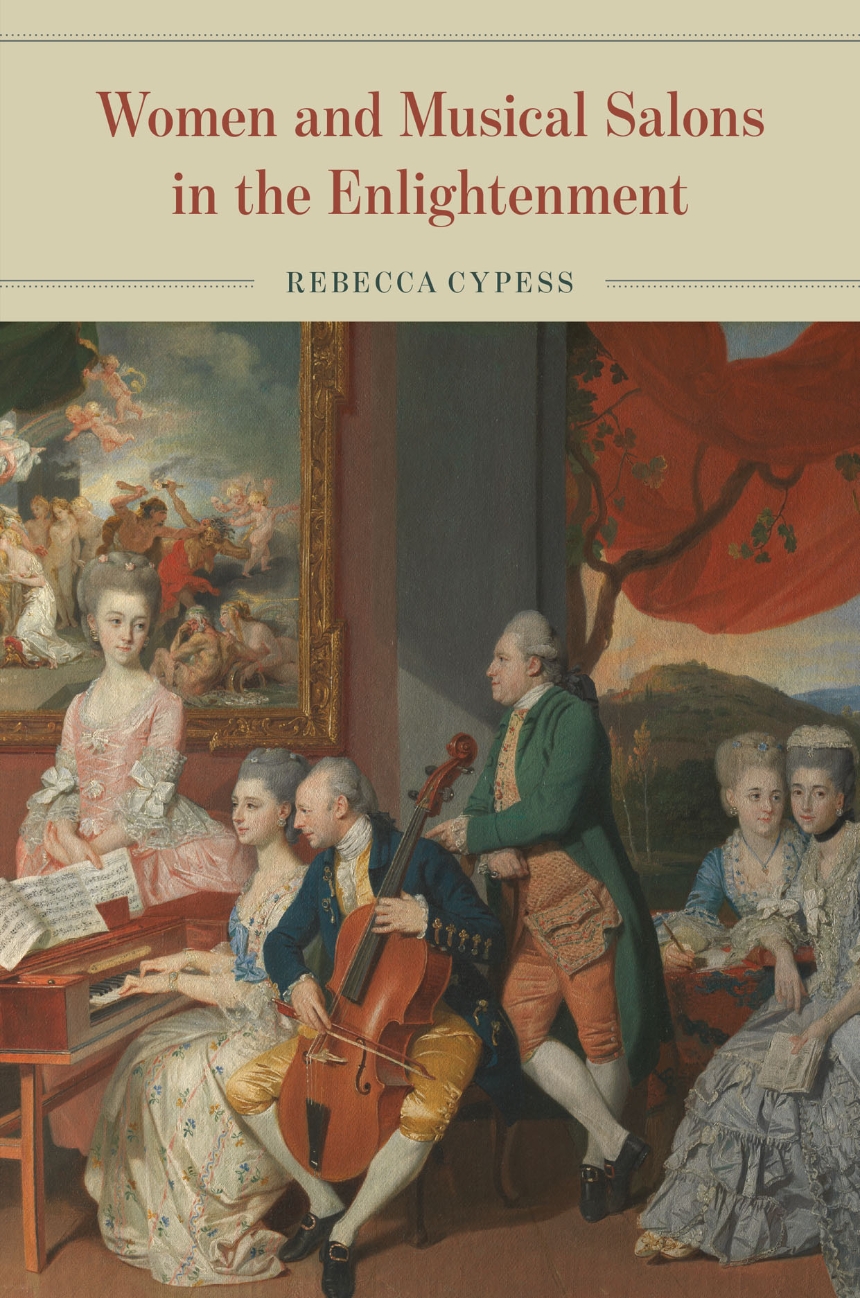 Women and Musical Salons in the Enlightenment

Women and Musical Salons in the Enlightenment

A study of musical salons in Europe and North America between 1760 and 1800 and the salon hostesses who shaped their musical worlds.

In eighteenth-century Europe and America, musical salons—and the women who hosted and made music in them—played a crucial role in shaping their cultural environments. Musical salons served as a testing ground for new styles, genres, and aesthetic ideals, and they acted as a mediating force, bringing together professional musicians and their audiences of patrons, listeners, and performers. For the salonnière, the musical salon offered a space between the public and private spheres that allowed her to exercise cultural agency.

In this book, musicologist and historical keyboardist Rebecca Cypess offers a broad overview of musical salons between 1760 and 1800, placing the figure of the salonnière at its center. Cypess then presents a series of in-depth case studies that meet the salonnière on her own terms. Women such as Anne-Louise Brillon de Jouy in Paris, Marianna Martines in Vienna, Sara Levy in Berlin, Angelica Kauffman in Rome, and Elizabeth Graeme in Philadelphia come to life in multidimensional ways. Crucially, Cypess uses performance as a tool for research, and her interpretations draw on her experience with the instruments and performance practices used in eighteenth-century salons. In this accessible, interdisciplinary book, Cypess explores women’s agency and authorship, reason and sentiment, and the roles of performing, collecting, listening, and conversing in the formation of eighteenth-century musical life.

“Women and Musical Salons in the Enlightenment is a fascinating, imaginative, and richly detailed study of musical salon culture in the late eighteenth century. As Cypess argues, while salon culture in general has been extensively explored, musical salons have not. The women at the salons’ centers have often been treated as accessories to the male ‘geniuses’ they have supported, their own musical productions and activities ignored. But Cypess takes a fundamentally new approach, attempting to reimagine and recreate the lived musical experiences of those social spaces. This is an important and compelling book, executed with verve and authority, carefully considered and argued, and richly presented.”

“Traditional narratives in musical historiography have tended to cast (male) genius-composers as protagonists, often overlooking the variety of influential roles played by women. This book is a much needed and timely corrective. With elegant prose that moves seamlessly from theoretical perspectives to music analysis to the author’s reflection on her own performance experience, Women and Musical Salons in the Enlightenment is encyclopedic in its mastery of the relevant literature from musicology and other disciplines. Accessible and engaging to diverse readerships, this book will certainly interest scholars from a variety of fields.”

List of Figures, Musical Examples, and Audio Examples
Acknowledgments
Introduction
1 Musical Salons as Liminal Spaces: Salonnières as Agents of Musical Culture
2 Sensuality, Sociability, and Sympathy: Musical Salon Practices as Enactments of Enlightenment
3 Ephemerae and Authorship in the Salon of Madame Brillon
4 Composition, Collaboration, and the Cultivation of Skill in the Salon of Marianna Martines
5 The Cultural Work of Collecting and Performing in the Salon of Sara Levy
6 Musical Improvisation and Poetic Painting in the Salon of Angelica Kauffman
7 Reading Musically in the Salon of Elizabeth Graeme
Conclusion
Bibliography
Index