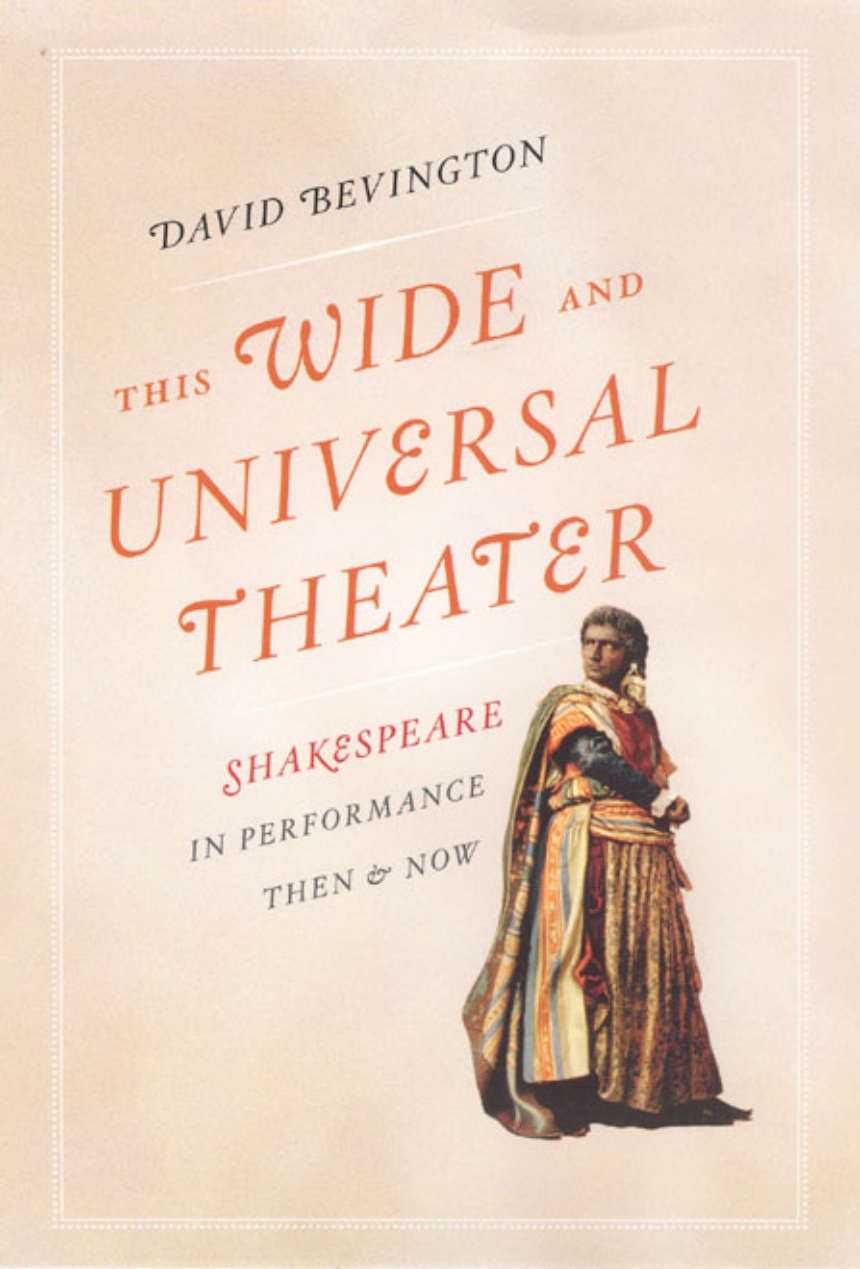 This Wide and Universal Theater

Shakespeare in Performance, Then and Now

This Wide and Universal Theater

Shakespeare in Performance, Then and Now

Many readers first encounter Shakespeare’s plays in a book rather than a theater. Yet Shakespeare was through and through a man of the stage. So what do we lose when we leave Shakespeare the practitioner behind, and what do we learn when we think about his plays as dramas to be performed?

David Bevington answers these questions with This Wide and Universal Theater, which explores how Shakespeare’s plays were produced both in his own time and in succeeding centuries. Making use of historical documents and the play scripts themselves, Bevington brings Shakespeare’s original stagings to life. He explains how the Elizabethan playhouse conveyed a sense of place using minimal scenery, from the Forest of Arden in As You Like It to the tavern in Henry IV, Part I. Moving beyond Shakespeare’s lifetime, Bevington shows the prodigious lengths to which eighteenth- and nineteenth-century companies went to produce spectacular effects, from flying witches in Macbeth to terrifying storms punctuating King Lear. To bring the book into the present, Bevington considers recent productions on both stage and screen, when character and language have taken precedence over spectacle. This volume brings a lifetime of study to bear on a remarkably underappreciated aspect of Shakespeare’s art.

“An eminent Shakespeare scholar and author, Bevington offers a concise, lucid, and unique overview of the history of Shakespeare in various modes of performance, from stage to film to television.”—Choice

“Even veteran Shakespeareans will profit from the varied reminders of how important performance and staging have always been to the interpretation of the plays.”—Renaissance Quarterly

“David Bevington, one of the most learned and devoted of Shakespeareans, has given us a highly useful study of the staging of the greater plays. The cognitive and imaginative interplay of language and action is conveyed with insight and joy.”

“David Bevington’s probing, spirited, and expansive study shows us acutely how Shakespeare’s plays make theater the engine of life, thought, power, fear, doubt, and love. Even more so, it lets us see just how strongly the plays themselves desire our imaginative collaboration in their relentless and ever-changing theatricality. Holding lightly his great knowledge of his subject, Bevington moves among a vast mosaic of examples, assembled from the long history of Shakespearean performance. He crosses easily and generously between early and late, between traditional and avant-garde, between stage and film, always with an eye for the telling detail, always reminding us of our ongoing, necessary conversation with the plays. This is a book to animate both our reading and our theater-going.”--Kenneth Gross, author of Shylock Is Shakespeare

“David Bevington’s new book belongs to a quite specific genre: the Shakespeare masterwork. He has drawn on more than four decades of experience to produce this genial companion to Shakespeare in performance, a trustworthy and comprehensive guide that will enhance the theatrical experience of a wide range of readers.”

“Informed by a lifetime’s play going and reflection, and ranging from Elizabethan inn yards to a singing bus driver in modern-day Chicago, This Wide and Universal Theater offers a compact yet comprehensive account of Shakespeare in performance. David Bevington’s masterly new book will be an indispensable resource for spectators, stage historians, actors and directors, film critics, and Shakespearians of every description. This is the ideal guide to the labyrinthine relations between the page and the stage, text and performance.”

David Riggs, author of The World of Christopher Marlowe

"An eminent Shakespeare scholar and editor, Bevington offers a concise, lucid, and unique overview of the history of Shakespeare in various modes of performance, from stage to film to television. . . . . This volume will be particularly interesting to nonspecialists. Recommended."

"Bevington’s accessible study, with its many examples of productions from Shakespeare’s time to the present . . . will be welcomed by general readers. . . . Even veteran Shakespeareans will profit from the varied reminders of how important performance and staging have always been to interpretation of the plays."

"Bevington makes interesting, nuanced and original points about staging and interpretation that reveal the dynamism and complexity of Shakespeare’s canon."

"This Wide and Universal Theater is especially valuable as an introduction to Shakespeare because it urges new Shakespeareans to think beyond the presumption that the drama will necessarily play out in verisimilar terms."

"[Bevington] uses the  thetrical metaphor to think about the plays’ meditations on the theater of the world. At stake, then, is the extent to which we can direct--our lives and worlds, as well as Shakespeare’s plays. . . . .[Bevington] has produced an elegant version of the argument that explores the idea both figuratively and literally."

"This lively, well-informed, and immensely enjoyable book by one of the most devoted and highly regarded of Shakespearians falls into that unique category: the Shakespeare masterwork. Clearly destined (and designed) to adorn the bookshelves of Shakespeare lovers, it contributes to the recent and ongoing shift in approach to Shakespeare’s plays from literary texts to dramas to be performed."

List of Figures
1 Actions That a Man Might Play: An Introduction
2 There Lies the Scene: Actors and Theaters in Late Elizabethan England
3 A Local Habitation and a Name: Stage Business in the Comedies
4 Thus Play I in One Person Many People: Performing the Histories
5 Like a Strutting Player: Staging Moral Ambiguity in Measure for Measure and Troilus and Cressida
6 The Motive and the Cue for Passion: Romeo and Juliet, Hamlet, and Othello in Performance
7 A Poor Player That Struts and Frets His Hour upon the Stage: Role-playing in King Lear, Macbeth, and Antony and Cleopatra
8 Insubstantial Pageant: Shakespeare’s Farewell to the Stage
9 This Falls Out Better Than I Could Devise: An Afterword
Further Reading
Index