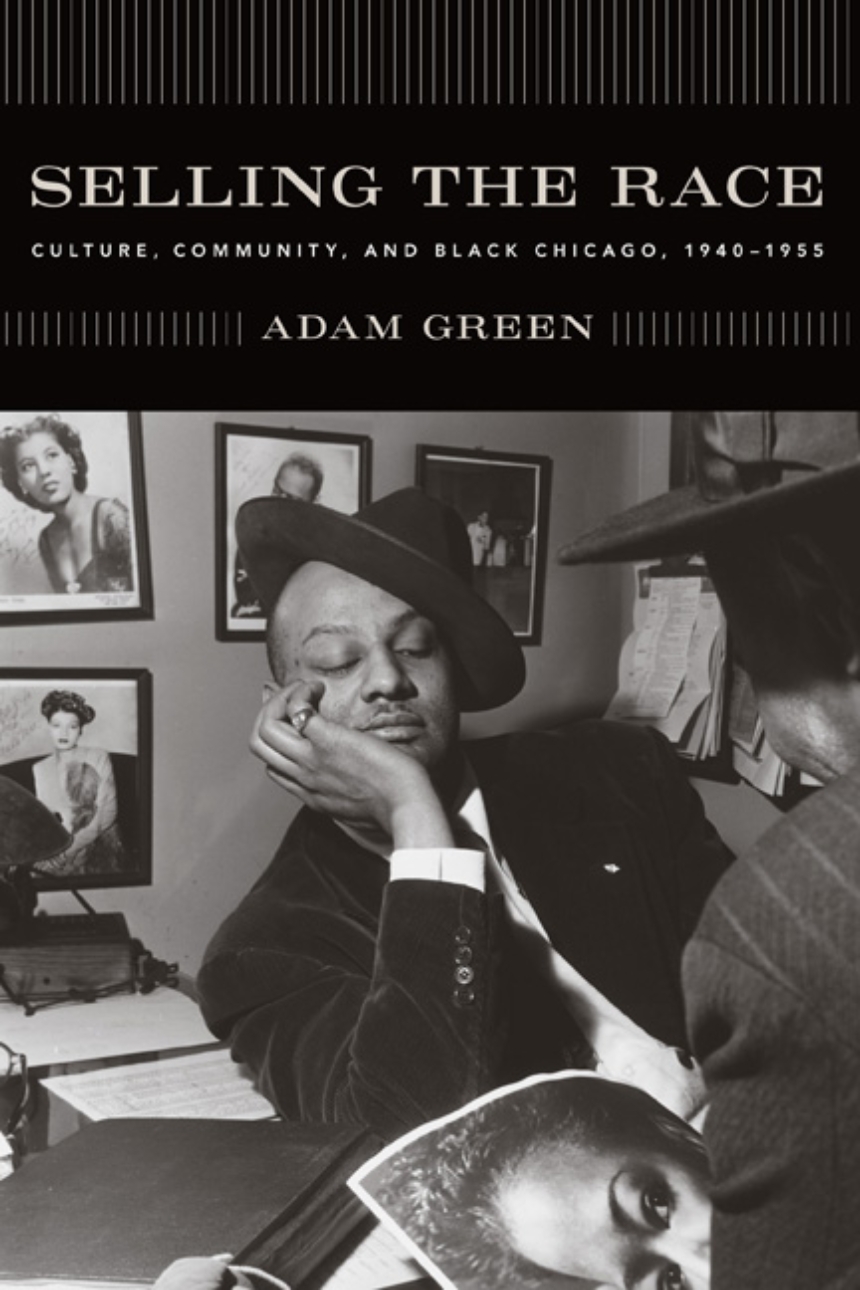 With twelve photographs by Wayne Miller

In Selling the Race, Adam Green tells the story of how black Chicagoans were at the center of a national movement in the 1940s and ’50s, a time when African Americans across the country first started to see themselves as part of a single culture. Along the way, he offers fascinating reinterpretations of such events as the 1940 American Negro Exposition, the rise of black music and the culture industry that emerged around it, the development of the Associated Negro Press and the founding of Johnson Publishing, and the outcry over the 1955 lynching of Emmett Till.

By presenting African Americans as agents, rather than casualties, of modernity, Green ultimately reenvisions urban existence in a way that will resonate with anyone interested in race, culture, or the life of cities.

“Brilliant. By looking at cultural work and the reconstitution of community in wartime and postwar black Chicago, Adam Green provides a window into the emergence of modern black urban life. Whether he’s exploring the fusion of sacred and secular blues or the writings of Chicago-school sociologists, Green beautifully demonstrates how the ‘cultural entrepreneurs’ of the period offered lessons for living, utopian dreams, a route to self-transformation, a means of survival, momentary challenges to white supremacy even as they sometimes reinforced black subordination, and the basis for a black economy.”<Robin Kelley, author of Freedom Dreams: The Black Radical Imagination>

“Selling the Race is the most important study of 1940s black Chicago to appear in sixty years. It will change ways of thinking and writing about black urban history.”<James Gregory, author of The Southern Diaspora: How the Great Migrations of Black and White Southerners Transformed America>

James Gregory, author of The Southern Diaspora: How the Great Migrations of Blac

“As an alternative to what he sees as the ‘hard empiricism’ in humanistic and social science research, Green emphasizes ‘the city as a site of creativity, rather than constraint.’ In doing so, he makes a series of significant contributions to knowledge that will influence broad interdisciplinary audiences in African American studies, urban and labor studies, public history, and museum studies. Rich and convincing, Selling the Race will also appeal to a wide range of scholars interested  in cultural policy and decision making.”<Joe William Trotter, Jr., Mellon Professor of History at Carnegie Mellon University and author of The African American Experience>

"Selling the Race is a terrific book, one that should have a long historiographical influence. . . . All social scientists and humanists will find Green’s book worthy of a serious and close reading."

"Much like the race sellers and buyers in his book, Green imagines a much wider horizon of innovative ideas that shaped a national race culture."

"From slavery’s origins in 1619 Virginia to the current crises of family disorganization, poverty, and violence, African Americans all too often appear as victims of U.S. society. Taking a different approach, Green (NYU) emphasizes the vibrant, positive cultural life of black Chicago in the years immediately preceding the rise of Martin Luther King Jr. and the nationally recognized Civil Rights Movement. . . . Recommended."

"An important additon to African American urban and business history."

"Green communicates forcefully the problems and possibilities posed by an era of tremendous social and political change and potent forces of resistance to those changes. This technique reflects Green’s broader effort to situate African Americans at the centre rather than at the margins of modernity, and, likewise, as agents in its manifestation rather than victims."

"The writing is crisp, the topics were chosen with great thought, the research is thorough, and the arguments are logical. This is a marvelous book, a must-read for everyone interested in the history of Chicago, as well as mid-century African American history."

Introduction: In Search of African-American Modernity

3 The Ends of Clientage

5 A Moment of Simultaneity