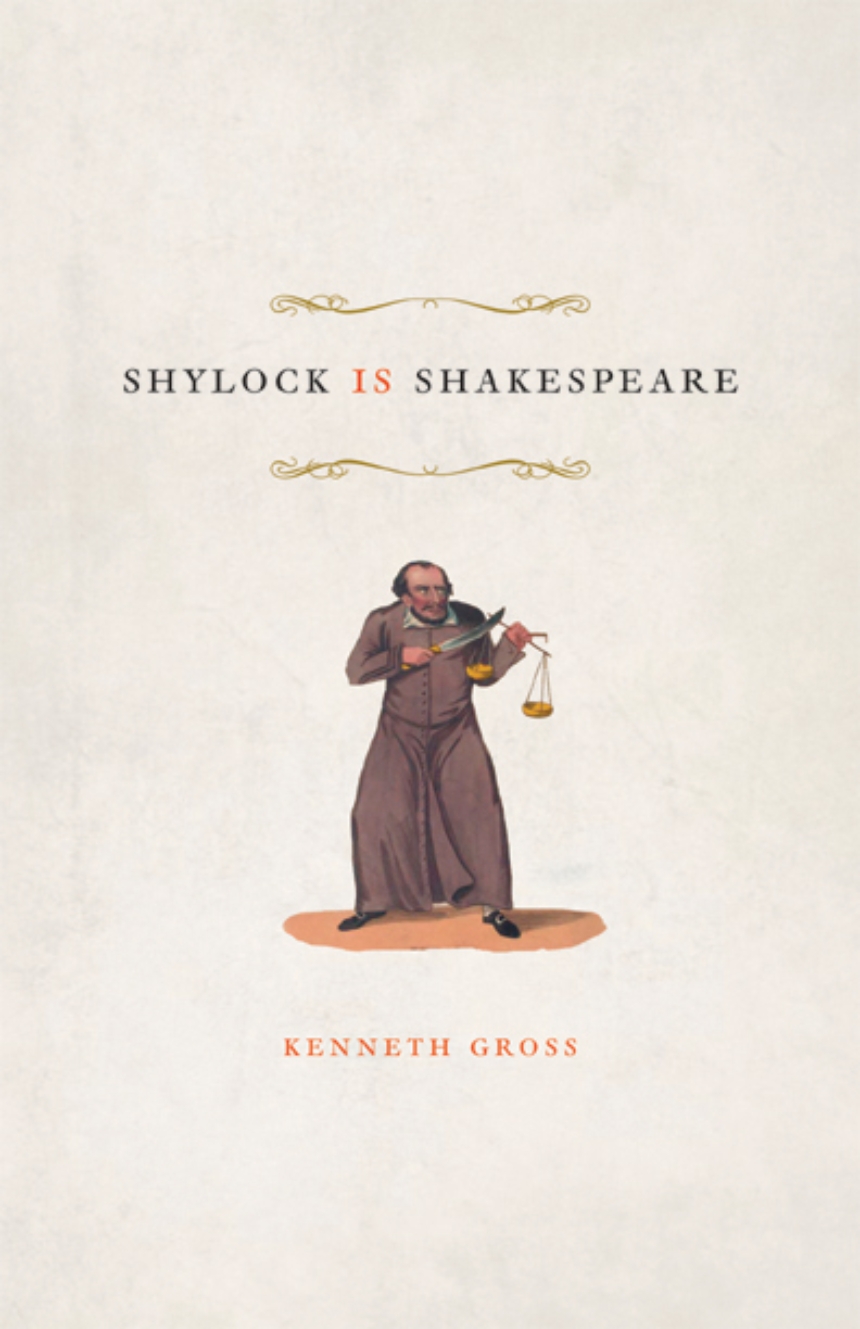 Shylock, the Jewish moneylender in The Merchant of Venice who famously demands a pound of flesh as security for a loan to his antisemitic tormentors, is one of Shakespeare’s most complex and idiosyncratic characters. With his unsettling eloquence and his varying voices of protest, play, rage, and refusal, Shylock remains a source of perennial fascination. What explains the strange and enduring force of this character, so unlike that of any other in Shakespeare’s plays? Kenneth Gross posits that the figure of Shylock is so powerful because he is the voice of Shakespeare himself.

Marvelously speculative and articulate, Gross’s book argues that Shylock is a breakthrough for Shakespeare the playwright, an early realization of the Bard’s power to create dramatic voices that speak for hidden, unconscious, even inhuman impulses—characters larger than the plays that contain them and ready to escape the author’s control. Shylock is also a mask for Shakespeare’s own need, rage, vulnerability, and generosity, giving form to Shakespeare’s ambition as an author and his uncertain bond with the audience. Gross’s vision of Shylock as Shakespeare’s covert double leads to a probing analysis of the character’s peculiar isolation, ambivalence, opacity, and dark humor. Addressing the broader resonance of Shylock, both historical and artistic, Gross examines the character’s hold on later readers and writers, including Heinrich Heine and Philip Roth, suggesting that Shylock mirrors the ambiguous states of Jewishness in modernity.

A bravura critical performance, Shylock Is Shakespeare will fascinate readers with its range of reference, its union of rigor and play, and  its conjectural—even fictive—means of coming to terms with the question of Shylock, ultimately taking readers to the very heart of Shakespeare’s humanizing genius.

“Shylock Is Shakespeare is a book whose risk-taking, even obsessive plunge into the living character of Shylock has succeeded in reinventing a mode of criticism long thought derelict and abandoned. Shakespeare’s power as a magician—a conjurer able to call forth and release spirits into the world—has rarely seemed as palpable or disturbing as it does in Kenneth Gross’s bold and original response.”

Stephen Greenblatt, author of Will in the World: How Shakespeare Became Shakespeare

“Most currently available books about Shylock keep the discussion of this Shakespearean character within the context of the play The Merchant of Venice and seek to illuminate how Shakespeare uses him within the dramatic unity of Merchant. Gross frees Shylock from the play and provides a wide-ranging, extended essay considering that character and his continuing existence in Western consciousness as revealed by his representation in post-Shakespearean performances, fiction, and criticism.”

“Anyone interested in how one of the most talented Shakespeareans at work today confronts the question ‘What next?’ will want to read his Shylock Is Shakespeare, as innovative and reckless a critical study to appear in a very long time. Like Shakespeare revamping old plots, Gross takes something unfashionable—Victorian character criticism—and turns it into something entirely new: a deeply considered, often-dazzling exploration of Shylock’s ‘singularity.’… Gross shows us—grippingly and often profoundly—what Shylock has come to mean in our time.”

"The mysteries surrounding Shylock naturally attract scholars. A couple of dozen modern books analyze his puzzling role in Shakespeare’s imagination. The latest, Shylock Is Shakespeare (University of Chicago Press), by Kenneth Gross of the University of Rochester, a virtuoso critic, identifies the moneylender with the playwright, making Shylock a character into whom the greatest of all writers poured his own ambivalence, anger and insecurity."

"Mr. Gross’s book is a concept-stuffed feat of Nabokovian ratiocination."

“In Kenneth Gross’s remarkable Shylock Is Shakespeare . . . we have a one-man commando assault on the critical orthodoxy of the past twenty years. . . . Shylock Is Shakespeare is compelling and honest. There should be much more literary criticism like it: bold, contentious, and speculative, it brims with ideas. Highly recommended.”

"Here we . . . have Gross providing a wealth of insight into Shakespeare’s first problem comedy, leaving us valuable analysis that flies well beyond the rampant references and convinces with its breadth and authority."

"A one-man commando assault on the critical orthodoxy of the past twenty years...Shylock Is Shakespeare is compelling and honest. There should be much more literary criticism like it: bold, contentious, and speculative, it brims with ideas. Highly recommended."

"Kenneth Gross’s Shylock Is Shakespeare is at once an intimate record of one scholar’s reading experience and a wide-ranging interpretive engagement with one of Shakespeare’s most troubling plays and its afterlife in literature and thought....If Shylock is Shakespeare, Gross unabashedly finds himself in both. This book is intimate without being personal. Gross sounds the depths of his own affiliations with his subject matter, but he never, as it were, wears his circumcised heart on his sleeve. Rather than dip into anecdote or memoir, Gross invites us to enter the generous and thoughtful circle drawn by nothing more or less than the frank and assiduous unfolding of the interpretive process."

"Gross’s suggestions that Shylock serves as a mirror for Shalespeare, Portia, and Antonio are compelling, as are his central chapters on Shylock in his cultural context. Those interested in Shylock’s reception will especially want to read this book."

Preface
A Note on Texts
1. Beginning
2. The Heart of It
3. Shylock’s Nothing
4. The House of the Three Caskets
5. Exchanges
6. Shylock Unbound
7. Are You Answered?
8. A Theater of Complicity
9. The Third Possessor
10. Conversion
11. Golems and Ghosts
12. A Dream
13. Esthétique du Mal
14. Operation Shylock
Notes
Index