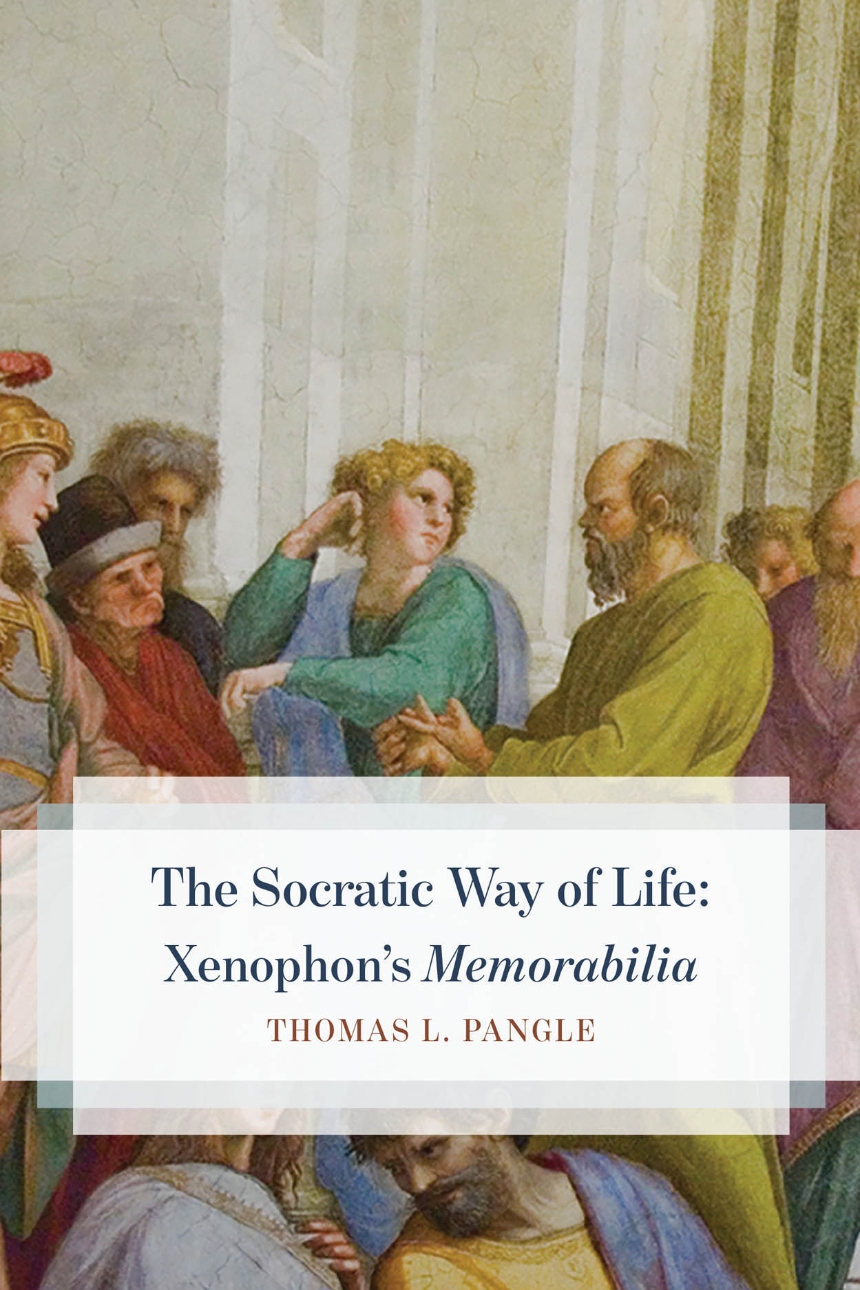 The Socratic Way of Life

The Socratic Way of Life

The Socratic Way of Life is the first English-language book-length study of the philosopher Xenophon’s masterwork. In it, Thomas L. Pangle shows that Xenophon depicts more authentically than does Plato the true teachings and way of life of the citizen philosopher Socrates, founder of political philosophy.
In the first part of the book, Pangle analyzes Xenophon’s defense of Socrates against the two charges of injustice upon which he was convicted by democratic Athens: impiety and corruption of the youth. In the second part, Pangle analyzes Xenophon’s account of how Socrates’s life as a whole was just, in the sense of helping through his teaching a wide range of people. Socrates taught by never ceasing to raise, and to progress in answering, the fundamental and enduring civic questions: what is pious and impious, noble and ignoble, just and unjust, genuine statesmanship and genuine citizenship. Inspired by Hegel’s and Nietzsche’s assessments of Xenophon as the true voice of Socrates, The Socratic Way of Life establishes the Memorabilia as the groundwork of all subsequent political philosophy.

“Pangle’s work on Xenophon’s Memorabilia is, quite simply, magisterial. His interpretation builds on scant existing scholarship, bringing Xenophon’s work into a much wider frame of scholarly reference. The Socratic Way of Life sheds new light on the long-standing dispute concerning the authentic teaching of the historical Socrates as distinct from the Socrates portrayed in Plato’s dialogues. This could have little short of revolutionary implications for the study of classical philosophy.”

“This book is in all respects a scholarly exemplar. Pangle’s The Socratic Way of Life is a distinct contribution to the revival of interest and respect for Xenophon through its focus on the Socratic writings. Pangle’s philosophical commentary demonstrates that Xenophon knew what he was about, that he possessed a wry sense of humor, and that, when he seems deficient, it is because he has his tongue firmly in his cheek. It is in Pangle’s power to open up this work as a field of scholarship, and the time is ripe.”

Thomas L. Pangle’s book on this single work of Xenophon draws on long familiarity with it that has to be respected. It enables him in his introduction to relate Xenophon and his Socrates to more recent figures who loom large in political discourse. It helps him to see the importance of things that Xenophon does not say in Socrates’ defense (pp. 37-41) or elsewhere, trying to tease out Xenophon’s own views from some of his silences. He finds relevant not only what Xenophon (unlike Plato) chooses not to mention (p. 80) but also what he mislabels (monologue as ‘dialogue’, p. 92). He notices many twists that are unusual in this work and therefore invite us to notice them that much more, while also drawing attention to some expression that is used for the first time in it (e.g. an exclamation with Zeus’s name at 2.2.13, 84). Pangle is an experienced and observant reader of Xenophon.

Polis, The Journal for Ancient Greek and Roman Political Thought

With this rich monograph on Xenophon’s Memorabilia —equally remarkable for its loyalty to Strauss and its originality—Pangle has definitively established himself as Strauss’s greatest living student. . . . Pangle’s reading of Hercules’ choice between Virtue and Vice (Memorabilia  ii 1) leads to a revealing contrast between ‘Heroic and Socratic Virtue’, one that valorizes ‘his joyful study, together with friends, of great old books.' The attention Pangle gives to pictorial representations of this famous passage in the notes (241, 253-254) points to another excellence of his book: it is filled with reliable erudition. Particularly interesting is Pangle’s attention to Shaftesbury (116, 196, 203, 218, 238-241, 253, and 256), but useful references to Telemann (229 and 241), Handel (229 and 241), Proust (245), Benjamin Franklin (219n22), and John Adams (241n97), constitute a welcome step . . ... Unusual too is Pangle’s attention to philology; he has inspected the manuscript tradition and it shows (220, 221, 226, 229-230, 232- 235). But what shows even more is his attention to what he calls ‘conventional’ (233n29 and 237n63), i.e., non-Straussian, scholars. More charitable than he could otherwise have been, Pangle is in dialogue throughout with Xenophon’s non-Straussian expositors, including currently active scholars like Louis-André Dorion and Vivienne Gray (see Index entry on 283). . . . I will be hoping that the new orthodoxy will follow Pangle’s example by illuminating, even if only by contrast, the kind of ‘noble generosity’ (111) that made Xenophon’s Socrates intent on benefiting others, even if that meant dying καλῶς.

Pangle’s book is especially impressive in its portrayal of the Xenophontic Socrates’ understanding of the divine and the role of the gods in the city. It is difficult to overstate the importance to philosophy’s understanding of itself of the differences here between Plato’s Socrates and Xenophon’s. Pangle is to be applauded for grappling with this subject. May Zeus grant us more edifying commentaries from Pangle in this vein—and more work on Xenophon by any and all newcomers wishing to read him not just as a statesman but as a philosopher.

As Pangle argues, Xenophon’s non-Socratic works establish the authority of his Socratic writings, and these gentlemanly types helped to perpetuate Socrates’s legacy. Further, as Pangle points out, Xenophon’s distorted image of Socrates consciously undertook to counterbalance Plato’s distortion of Socrates. Xenophon’s missing presentation of a conversation between Plato and Socrates in Book III "is one of Xenophon’s more explicit indications that his oeuvre as a whole presupposes, and complements, the Platonic oeuvre" (SWL, 139). Pangle’s footnote indicates the agreement on this point of famed classicist John Burnet, and we find in this context Xenophon’s sole mention of Plato (III.6.1). Again, we can see why Pangle turns to Xenophon; he is guided, at least in part, by the recognition that Xenophon’s account of Socrates presupposes Plato’s, serves to counterbalance it, and thus facilitates arriving at a genuine view of the philosopher.

The Review of Politics

Part One: Socrates’s Innocence of the Injustices for Which He Was Executed

2.         Socrates Was Not Guilty of Corrupting the Young
Answering a Nameless Accuser’s Charge That Socrates Promoted Contempt for the Athenian Regime and Laws
Starting to Explain His Association with Critias and Alcibiades
In What Sense Virtue Is Knowledge
The Big Differences between Critias and Alcibiades
Critias
Alcibiades
Explaining the Teaching of Socrates That Wisdom Is the Title to Rule
Transition to Part 2 of the Memorabilia

Part Two: Socrates’s Active Justice, as Benefiter of Others

3.         How Socrates Benefited through His Piety and His Self-Mastery
His Teaching on Praying and Sacrificing
Socrates’s Self-Mastery vs. Xenophon’s Sexual Indulgence
Socrates’s Teaching on Divine Providence
Socratic Self-Mastery vs. Conventional Self-Mastery
The Virtue That Socratic Self-Mastery Serves
Socrates’s Discouragement of Boasting
His Teaching of Self-Mastery for the Sake of a Life Dedicated to Politics
The Setting of the Dialogue
Self-Discipline as Crucial to Education for Ruling
Why One Must Seek to Be One of Those Who Rule
Why the Active Political Life Is the Good Life
Heracles’s Choice
4.         How Socrates Benefited in Regard to Family and Friends
Attending to His Son and Wife
Attempting to Reconcile Feuding Brothers
Socrates on the Value of Extrafamilial Friendship
Promoting Reflection on One’s Own Worth as a Friend
Socrates on the Power and Problem of Friendship among Gentlemen
How Socrates Helped Friends in Serious Economic Difficulties
A Socratic Revolution in a Desperate Friend’s Household
Socrates’s Advice to a Fellow Economic Misfit
A Glimpse of Socrates’s Own Economic Art
Extending His Economic Art
5.         How Socrates Benefited Those Reaching for the Noble/Beautiful (Kalon)
His Playful Teaching of Noble Generalship
Interpreting Homer on the Virtue of a Good Leader
On the Goal Aimed at by a Noble Commander
Assimilating Military-Political Rule to Household Management (“Oeconomics”)
His Earnest Teaching of Noble Generalship
On What a Statesman Needs to Know
Socrates Exhorting to a Career as a Democratic Leader
How Is the Beautiful/Noble Related to the Good?
The Virtues as Noble/Beautiful
Socrates as Arbiter of the Beautiful/Noble in Art
The Profitable Beauty of Socrates’s Soul, Reflected in Comic Allegory
Exhorting to the Cultivation of Beauty of Physique
Promoting Everyday Self-Mastery and “Living Decorously”