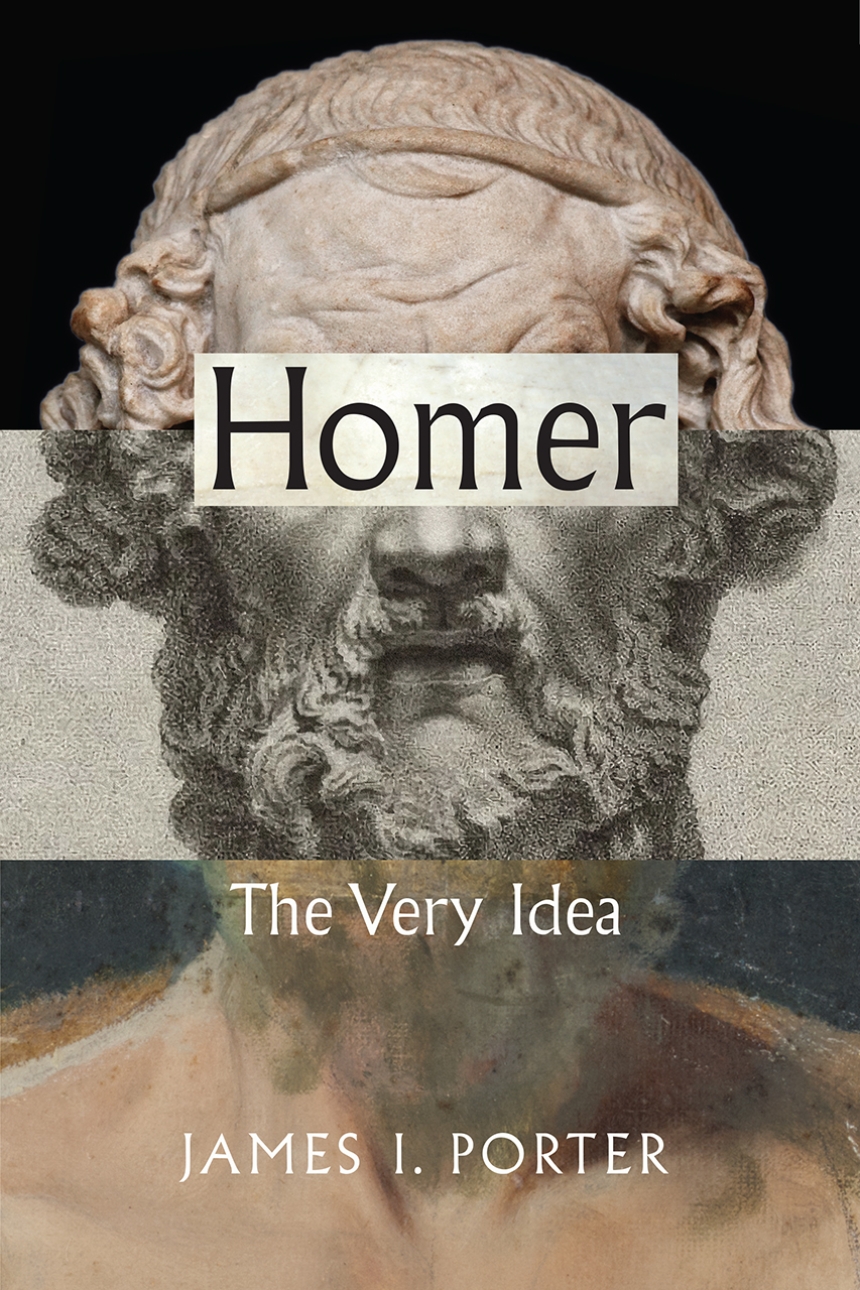 The story of our ongoing fascination with Homer, the man and the myth.

Homer, the great poet of the Iliad and the Odyssey, is revered as a cultural icon of antiquity and a figure of lasting influence. But his identity is shrouded in questions about who he was, when he lived, and whether he was an actual person, a myth, or merely a shared idea. Rather than attempting to solve the mystery of this character, James I. Porter explores the sources of Homer’s mystique and their impact since the first recorded mentions of Homer in ancient Greece.

Homer: The Very Idea considers Homer not as a man, but as a cultural invention nearly as distinctive and important as the poems attributed to him, following the cultural history of an idea and of the obsession that is reborn every time Homer is imagined. Offering novel readings of texts and objects, the book follows the very idea of Homer from his earliest mentions to his most recent imaginings in literature, criticism, philosophy, visual art, and classical archaeology.

"In this spirited book, Porter identifies not one but three Homeric questions. First, when, how and by whom were the Iliad and the Odyssey actually composed (that is, the Homeric Question as we traditionally know it)? Second, how should we interpret the poems? And third, how does Homer work as a figure of the imagination? . . . One example of Porter’s brilliance is his discussion of Homer’s blindness. Neither historical fact nor unquestioned assumption, 'blindness' was a way for ancient readers to discuss the extraordinary vividness of Homeric epic – a quality that made an impression also on later readers."

"Porter presents intriguing instances of writers who, in thrall to the beauty of Homer’s poetry, either celebrate or deflect from the actual war carnage described therein. Porter’s book provides not only a valuable introduction to the enigma of Homer and the roads taken down the centuries to solve—or at least better understand—that enigma, but also a number of challenging and eye-opening readings of the texts themselves. . . .  I found that reading Homer through Porter’s eyes was sometimes most enjoyable precisely when our viewpoints diverged. This, in itself, is a sign of a rich and engaging book."

"Here is a learned tome worth careful examination. Porter presents an original, focused, intelligent analysis of Homer's oeuvre. The style is breathtaking and the range truly impressive. . . . Summing Up: Recommended."

"Brisk and energetic. Students (and teachers) will find much here to provoke thought and argument about the literary, cultural and moral issues, which find expression and exploration via the pages of this most enigmatic of poets."

"Porter’s is a fascinating and erudite book with a penchant for striking prose."

"Another book about Homer? No, says [Porter], this one is quite different: he will tease out the sources of Homer’s mystique down the ages, examining the fascination he has cast over posterity since the first recorded references in ancient Greece. There will be nothing about Homer the poet or his supposed historical existence, about the poems’ literary worth or the circumstances of their composition, certainly nothing about heroic society, simply the pursuit of a concept, an idea, a cultural invention of successive ages called ‘Homer’."

"Porter’s book takes us across nearly three millennia of grappling and wrestling with the idea of Homer—who he was, whether he existed, his deification by his admirers, his de-mythologizing by his critics, and his eternal recurrence again and again and again across space and time."

"Porter is an exceptional scholar. Clear, intelligent, and filled with fascinating examples, this book is contemporary while reaching beyond the fashionable, and it will arouse a good deal of discussion."

“Homer: The Very Idea is an extraordinary quest in search not of the elusive Homer but of Homer’s elusivity.  Porter takes up Homer as a phenomenon repeatedly produced over millennia, in different times and places, as the gauzy point of origin for cultural value that refuses to vanish.  By critically engaging the idea of Homer, he delves deep into the very logic of the tradition’s value.  An inimitable tour de force of transhistorical spectrology.”

Brooke Holmes, author of Gender: Antiquity and Its Legacy

“This book is a reckoning with who or what we understand Homer to be and how we have reinvented him for our own ends. Porter makes clear the impossibility of Homer both as a concept and as a person, revealing him as the illusion of a perfectly formed whole that has been kept alive for millennia, a ghost in the machine, a phantom both alive and dead. As a leading scholar in dismantling assumptions about the classical past, Porter has written an original, compelling, and eye-opening book that will generate excitement and admiration.”

Alex C. Purves, author of Homer and the Poetics of Gesture

"This book is the culmination of Porter's work of two decades on Homer as the history of an idea... it demonstrates the immense potential of the poems and their author to
create new ideas according to the perspectives of their readers."

Note on Translations and Abbreviations
List of Illustrations
Timeline
1. Why Homer?
2. Who Was Homer?
3. Apotheosis or Apostasy?
4. What Did Homer See?
5. Why War?
Acknowledgments
Notes
Further Reading
Works Cited
Index

The Iliad and the Odyssey have been required reading in Western culture from its beginnings, despite the mystery surrounding their date and authorship and despite their obvious blemishes—the inconsistencies, repetitions, and anomalies—which have led to their impeachment as products of a single mind. We might as well ask with Gilbert Murray, the future Regius Professor of Greek at Oxford writing in 1907, “Now why is it that the Iliad is a good poem when it has so many of the characteristics of a bad one?”

All the uncertainties about Homer and his poems notwithstanding, their place in the Western cultural imagination has been unrivaled. Indeed, as secular texts with no pretensions to revealed truth, and yet conferred with nearly biblical stature already in antiquity, the Homeric poems have enjoyed a status in world literature that is absolutely unique. Not even Vergil, the great poet of the Romans and of later Latin readers, could escape the long shadow cast by his Greek predecessor. Though it was Vergil, the most Christian-friendly of the pagan poets, who escorted Dante most of the way to Paradise, it was Homer, not Vergil, whom Dante called “the sovereign poet” (Omero poeta sovrano) without ever having read a word of him.

How can we account for Homer’s standing and his enduring attraction? Whatever the answer, approaching the question will involve confronting the monumentality of his two poems, less their quality as great works of literature than their role as cultural icons, as signifiers of value, and as landmarks in the evolving relationship between literature and culture. To look at Homer in this way is to consider his place—the very idea of Homer—in the culture wars of antiquity and modernity. But it is also to recognize that the meaning and value of Homer (provisionally, the poet and the poems that have been attributed to him) are the products of a particular kind of fascination: they have been a compulsive and productive source of culture since antiquity. This achievement is all the more remarkable given the fact that nothing whatsoever is known about Homer. Who he was, when and where he lived and died, what he sang or wrote, whether he was blind, and so on—all this is unknown and, alas, unknowable.

The oddity of the situation cannot be emphasized enough. An absolute chiffre, Homer is a peculiar kind of object in the history of culture inasmuch as he enters the cultural record as an object that is lost from the moment it is found. And with each new attempt to “discover” the true Homer again, that primordial loss is repeated as well. The real problem, then, is not just that Homer is an unknown object whose identity is clouded over with endless uncertainties, nor even that Homer may never have existed as an identifiable person, as is widely believed today. It is that Homer is an impos­sible object, an entity who only becomes tangibly real and actual in the very failed effort to grasp him. A Homer like this, about whom nothing is known, cannot help but produce a sense of puzzlement, not simply at the level of his texts but in the very conception of Homer as the author of his poems. “Homer” simultaneously names this predicament of logic and conceals it from view, which has ensured that Homer continues to exist even if the person never did, but also that he is continually enlisted in causes that were never his, like a blank check.

A simpler way of putting the problem is to recognize that Homer’s status—his monumentality and his value—was never a self-evident given: it was not bestowed on him from birth. On the contrary, it had to be repeatedly struggled over, argued, established, and reestablished over time, which is to say that the monument of Homer had to be built and rebuilt from one generation to the next. And because it did, Homer has for the most part appeared not only as the oldest poet in the West but also, paradoxically, as the youngest. The usual claims that Homer possesses a value that is innate, inviolable, and everlasting cannot escape the irony that those very same claims are not themselves inviolable and everlasting. Not only have they proved eminently contestable, as will become abundantly clear in this book, but they have also assumed radically different meanings as historical circumstances change. Looking at Homer from this angle, as an object of cultural production rather than as a producer of literature, is an invitation to study the intellectual and cultural history of value, and that is one way in which I would like the following pages to be understood. Homer will in a sense merely be our guide.

A perspective like this can throw a valuable light on the often circuitous logic of culture. Logic or illogic? For leaving aside the nearly self-evident truism that what is finally at stake in the contests over Homer are the identities of the various combatants involved, surely Homer’s greatest attraction has to lie not in his greatness, however that comes to be defined, but in his utter mystery and unreachability. Consequently, if there is any value at all to Homer, it has to be sought in the very indeterminateness of his definition and his unrivaled mystique, which have provoked intense reflection and served as an instrument of endless debate, contest, and redefinition. One suspects that in settling on Homer as an object of contention, the ancients and the moderns have made a rather telling choice, one that ceaselessly authorizes the imaginative work of culture. Culture is not just an arena of contestation. It is a deviously calculating and self-enabling  thing.

But while Homer offers clues to many of the larger processes by which the core values of a culture come to be shaped and revised, he also has a particular story to tell that is all his own. The question of how the idea of Homer came to signify differently in different cultural settings over long stretches of time involves a history that is both rich and at times utterly bizarre. And so this book is meant to expose some of the marvelous strangeness that the problem of Homer has produced over the millennia and continues to produce today. 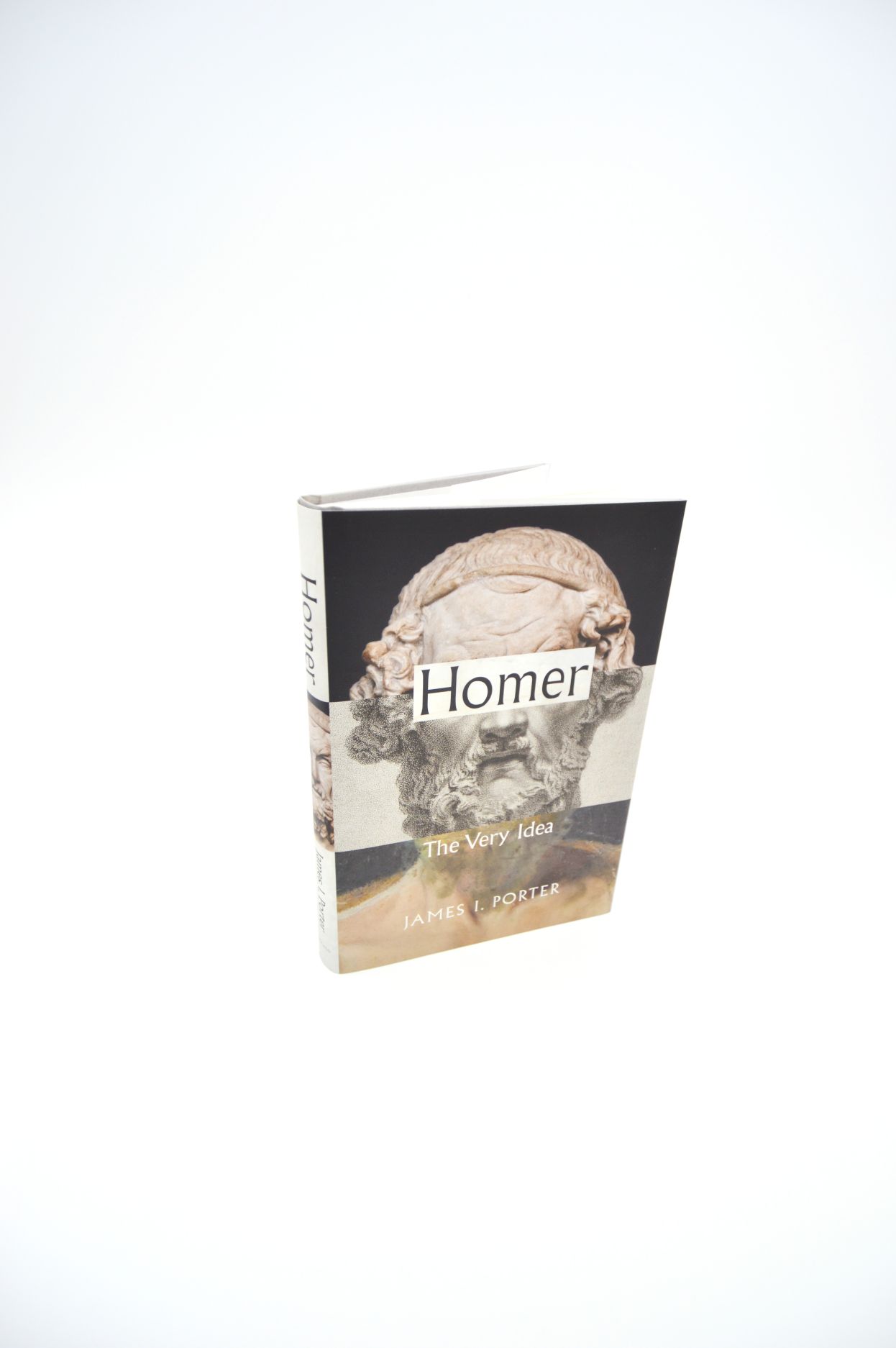 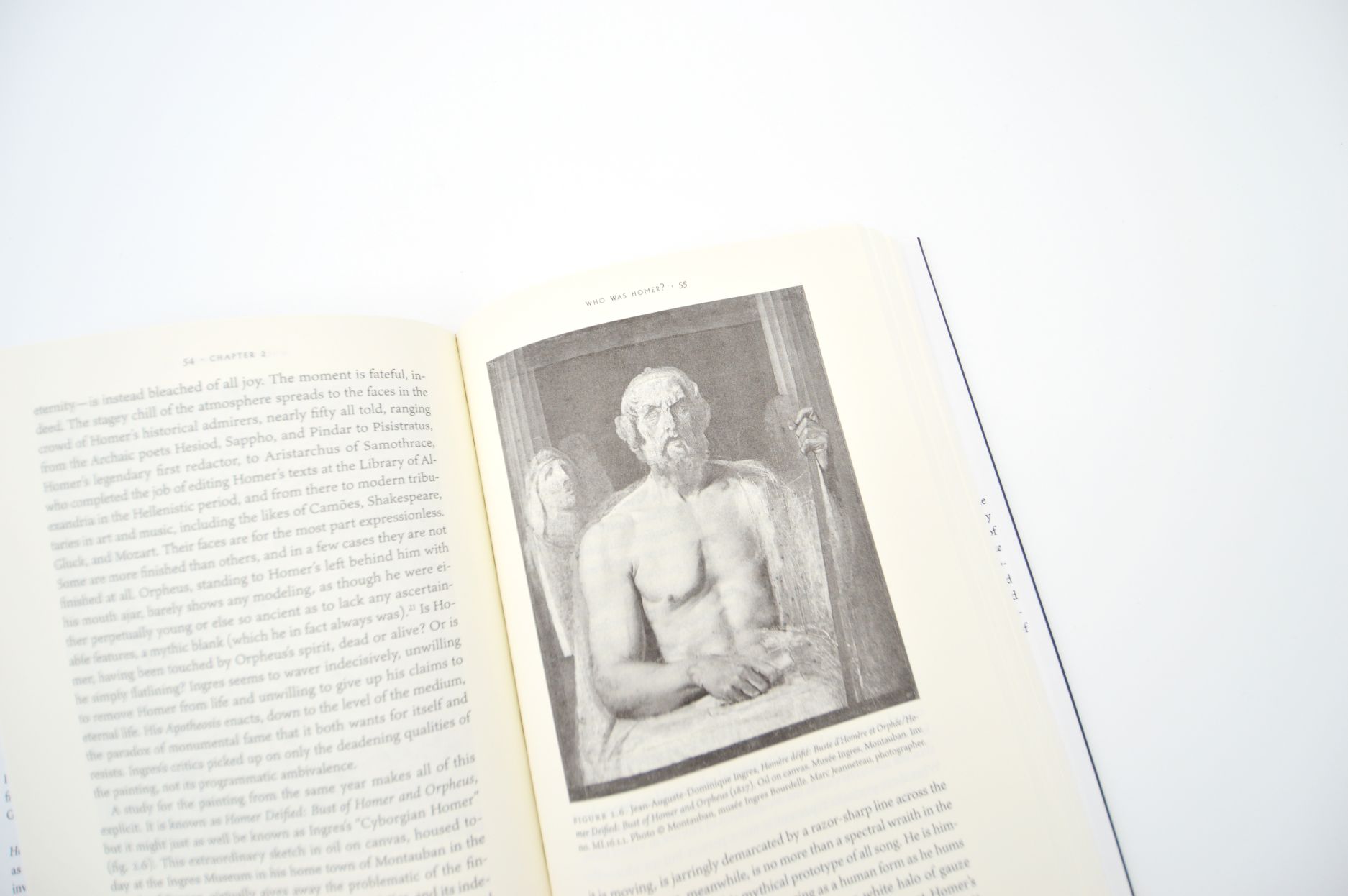 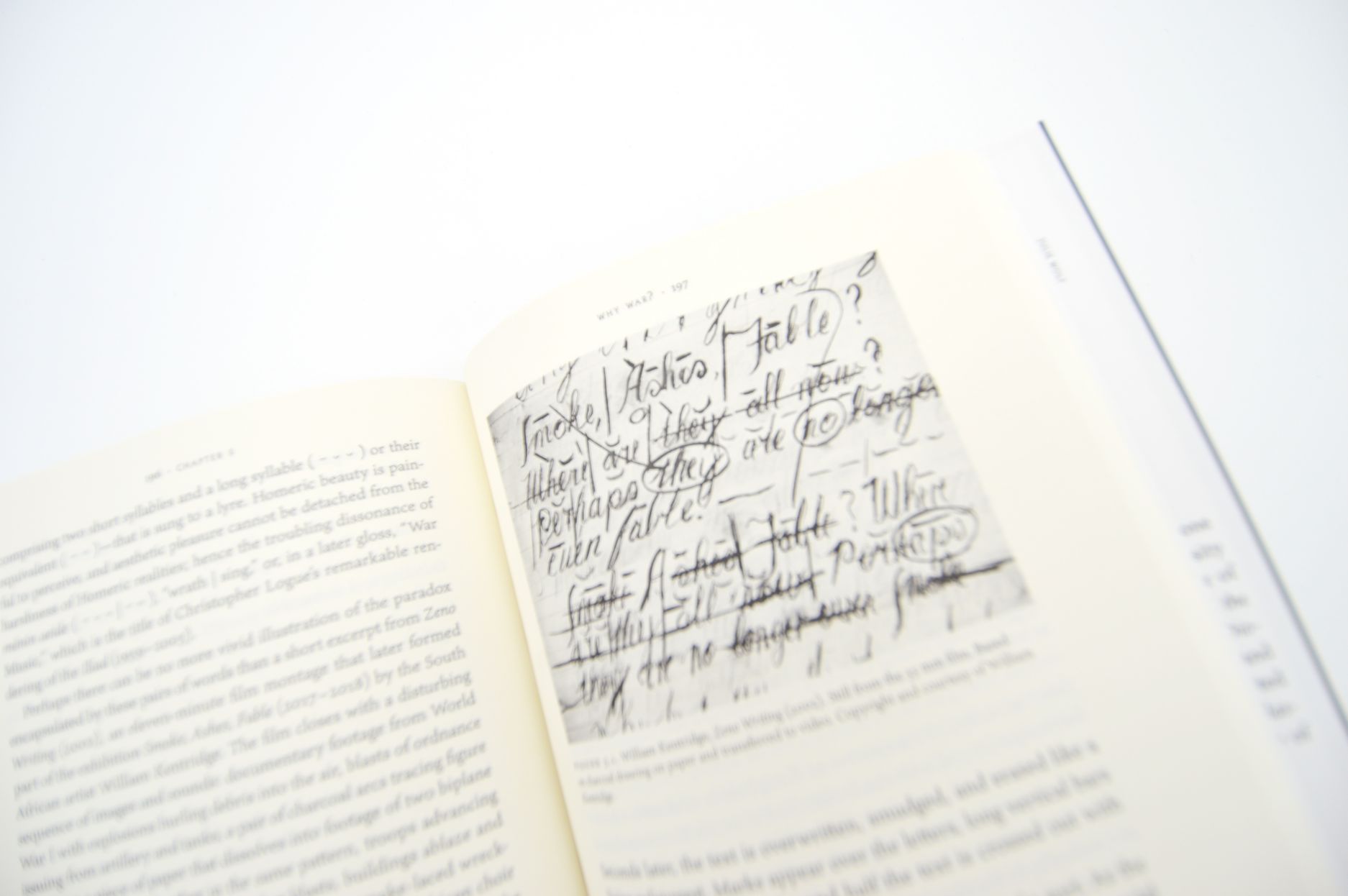 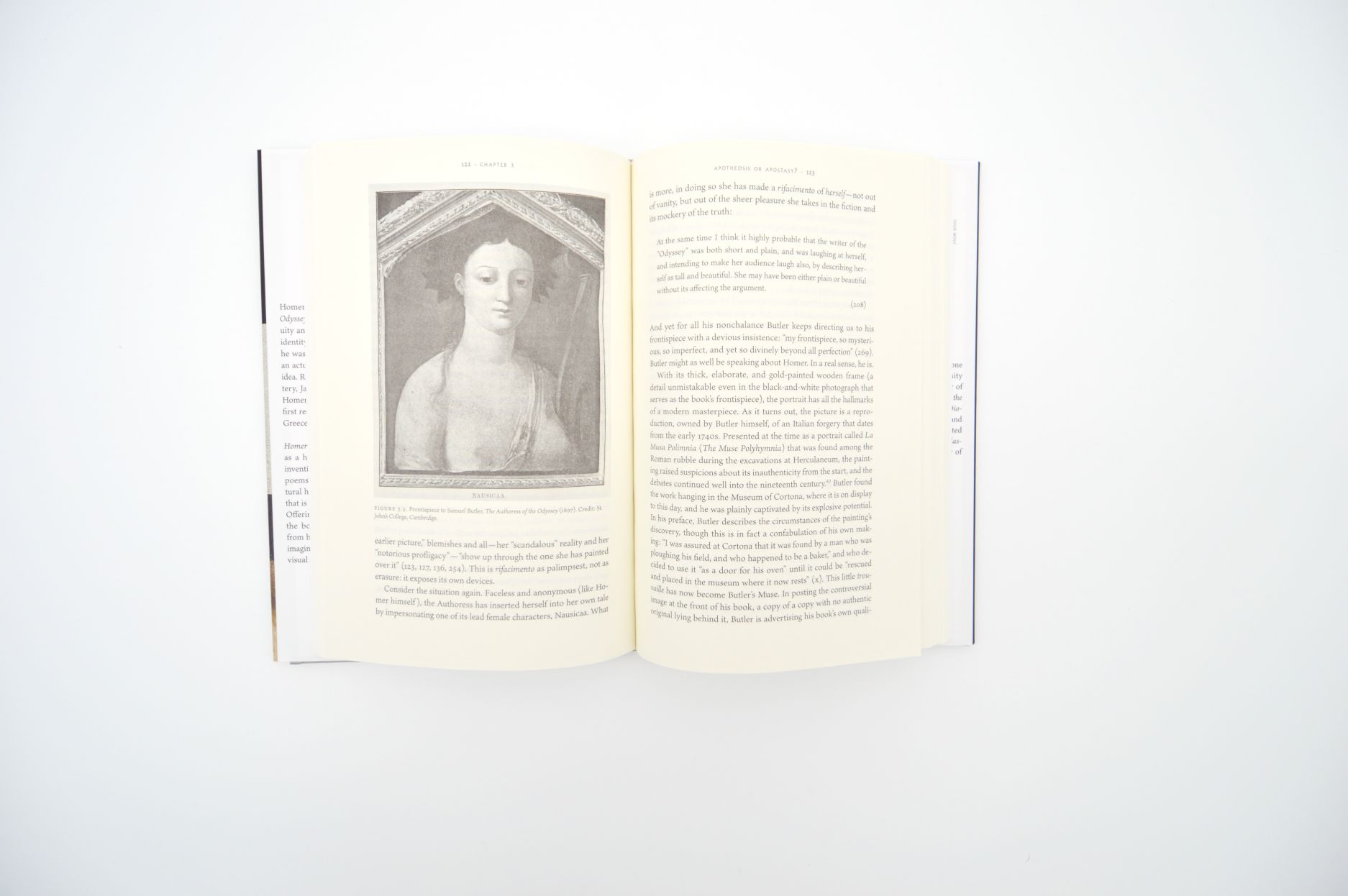 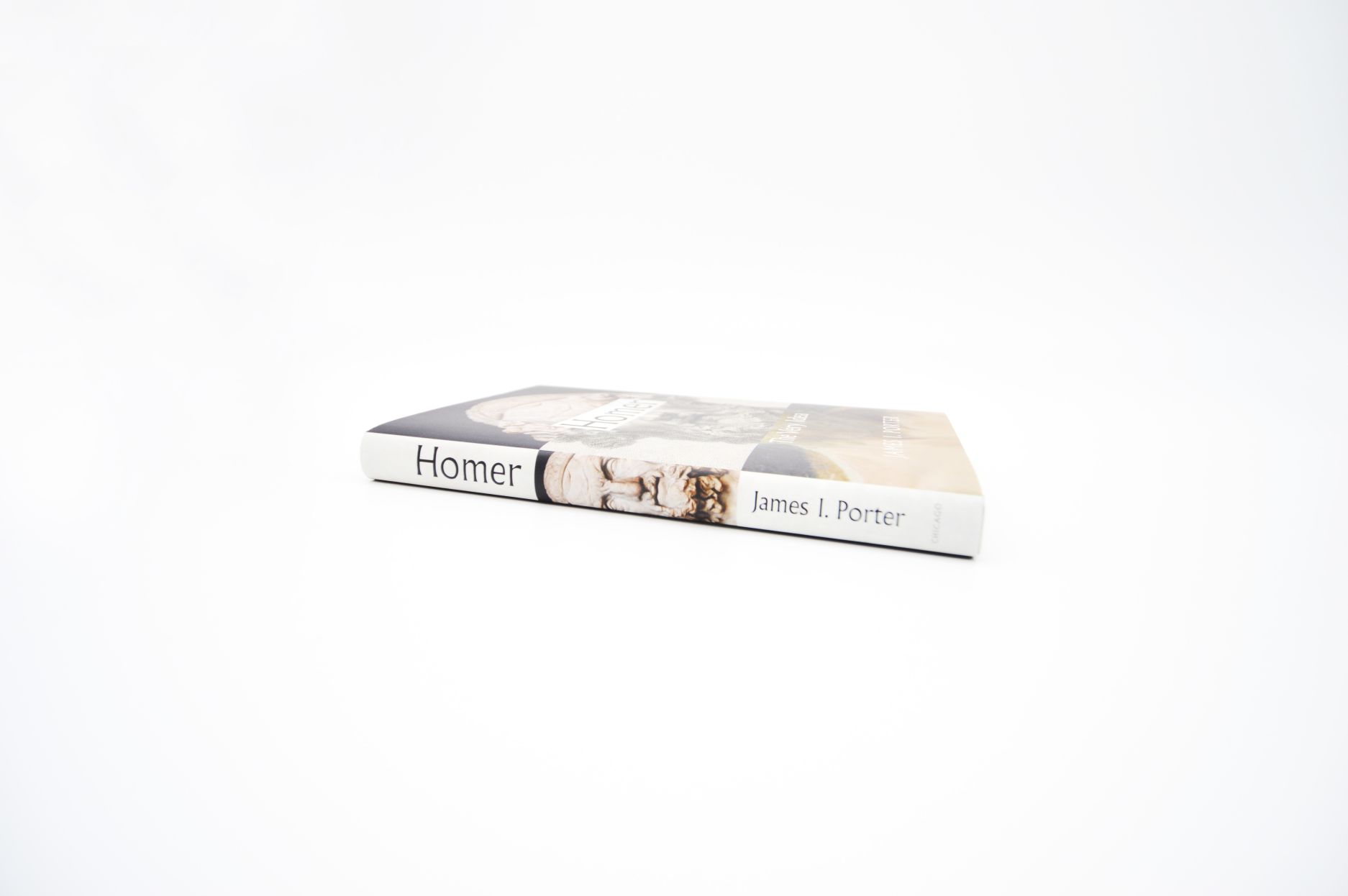