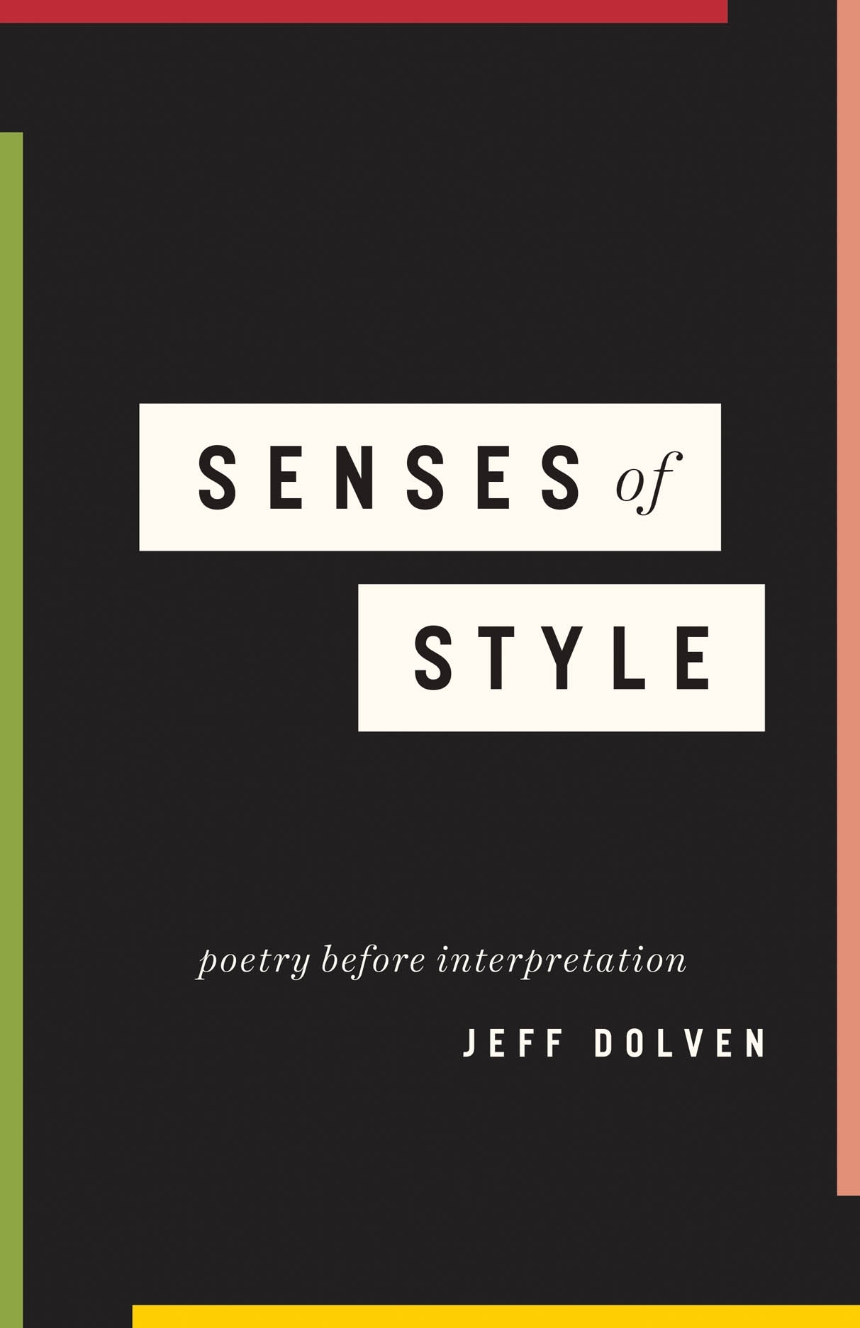 In an age of interpretation, style eludes criticism. Yet it does so much tacit work: telling time, telling us apart, telling us who we are. What does style have to do with form, history, meaning, our moment’s favored categories? What do we miss when we look right through it? Senses of Style essays an answer. An experiment in criticism, crossing four hundred years and composed of nearly four hundred brief, aphoristic remarks, it is a book of theory steeped in examples, drawn from the works and lives of two men: Sir Thomas Wyatt, poet and diplomat in the court of Henry VIII, and his admirer Frank O’Hara, the midcentury American poet, curator, and boulevardier. Starting with puzzle of why Wyatt’s work spoke so powerfully to O’Hara across the centuries, Jeff Dolven ultimately explains what we talk about when we talk about style, whether in the sixteenth century, the twentieth, or the twenty-first.

"The resistance to style is what makes Dolven’s protagonists such compelling objects of study. Like impish players who flout the rules of a game only to make us articulate them, O’Hara and Wyatt illuminate the secret logic of style in precisely the moments when they evade it."

"It is a sign of how much Senses of Style moves our thinking about its titular term that we can ask these questions as we try to grasp the flexible limits of a concept without becoming sclerotic about it. Dolven would likely agree with Jonathan Kramnick and Anahid Nersessian when they argue for embracing a pluralistic view of form, in which the word means different things to different scholars depending on what they are trying to explain. But 'style' has not had the benefit of the explosion of discourse we have seen around 'form' in the twenty-first century. Dolven’s fabulous book invites us to remedy the situation. Allowing us to take stock of the various concepts we have of style and of the questions to which they respond, it is sure to lead the way to new directions in stylistic analysis."

“Style, Dolven teaches, has much to do with likeness, and much to do with keeping company. Everything—but everything—he reminds us over and over, in a refrain which rings throughout the book, has a style. . . . This book could not be truer or more proper to its subjects, or more generous to its readers; it points us back to poetry and criticism with new tricks and tools for experimenting with . . . . Senses of Style is something sensational, stylish, thoughtful, clever, worthwhile to read in the train: don’t travel any further without it.”

“A unique exploration of a way of receiving and exploring literary work that is underrepresented. . . . Recommended.”

“Jeff Dolven’s new book—perfectly sculpted—is sure to become a classic.  With succinct, idiosyncratic eloquence, he brings together two poets who seem to have nothing in common, and yet whose styles and stances uncannily intersect.  Through this act of radical juxtaposition, Dolven reinvents the art of criticism.”

“‘Reading for style’ sounds natural until we think about how much ‘style’ comprehends and how undigested our notions of it can be. Ambitious, conversational, and unconventional all at once, Senses of Style is the book on style for our time.”

“‘Explanation is the enemy of style,’ Jeff Dolven writes. Senses of Style gives the lie to that aperçu.  Dolven offers us both a dazzling writerly object and a model: a ramifying meditation on Wyatt and O’Hara under the sign of surprising likenings, the matter of style. Conversable, witty, erudite, pyrotechnic: Dolven paradoxes and aphorizes his way equally into the depths and the shallows. With this startling, masterly, mesmerizing book, Dolven sentences us toward a brilliantly friendly ongoingness.”