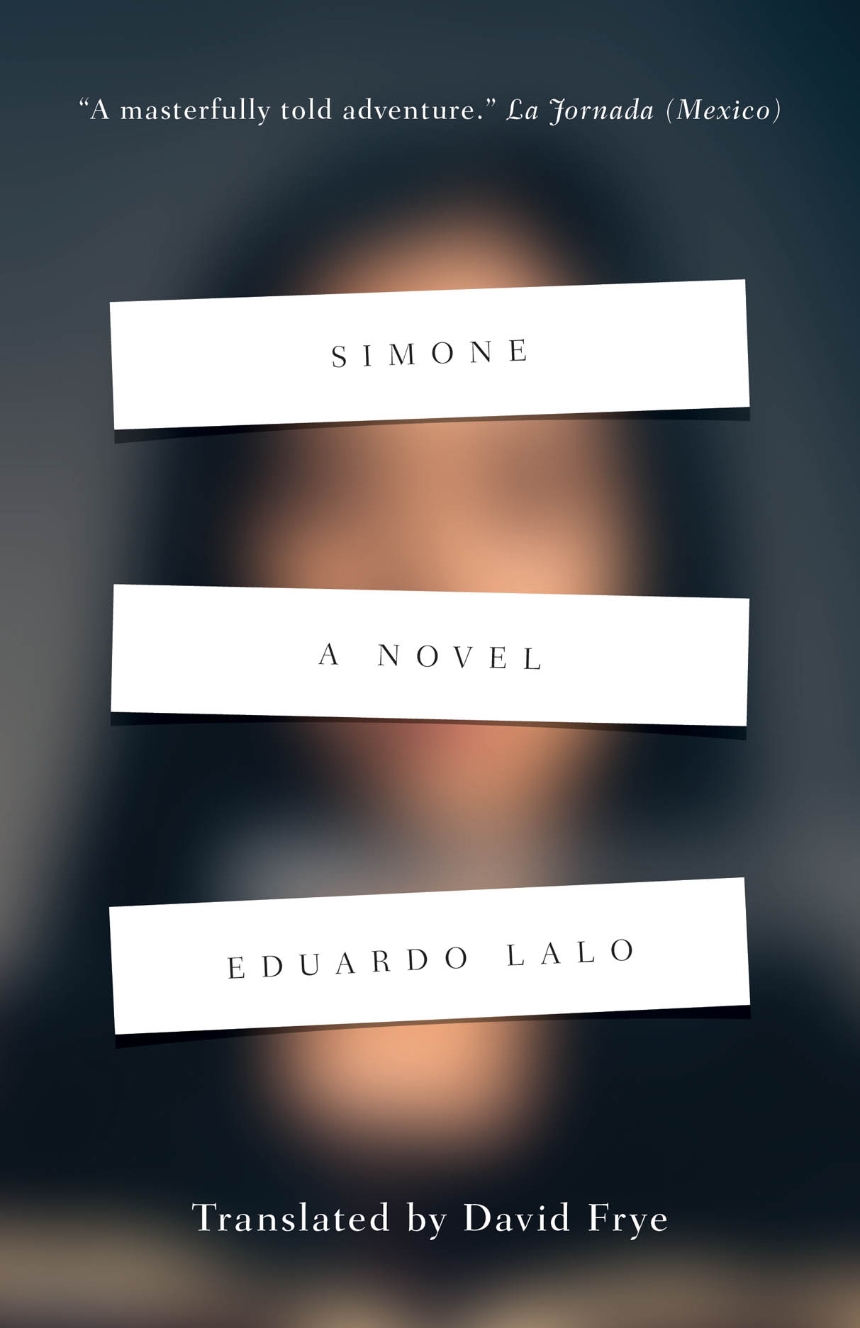 Translated by David Frye
Eduardo Lalo is one of the most vital and unique voices of Latin American literature, but his work is relatively little known in the English-speaking world. That changes now: this masterful translation of his most celebrated novel, Simone—which won the 2013 Rómulo Gallegos International Novel Prize—will introduce an English-language audience to this extraordinary literary talent.

A tale of alienation, love, suspense, imagination, and literature set on the streets of San Juan, Puerto Rico, Simone tells the story of a self-educated Chinese immigrant student courting (and stalking) a disillusioned, unnamed writer who is struggling to make a name for himself in a place that is not exactly a hotbed of literary fame. By turns solipsistic and political, romantic and dark, Simone begins with the writer’s frustrated, satiric observations on his native city and the banal life of the university where he teaches—forces utterly at odds with the sensuality of his writing. But, as mysterious messages and literary clues begin to appear—scrawled on sidewalks and walls, inside volumes set out in bookstores, left on his answering machine and under his windshield wiper—Simone progresses into a cat-and-mouse game between the writer and his mystery stalker. When the eponymous Simone’s identity is at last revealed, the writer finds in the life of this Chinese immigrant a plight not unlike his own. Traumatized and lonely, the pair moves towards bittersweet collaborations in passion, grief, and art.

“Grounded in a convincing existential weariness and genuine psychological suspense.”

“Ah, love: if it didn’t end badly, it wouldn’t end at all, especially for two star-crossed lovers in modern-day Puerto Rico. . . . A bleak but emotionally resonant work that finds weighty things to say about writing, culture, Puerto Rican identity, and the dangers of projecting one’s desire upon another. . . . This is a very eerie bit of fiction which is erotic without being romantic, psychically raw without collapsing into ennui, and linguistically expressive while using characters that live and breathe and cry right on the page. . . . The book’s human hearts ring true in the end. Like the song says, you can’t always get what you want.”

“The streets of San Juan come alive in this sparkling literary tale of love and obsession. . . . Lalo’s other novels have yet to appear in English, but one hopes that will change after the release of this book; his work will find an appreciative audience in those seeking mystery and an acute attention to language.”

“A digressive but provocative interlude between several characters that discusses the values of Spanish and Spanish-American literature and highlights the lack of respect for Puerto Rican letters. . . . This is Lalo’s only novel translated into English and represents a valiant attempt to capture fame for one of the undeservedly ignored areas of Latin America. . . . The omnipresent San Juan setting . . . symbolizes Puerto Rico as an invisible land just as the protagonist's anonymity symbolizes his invisibility.”

“Simone is reminiscent of Albert Camus’s 1942 masterpiece, The Stranger, a study in alienation and impotence. . . .  Certainly a thought-provoking book. The descriptions of Li’s abysmal circumstances—she lives practically in servitude—shed light on an almost unknown aspect of Puerto Rican reality. We are far more used to reading about the plight of Puerto Ricans in New York than about minorities in San Juan. Lalo’s dark portrayal of a sunny Caribbean city turns the conventional urban novel on its head, and his characters’ blistering condemnation of the book industry and the notion of Hispanic unity is bound to raise eyebrows. . . . Lalo’s distinct perspectives make Simone a surprising adventure and a worthwhile read.”

“Cleverly addictive. . . . The translation by Frye is seamless.”

"Beautiful. . . . To Frye’s credit, Simone never feels like a translation. . . . While the narrator obviously has significant pride in his Puerto Rico, it inevitably comes with a concomitant sense of resentment—part of the dark shadow that follows this novel sentence-by-sentence. Upon seeing the name ‘Colony Economy’ on a carton of milk in a coffee shop, the narrator muses about how Puerto Rico’s history ‘overwhelms and defines’ him. It is an apt lens through which to view Simone—characters who cannot quite escape the world they were born into, or the childhoods they were subjected to, a country shackled by the past and every extension of happiness undercut by sorrow.”

"This is ultimately a story about love as language, historical retribution as language, feeling itself as language. Perhaps this is why the book is, at its core, an argument, even a challenge: to bypass a country’s literature is to also ignore its history, its people, its love and its pain, and to care about them is to read them."

“Lalo explores the intersection of art and pain in this gorgeously written novel about two outsiders, drawn to one another by a desire to use art as a surrogate for emotional intimacy. . . . Simone is a novel of mysteries. . . . Underlying the novel’s mysteries is Lalo’s exploration of the symbiotic relationship between art and suffering. Art is not a panacea for pain . . . . Rather, pain nourishes art. . . . But by the novel’s close the writer understands that his relationship with Li cannot be sustained without the two sharing their deepest pain and vulnerabilities, an intimacy that cannot be created through art alone.”

“Although at turns a passionate love story and a political and social commentary on life in Puerto Rico, Lalo’s Simone primarily concerns writing: the singular word that he uses as the first sentence of his novel. The sparse narrative unflinchingly depicts two lonely and uncertain lovers as they meet and try to make sense of their pains through writing.”

“Simone is a clear-eyed vision of the Puerto Rican margins—some of them, and not the ones usually found in contemporary fiction, which also makes it all the more effective. Both the literary and the personal are handled well here. . . . It can seem an oddly structured novel, yet it works—especially as a whole—surprisingly well, and the shifts in Lalo's narrative make for a story that doesn't simply chug along predictably from the outset but expands, in breadth and depth, into an ultimately rich, rewarding work.”

“Though he does not spin romance into the streets of San Juan, Lalo sets the city into the skin of the narrator. This new world, invigorated by the mystery of a deep connection to another person, is set to hold its ground when it compared to the deterioration of the commonwealth’s capital. It is not until the narrator enters the Chinese minority slums—a place nearly invisible and yet highly important when discussing Puerto Rico’s declining economic culture—does the story take an amazingly dark turn. Lalo has crafted a rich tapestry of lives for us to discover, weaved into the history of the island. Both the narrator and his admirer are ‘survivors’ of an entire culture dealing with disconnection and loss.”

“Lalo’s selection as . . . recipient of the prestigious Rómulo Gallegos International Novel Prize is an event of transcendental significance. This virtually unknown writer shares the honor with immortals like Mario Vargas Llosa, Gabriel García Marquez, Carlos Fuentes, Fernando del Paso, Abel Posse, Manuel Mejía Vallejo, Arturo Uslar Pietri, Mempo Giardinelli, Javier Marías, Angeles Mastretta, Roberto Bolaño, Enrique Vila Matas, Fernando Vallejo, Isaac Rosa, Elena Poniatowska, William Ospina, and Ricardo Piglia. But if the distinction conferred to this intriguing writer is important in literary terms, even more interesting is the recognition that is given—through his work—to a nation that is not recognized as such, yet. . . . Against all odds, Lalo’s voice was able to transcend the ‘dead zone’ of colonialism, to bring to life not only a great novel that debunks preconceptions of Spanish-language literature in less than two hundred pages, but also the clairvoyant possibility of a nation.”

“Simone has the stuff of the great literary works . . . . The novel is a good example showing that literature in Puerto Rico, like the history of the country, is made of paradoxical relationships of love and hate, of liminality and darkness, most always in the contingency of the contradictory. But, in any case, without opposites there is no progression; without antithesis, there is no synthesis.”

“A well-told story, where the human condition emerges as the center of the plot: the characteristic miseries, the fears, the anxieties, the need to be recognized/loved/taken into account by the other.”

“There is something magnetic with the names in Simone. . . . The condition of strangeness is radicalized. All are equally foreign in this San Juan, the narrator as well as Li. . . . The relationship between the narrator and Li can also be read as an exploration, not without pathos and self-absorption, of the abyss that separates them. If a writer has to be, as we read in the novel, ‘an athlete of defeat,’ the same requirement would seem to be true for lovers, doomed to run toward a goal that, they know, never arrives on time.”