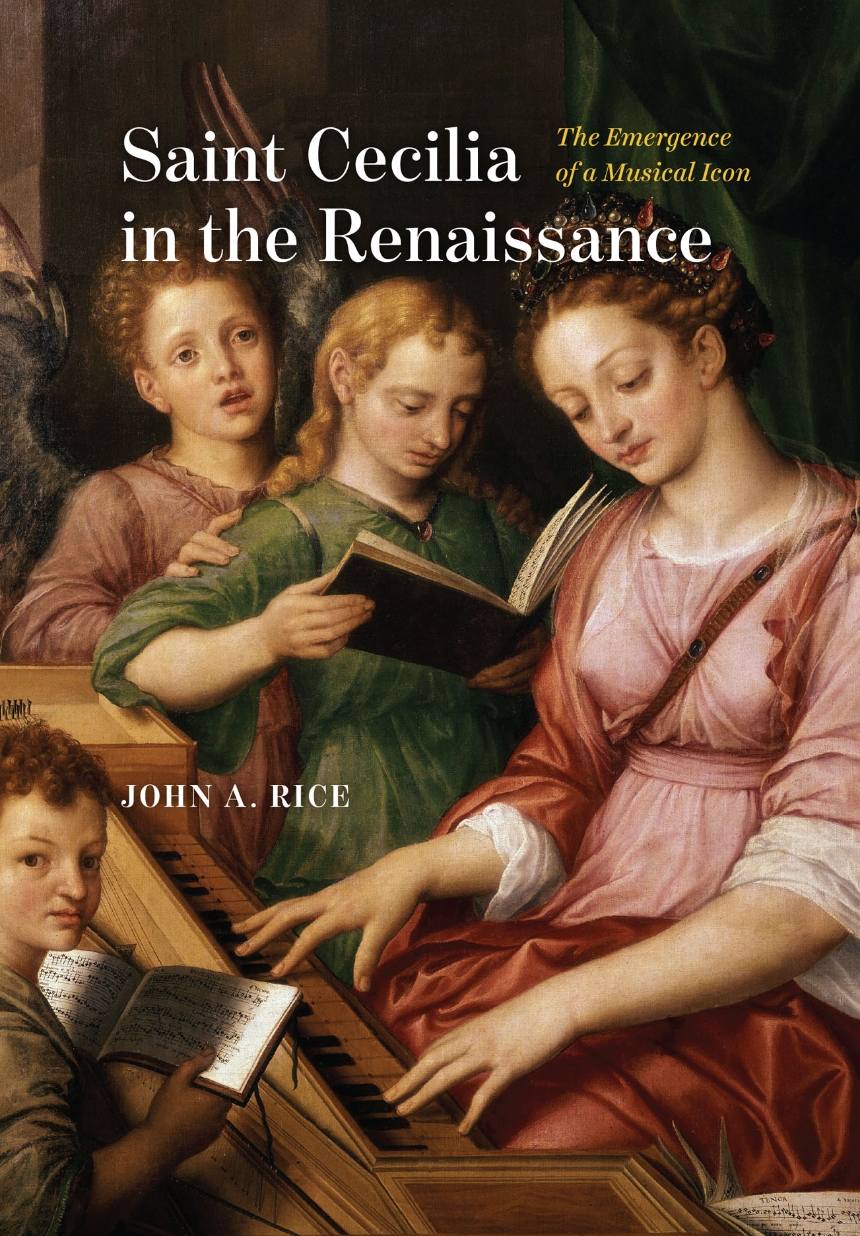 Saint Cecilia in the Renaissance

The Emergence of a Musical Icon

Saint Cecilia in the Renaissance

The Emergence of a Musical Icon

This study uncovers how Saint Cecilia came to be closely associated with music and musicians.

Until the fifteenth century, Saint Cecilia was not connected with music. She was perceived as one of many virgin martyrs, with no obvious musical skills or interests. During the next two centuries, however, she inspired many musical works written in her honor and a vast number of paintings that depicted her singing or playing an instrument.

In this book, John A. Rice argues that Cecilia’s association with music came about in several stages, involving Christian liturgy, visual arts, and music. It was fostered by interactions between artists, musicians, and their patrons and the transfer of visual and musical traditions from northern Europe to Italy. Saint Cecilia in the Renaissance explores the cult of the saint in Medieval times and through the sixteenth century when musicians’ guilds in the Low Countries and France first chose Cecilia as their patron. The book then turns to music and the explosion of polyphonic vocal works written in Cecilia’s honor by some of the most celebrated composers in Europe. Finally, the book examines the wealth of visual representations of Cecilia especially during the Italian Renaissance, among which Raphael’s 1515 painting, The Ecstasy of Saint Cecilia, is but the most famous example. Thoroughly researched and beautifully illustrated in color, Saint Cecilia in the Renaissance is the definitive portrait of Saint Cecilia as a figure of musical and artistic inspiration.

“In this thoroughly researched study, Rice takes his readers through the changing image of an elusive yet inspiring figure with a growing presence in the musical, visual, devotional, and social history of sixteenth-century Europe. Rice skillfully situates Cecilia at the crossroads of earthly and spiritual concerns, gender politics, and pervasive cultural dynamics across the continent. The result is a rich journey into the afterlife of an early Christian martyr turned into a musical icon for the emerging religious and institutional landscape of early modern Europe.”

“Saint Cecilia in the Renaissance is a meticulously researched and convincing picture of the figure of Saint Cecilia and her cultural importance from the Middle Ages to the end of the Renaissance. Rice has provided a fascinating and accessible narrative that reveals a variety of social and musical activities related to the veneration of the saint. Visually instructive and appealing, the book will be of interest to musicologists, art historians, historians, and nonspecialists alike.”

“In this interdisciplinary book filled with historical texts, illustrations, and musical analyses, Rice reveals the transformative power of music as he demonstrates how musicians, first in the Netherlands and Cologne, and then in France, Italy, and London, reinvented St. Cecilia, a nonmusical Roman virgin-martyr, as their favored patroness and as a singer, organist, or performer on the virginal, clavichord, violin, bass viol, or lute. Two words, ‘Cantantibus organis,’ from the fifth-century description of Cecilia’s wedding, guide Rice and his readers to her appearances in the famous Hartker Codex, Chaucer’s Canterbury Tales, confraternity chapels, an altar in the Roman Pantheon, extravagant feasting to music on 22 November, plays, an alliterative poem on ‘C,’ competitions of composers, a papal mass for three choirs and three organs, and to more than one-hundred forty choral works celebrating her by Isaac, Clemens non Papa, Gombert, Guerrero, Lassus, Palestrina, Anerio, Marenzio, Purcell, and others. This study many years in the making is cultural history at its best.”

"John A. Rice’s new book St. Cecilia in the Renaissance: The Emergence of a Musical Icon gives a definitive account of this evolution of a lesser martyr into celebrated muse and patron saint of music and musicians. He traces the development of the cult of St. Cecilia through Christian liturgy, the visual arts and music, starting in northern Europe in the Middle Ages and moving to Italy, when an explosion of polyphonic vocal works were written in her honour by some of the most celebrated composers in Europe... the book is generous with both musical examples and colour plates."

List of Illustrations
List of Musical Examples
List of Tables
Bibliographic Abbreviations and Library Sigla
A Note on Spelling, Terminology, Musical Examples, and Translations
Introduction
1 Wedding Music: Retelling the Passio in Medieval and Early Renaissance Liturgy, Literature, and Art
2 Beyond the Legend and Liturgy: The Organ as Emblem
3 The Celebration of Cecilia’s Day by Musical Organizations and Singers in the Netherlands and France
4 Franco-Flemish Cecilian Motets: Composers, Publishers, Performers, Venues
5 Franco-Flemish Cecilian Motets: Words and Music
6 Italian Artists Depict Cecilia from the Late Fifteenth Century to the Late Sixteenth Century
7 Cecilia Returns to Rome
Epilogue: From Saint to Muse
Acknowledgments
Appendix: Music for Cecilia Published or Copied before 1620: Chronological List
Notes
Bibliography
Index