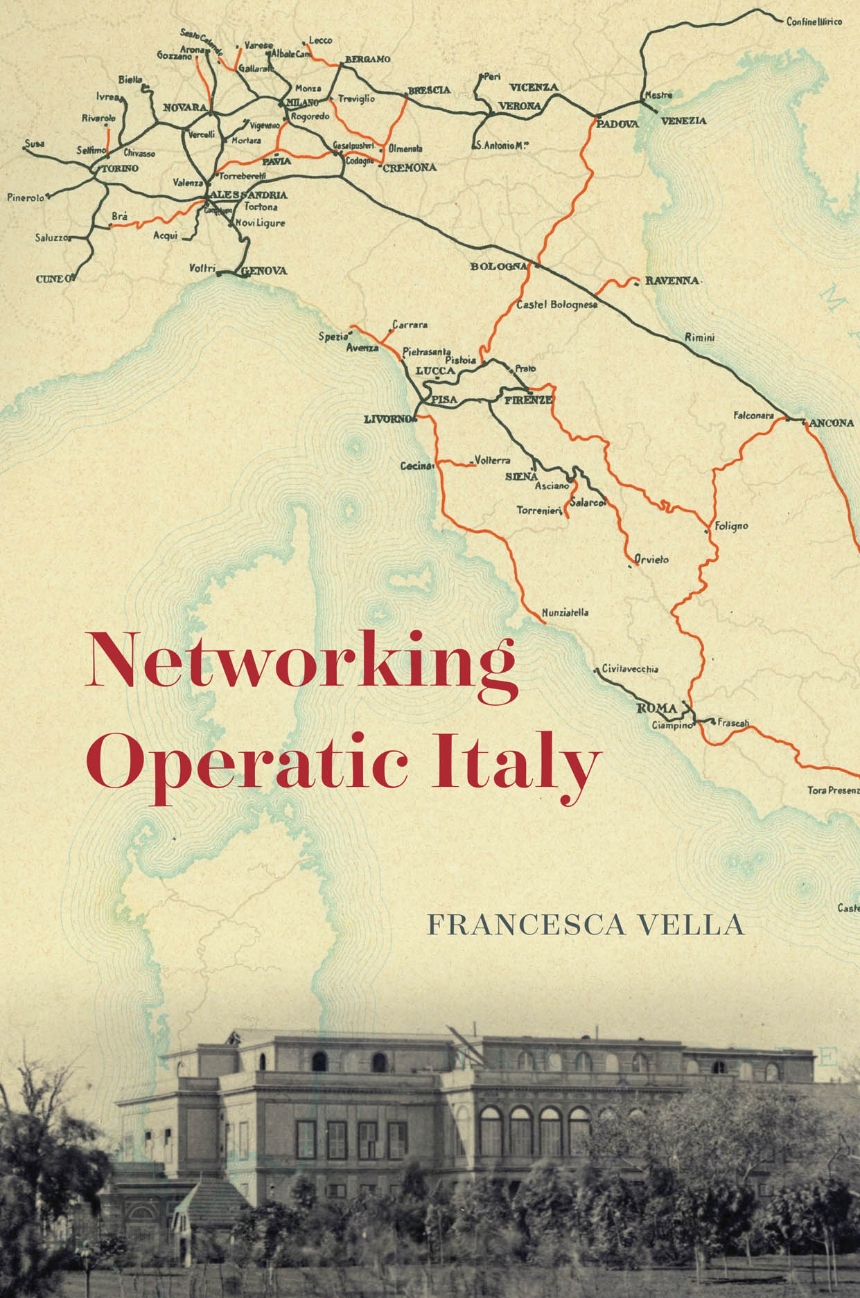 A study of the networks of opera production and critical discourse that shaped Italian cultural identity during and after Unification.

Opera’s role in shaping Italian identity has long fascinated both critics and scholars. Whereas the romance of the Risorgimento once spurred analyses of how individual works and styles grew out of and fostered specifically “Italian” sensibilities and modes of address, more recently scholars have discovered the ways in which opera has animated Italians’ social and cultural life in myriad different local contexts.

In Networking Operatic Italy, Francesca Vella reexamines this much-debated topic by exploring how, where, and why opera traveled on the mid-nineteenth-century peninsula, and what this mobility meant for opera, Italian cities, and Italy alike. Focusing on the 1850s to the 1870s, Vella attends to opera’s encounters with new technologies of transportation and communication, as well as its continued dissemination through newspapers, wind bands, and singing human bodies. Ultimately, this book sheds light on the vibrancy and complexity of nineteenth-century Italian operatic cultures, challenging many of our assumptions about an often exoticized country.

“Thoroughly and rigorously researched and at the same time beautifully written, Networking Operatic Italy is a must-read for scholars and teachers in musicology, opera studies, Italian studies, and media studies. Francesca Vella deftly negotiates media theory and historical context, including reception theory, with refined and elegant readings of her musical texts. Her chapters on Verdi’s Aida and on military bands are a model for interdisciplinary research in the humanities.”

“Vella breaks with the idea that nineteenth-century Italians were obsessed with their own culture and traditions and the narrow boundaries of their local communities. Networking Operatic Italy presents a new chapter in musicological research, introducing mobility studies into the history of opera and offering fascinating new interpretations of Italians’ engagement with music and theater. This is a book of great erudition and imaginative power.”

“Networking Operatic Italy is an innovative and exciting exploration of opera on the move in mid-nineteenth-century Italy at the crucial time of national unification. Vella asks what these travels meant not only for opera, but also for a nation in the making. Her imaginative and comprehensive answers make for a compelling, multifaceted, and wholly original book.”

“Astutely researched, Networking Operatic Italy weaves together an impressive array of recent humanistic trends. Tending to the local and the global, to mobility, materiality, temporality, technologies, media, and the voice, its case studies offer a unique journey through Italy’s rich operatic cultures in the decades around Unification. Vella thus manages to reframe the seemingly well-traveled world of later nineteenth-century Italian opera in view of its networked affordances, contingencies, and (often conflicting) modernizing impulses.”