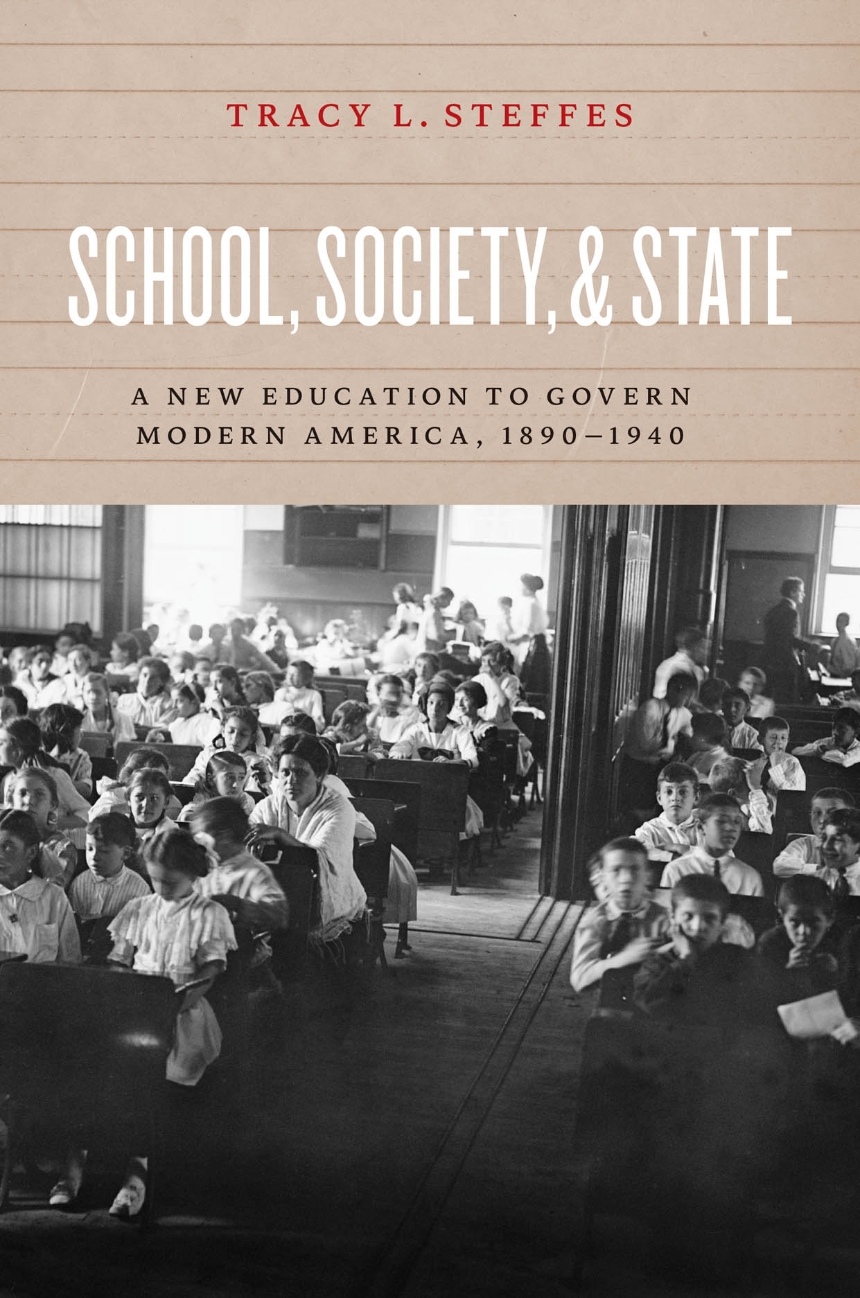 “Democracy has to be born anew every generation, and education is its midwife,” wrote John Dewey in his classic work The School and Society. In School, Society, and State, Tracy Steffes places that idea at the center of her exploration of the connections between public school reform in the early twentieth century and American political development from 1890 to 1940.

American public schooling, Steffes shows, was not merely another reform project of the Progressive Era, but a central one. She addresses why Americans invested in public education and explains how an array of reformers subtly transformed schooling into a tool of social governance to address the consequences of industrialization and urbanization. By extending the reach of schools, broadening their mandate, and expanding their authority over the well-being of children, the state assumed a defining role in the education—and in the lives—of American families.

In School, Society, and State, Steffes returns the state to the study of the history of education and brings the schools back into our discussion of state power during a pivotal moment in American political development.

“How did Americans develop a school system that was both national in scope and local in character? In this remarkable book, Tracy Steffes provides some bold new answers to a very old question. For the past century, Americans have asked public schools to reconcile individualism with collectivism, localism with centralization, and democracy with capitalism. Steffes asks why and whether we're asking schools to do too much.”

“Historians have noted the expansion of the regulatory state on issues of social welfare during the late nineteenth and early twentieth century, but no one has analyzed this phenomenon in the field of education with such clarity and energy as Tracy Steffes. Lively from the first page to the last, School, Society, and State sheds light both on the expansion of state-level regulations and on the development of a national culture of shared policy and practice. This is a judicious book, well researched and nicely conceived.”

“In a rich and original historical account, Tracy Steffes explores the development of American schooling in order to illuminate the distinctive quality of the American state. Public education represents a system that is simultaneously local and national, an array of institutions that both cultivates the individual citizen and enables government power to penetrate deeply into the authority of parents to determine whether their children should attend school and what they should learn. School, Society, and State makes a powerful case for how the power of the state is constituted in everyday practices and “bottom-up” processes.”

“In a country characterized by decentralized legal control, limited federal authority, and general discomfort with social welfare programs, how did we end up with the school system we have? . . . It is a compelling line of inquiry, and in pursuing it Tracy Steffes draws on a broad range of sources—both primary and secondary—from political science, legal history, sociology, political history, and the history of education.”

“Tracy Steffes aims to demonstrate that early-twentieth-century school reform was the result of both top down and bottom up planning, and represents an example of ‘a major project of national state-building’ in response to the social and economic tensions of the time. Steffes is largely successful in making this argument, with some chapters being quite insightful.”

“This important new work provides a sweeping overview of the reasons for implementation of reforms associated with the Progressive-era ‘new education’ and the significance of those reforms for both society and state. Steffes takes various aspects of educational history that have been well covered by other historians and knits them into a cohesive whole by considering their relation to state-building. The end result effectively challenges some long held assumptions about reformers’ methods and aims while also making a convincing case for public education as a key component of the American welfare state. . . . Steffes’s careful analysis of why and how Americans placed unrealistic expectations on schools is just as important for public policymakers today as it is for historians.”

“In ‘bringing the state back in’ to the history of American schooling, Steffes provides a major new interpretation to a period that has enduring significance. Education scholars will learn a great deal from Steffes’s careful arguments about how ‘the state’ (as well as states) transformed education in the early twentieth century and how the ways in which we educate continue to shape how we govern.”

“School, Society, and State is an outstanding exploration of the causes and effects of the American Progressive Era through the lens of education reform. Because the book is comprehensive in addressing the social, political, and economic landscape of the period, it is an essential read for both faculty and students of United States history. Additionally, those pursuing a graduate degree in education should read this work to better understand the history of their profession.”

“Well researched, clearly written, and cogently argued, School, Society, and State helps recast our understanding of how schools shaped the unique qualities of the American welfare state. Students who had access to new social services were also taught to accept personal responsibility for success and failure. As Steffes aptly concludes, the public generally wanted schools ‘to safeguard’ the American dream but not question the essential fairness of American society.”