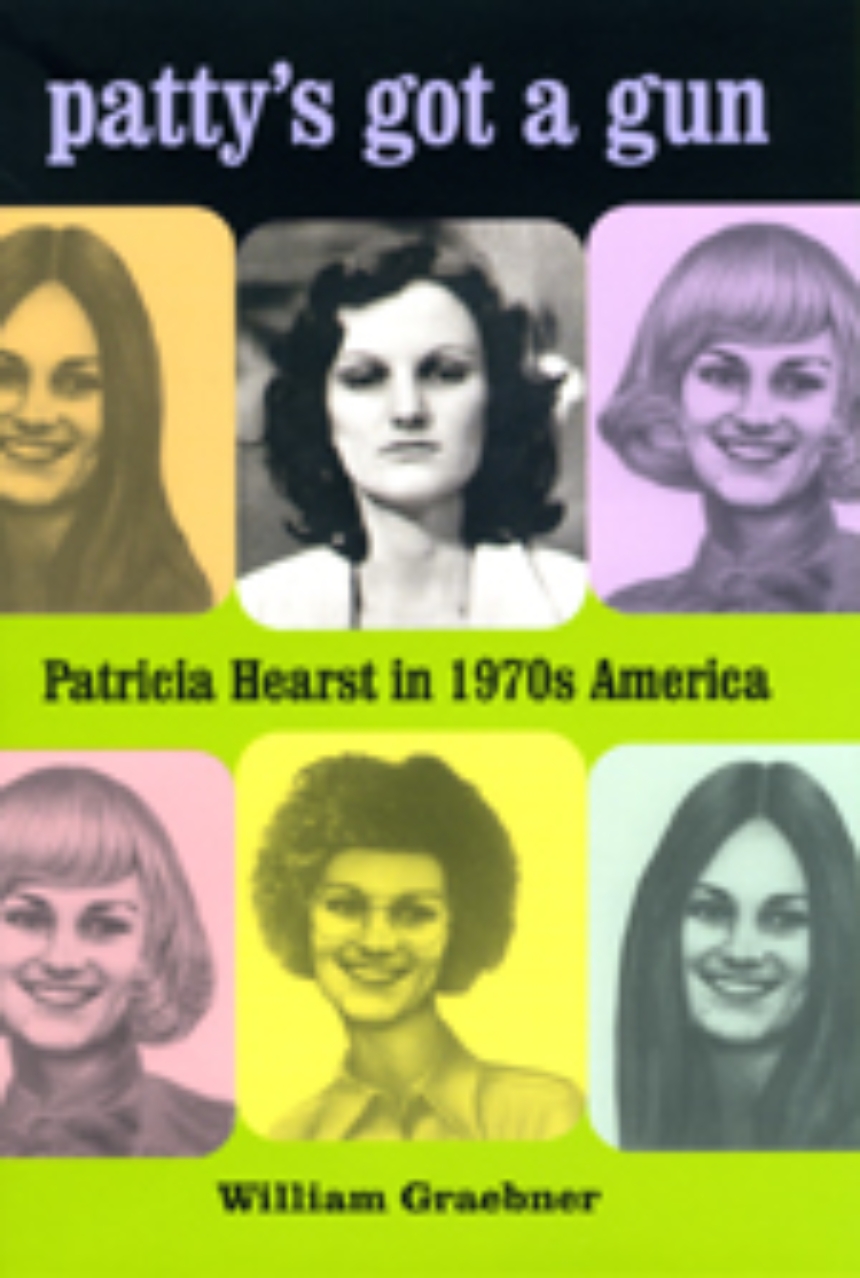 Patty’s Got a Gun

Patty’s Got a Gun

It was a story so bizarre it defied belief: in April 1974, twenty-year-old newspaper heiress Patricia Hearst robbed a San Francisco bank in the company of members of the Symbionese Liberation Army—who had kidnapped her a mere nine weeks earlier. But the robbery—and the spectacular 1976 trial that ended with Hearst’s criminal conviction—seemed oddly appropriate to the troubled mood of the nation, an instant exemplar of a turbulent era.
With Patty’s Got a Gun, the first substantial reconsideration of Patty Hearst’s story in more than twenty-five years, William Graebner vividly re-creates the atmosphere of uncertainty and frustration of mid-1970s America. Drawing on copious media accounts of the robbery and trial—as well as cultural artifacts from glam rock to Invasion of the Body Snatchers—Graebner paints a compelling portrait of a nation confused and frightened by the upheavals of 1960s liberalism and beginning to tip over into what would become Reagan-era conservatism, with its invocations of individual responsibility and the heroic. Trapped in the middle of that shift, the affectless, zombielike, “brainwashed” Patty Hearst was a ready-made symbol of all that seemed to have gone wrong with the sixties—the inevitable result, some said, of rampant permissiveness, feckless elitism, the loss of moral clarity, and feminism run amok.
By offering a fresh look at Patty Hearst and her trial—for the first time free from the agendas of the day, yet set fully in their cultural context—Patty’s Got a Gun delivers a nuanced portrait of both an unforgettable moment and an entire era, one whose repercussions continue to be felt today.

Read an excerpt. Listen to an audio interview.

"I enjoyed this 'retrospective essay' on the remarkable story of Patty Hearst. . . . Graebner's essay offers far more than narrative. It contextualises a story that ‘shocked the nation’ in its historical context, midway between the permissive radicalism of the 1960s and a backlash that anticipated the new conservatism of the Reagan era. . . . Graebner combines erudition and scholarship with a sense of humour."

"What makes the book worth reading is not so much the first half, a compelling enough account of Ms. Hearst’s kidnapping and subsequent time in the headlines, as the second half: an attempt to put the Hearst affair in the context of an America struggling to emerge from the Vietnam quagmire and the ignominy of Watergate."

“In that anxious interval between the twilight of the Sixties and the dawn of Ronald Reagan’s ‘Morning in America,’ no story made the nation as uneasy as the crazy and ambiguous ordeal of Patty Hearst. William Graebner sheds new light on that most troubling story, and thereby helps us understand two nations: the terrified America that watched it all unfold, and the more assured and brutal place that it would soon become.”

Mark Crispin Miller, author of The Bush Dyslexicon: Observations on a National Disorder

“In an era traumatized by defeat in Vietnam, betrayal in Washington, stagflation, and shockingly violent crimes, the saga of Patty Hearst—kidnapped heiress turned carbine-toting bankrobber—was perhaps the most shocking tale of all. William Graebner’s rich retelling uses Hearst’s story to probe one of the central preoccupations of the Seventies: the nature of personal identity. What happened to Hearst fascinated, and continues to fascinate, because it raised the question of what any of us might become in the face of extraordinary circumstances.”

Thomas Hine, author The Great Funk: Falling Apart and Coming Together (on a Shag Rug) in the Seventies

“William Graebner’s brilliant analysis of America’s struggles over the meaning of Patty Hearst gives us not only new perspectives on the 1970s, on Americans’ fundamental understandings of their world in a bicentennial year that offered little to celebrate, but also on the longing for heroism and the desire for belief in free will that Graebner believes structured the rise of Reagan-era conservatism. This is a masterful work of cultural history.”

Beth Bailey, author of From Front Porch to Back Seat: Courtship in Twentieth-Century America

“In this work, Graebner reconsiders the kidnapping and trial of heiress Patricia Hearst in the context of psychiatry, media, politics, and popular culture in the 1970s. The book is divided into two parts: the first half is a detailed recitation of the kidnapping of Hearst by members of the Symbionese Liberation Army, or SLA (an American self-styled urban guerrilla warfare group active in the 1970s); the crimes committed by her; and her trial and conviction. In the second part, titled ‘Reading Patty Hearst,’ the author concedes that no one knows why Hearst joined her SLA captors. He cites society’s dismay with the chaos of the Nixon administration, the decline of the family, and the survival culture of the day. Patty’s Got a Gun is a well-written, sophisticated speculation of why Hearst was convicted both by the jury and in the court of public opinion at the onset of the Reagan era.”--Library Journal

"Graebner conducts an intellectual history tour de force that will enrich the scholarship of this period, providing a look into a discrete but revealing episode that exposes the era's most fervent concerns."