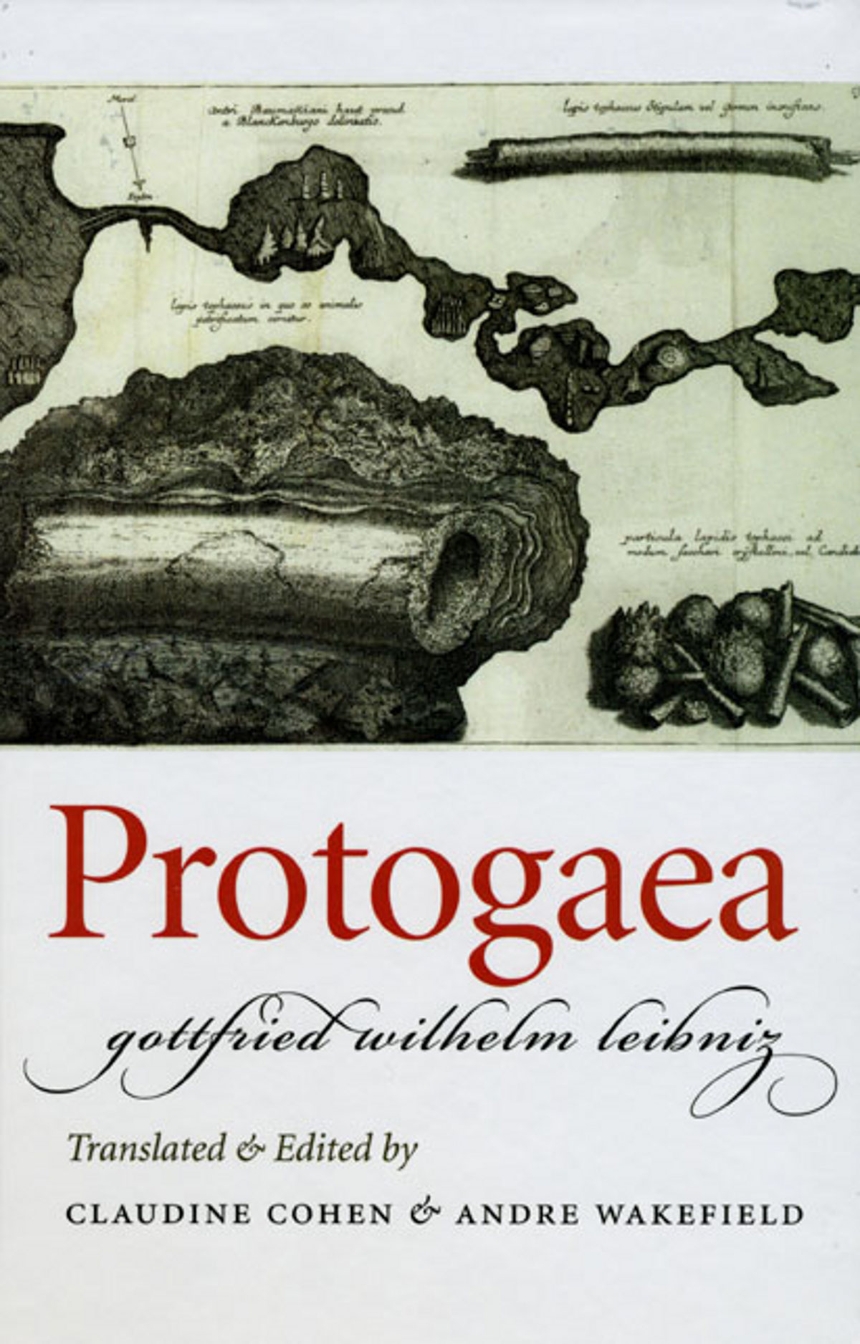 Edited and Translated by Claudine Cohen and Andre Wakefield
Protogaea, an ambitious account of terrestrial history, was central to the development of the earth sciences in the eighteenth century and provides key philosophical insights into the unity of Gottfried Wilhelm Leibniz’s thought and writings. In the book, Leibniz offers observations about the formation of the earth, the actions of fire and water, the genesis of rocks and minerals, the origins of salts and springs, the formation of fossils, and their identification as the remains of living organisms. Protogaea also includes a series of engraved plates depicting the remains of animals—in particular the famous reconstruction of a “fossil unicorn”—together with a cross section of the cave in which some fossil objects were discovered.
Though the works of Leibniz have been widely translated, Protogaea has languished in its original Latin for centuries. Now Claudine Cohen and Andre Wakefield offer the first English translation of this central text in natural philosophy and natural history. Written between 1691 and 1693, and first published after Leibniz’s death in 1749, Protogaea reemerges in this bilingual edition with an introduction that carefully situates the work within its historical context.

“It is wonderful to have, at last, an English translation of Leibniz’s Protogaea, presented with a valuable introduction by Claudine Cohen and Andre Wakefield. Protogaea is a document of great significance for our understanding of earth science in the late seventeenth and eighteenth centuries. Through this carefully prepared and handsomely presented edition, students and scholars now have a fresh opportunity to examine Leibniz’s thinking about the earth, its history, and its natural operations. Cohen and Wakefield rightly emphasize the multiple contexts in which this work should be considered. These include Leibniz’s concern with both universal philosophical questions and detailed local description, his involvement in the latest mining and power technology know-how, and his responsibilities as a courtly historian.”

“The Protogaea reveals to us a very different Leibniz than we usually confront, and in this learned and readable edition, Claudine Cohen and André Wakefield reveal to us the Protogaea. This work shows us a hitherto unappreciated aspect of Leibniz’s insatiable curiosity about the world. It is, furthermore, a window into one of the earliest and most influential attempts to come to grips with the deep history of the earth in a rigorous way.”

“The first English translation, with parallel Latin text, of Leibniz’s often cited but rather rarely read Protogaea, with an excellent scholarly introduction. The work reveals the author’s extensive knowledge of ‘mundane’ matters and expounds his interesting speculations about the earth’s origin and history. With its reproductions of the original illustrations, this will be the standard edition, invaluable to both Leibniz specialists and historians of geoscience.”

“The Protogaea is a wonderful exemplar of post-Cartesian science, attempting to explain such phenomena as the Flood and fossils in physical terms, subject to the laws of nature, occurring in a historical time frame that stretches well beyond the account of Genesis. We are indebted to Cohen and Wakefield for producing a superior version of it, with an introduction and annotations setting the historical context, a new Latin edition, and the very first English translation.”

"Historically, this is a very influential book that has finally been brought out of obscurity for readers of English. Essential."

"Protogaea not only offers scholars of a wide range of topics a welcome tool for further research, but also, through its introduction, provides an extremely worthwhile contribution to contemporary discussions of late seventeenth-century thought in its own right. By recovering this important testament . . . Cohen and Wakefield draw our attention to the multifaceted interests of virtuosi at the time and to the many ways in which natural philosophy intersected with natural history. . . . Protogaea gives us a much fuller picture of science and culture in the territories of the Holy Roman Empire at a crucial time in its history. Cohen and Wakefield are to be commended for their hard work in making it possible for the Protogaea to reach the audience it deserves.—Alix Cooper, H-Net Review

"Gottfried Wilhelm Leibniz is often remembered as the brilliant mathematician and rationalist who possibly invented calculus before Isaac Newton and who was suspicious of John Locke’s empiricist epistemology. But, as Claudine Cohen and Andre Wakefield’s new translation of Leibniz’s Protogaea elegantly reveals, he had many other tantalizing interests....The image of Leibniz that emerges in Protogaea is a bit different from that of the reified rationalist sometimes presented in philosophy courses, or even the number-crunching mathematician whom historians of science have made out to be Newton’s intellectual nemesis. These pages speak to Leibniz’s role as a traveler, chemist, linguist, and antiquarian and, above all, as an inquisitive naturalist seasoned by detailed observations made in situ or sometimes excavated from obscure chorographies and chronicles....Cohen and Wakefield deserve to be commended for providing a readable translation of Protogaea that is skillfully contextualized by an informative introduction and strategic footnotes and beneficially augmented by contemporary images and cogent appendixes. In a time when university presses often shy away from supporting the translation of primary texts that are not immediately recognizable to the intelligent reader, the University of Chicago Press deserves to be heartily congratulated for supporting this project and for producing such an attractive book. Its presence on library shelves will provide a more nuanced picture of Leibniz’s multifaceted mind and a deeper understanding of the cognitive framework used by early modern naturalists to understand the terraqueous globe."

Protogaea
I. Preamble
II. The first formation of the earth through fire
III. Different opinions concerning the creation of the globe
IV. Sea salt, fires, and cycles of precipitation
V. The many changes in our globe after its initial creation
VI. What was the source of the water that covered the earth? And where did it go?
VII. Bructerus and the origin of springs
VIII. Deposits of metal in the earth and a description of veins
IX. The generation of minerals explained through chemistry
X. Products common to laboratories and mines
XI. The generation of precious stones, natural and artificial
XII. Natural sublimations and the preparation of sal ammoniac
XIII. It is through fire that metals appear in their proper forms
XIV. Some bodies owe their form to the movement of waters
XV. Some bodies coalesce in the waters
XVI. Kinds of tuff stone formed by dripping water
XVII. Some things arise from the combined action of heat and water
XVIII. Where do the shapes of various fish imprinted on slates come from?
XIX. Earthquakes, volcanoes, and other things show that there is fire inside our globe
XX. The forms of fish imprinted on slate come from real fish, and are not games of nature
XXI. The different layers of the earth, their locations, and the origin of salts and salt waters
XXII. The origin of mountains and hills explained through waters, winds, and earthquakes
XXIII. Marine shells are found throughout our region and elsewhere
XXIV. The various kinds of shells were not created inside the stone, as is evident from their forms and positions
XXV. The shells and bones of excavated marine animals can be identified as the parts of real animals
XXVI. In ancient times, nearby seas contained animals and shellfish that are no longer found there
XXVII. Glossopetrae, asterias, trochites, etc., are the remains of marine animals, and not games of nature
XXVIII. But it is wrong to include the polygonal shapes that can be found in crystals among these
XXIX. In which a certain lazy ingenuity, which invents things alien to truth, is rejected
XXX. Where can the Lüneburg glossopetrae be found?
XXXI. Glossopetrae are sharks’ teeth
XXXII. The medical use of glossopetrae
XXXIII. Belemnites, osteocolla, shell-filled stones, and fossil ivory
XXXIV. Bones, jaws, skulls, and teeth found in our region
XXXV. The unicorn’s horn, and an enormous animal unearthed in Quedlinburg
XXXVI. Sharzfeld Cave and the bones that have been found in it
XXXVII. The Baumann Cave and its contents
XXXVIII. On the nature of amber, especially the kind found in our region
XXXIX. Changes wrought by rivers and the vestiges of upheavals in our region
XL. The struggle between sea and land
XLI. Sea and marsh once covered Venice and Este
XLII. The marvelous fountains of Modena
XLIII. How Modena’s fountains are produced
XLIV. The layers of earth in Rosdorf, near Göttingen
XLV. On buried trees and petrified wood
XLVI. Peat and its origin
XLVII. On trees buried underground
XLVIII. The various layers of earth observed in Amsterdam