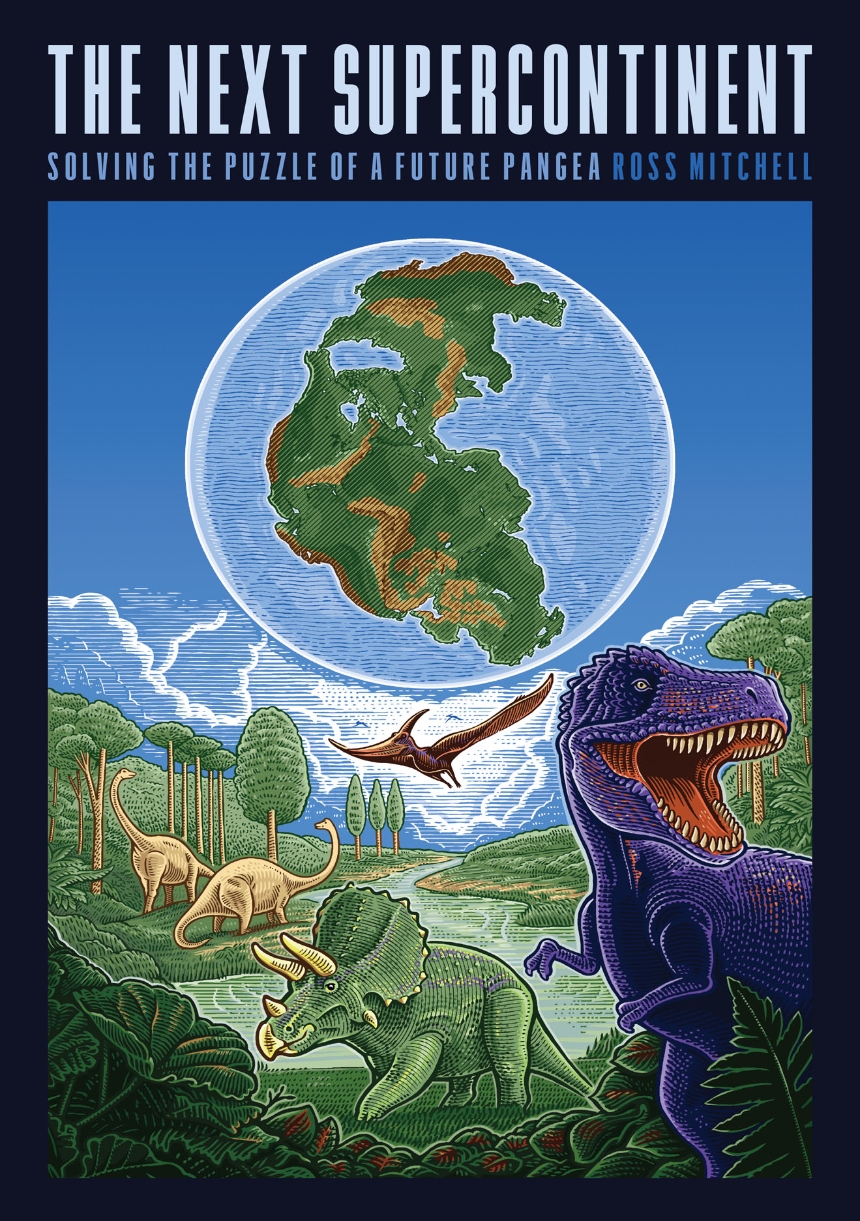 Solving the Puzzle of a Future Pangea

Solving the Puzzle of a Future Pangea

An internationally recognized scientist shows that Earth’s separate continents, once together in Pangea, are again on a collision course.

You’ve heard of Pangea, the single landmass that broke apart some 175 million years ago to give us our current continents, but what about its predecessors, Rodinia or Columbia? These “supercontinents” from Earth’s past provide evidence that land repeatedly joins and separates. While scientists debate what that next supercontinent will look like—and what to name it—they all agree: one is coming.

In this engaging work, geophysicist Ross Mitchell invites readers to remote (and sometimes treacherous) lands for evidence of past supercontinents, delves into the phenomena that will birth the next, and presents the case for the future supercontinent of Amasia, defined by the merging of North America and Asia. Introducing readers to plate tectonic theory through fieldwork adventures and accessible scientific descriptions, Mitchell considers flows deep in the Earth’s mantle to explain Amasia’s future formation and shows how this developing theory can illuminate other planetary mysteries. He then poses the inevitable question: how can humanity survive the intervening 200 million years necessary to see Amasia?

An expert on the supercontinent cycle, Mitchell offers readers a front-row seat to a slow-motion mystery and an ongoing scientific debate.

"Ross Mitchell provides a cinematic view of Earth over billion-year timescales, showing how the slow-motion dance of the continents has a deep underlying logic that makes it possible to predict geographies of the distant future."

Marcia Bjornerud | author of "Timefulness: How Thinking Like a Geologist Can Help Save the World" | Lawrence University

"Geological puzzles don’t get bigger than unravelling the choreography of continents since Earth’s childhood. It takes bold thinking, and reconciliation of hard-won field data with computer models of our planet’s interior, to figure out the lay of the land hundreds of millions of years ago. Ross Mitchell draws on his own cutting-edge research to explain how Earth’s heat engine works, and what ancient configurations of land and sea—vastly different from today’s map—meant for the atmosphere, climate and, crucially, the evolution of life. It’s a gripping story, vivaciously told, of prescient scientists, perilous fieldwork, and the amazing ways in which geology empowers us to situate humanity in the context of billions of years of Earth history, and to ground speculation of how the next billion might play out."

“Mitchell is the only person who could write this inviting and engaging book, which shares the thrill of scientific discovery.”

"The world is like a giant clock, with enormous tectonic gears of seemingly infinite complexity. That clock will keep ticking long after we humans are extinct, and Ross Mitchell, watchmaker, lets us see far into that future: an amazing Amasia."

Peter Ward | author of "Rare Earth: Why Complex Life is Uncommon in the Universe" | University of Washington

“A clear, accessible introduction to a ‘super’ significant topic—the supercontinent cycle—and to scientific study itself.”

"An engaging insider’s story of geological discovery and insight at a grand scale—the unification and fragmentation of supercontinents over geologic time, and why such behavior is repeating, yet changing. This first-hand account reads like The Double Helix, but with mountains for molecules."

In grade school, many of us learned how the present continents, scattered around the globe, once fit snugly together. Although each continent appears to have its own particular shape, rewind the tape 200 million years and they fit together, like the pieces of a jigsaw puzzle. “Pangea,” coined by plate tectonic pioneer Alfred Wegener, means just that: “all Earth,” a time in Earth’s past when the majority of the continents assembled into a single plate. But Pangea is just the most recent iteration of what’s called a supercontinent. At least two others have come and gone over the 4.5 billion years of our planet’s existence—and scientists like me believe there will be more in the future. The next supercontinent will likely take another 200 million years to form, but the continents are undeniably on a collision course. According to one computer model, New York City will crash into Lima, Peru. Plate tectonics is certainly powerful enough to stack one city on top of the other, sending the future’s equivalent of skyscrapers into the depths of the ocean to be recycled back down into the hot mantle. Although scientists agree that another supercontinent is coming, we have vastly different opinions on how it will take shape.

In this book, I will layout the leading contenders for the geography of the next supercontinent, explore the modern mysteries that still surround plate tectonics, and explain the science behind predicting how continents move. Alas, predicting the next supercontinent is not as simple as understanding today’s movements and pressing fast-forward. Tectonic plates move slowly, at about the same speed that our fingernails grow. But GPS is now precise enough to detect this slow motion. And residents of Pompeii, San Francisco, and Fukushima can tell you that the effects of those movements are hard to perceive—until they are devastating. Volcanoes, earthquakes, and tsunamis are evidence of plate tectonics’ power. So is geography—just look at the abrupt bend, or kink, in the chain of the Hawaiian Islands. These islands formed a straight chain of semicontinuous volcanic activity for about 30 million years, until a sudden pivot occurred over the course of a few million years or less. The bend is a record of that pivot. Why did this happen? The tectonic plates are all interconnected, so any change in the movement of one plate causes adjustments in them all. Thirty million years ago, Australia broke away from Antarctica and started its current path north across the Pacific Ocean. Whereas the Pacific plate had been moving directly north before the bend, Australia’s breakaway in the western Pacific caused the motion of the Pacific plate to deflect toward the northwest after the bend. No plate is moving alone and each plate interacts with its neighbors along their shared boundaries. Plate tectonics is the dance of all plates and the seven major continents (or eight, depending on how you define them) they carry, constituting a global choreography, with dozens of smaller plates in between.

The earliest understanding of plate movement was the sixteenth-century idea of “continental drift”—that the continents migrated like rafts slowly into their current position, floating on an imperceptible layer within the earth. But this theory was largely written off because it was not clear what sort of mysterious substratum the continental rafts would be floating on. By the beginning of the last century, we still knew very little about the interior of the earth. Eventually, as seismology— the study of inner Earth using the vibrations generated from earthquakes— developed and submarines were put to good use after World War II to map the seafloor, the hypothesis of plate tectonics changed geology forever. Breaking Earth’s seemingly rigid surface into an interlocking mosaic of different plates that pushed and pulled each other provided a unified explanation for the origin of many of Earth’s great geological features, such as mountains, volcanoes, earthquakes, and oceans. But as exciting as the early plate tectonic revolution was, it didn’t have all the answers. For example, the hot interior of the earth was likely convecting, in a movement driven by temperature changes, just like the circulation of air in the atmosphere; but how these deep convective cells related to the push and pull of the plates at Earth’s surface would remain elusive for decades—and the details of this interaction are still unsolved.