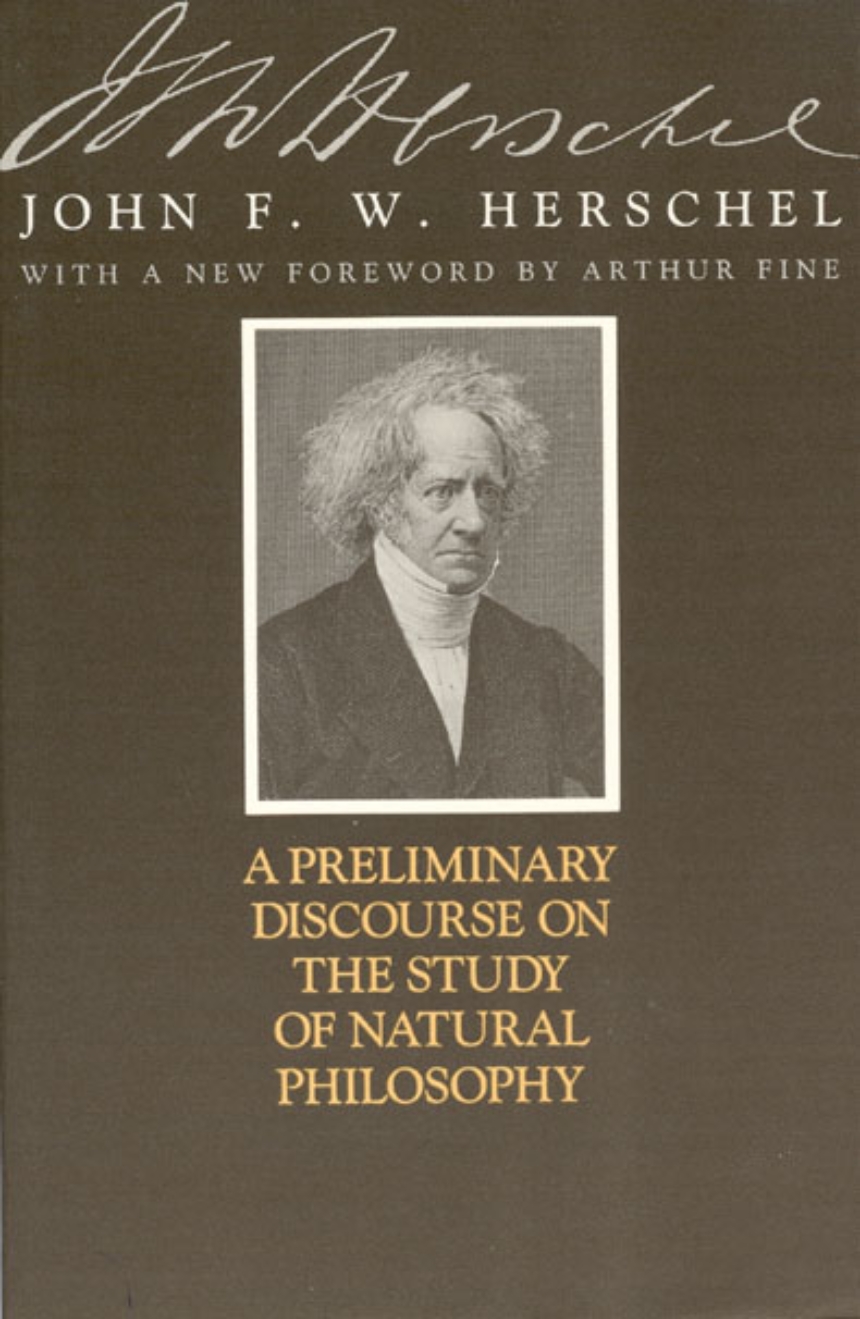 A Preliminary Discourse on the Study of Natural Philosophy

A Preliminary Discourse on the Study of Natural Philosophy

Originally published in 1830, this book can be called the first modern work in the philosophy of science, covering an extraordinary range of philosophical, methodological, and scientific subjects.

Part I.
Of the General Nature and Advantage of the Study of the Physical Sciences
1. Of Man regarded as a Creature of Instinct, of Reason, and Speculation.—General Influence of Scientific Pursuits on the Mind.
2. Of abstract Science as a Preparation for the Study of Physics.—A profound Acquaintance with it not indispensable for a clear Understanding of Physical Laws.—How a Conviction of their Truth may be obtained without it.—Instances.—Further Division of the Subject.
3. Of the Nature and Objects, immediate and collateral, of Physical Science, as regarded in itself, and in its Application to the practical Purposes of Life, and its Influence on the Well-being and Progress of Society.
Part II.
Of the principles on which physical science relies for its successful prosecution, and the rules by which a systematic examination of nature should be conducted, with illustrations of their influence as exemplified in the history of its progress.
1. Of Experience as the Source of our Knowledge.—Of the Dismissal of Prejudices.—Of the Evidence of our Senses.
2. Of the Analysis of Phenomena.
3. Of the State of Physical Science in General, previous to the Age of Galileo and Bacon.
4. Of the Observation of Facts and the Collection of Instances.
5. Of the Classification of Natural Objects and Phenomena, and of Nomenclature.
6. Of the First Stage of Induction.—The Discovery of Proximate Causes, and Laws of the lowest Degree of Generality, and their Verification.
7. Of the higher Degrees of Inductive Generalization, and of the Formation and Verification of Theories.
Part III.
Of the Subdivision of physics into distinct branches, and their mutual relations.
1. Of the Phenomena of Force, and of the Constitution of Natural Bodies.
2. Of the Communication of Motion through Bodies.—Of Sound and Light.
3. Of Cosmical Phenomena.
4. Of the Examination of the material Constituents of the World.
5. Of the Imponderable Forms of Matter.
6. Of the Causes of the actual rapid Advance of the Physical Sciences compared with their Progress at an earlier Period.