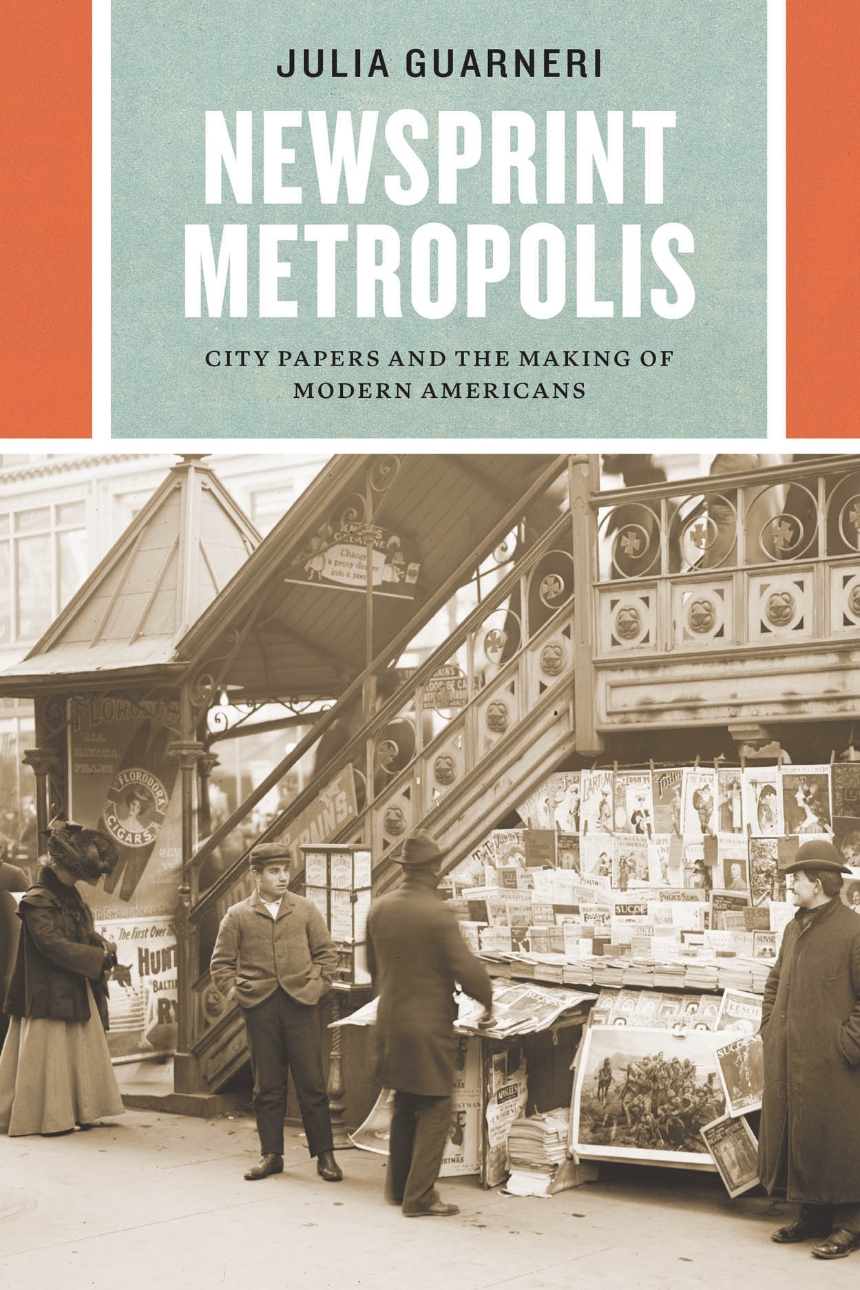 City Papers and the Making of Modern Americans

City Papers and the Making of Modern Americans

Newsprint Metropolis offers a tour of American newspapers in their most creative and vital decades.  It traces newspapers’ evolution into highly commercial, mass-produced media, and assesses what was gained and lost as national syndicates began providing more of Americans’ news.  Case studies of Philadelphia, New York, Chicago, and Milwaukee illuminate the intertwined histories of newspapers and the cities they served.  In an era when the American press is under attack, Newsprint Metropolis reminds us how papers once hosted public conversations and nurtured collective identities in cities across America.

“Impressive. . .Julia Guarneri makes a convincing case that newspapers played an essential role in American life during the late nineteenth and early twentieth centuries. . .This book will likely become the definitive study of turn-of-the-century newspapers. . .It will also appeal to those seeking a prehistory to the news media of the twenty-first century.”

“In her wonderful new book, Julia Guarneri returns us to the salad days of the mass daily at the turn of the twentieth century. . . Guarneri is a skilled and loving reader of old newspapers. Newsprint Metropolis provides an excellent depiction of a now-distant era of booming cities and booming newspapers, and an insightful account of the modern life-styles they brought into being.”

The Journal of American History

“An ambitious, engaging, and persuasive history of this most quintessentially metropolitan institution. . . . Guarneri makes a compelling argument that urban newspapers were a creative force that helped forge a modern, metropolitan social order in the United States. Her emphasis on readers is especially welcome. . . . She makes creative use of circulation data, commentary, letters, and surveys. . . . Guarneri shrewdly
infers reading experiences from the way newspapers were organized and written.”

The Journal of the Gilded Age and Progressive Era

“As social history, Newsprint Metropolis offers a deeply sourced and engaging account of the complicated relationship between newspapers and cities, and the ways in which the two intersected. . .One of the strengths of Newsprint Metropolis is Guarneri's holistic approach with primary sources. She dives beyond front pages and intro newspaper folds, examining Sunday sections, comics, advice columns, theater sections, and business directories. And while large metropolitan dailies are covered, she does not forget the role weekly, African-American, and foreign language newspapers played in the lives of city dwellers.”

“Guarneri’s decision to examine mass-readership newspapers in four major cities allows her not only to look at the epicenter of newspaper publishing at the turn of the century—New York—but also to examine the similarities and differences in newspaper publishing in other major metropolitan markets. The result is detailed and fascinating social history, as well as a set of interlinked arguments regarding the ‘metropolitan’ and its relationship to the creation of regional and national cultures.”

Alice Fahs, author of Out on Assignment: Newspaper Women and the Making of Modern Public Space

“Beautifully written, brightly illustrated, and prodigiously researched, Guarneri’s Newsprint Metropolis will, the day it is published, become the ‘go-to’ book on the history of twentieth century American newspapers. We forget, at our peril, how important the daily newspaper was in spreading wide and far the gospel of business, the joys of consumerism, the tensions between the local and the national, and the changing gender roles that defined daily life in the decades surrounding the turn of the century. Guarneri’s new book, like all good history, brings our present into focus by illuminating some essential, but nearly forgotten aspects of our past.”

David Nasaw, author of The Chief: The Life of William Randolph Hearst

“Newsprint Metropolis is a splendid study of big city daily and Sunday newspapers at the dawn of the twentieth century. Guarneri explores the marvelously diverse universe of newspaper content and influence, from news and advertising, to comics and advice columns, to politics and popular culture. And she persuasively supports a bold claim: that newspapers were not just chroniclers but were creators of the modern American city.”

“Not in several decades has a scholar offered as comprehensive and geographically balanced an account of the American daily newspaper in its commercial and aesthetic heyday. In clear, crisp, and lively prose, at once authoritative and evocative, Newsprint Metropolis neither presumes nor demands prior familiarity with the period or the historical literature. Instead it rewards curiosity about a time when cheap daily papers anchored, expanded, and reshaped their massive readership’s sense of community and place.”

Notes
Back to top