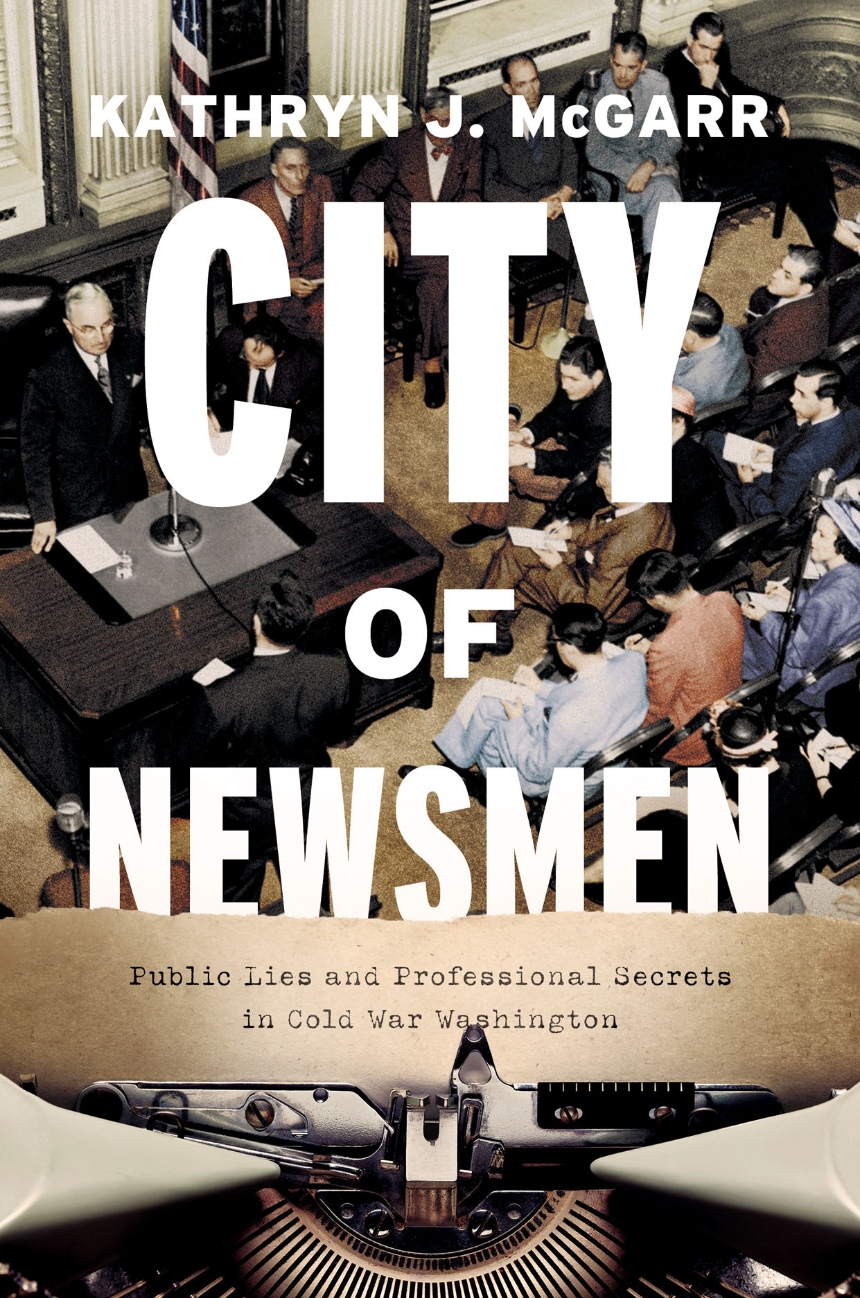 An inside look at how midcentury DC journalists silenced their own skepticism and shaped public perceptions of the Cold War.

Americans’ current trust in journalists is at a dismayingly low ebb, particularly on the subject of national and international politics. For some, it might be tempting to look back to the mid-twentieth century, when the nation’s press corps was a seemingly venerable and monolithic institution that conveyed the official line from Washington with nary a glint of anti-patriotic cynicism. As Kathryn McGarr’s City of Newsmen shows, however, the real story of what Cold War–era journalists did and how they did it wasn’t exactly the one you’d find in the morning papers.

City of Newsmen explores foreign policy journalism in Washington during and after World War II—a time supposedly defined by the press’s blind patriotism and groupthink. McGarr reveals, though, that DC reporters then were deeply cynical about government sources and their motives, but kept their doubts to themselves for professional, social, and ideological reasons. The alliance and rivalries among these reporters constituted a world of debts and loyalties: shared memories of harrowing wartime experiences, shared frustrations with government censorship and information programs, shared antagonisms, and shared mentors. McGarr ventures into the back hallways and private clubs of the 1940s and 1950s to show how white male reporters suppressed their skepticism to build one of the most powerful and enduring constructed realities in recent US history—the Washington Cold War consensus. Though by the 1960s, this set of reporters was seen as unduly complicit with the government—failing to openly critique the decisions and worldviews that led to disasters like the Vietnam War—McGarr shows how self-aware these reporters were as they negotiated for access, prominence, and, yes, the truth—even as they denied those things to their readers.

“With crisp, fluent prose and an eye for telling detail and quotations, McGarr tells an engrossing story of the Washington press during a critical time in world affairs. She sets up her tale with vivid portraits of the early capital, the evolution of the gentlemen’s club of foreign correspondents, and their close but contentious relations with US officials through the early Cold War. McGarr’s archival work has netted a wealth of revealing vignettes and quotations, smoothly woven together in her crisp writing.”

Robert Weisbrot, coauthor of The Liberal Hour: Washington and the Politics of Change during the 1960s

Washington journalism of the 1940s and 1950s suffers from at least two contradictory misconceptions. The first is that the press used to be trustworthy, and today it is not. The second is that reporters during this period were passive stenographers who trusted whatever people in power said. The Vietnam War and the Watergate scandal, this account holds, lifted a veil from reporters’ eyes: they became adversarial, savvier, more willing to question the government’s motives. The new generation of baby boomer reporters was too sophisticated to have been taken in by, say, a Henry Kissinger, unlike the gullible Greatest Generation. Of James “Scotty” Reston, who served in the New York Times’ Washington bureau from 1941 to 1989, the iconoclastic writer Gay Talese wrote, “There was little negativism or doubt in his vision, and thus his America was a positive place for right-thinking people, and God was on our side—it was as it had been during World War II.” As we will see, though, Reston expressed frequent doubt about the wisdom of both America and Americans. What went on behind the scenes as Washington newsmen created the appearance of consensus was far more complex than Talese allowed. World War II did affect how Reston saw the world, but that was true for almost everyone who lived through it and had seen the rise of totalitarianism in the 1930s. The leading reporters of the 1950s were not somehow collectively more naive than those they recruited from the Harvard Crimson to succeed them.

In a July 1993 New York Times column on the fortieth anniversary of the Korean armistice, the journalist James L. Greenfield propagated the most widely held view of the midcentury press: “For the most part, the correspondents in Korea were still awash in the patriotic fervor of World War II. For the press in general it was a less questioning, less cynical time.” These descriptors should not be treated as mutually exclusive; members of the press could be awash in patriotic fervor at the same time that they were distrustful and cynical. Indeed, the idea of what it meant to be a patriotic newsman usually included the notion that he would question the government, though often not in print. The stereotypical cynicism of a 1930s wisecracking reporter only intensified during World War II after so many reporters had disappointing experiences—sometimes as newsmen, sometimes as propagandists—with government information practices and censorship. They were more distrustful and more cynical but also less sure of how best to prevent the next world war.

For most of the newsmen who went on to cover postwar foreign policy, the patriotism of World War II was hardly a flag-waving nationalism. As a cohort, they instead believed in a very conscious internationalism, which for them meant an alignment of the nation’s well-being with Western Europe, specifically Great Britain and France. Through their work, they advocated on behalf of an internationalism based in the Atlantic Community. Moreover, in the homogenous world of like-minded white men that they intentionally created across Washington, they constantly reinforced the rightness of their views and developed private spaces in which to work through them.

Still, this period before Vietnam and Watergate is believed to be unique in the annals of press history for its “short-lived patriotic collaborations” during an “era of good feelings,” as Max Frankel, a longtime New York Times reporter, editor, and columnist put it in his memoir. About the 1960 U-2 spy plane incident, during which an American pilot was captured in the Soviet Union, he wrote that “Washington mindlessly issued the customary cover story” about a weather plane veering off course. “Probably for the last time in the Cold War, American reporters assumed that their government was telling the truth.” He—and other journalists who echoed this sentiment in memoirs and oral histories—had it wrong. Reporters in Washington rarely assumed their government was telling the truth, nor did they unself-consciously repeat what their government sources told them. In this case, most of the men at the top newspapers had known for years that the United States had spy planes entering Soviet airspace, so they did not believe stories about off-course weather planes or the many other fictitious accounts. This postwar period was not an era of good feelings but one of friction—among reporters and between reporters, editors, publishers, and public officials.

With this book, I venture to add some nuance to our understanding of midcentury foreign policy reporters, who have been treated historically—at times by their own later accounts—as patriotic dupes rather than men who struggled through the problems of covering a world armed with nuclear weapons. Total destruction remained foremost in the minds of the generation that had witnessed the atomic explosions in 1945. Not doing anything to trigger the next war, which could be the final one, was central to journalistic responsibility from 1945 to 1963, when the United States and the Soviet Union negotiated a nuclear test ban treaty.

Reporters did not suffer from the false consciousness so often attributed to them. They constantly discussed the difficulties of reporting the news objectively, an ideal they knew was unattainable. They knew that the official version of events was not always true—that the government, in fact, lied—and readily acknowledged that news about foreign policy came through a filter. In 1952, a St. Louis Post-Dispatch reporter based in Washington lamented, “More and more of our foreign news these days is reaching our readers as screened or filtered through either the State Department or the Pentagon. Too few of our correspondents are equipped, or will take the trouble, to go out and get their stuff first-hand.” The exigencies of daily reporting, combined with a sense of responsibility for preserving the peace after World War II, determined much of what the public read far more often than any ideological considerations like anticommunism.

Throughout this book, I use the words men and newsmen. Women populated many Washington spaces, and some of them were journalists. However, the men who covered foreign policy actively excluded women reporters as well as reporters of color. Using their language—newsmen, newspapermen, or Timesmen, as those who worked for the New York Times called themselves—helps us understand how they thought. Newspapers could not risk assigning a woman to cover the European Defense Community in 1954 when she would not be able to attend the National Press Club luncheon at which the French premier spoke or gain access to the private “smoker” for him later that evening at the home of Eugene Meyer, the chairman of the board of the Washington Post. These newsmen were also white. Since Washington remained segregated, white-owned newspapers would not risk that their reporter might be excluded from a newsworthy event because of his race. News organizations from other countries did assign women to cover the State Department, since as foreigners they would not be included in private sessions, regardless of their sex. When the new secretary of state held a large press reception in February 1961, the guest list was submitted as “the following newsmen,” since out of 197 invitees, only 10 were women, 6 of whom worked for international news organizations. Yes, some influential women worked in Washington, but this is not their story—the story of the exceptions to the rule. This is the story of the rule.