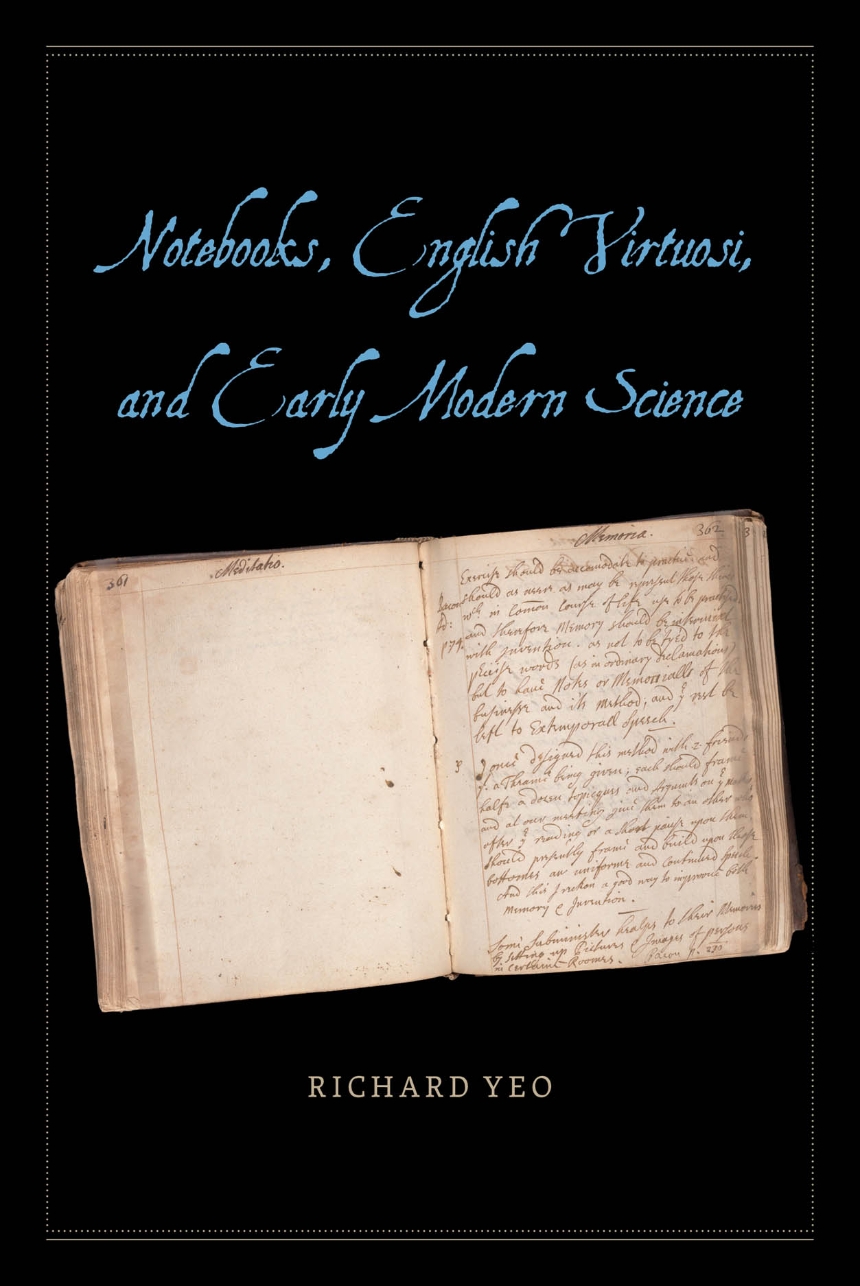 In Notebooks, English Virtuosi, and Early Modern Science, Richard Yeo interprets a relatively unexplored set of primary archival sources: the notes and notebooks of some of the leading figures of the Scientific Revolution. Notebooks were important to several key members of the Royal Society of London, including Robert Boyle, John Evelyn, Robert Hooke, John Locke, and others, who drew on Renaissance humanist techniques of excerpting from texts to build storehouses of proverbs, maxims, quotations, and other material in personal notebooks, or commonplace books. Yeo shows that these men appreciated the value of their own notes both as powerful tools for personal recollection, and, following Francis Bacon, as a system of precise record keeping from which they could retrieve large quantities of detailed information for collaboration.
The virtuosi of the seventeenth century were also able to reach beyond Bacon and the humanists, drawing inspiration from the ancient Hippocratic medical tradition and its emphasis on the gradual accumulation of information over time. By reflecting on the interaction of memory, notebooks, and other records, Yeo argues, the English virtuosi shaped an ethos of long-term empirical scientific inquiry.

"Nuanced and compelling. . . . A highly original contribution to a series of recent works that augment the picture of how empirically grounded scientific thinking grew and functioned in early modern England."

"Yeo has delivered an excellently researched and beautifully crafted book. In its painstakingly detailed analysis of the practices of note-taking of the early Royal Society, Notebooks, English Virtuosi, and Early Modern Science is an important addition to recent work on paper technologies. Here is the evidence that the new sciences of the seventeenth century could not be made without paper—books and texts. This is a thought-provoking book, especially in making us think about what 'empirical' means. We can expect much more exciting work on practices of note-taking and notebooks in contexts other than that of the early Royal Society in the coming years, but it will be impossible to write them without taking note of the insights offered by Yeo in this significant work."

"Whether in digital applications, composition journals, artists’ notebooks, or in the margins of books, readers use notes to manage attention, to record, to observe, to argue, and to deride. This note-taking has a history, as Yeo deftly shows in his ground-breaking book Notebooks, English Virtuosi, and Early Modern Science. It is a remarkable achievement. His research amply demonstrates that notebooks are not simple records of information, but instead 'stimulate recollection and thought.' The feedback loop between materiality and mind was especially evident in the period of which Yeo writes, poised at it was between traditional humanistic practices and emergent scientific methods."

"Yeo’s prose is always clear and to the point, often lively and blessedly free of jargon or arcane esoterica. . . . Anyone who has struggled to devise and maintain their own system of working notes is likely to find much of interest in these pages; the conceptual and practical difficulties of handling information which our distant predecessors encountered inevitably encourage reflection on one’s own practices."

"Yeo should be commended for his exquisite and meticulous scholarship. With a bibliography tallying over 650 items, instructive visuals, and penetrating primary source analyses, his book represents a substantial achievement. Its intellectual vision should be of interest not only to researchers of early modern Europe, but also to anyone curious about cognitive transformations, the social implications of recordkeeping, the evolution of reading practices, the enduring impact of Francis Bacon, or the effects of information overload in a historical context. Notebooks, English Virtuosi, and Early Modern Science also helps reveal that that the history of science should be seen as a subset of a more holistic intellectual history that details how people from many walks of life dealt with organizing knowledge. Yeo’s volume brilliantly uncovers uncharted connections between writing and thinking that indelibly transformed seventeenth century life."

"Yeo breaks new ground in making sense of the manuscripts left behind by a series of major figures including John Beale, Robert Boyle, Samuel Hartlib, Robert Hooke, and John Locke. . . . essential reading for anyone studying the early Royal Society or seventeenth-century natural philosophy. The questions it raises, moreover, are much wider in scope than its apparent focus on a small circle of canonical figures. Yeo has made an important contribution to the study of early modern information management practices and his cautious, insightful reconstruction of notebooks and note-taking, together with his determination to unpack the semantic subtleties of contemporary actors’ categories, make this a book which should inform the research of intellectual historians working on a wide variety of times, places, and texts."

"Yeo’s monograph is a well-written, lucid, and timely study of an important topic....One can only wish that Yeo’s book will be read widely both by an expert and student audience, and that it will
stimulate similar studies of other, less famous seventeenth-century naturalists and their
collective endeavors."

"This detailed and stimulating study, drawing on an impressive array of manuscript material, will be essential reading for anyone interested in note-taking, memory, or English science in the early modern period....sheds invaluable light on individuals who would prove important for establishing conventions of scientific reportage."

Erudition and the Republic of Letters

"Behind most great books lies a great set of notes--typically left unnoticed or neglected unto loss. In this delightfully innovative and lucidly written study, Yeo opens a whole new perspective on the central figures of the Royal Society in the seventeenth century by delving deeply into the surviving evidence of their note-taking. Whether messy or neat, kept on loose sheets or in notebooks, notes were essential tools for Baconian empiricism, which served to relieve the memory and to facilitate collaboration with others."

"In this book, Yeo gives a vivid and insightful account of note-taking in scientific circles in seventeenth-century England, dealing both with well-known figures like Robert Boyle and John Locke and lesser men like Thomas Harrison and John Beale. He stresses how Francis Bacon’s emphasis on the accumulation of empirical information complicated the inherited humanist tradition of ’commonplacing,’ and he has very interesting things to say about the way in which memory and note-taking are interrelated. The book reaches a climax with Yeo’s account of Robert Hooke’s vision, in the context of the early Royal Society, of a databank that might be both cumulative and analytic."

“Lively and learned, Yeo’s book opens new vistas on early modern science and scholarship. Through a careful examination of scientific notes and note-taking, he shows how the virtuosi of the seventeenth century retooled old scholarly conventions for new empirical applications and created new ways of managing and sharing information. Yeo’s book at once illuminates the deep history of our information culture and the striking novelties of seventeenth-century science.”

“Yeo has written a learned, lively, and provocative book. He shows us that the English virtuosi of the seventeenth century—long famed as the creators of a new method for studying the natural world—learned their ways of capturing, storing, and accessing observations of nature from erudite humanists, who had devised them for making excerpts from books. Two hundred years and more into the age of print, a cultivated memory and a carefully cultivated set of notebooks remained as central to the practices of many innovative natural philosophers as they had been to those of scholars like Petrarch and Erasmus. Yet, as Yeo also makes clear, these virtuosi compiled and understood their records in novel ways. In building their sets of data, Robert Hooke and others came to see the study of nature as a long-term enterprise, necessarily disciplined and collaborative—and to envision notebooks not only as an aid to memory and reflection, but also as part of a formal archive that would grow and change and serve the creation of new theories for generations to come.”

"Underlying Yeo's study is the fundamental question: if the project of the English virtuosi was the reform of natural knowledge, and healthy scepticism towards classical authority and received wisdom its watchword, did they approach the methods and processes of humanistic and scholastic learning as cautiously as they did its data? He opens with the classic site of early modern polite learning, the commonplace book. Yeo points to the startling rhetorical continuity that represented the first English encyclopedias and scientific periodicals in the late seventeenth and early eighteenth centuries as arising from, or extending, personal commonplace books, and his study is a brilliantly detailed account of what the durability of the metaphor represented in practice."