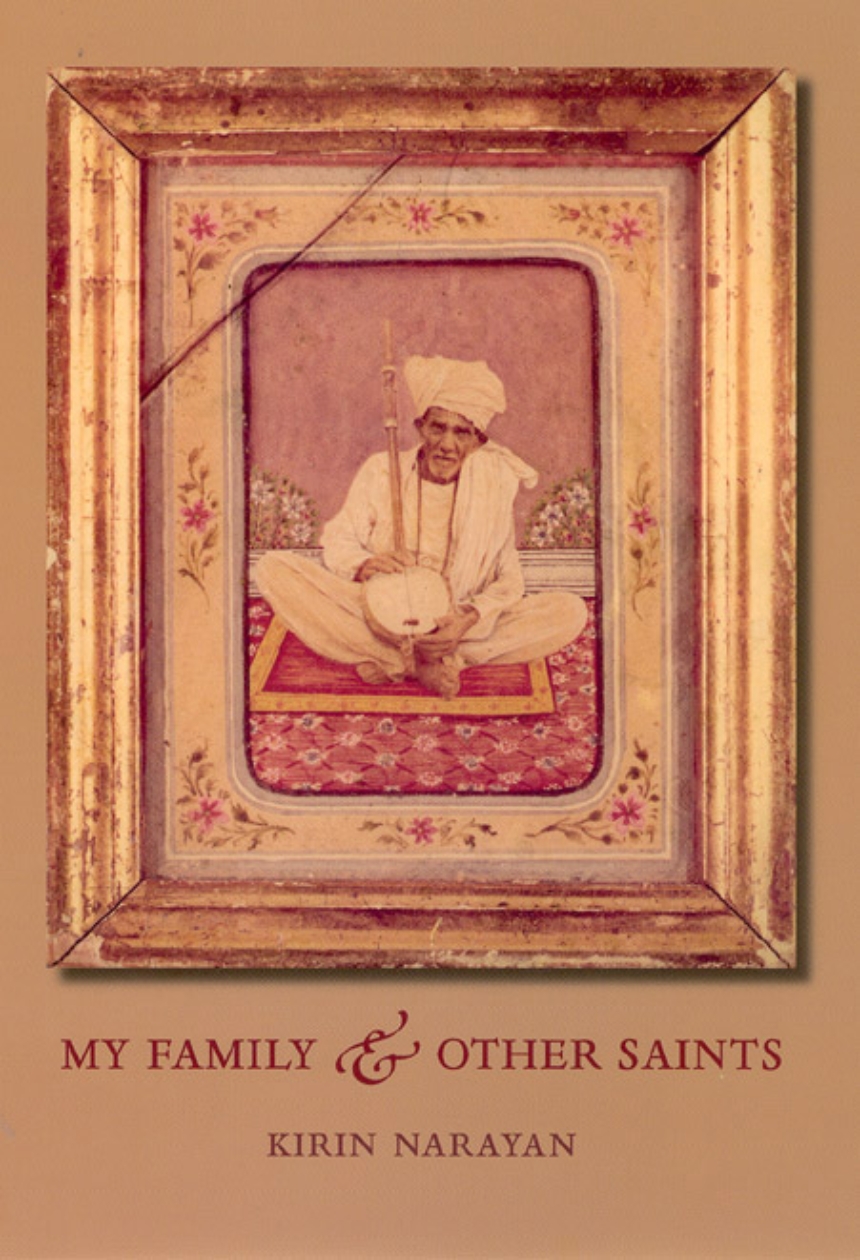 My Family and Other Saints

My Family and Other Saints

In 1969, young Kirin Narayan’s older brother, Rahoul, announced that he was quitting school and leaving home to seek enlightenment with a guru. From boyhood, his restless creativity had continually surprised his family, but his departure shook up everyone— especially Kirin, who adored her high-spirited, charismatic brother.
A touching, funny, and always affectionate memoir, My Family and Other Saints traces the reverberations of Rahoul’s spiritual journey through the entire family. As their beachside Bombay home becomes a crossroads for Westerners seeking Eastern enlightenment, Kirin’s sari-wearing American mother wholeheartedly embraces ashrams and gurus, adopting her son’s spiritual quest as her own. Her Indian father, however, coins the term “urug”—guru spelled backward—to mock these seekers, while young Kirin, surrounded by radiant holy men, parents drifting apart, and a motley of young, often eccentric Westerners, is left to find her own answers. Deftly recreating the turbulent emotional world of her bicultural adolescence, but overlaying it with the hard-won understanding of adulthood, Narayan presents a large, rambunctious cast of quirky characters. Throughout, she brings to life not just a family but also a time when just about everyone, it seemed, was consumed by some sort of spiritual quest.
“A lovely book about the author’s youth in Bombay, India. . . . The family home becomes a magnet for truth-seekers, and Narayan is there to affectionately document all of it.”—Body + Soul
“Gods, gurus and eccentric relatives compete for primacy in Kirin Narayan’s enchanting memoir of her childhood in Bombay.”—William Grimes, New York Times

“A lovely book about the author’s youth in Bombay, India. Her stable family is rattled when the author’s older brother announces he’s off to seek wisdom from a guru. Their mother’s all for it; their father’s skeptical. The family home becomes a magnet for truth-seekers, and Narayan is there to affectionately document all of it.”

"When the 16-year-old son and brother of a liberal urban family in Bombay becomes enamored of gurus and holy men, the family responds in various ways. The sari-wearing American-born mother, who loves all things Indian, embraces her son’s quest. The Indian father does not trust anything that comes attached to religion or mysticism. Throughout, the house is continuously bursting with visiting Westerners seeking enlightenment. The memoir, written through the younger sister’s eyes, is informed by her professional anthropologist’s view: she brings the food, clothing, and colors of the unique period in the late 1960s to life. She is to be commended for her ability to re-create the era and populate it with a host of colorful characters: visitors, locals, the holy, and, of course, relatives, both American and Indian. They are supported by wonderful photos and her wry observations. A revealingly honest, humorous, and loving portrayal of unique times makes this a splendid read."

“My Family and Other Saints echoes Gerald Durrell’s classic memoir, My Family and Other Animals, not only in its title, but in its wonderful humor and lyrical prose. Like Durrell, Kirin Narayan takes the reader to a fascinating world far from our own, and brings to life its myriad sights, sounds and smells, while revealing the profound cultural beliefs of its people. India is just the most complex character among a cast of characters—family members, gurus, hippies, and neighbors—all of whom I now count as old friends.”--Judith Barrington, author of Lifesaving: A Memoir and Writing the Memoir: From Truth to Art

"An engrossing account of a childhood spent with Indian gurus and their American disciples. Enlightenment and growing up are tossed together in the riotous and tender household presided over by Didi, Narayan, and an extended circle of family and friends. Kirin Narayan’s impressive gifts of memory, imagination, and storytelling  carry us into this unexpected world of ’crazy saints;’ the journey is so much fun that it’s hard to put the book down."

Anna Lowenhaupt Tsing, author of In the Realm of the Diamond Queen

"Kirin Narayan brings her detailed powers of observation and nuanced description, together with her insightful and humorous appreciation of human beings as quirky individuals and products of their cultures, to present us with a few years in the history of her own family. These are extraordinary years and an extraordinary family, and this delightful and unique memoir documents much more than growing up acutely observant in a turbulent household. It also brings to life an era now almost mythical, when American and European hippies and seekers poured into India looking for many kinds of experiences. I loved this book."

"Narayan has created a portrait of [her family] that is realistic in its depiction of their flaws and foibles but generous and always loving. . . . Narayan . . . finds the wonder and joy in her family’s journey and presents it to us with insight and grace."