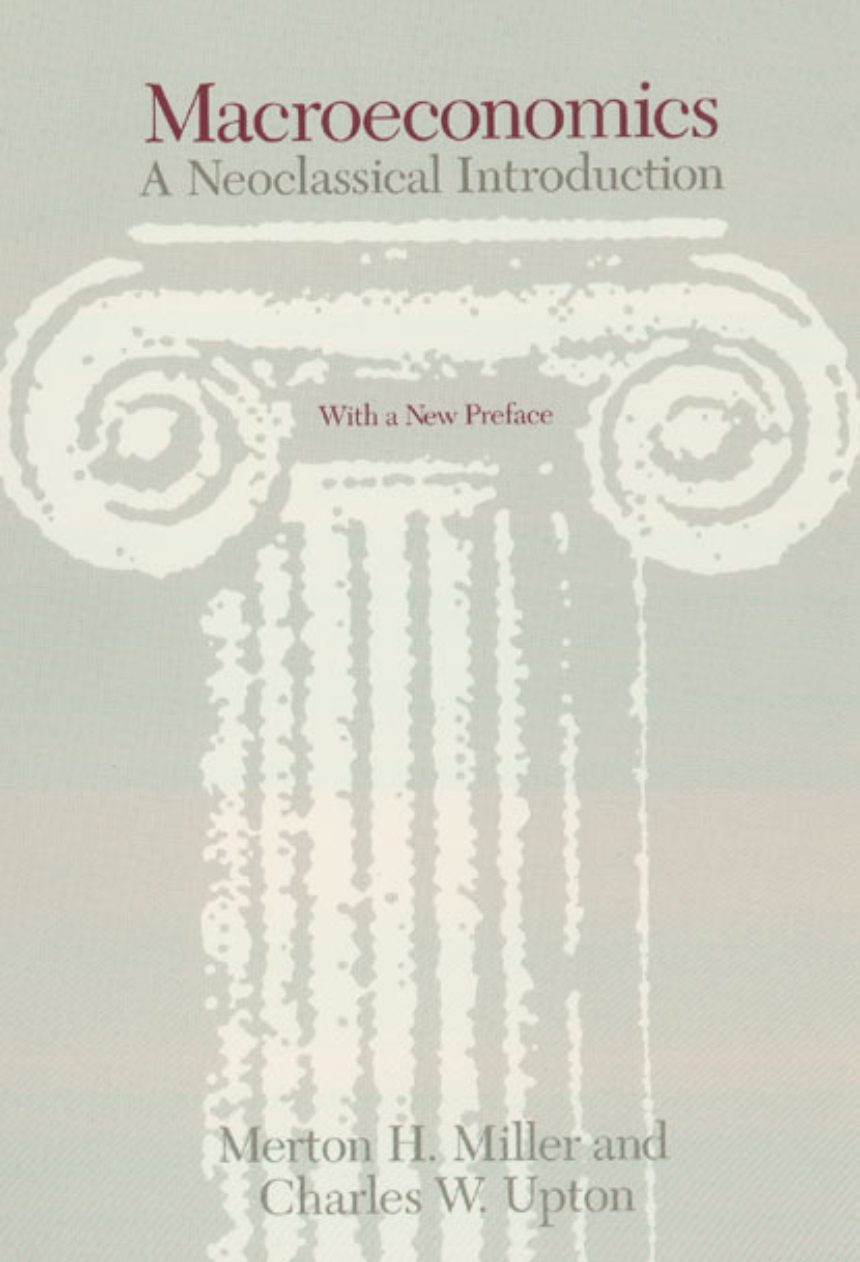 "Miller and Upton is by far the most cited macroeconomics text in front line academic research journals over the last ten years. It has become a contemporary classic."—Roger C. Kormendi, University of Michigan

"The most innovative approach to introducing macroeconomics that I have seen. . . . A ’classic’ in the sense that every serious student of macroeconomics is likely to want it in his or her library."—John P. Gould, University of Chicago

"The task the authors set out to perform is ambitious: to write a macroeconomics textbook structured around a neoclassical growth model. And in this task they have succeeded."—Clifford W. Smith, Jr., Journal of Finance

"This is a superb book. As a vehicle for teaching economics I have to place it right behind Henderson and Quant (Microeconomics) and Dorfman, Samuelson, and Solow (Linear Programming). Moreover, it is an exciting book both to read and to think about. . . . It is not just that these authors have something to say, but their way of saying it is generally superior."—F. E. Banks, Kyklos

Preface, 1986
Preface
Section One - The Neoclassical Theory of Economic Growth and Production
1. An introduction to macroeconomic reasoning: The Malthusian model
The Malthusian model
The equilibrium population size and standard of living
The policy prescriptions of the Malthusian model
Where does the Malthusian model stand today?
2. The neoclassical model of economic growth
Capital as a factor of production
Production, income and the accumulation of capital
The neoclassical model of economic growth
3. Some further properties of the neoclassical model
The demand for and the price of capital services
Factor proportions and the relative compensation of the factors
Technological change and the neoclassical model
Appendix: Mathematical properties of the neoclassical model
Bibliography for Section One
Section Two - Consumption and Saving
4. The microeconomic foundations of aggregate saving and consumption functions
Introduction: Some historical background
Consumption, saving and the life cycle
The basic Fisherian model of the savings decision
The basic model in algebraic form
Appendix: Derivation of the consumption function
5. Some properties of the life-cycle model of consumption
Consumption over the life cycle: Some numerical examples
Essential properties of the life-cycle consumption function
The response of consumption to unanticipated changes in income and wealth
Concluding observations
Appendix: The permanent income hypothesis
6. The neoclassical model with a life-cycle consumption function
Steady-state equilibrium properties
The adjustment to steady state
Demographic variables and the equilibrium saving rate
Bibliography for Section Two
Section Three - Government Finance
7. The macroeconomics of taxation
Modeling the public sector
Tax policy and the equilibrium capital stock
8. The burden of the debt
Does the debt make a difference?
Implications of an increase in the debt on consumption and investment decisions
Deficit financing as a permanent policy
Appendix: An application to social security
Bibliography for Section Three
Section Four - Money and the Price Level
9. The microeconomic foundations of the demand for money
Introduction
The essential properties of the demand function for money
10. A consumption interpretation of the demand for money
A life-cycle demand function for money
The basis of the demand function for money
Money holdings and consumption over the life cycle: Some numerical illustrations
Appendix: Derivation of the demand function for money
11. The Quantity Theory of Money
The effect of an unanticipated change in the supply of money
The Quantity Theory of Money
The formation of inflationary expectations
12. Money and the price level in a growing, full employment economy
The anatomy of long-run equilibrium in a monetary economy
The response to changes in the rate of growth of the money supply
13. Inflation as a tax
Money creation as a revenue device
The optimal rate of money creation
14. Fiscal policy and the price level
The effects of an increase in government spending
Must an increase in government spending be inflationary?
Is deficit financing more inflationary than tax financing?
15. Money and banking
The business of banking
Monetary equilibrium with inside and outside money
The fatal flaw in a fractional reserve banking system
Central banks and the management of a fractional reserve banking system
A further look at some of the assumptions
Bibliography for Section Four
Section Five - Unemployment
16. The microeconomic foundations of unemployment
Price adjustment in a single market
Unemployment in the labor market
17. The impact of monetary and fiscal policies on unemployment in the short run and the long
Short-run equilibrium with sticky wage rates
Fiscal and monetary policies for reducing unemployment: The conventional wisdom
The trouble with conventional wisdom
Is there a long-run Phillips curve?
Bibliography for Section Five
Index