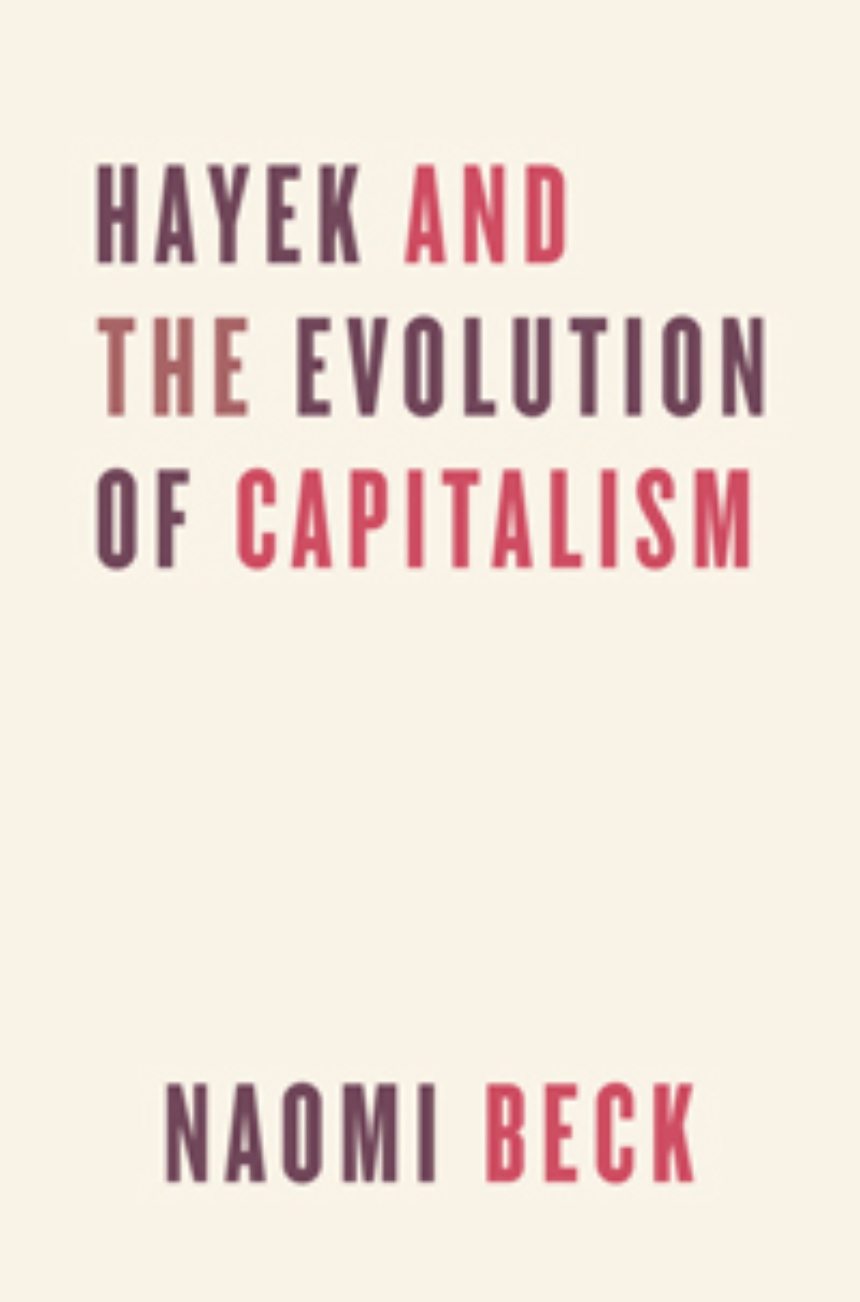 Hayek and the Evolution of Capitalism

Hayek and the Evolution of Capitalism

Few economists can claim the influence—or fame—of F. A. Hayek. Winner of the Nobel Prize, Hayek was one of the most consequential thinkers of the twentieth century, his views on the free market echoed by such major figures as Ronald Reagan and Margaret Thatcher.

Yet even among those who study his work in depth, few have looked closely at his use of ideas from evolutionary science to advance his vision of markets and society. With this book Naomi Beck offers the first full-length engagement with Hayek’s thought from this perspective. Hayek argued that the capitalism we see in advanced civilizations is an unintended consequence of group selection—groups that adopted free market behavior expanded more successfully than others. But this attempt at a scientific grounding for Hayek’s principles, Beck shows, fails to hold water, plagued by incoherencies, misinterpretations of the underlying science, and lack of evidence. As crises around the globe lead to reconsiderations of the place of capitalism, Beck’s excavation of this little-known strand of Hayek’s thought—and its failure—is timely and instructive.

"Naomi Beck has done a brilliant task of explicating Hayek's use of a cultural argument emphasising group selection as the impulse to understanding the decentralised market order. . . . Beck's book offers the best systematic exploration of this aspect of Hayek's thinking to date. . . . Beck's overview of Hayek's notion of cultural evolution still, and I would say more than she gives credit, enjoys a huge relevancy in such areas as, for example, histories on the origins of the Industrial Revolution. Beck's excellent book is an important addition to our understanding of Hayek's work, and his impact upon economics and economic history."

"This brief volume offers a critical memorial for Hayek, the free-market prophet, from the perspective of his later works. . . . Recommended."

"An all-out critique of Hayek’s appeal to 'group selection' (i.e., economies that survived because they were the fittest and most unplanned). With razor-sharp acumen, Beck systematically dismantles a host of inconsistencies and contradictions within this particular strain of Hayek’s thought, thereby casting a shadow on unbridled capitalism in the modern world. . . . A valuable read for anyone deeply interested in the thought of Hayek and in the relationship between evolution and free-market capitalism."

"Hayek's defense of free societies has recently regained much attention. In this magnificent book Naomi Beck presents a rich and illuminating analysis of how Hayek's ideas were formed. Her critical reconstruction is a must-read for everyone interested in an authentic portrayal of this great twentieth-century thinker."

“This is a beautifully presented critique—in the classic sense of the word—of some of Friedrich Hayek’s later work on the evolution of liberal capitalism. Throughout, Beck imparts a clarity to Hayek’s theory of cultural evolution that can sometimes remain elusive in Hayek’s own writings. It will prove incredibly useful and illuminating for readers from backgrounds in intellectual history, the history of science, and the history of economic thought.”