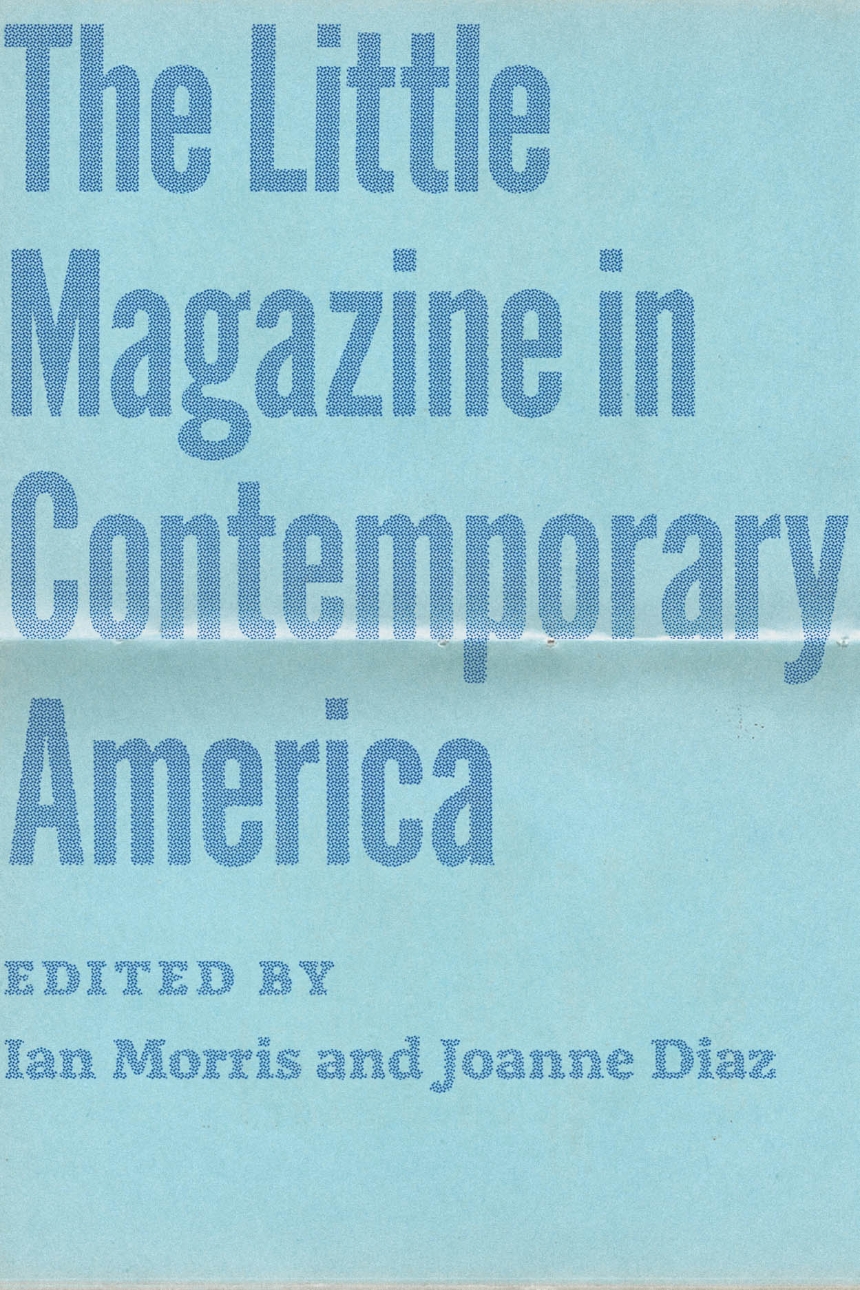 The Little Magazine in Contemporary America

The Little Magazine in Contemporary America

Little magazines have often showcased the best new writing in America. Historically, these idiosyncratic, small-circulation outlets have served the dual functions of representing the avant-garde of literary expression while also helping many emerging writers become established authors. Although changing technology and the increasingly harsh financial realities of publishing over the past three decades would seem to have pushed little magazines to the brink of extinction, their story is far more complicated.

In this collection, Ian Morris and Joanne Diaz gather the reflections of twenty-three prominent editors whose little magazines have flourished over the past thirty-five years. Highlighting the creativity and innovation driving this diverse and still vital medium, contributors offer insights into how their publications sometimes succeeded, sometimes reluctantly folded, but mostly how they evolved and persevered. Other topics discussed include the role of little magazines in promoting the work and concerns of minority and women writers, the place of universities in supporting and shaping little magazines, and the online and offline future of these publications.

“A thoughtful and much-needed champion of the vitality and creativity of literary journals today.”

"The Little Magazine in Contemporary America, a much more manageable collection of interviews and essays that was published in April, looks at the years since then, the years that included—so say the book’s editors, Ian Morris and Joanne Diaz— “the end of the ascendancy of print periodicals,” meaning that the best small litmags have moved online....A new journal needs a reason to exist: a gap that earlier journals failed to fill, a new form of pleasure, a new kind of writing, an alliance with a new or under-chronicled social movement, a constellation of authors for whom the future demand for work exceeds present supply, a program that will actually change some small part of some literary readers’ tastes. None of this has changed with the rise of the Web. Nor has the other big truth about little magazines which emerges from Diaz and Morris’s book, or from a day spent with anybody who runs one: it’s exhausting, albeit exciting, to do it yourself."

“It’s been thirty-five years since the last comprehensive examination of little magazines, during which time the advent of the Internet and evolving publishing constrictions have presented unique challenges to these little engines that could. Morris and Diaz’s anthology…addresses these challenges and the ways in which many little magazines have turned them into advantages, including the opportunity for more and specialized promotion and differentiation. Public discussion and debate is essential to literary and artistic work, and these essays speak to the opportunity for this collective conversation to reach a wider audience in the digital age. The Little Magazine in Contemporary America is a welcome and compelling update, one that offers substantive hope for the future and continued significance of its subject.”

"Little magazines are crucial to the literary health of our country. Today, we are inundated with a bottom-line publishing ideal. In the face of conglomerate money culture, we need our littles more than ever. This book is essential."

"At the zenith of print culture, modernist writers aspired to renew civilization or dynamite it, to subvert consumer capitalism or make a name or a buck from it, in a relatively new print genre—the little magazine. Morris and Diaz have now asked a score of the little magazine editors and writers who have shaped our own literary culture to reflect on the present and future of the genre “during the most radical paradigm shift since the invention of movable type.” This collection reassures us that the internet not only affords new modes of writing and reading but also leaves plenty of room for print experiments—from zines and boxes of printed documents to the survivals of modernist-era or university-based magazines.  Future readers will look back to The Little Magazine in Contemporary America as a key document of the American literary periodicals of our age."

"The Little Magazine in Contemporary America is a fascinating set of responses to the two great changes in writing and reading since 1980.  The first is the internet, which has given a new face to the drive of letters toward action-for-change, enabling immediate distribution of readers’ insights in answer to the work of artists—and in answer to postings by other web readers.  A little magazine today can speak to audiences who never read the magazine itself; they can gather around the magazine’s comment sites for warmth, argument, and validation. The second great change in the world of letters during the past 35 years is the transformative effect of creative nonfiction as a cross-genre mode.  For it has encouraged heady mixtures and a renewal of rhetorical poise in the art of many fine poets and prose writers, breathing delight into the work of making it new."

"Little magazines, known for their experimental nature and independent spirit, are the focus of this absorbing collection of essays, written by leading editors working over the past thirty years. This fascinating anthology brings to life the literary, cultural, and political landscapes intrinsic to avant-garde publications and deepens our understanding of their immense significance. This book takes its rightful place on library shelves next to earlier classics The Little Magazine: A History and Bibliography and The Little Magazine in America.  It’s an indispensable tool for scholars and a great read!"

“The Little Magazine in Contemporary America is an important book—one that is long overdue. It provides a different perspective on the role of little magazines that is valuable and not readily available anywhere elsewhere. Particularly impressive are Jane Friedman’s and Don Share’s essays, which wrap up the entire volume brilliantly, both giving a sense of the potential for independent magazines in the future while acknowledging the rich history of the past.”