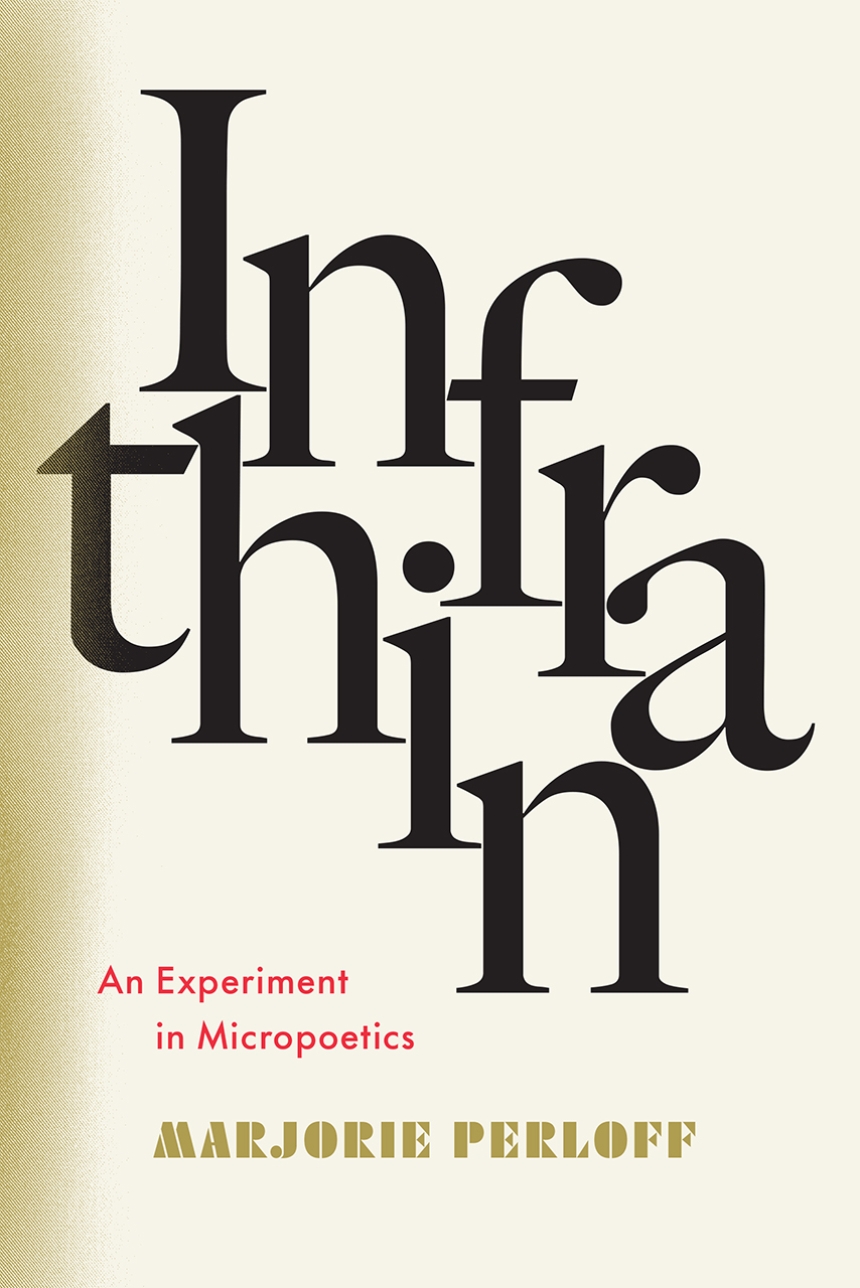 The “infrathin” was Marcel Duchamp’s playful name for the most minute shade of difference: that between the report of a gunshot and the appearance of the bullet hole, or between two objects in a series made from the same mold. “Eat” is not the same thing as “ate.” The poetic, Marjorie Perloff suggests, can best be understood as the language of infrathin. For in poetry, whether in verse or prose, words and phrases that are seemingly unrelated in ordinary discourse are realigned by means of sound, visual layout, etymology, grammar, and construction so as to “make it new.”

In her revisionist “micropoetics,” Perloff draws primarily on major modernist poets from Stein and Yeats to Beckett, suggesting that the usual emphasis on what this or that poem is “about,” does not do justice to its infrathin possibilities. From Goethe’s eight-line “Wanderer’s Night Song” to Eliot’s Four Quartets, to the minimalist lyric of Rae Armantrout, Infrathin is designed to challenge our current habits of reading and to answer the central question: what is it that makes poetry poetry?

“What is the difference between attending a botany seminar and immersing oneself in the forest in the company of a guide who passionately knows their flora and fauna? This is what one discovers by reading Perloff's Infrathin, an irresistible tour through the work of some of the main artisans of modernist and contemporary poetry, under the prism of an unusual mentor: Marcel Duchamp. A gift for lovers of the genre and a must-read for poets.”

“INFRA, not intra, and THIN, a split second so sliced, its instant infinity so spilt. Infrathink with Duchamp and Co. to step into a whole new world of differential repetitions and serial departures across the world of modern(ist) art, especially poetry. Whether you just ‘think different’ or have already ‘done différance,’ as you continue to make your way through the alreadymadeness of modern times so remade, you, too, with Marjorie Perloff, our go-to code-breaker here, will get this: how and why reading between the cracks, not just lines, matters.”

“This age of polarization needs those who build bridges—not necessarily to create unity or understanding, but to allow life-giving movement between thought and creativity. The impact of Perloff's impressive lifelong project becomes even clearer with this book: her refusal to let academic propriety constrain her and her determination to give her great intelligence free play and to follow her deepest enthusiasms. As a result, we have a book that will illuminate and give pleasure to both scholar and poet, wherever they might come from.”

"If at times this book feels like the seven conference papers or essays they previously were, reworked into chapters, and if at times Perloff makes some rather personal, associative and conjectural leaps when undertaking her poetic deconstructions, it can be forgiven in the light of surprise, intelligence and originality. I haven’t enjoyed a serious and challenging critical book like this for a long time."

Tears in the Fence

List of Figures
Preface
A Note on Scansion and Notation
Introduction: Toward an Infrathin Reading/Writing Practice
1          “A Rose Is a Rose Is a Rrose Sélavy”: Stein, Duchamp, and the “Illegible” Portrait
2          Eliot’s Auditory Imagination: A Rehearsal for Concrete Poetry
3          Reading the Verses Backward: The Invention of Pound’s Canto Page
4          Word Frequencies and Zero Zones: Wallace Stevens’s Rock, Susan Howe’s Quarry
5          “A Wave of Detours”: From John Ashbery to Charles Bernstein and Rae Armantrout
6          The Trembling of the Veil: Poeticity in Beckett’s “Text-Soundings”
7          From Beckett to Yeats: The Paragrammatic Potential of “Traditional” Verse
Acknowledgments
Notes
Index