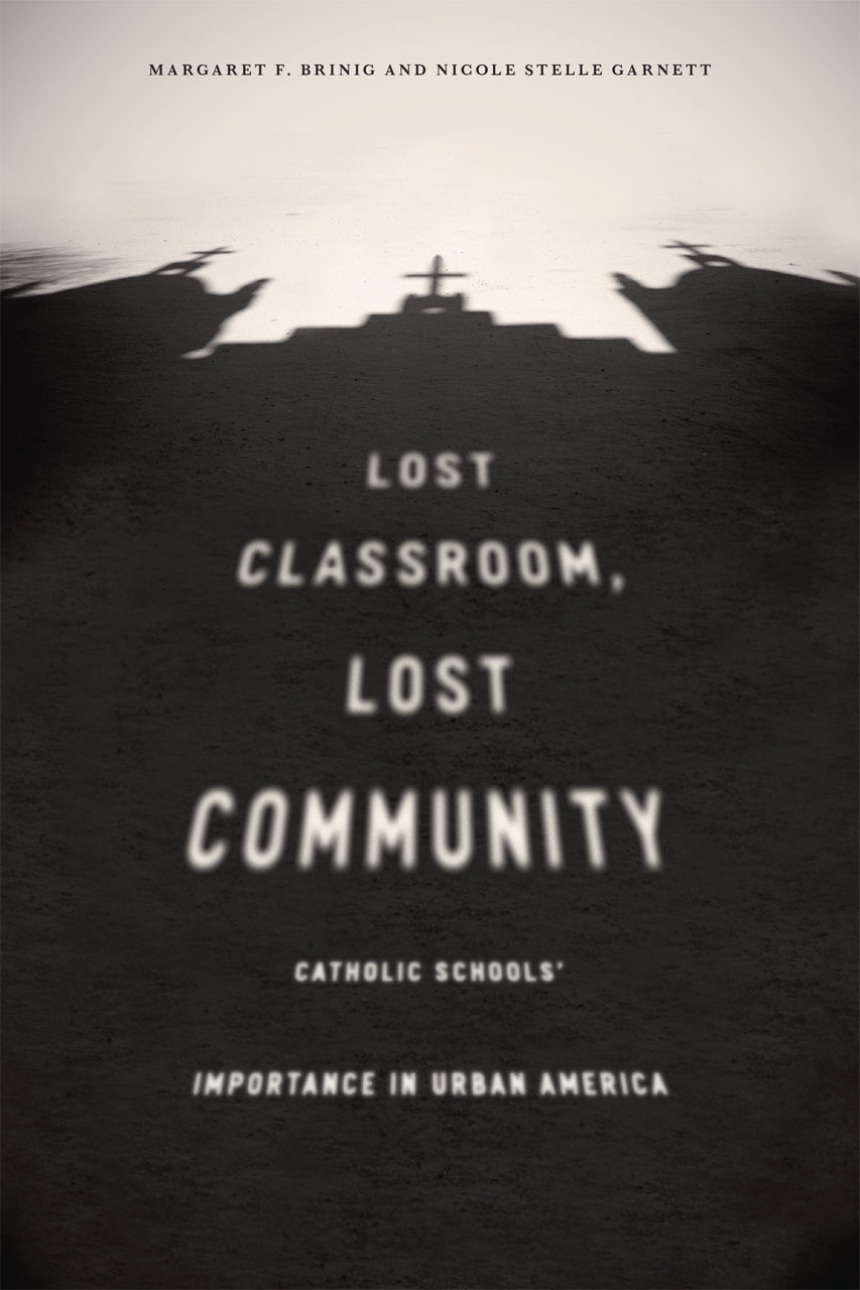 In the past two decades in the United States, more than 1,600 Catholic elementary and secondary schools have closed, and more than 4,500 charter schools—public schools that are often privately operated and freed from certain regulations—have opened, many in urban areas. With a particular emphasis on Catholic school closures, Lost Classroom, Lost Community examines the implications of these dramatic shifts in the urban educational landscape.

More than just educational institutions, Catholic schools promote the development of social capital—the social networks and mutual trust that form the foundation of safe and cohesive communities. Drawing on data from the Project on Human Development in Chicago Neighborhoods and crime reports collected at the police beat or census tract level in Chicago, Philadelphia, and Los Angeles, Margaret F. Brinig and Nicole Stelle Garnett demonstrate that the loss of Catholic schools triggers disorder, crime, and an overall decline in community cohesiveness, and suggest that new charter schools fail to fill the gaps left behind.

This book shows that the closing of Catholic schools harms the very communities they were created to bring together and serve, and it will have vital implications for both education and policing policy debates.

“The authors make the ingenious argument that they can detect the distinct influence of the closing of a Catholic school because such events are not related only to the increase of poverty and the growth of minority populations. Which schools in such areas close, they argue on the basis of detailed knowledge of how Catholic schools operate, depends on the commitment of the pastor of the parish. . . . One suspects that the effect of the Catholic school on its neighborhood is unique, as the commitments between school, teachers, administrators, parents, and students are strengthened by residence in the same neighborhood, as well as the tie of a common religion binding many of them. If Catholic schools have such effects, one must raise the question, and the authors do, of why these schools cannot get public funds: they do as good a job of educating their students as public schools, perhaps better. But while voucher programs, for example, have overcome legal prohibitions in some states, political resistance to the flow of substantial public funds to schools not under the control of districts remains intense.”

"For principals and teachers working in inner-city schools, these findings are not something new. However, this is the first time that scholars made an empirical analysis of the data to prove what was already known anecdotally."

“By all accounts, the loss of an inner-city Catholic school is a blow to its disadvantaged students. But is there more to this story? What happens to the neighborhood—the urban fabric—when the bells stop ringing once and for all? That question is probed in a groundbreaking new book, Lost Classroom, Lost Community.”

“Brinig and Garnett add another argument to the case for Catholic education: Catholic schools are essential to a community’s health, especially in inner-city neighborhoods. . . . The book . . . is about more than Catholic education or education reform—it is important for anyone interested in the health of our cities.”

“Can’t recommend it highly enough. . . . Brinig and Garnett take a novel tack. Rather than wade into academic effects, they use a rich data set of social cohesion measures and crime data from Chicago, Philadelphia, and Los Angeles to track the effect of closing Catholic schools on neighborhoods. Not to spoil the ending, but closing Catholic schools rends the fabrics of low income communities and can be linked to an increase in crime. . . . If this is the one book you read about the state of Catholic education (and school choice policy) in America, it would serve you well. But [these] findings . . . really set the book apart, and will make this required reading and citation for all interested in Catholic education for a very long time.”

“When a Catholic school closes down, education isn’t the only area that oft-times suffers. While charter schools often emerge to fill the gaps left by shuttered Catholic schools, Garnett and Brinig believe that these institutions aren’t as effective at positively impacting the community at large.”

"Lost Classroom, Lost Community provides a context for better understanding the consequences and implications of urban Catholic school closures. . . . Brinig and Garnett have conducted an original and compelling study that is a must read for scholars in the disciplines of urban education, Catholic education, educational policies, urban policies, and sociology."

“In this carefully researched book that picks up where James Coleman and others have left off, Brinig and Garnett demonstrate that [Catholic school] closures often have detrimental effects on the communities where the schools once resided, beyond the obvious loss of their educational assets. . . . The book contains up-to-date reviews of the literature on Catholic schools, charter schools, and their respective performance, growth, and decline. It includes a useful update of the legal issues and case law that apply when government provides financial support to students at religious schools. But the most relevant part of this study, for the readers of this journal in particular, is how it serves to inform the choice debate. Brinig and Garnett understand the competing narratives well, and carefully position their research so as to not overstate its significance, while advancing the choice argument just the same. . . . Brinig and Garnett have made a convincing case that massive Catholic school closures often damage communities that need all the help they can get. That should be alarming to anyone who cares about urban neighborhoods and the people who live in them.”

“Brinig and Garnett examine an oft overlooked occurrence in the educational arena: the closing of urban Catholic schools. Though they are often lumped in with private schools, Catholic schools and particularly ones in urban areas are often affected by school reform policy and public policy. Though most studies regard educational reform efforts like vouchers as financially beneficial for urban Catholic schools, this book explores those same impacts using the lens of school closures. . . . They find closing urban Catholic schools is detrimental to students, families, and the local neighborhoods, and may also increase chances of higher crime and violence in areas where schools are closed.  They further admonish policy makers to use Catholic schools as a community institution with far-reaching effects, rather than just an educational facility for students. . . . Recommended.”

“A sobering, encouraging, and challenging read.”

“An insightful new analysis. . . . Lost Classroom, Lost Community’s sobering last chapter asks readers to imagine the implications of cities without Catholic schools; the loss of quality social capital-building education in traditional neighborhoods, leaving families unable to afford alternatives to poor quality public schools struggling in the wake of others seeking refuge away from their declining neighborhoods.”

“As the important book Lost Classroom, Lost Community argues, urban Catholic schools have been in the social-capital business for a century, to great effect. We must do everything we can to stem their demise.”

“Recent academic research, like the 2014 book Lost Classroom, Lost Community by two professors at the University of Notre Dame, has confirmed that Catholic schools help stabilize their communities. When President Bush asked me to help organize the 2008 White House summit on inner-city faith-based schooling, he characterized the situation as a ‘crisis.’ Less than a decade later, Catholic schools are budding for a renaissance.”

“There is ample research to demonstrate inner-city Catholic schools’ educational excellence, going back to the pioneering Coleman/Greeley studies in the 1970s. Now comes an even more comprehensive claim about the positive impact of these schools: For, according to two law professors at the University of Notre Dame, Margaret F. Brinig and Nicole Stelle Garnett, inner-city Catholic schools are important factors in urban renewal as builders of ‘social capital.’ . . . Inner-city Catholic schools are in deep financial crisis, with strapped dioceses scrambling to find the dollars to subsidize indisputably effective schools that can no longer support themselves by themselves. Brinig and Garnett argue that, given their demonstrably positive impact across society, these schools should be given a fighting chance through mechanisms like tuition tax credits or vouchers, with public funds going to the child to enable students to attend an inner-city Catholic school.”

“It is rare that one encounters a book that is seminal, well written and important, all at the same time. But, Lost Classroom, Lost Community . . . is such a book. It sets forth a new argument for keeping our Catholic schools vibrant, and instantly makes itself a ‘must read’ for every bishop, every school superintendent, event director of a state Catholic conference, every lobbyist for Catholic conferences, as well as anyone, Catholic or not, who cares about bringing relief to the often miserable conditions that confront urban America.”

“This is a sad and important story for an array of reasons. If the Catholic school closure trend does not look like it will abate anytime soon, perhaps policy makers can learn from Lost Classroom and devise policies that will help to better preserve effective classrooms and urban neighborhoods. That is, perhaps Catholic schools’ legacy can at least partially offset the consequences from Catholic school closures in American cities.”

“Brinig and Garnett have contributed substantially to the public appreciation of parish schools not only as alternatives to public schooling, but also to the quality of life in the neighborhoods they serve. The salient question still remains: if Catholic schools are so vital to the future of our urban neighborhoods, why can’t we as a church and a nation work to sustain them?”

“Brinig and Garnett bring a unique perspective to the Catholic school effect literature: that these are not only effective educational institutions but also important community institutions. Their findings bolster arguments about the important societal benefits that Catholic schools provide in educating disadvantaged children and strengthening the communities in which they live.”

Anthony S. Bryk, president of The Carnegie Foundation for the Advancement of Teaching | coauthor of "Catholic Schools and the Common Good"

“As the nation continues to struggle with its promise for quality education, Brinig and Garnett offer a thorough, thoughtful, and critical analysis of another emerging problem: Catholic school closures. This problem is particularly acute for urban America given Catholic schools’ often heroic role in supplying quality, cost-effective educational alternatives in many cities. As well, Catholic schools’ contribution of human and social capital is difficult to overestimate. In this evenhanded examination, the authors helpfully lever qualitative and quantitative methods and adopt an institutional framework to make a compelling case for critical policy problems that should concern students, families, and cities. This book is a must-read for parents, policy makers, and scholars.”

“For generations, Catholic schools have created social capital in dense, urban environments, protecting communities from crime, decay, and decline—even while giving families an educational alternative. Quietly but surely, Brinig and Garnett’s study of the impact of Catholic schools in Chicago makes a strong case for preserving religious-based education in our urban areas. If school vouchers became generally available, they would provide these valuable religious schools with the financial backing necessary to place them on an even playing field with the new, secular charter schools that are regularly occupying vacated Catholic school buildings. Lost Classroom, Lost Community is a solid, scholarly contribution to the school choice conversation.”

“It has been argued for decades that Catholic schools are somewhat unique in their ability to create community and social capital. What is new in Lost Classroom, Lost Community is a clear link between theoretical arguments about this relationship and a policy program intended to preserve Catholic schools that is put into terms a more general audience may understand. While school choice is usually advocated from a markets perspective, Brinig and Garnett argue that school choice should be less geared toward competition (which Catholic schools are, after all, losing) and more geared toward creating social capital. To me, this is the most interesting aspect of their book.”