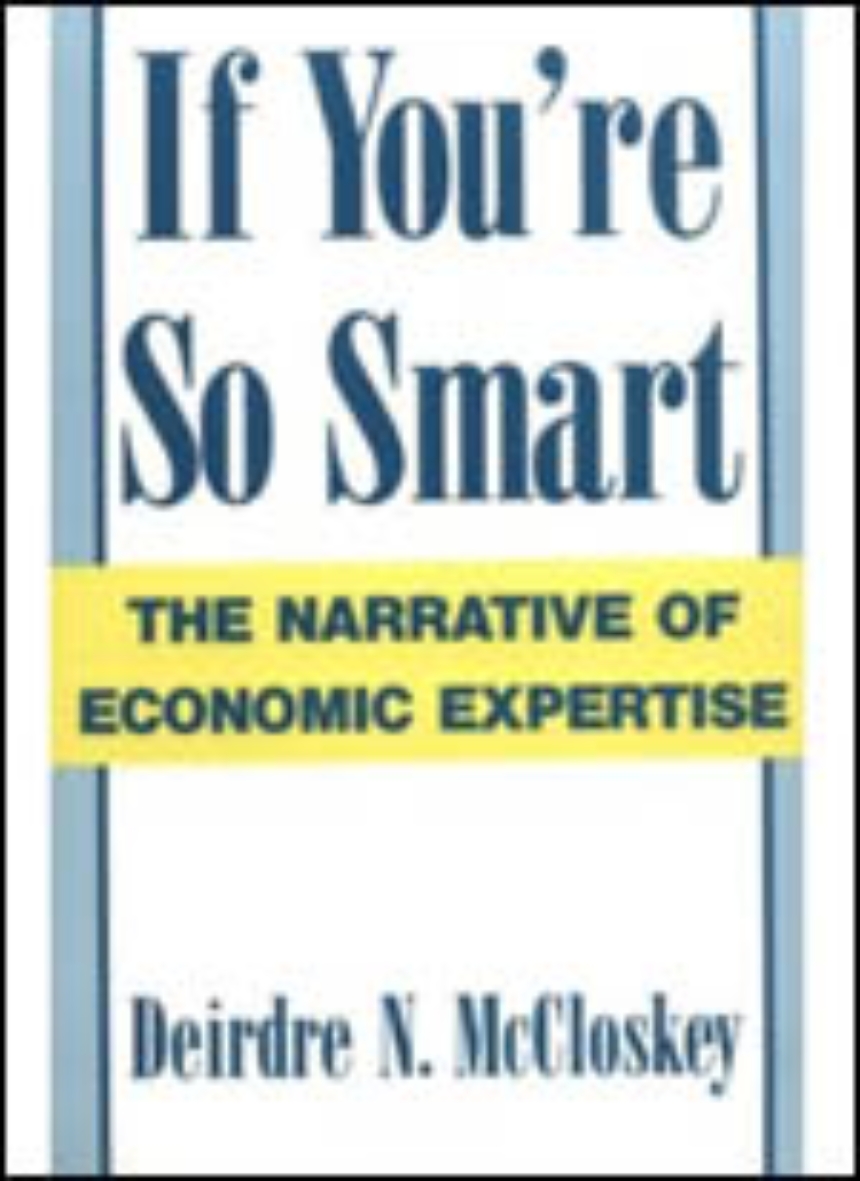 If You’re So Smart

The Narrative of Economic Expertise

If You’re So Smart

The Narrative of Economic Expertise

In this witty, accessible, and revealing book, Deirdre McCloskey demystifies economic theory and practice to show that behind the economists claim to certainty is the ancient art of  storytelling. If You’re So Smart will engage, enlighten, and empower anyone trying to evaluate the experts who stand ready to engineer our lives.

"McCloskey is more interesting on an uninspired day than most of her peers can manage at their very best."—Peter Passell, New York Times

Preface
Introduction
Modernism narrowed the conception that economists had of their science
1. Telling Stories Economically
Economics in fact uses metaphors, which is to say, models. But it also uses stories—stylized facts—about the weight of taxes or the rise of industry
2. Plot and Genre in Economics
The analogy of economics with the writing of stories can be pushed far, from genre to the implied author.
3. The Politics of Stories in Historical Economics
If economists are storytellers they are historians. The stories of economics show in historical economics, such as that surrounding England’s decline from Number One.
4. Economic Rhetoric in Aid of the Story Line
Every element of rhetoric supports the expert’s story.
5. The Scholar’s Story
A great historical economist told his story more self-consciously than most economists. One can unveil a rhetoric without invariably finding badness.
6. Metaphors Against the Story: Chaos and Counterfactuals
Metaphors and stories can get in each other’s way, as in the hypothesis contrary to fact and in the telling of stories about explosive times.
7. The Poetics and Economics of Magic
The story uncriticized by a metaphor or the metaphor uncriticized by a story is magic, against which economics warns.
8. The American Question: If You’re So Smart Why Ain’t You Rich?
Get-rich-quick schemes, for example, with their reversal of status, are stories. But they are defective, magical. The mere critic cannot advise so well.
9. The Limits of Criticism
Such criticism of criticism applies beyond economics. Economists and other social experts can tell wise stories of the past, but cannot profitably predict.
10. Keeping the Company of Economists
Storytelling by an economic expert affects his character, and then his economics.
11. The Common Weal and Economic Stories
The stories told well or ill govern policy. The story of American economic "failure" (a replay of the British story) is a dangerous example. Humans need stories, but they need them to be watched. A humanistic and interpretive economics, which keeps the mathematics but is aware of its stories, can do the watching.
Works Cited
Index