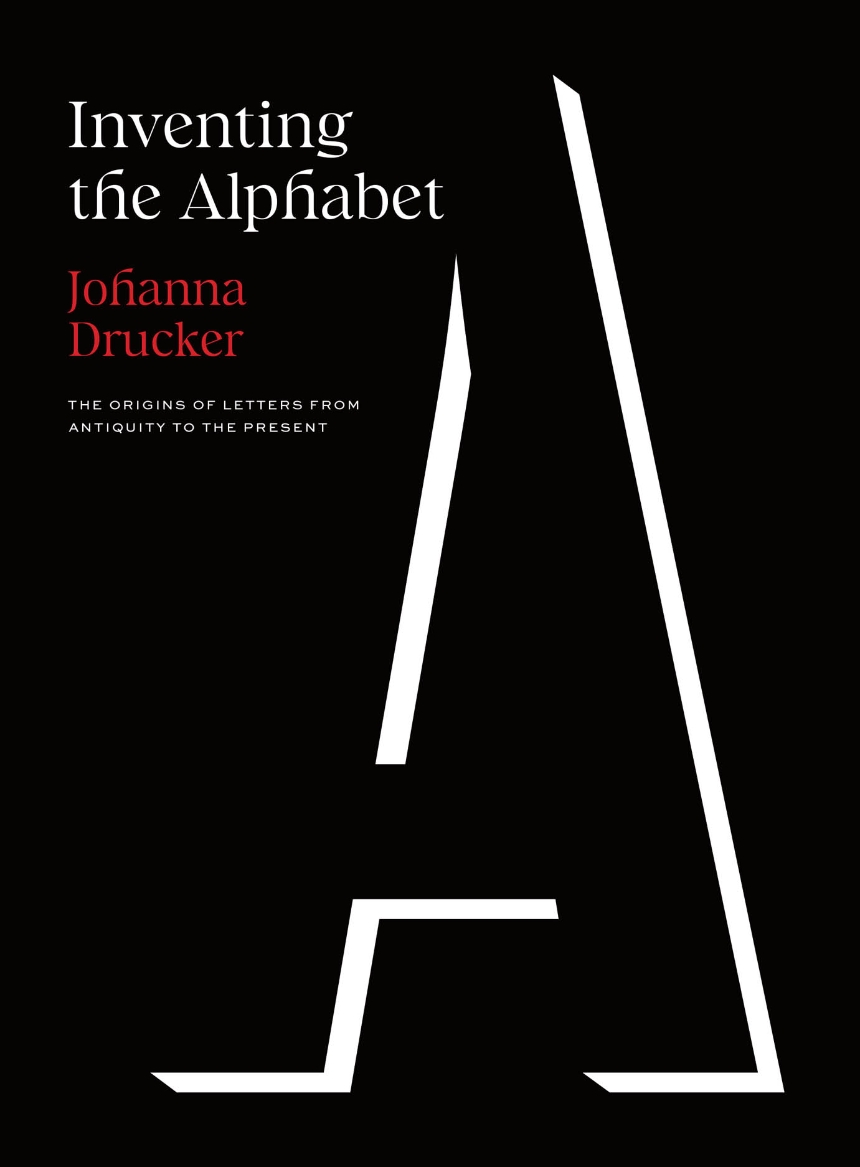 The Origins of Letters from Antiquity to the Present

The Origins of Letters from Antiquity to the Present

Inventing the Alphabet provides the first account of two-and-a-half millennia of scholarship on the alphabet. Drawing on decades of research, Johanna Drucker dives into sometimes obscure and esoteric references, dispelling myths and identifying a pantheon of little-known scholars who contributed to our modern understandings of the alphabet, one of the most important inventions in human history.

Beginning with Biblical tales and accounts from antiquity, Drucker traces the transmission of ancient Greek thinking about the alphabet’s origin and debates about how Moses learned to read. The book moves through the centuries, finishing with contemporary concepts of the letters in alpha-numeric code used for global communication systems. Along the way, we learn about magical and angelic alphabets, antique inscriptions on coins and artifacts, and the comparative tables of scripts that continue through the development of modern fields of archaeology and paleography.

This is the first book to chronicle the story of the intellectual history through which the alphabet has been “invented” as an object of scholarship.

“With Inventing the Alphabet, Drucker—scholar, interpreter, and designer of printed words and letters—sheds light on that which has brought humankind out of darkness."

Introduction
1. When Did the Alphabet Become “Greek”?
2. Divine Gifts: Original Letters, Moses, and the Tablets at Mount Sinai
3. Medieval Copyists: Magical Letters, Mythic Scripts, and Exotic Alphabets
4. The Confusion of Tongues and Compendia of Scripts
5. Antiquity Explained: The Origin and Progress of Letters
6. The Rhetoric of Tables and the Harmony of Alphabets
7. Modern Archaeology: Putting the Evidence of the Alphabet in Place
8. Reading the Early Alphabet: Epigraphy and Paleography
9. Alphabet Effects and the Politics of Script
Coda: Alphabetic Agency and Global Hegemony
Notes
Selected Bibliography
Index
Excerpt

Few human systems have as long a history of continuous use as the alphabet. Few play such a major role in the production or transmission of knowledge and culture. With the exception of character-based writing (Chinese, Korean, and Japanese), the alphabet in its many variations is the chief writing system in use today, and yet few of its users pause to consider its origins or history. When and where did the letters come into being? How did they spread and change in the course of their near-global expansion? How can letterforms invented nearly four millennia ago undergird global communication in the present? These are topics that hardly make it into academic discussions, let alone ordinary conversation.

However, this study is not an addition to the number of authoritative books on alphabet history. Classics such as Isaac Taylor’s The Alphabet (1883) and David Diringer’s The Alphabet: A Key to the History of Mankind (1947) have been joined by many contemporary works. Instead, this work is a contribution to the intellectual history of this topic. Who knew what when about the alphabet? And how did the way they knew it—through texts, images, inscriptions, or artifacts—affect their conception of the identity and origin of alphabetic writing? As a historiography, this account traces the ways knowledge and belief shaped the understanding of alphabetic writing.

Many basic misconceptions exist in this field. Ask the average literate person about the alphabet and often the response is, “Which alphabet? Our alphabet? You mean the Greek alphabet?” In fact, the alphabet was invented only once, by Semitic speakers in the ancient Near East. Alphabetic scripts all derive from the same root; as they spread, their letterforms were modified. Even scripts as visually distinct as Arabic, Cyrillic, Latin, Greek, Hebrew, Devanagari, Tamil, and Gheez have a common source. This root emerged nearly four thousand years ago in a cultural exchange between Egyptians, Canaanites, and other speakers of the Afro-Asiatic language group of which Semitic languages form a branch. The factual details of alphabetic innovation are increasingly well documented, supported by knowledge of ancient languages and the study of inscriptions. Physical evidence of the early alphabet has been carefully mapped onto the geography of archaeological sites that track transmission throughout the Mediterranean in the second millennium BCE.

Writing, a broader category than alphabetic script, was invented in several forms in human history and includes hieroglyphics in Egypt, cuneiform in Mesopotamia, various linear scripts in Crete, the glyphs and characters of New World systems, the Indus valley, and Easter Island. Of these, only character-based writing survives today. This type of writing was an independent invention in ancient China, whose earliest known inscriptions are dated to about 1600 BCE. Writing may have sprung into being and been lost at other times. But with the exception of Egyptian and Mesopotamian writing, these systems are completely separate from the history of the alphabet. Notation systems for counting with tallies or marks, or tracking the motions of the stars and planets, have even longer histories than writing. Other systems of record keeping—wampum, quipu, bark painting, calendars, and abstract marks—also have independent histories. But no other system of writing has been so persistent and so pervasive as the alphabet—or, arguably, so potent in its global effects.

The intellectual imagination required to create a relationship between spoken language and written notation is one of the most profound achievements of humankind. Alphabetic writing differs from pictographs, tokens, or glyphs, for instance, and even early hieroglyphics, because those signs symbolized things, quantities, or concepts. The predominant early scripts in Egypt were hieroglyphics, hieratic (a cursive form of Egyptian writing), and in Mesopotamia, cuneiform. As later versions of these scripts began to correlate with sound, notation systems in the ancient Near East became simpler. A reduced set of non-pictorial written signs helped lay the foundation for the emergence of the alphabet. Significant analytic skill was required to understand that speech had elemental sound units—whether understood as syllables, phonemes, consonants, or vowels—that could be reduced to a manageable number and then represented by a stable set of signs. The way this occurred, by what process or motivation, is impossible to recover in full detail, but the early alphabet was the expression by Semitic speakers of the analysis of the sounds of their language. This accomplishment is what permitted the alphabet to develop, spread, and be adopted by speakers of many different languages who used its signs for their own speech.

Contemporary methods of scholarly work have established an empirical foundation for the basic account of alphabet history. But until the end of the nineteenth century, the physical evidence on which alphabet history could be traced was scant. Only a handful of inscriptions from the earliest periods of formation was available. In the twentieth century, this situation changed dramatically. Now it is possible to show when and by what steps the earliest Proto-Sinaitic and Proto-Canaanite scripts of the second millennium BCE led to consolidation of the Phoenician script around 1000 BCE. Debates about the specific details of this process of formation are still ongoing. But the movement of the alphabet southward into Arabia and North Africa, northwest into Asia Minor, west through the islands of the Aegean and the Italian and Iberian peninsulas, east into the mountains of the Caucasus, and across the Indus valley into India and Southeast Asia is well mapped…

Despite the modifications the alphabet has undergone, the visual forms of the original script are still discernible in the shapes of many of the letters. The schematic forms of early alphabetic signs remain. With a persistent echo and on a daily basis, these forms connect us to our past across a span of nearly four thousand years. Even in those parts of the world that use character-based scripts, the alphabet plays a role in internet infrastructure and design. Alphanumeric notation is the basis of Unicode, the international standard controlling text display on our digital screens...

Alphabet historiography offers a fascinating case study of the history of Western thought. It also provides insights into the way the materiality of knowledge production and transmission engenders intellectual conceptions. For instance, textual descriptions do not provide examples of the visual forms of alphabetic characters they describe. Physical artifacts and ancient inscriptions may not be immediately legible. Establishing the lineage of objects in relation to the historical past requires multiple archaeological methods. The properties of evidence shape the historical arguments.

Though the history of the alphabet can now be documented with some degree of accuracy, the historiography of the alphabet remains largely unknown. In many other fields, the canonical texts would be identified and studied, even if they are eclipsed. A student of Western philosophy certainly knows the works of Plato and Aristotle, Descartes, and Kant and other major references into the present. Similar lists could be compiled for astronomy, physics, history, and poetics. But who is familiar with Hrabanus Maurus, Johannes Trithemius, Teseo Ambrogio, Angelo Rocca, Thomas Astle, Edmund Fry, Charles Forster, Isaac Taylor, Frank Moore Cross, and Joseph Naveh—or has any idea of their writings on the alphabet? The authors just mentioned were crucial. Each copied and cited the works of others until the trends or beliefs in them were overshadowed by others, or put aside as obsolete. Some are still vital to debate. In this project, those intellectual traditions and frameworks of belief are identified and described explicitly—they are the foreground rather than the background of the story.