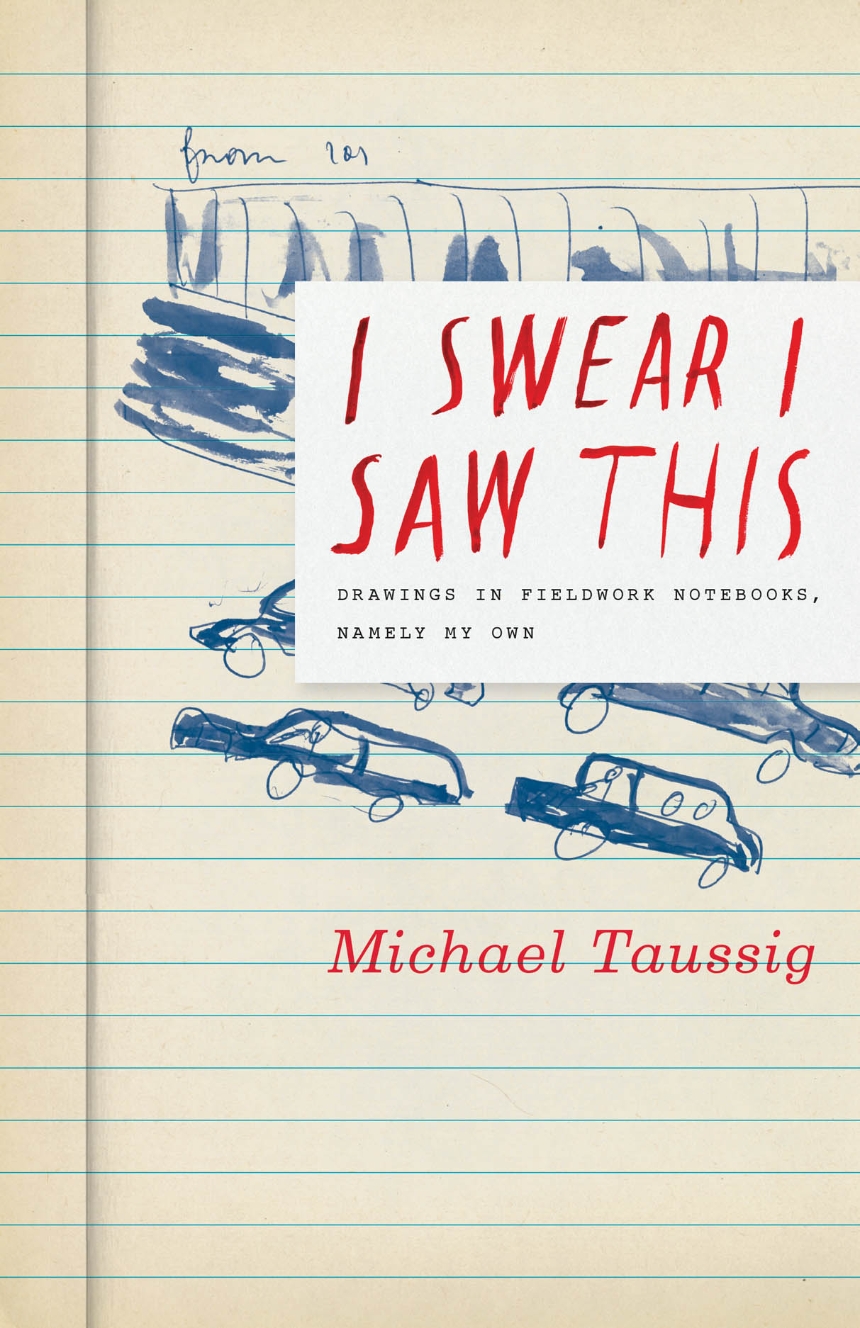 I Swear I Saw This

Drawings in Fieldwork Notebooks, Namely My Own

I Swear I Saw This

Drawings in Fieldwork Notebooks, Namely My Own

I Swear I Saw This records visionary anthropologist Michael Taussig’s reflections on the fieldwork notebooks he kept through forty years of travels in Colombia. Taking as a starting point a drawing he made in Medellin in 2006—as well as its caption, “I swear I saw this”—Taussig considers the fieldwork notebook as a type of modernist literature and the place where writers and other creators first work out the imaginative logic of discovery.
Notebooks mix the raw material of observation with reverie, juxtaposed, in Taussig’s case, with drawings, watercolors, and newspaper cuttings, which blend the inner and outer worlds in a fashion reminiscent of Brion Gysin and William Burroughs’s surreal cut-up technique. Focusing on the small details and observations that are lost when writers convert their notes into finished pieces, Taussig calls for new ways of seeing and using the notebook as form. Memory emerges as a central motif in I Swear I Saw This as he explores his penchant to inscribe new recollections in the margins or directly over the original entries days or weeks after an event. This palimpsest of afterthoughts leads to ruminations on Freud’s analysis of dreams, Proust’s thoughts on the involuntary workings of memory, and Benjamin’s theories of history—fieldwork, Taussig writes, provokes childhood memories with startling ease.
I Swear I Saw This exhibits Taussig’s characteristic verve and intellectual audacity, here combined with a revelatory sense of intimacy. He writes, “drawing is thus a depicting, a hauling, an unraveling, and being impelled toward something or somebody.” Readers will exult in joining Taussig once again as he follows the threads of a tangled skein of inspired associations.

“That Taussig chooses to write this book as a series of story-like musings rather than a strict theoretical argument makes for fascinating reading....He talks about drug smuggling and murderous police in Colombia, and offers anecdotes from the history of anthropology, yagé-induced hallucinations, and more. We see how for Taussig, stories prompt questions and questions in turn prompt more stories.”

“There are two types of anthropologists: One models himself on the scientist, treating the world as his laboratory, people as his raw data ….The other kind of anthropologist is more like a religious initiate, participating fully in the culture in which he is placed and intimating that he is then the possessor of some secret knowledge….It is this latter tradition of which Michael Taussig, an eminent professor at Columbia University, is one of the greatest exponents. The New York Times has called his work ‘gonzo anthropology.’ He has drunk hallucinatory yagé on the sandy banks of the Putumayo River. He’s cured the sick with the aid of spirits. He’s escaped from guerrillas in a dugout canoe at dawn. Above all, he is interested in individual stories and experiences, unique tales that cannot be reduced to rational explanation or bland report….At the center of Taussig’s method is the anthropologist’s desire to bear witness to what he cannot understand. Meditating on his sketch and notes, Taussig imbues the event with the magical aura of a collector’s gem. Was it chance or fate that brought them together in that tunnel? And was it chance or fate that transfigured the relatively common scene into something haunting and extraordinary?”

“This work is both a highly original contribution to the voluminous literature on ethnographic fieldwork and an interesting addition to the distinctive oeuvre of Michael Taussig, one of the most accomplished writers that anthropology has produced….What follows is a mixture of the visual and the visionary. For anthropologists, field notes have long been the private archive of research, but more so, they have been a kind of licensed literary form, with which this short compelling work experiments. Summing Up: Essential.”