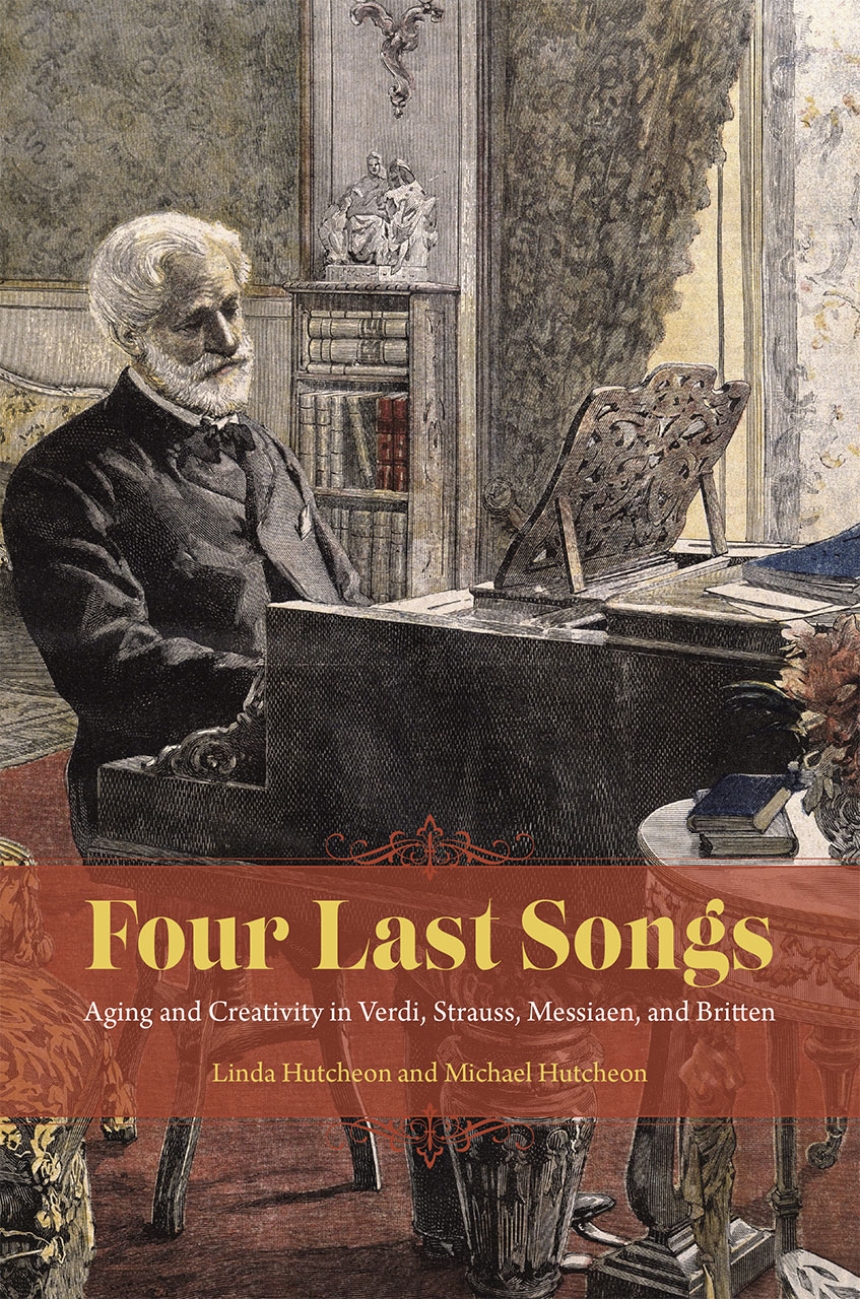 Aging and Creativity in Verdi, Strauss, Messiaen, and Britten

Aging and Creativity in Verdi, Strauss, Messiaen, and Britten

Aging and creativity can seem a particularly fraught relationship for artists, who often face age-related difficulties as their audience’s expectations are at a peak. In Four Last Songs, Linda and Michael Hutcheon explore this issue via the late works of some of the world’s greatest composers.

Giuseppe Verdi (1813–1901), Richard Strauss (1864–1949), Olivier Messiaen (1908–92), and Benjamin Britten (1913–76) all wrote operas late in life, pieces that reveal unique responses to the challenges of growing older. Verdi’s Falstaff, his only comedic success, combated Richard Wagner’s influence by introducing young Italian composers to a new model of national music. Strauss, on the other hand, struggling with personal and political problems in Nazi Germany, composed the self-reflexive Capriccio, a “life review” of opera and his own legacy. Though it exhausted him physically and emotionally, Messiaen at the age of seventy-five finished his only opera, Saint François d’Assise, which marked the pinnacle of his career. Britten, meanwhile, suffering from heart problems, refused surgery until he had completed his masterpiece, Death in Venice. For all four composers, age, far from sapping their creative power, provided impetus for some of their best accomplishments.

With its deft treatment of these composers’ final years and works, Four Last Songs provides a valuable look at the challenges—and opportunities—that present themselves as artists grow older.

“Well written, and, best of all, will make the reader want to hear the music discussed, or hear it again. . . . Recommended.”

“An extremely inspiring study of a heroic quartet.”

“The fascinating profiles of each of these composers in Four Last Songs, makes it clear that their successful final stages were due to far more than abundant talent and prior success, but to the heroic levels of discipline and commitment to their work honed over a lifetime of productivity. . . . Four Last Songs is full of material of interest to opera lovers as well as students of human nature and though it has special pertinence to readers embarking on the last great era of their lives, it is never too soon to reflect on how to manage life now in order to savour it later.”

“Four Last Songs takes its readers on a vivid musicological journey across the rhythms of tradition and discords of modernity to arrive at the late careers of Verdi, Strauss, Messiaen, and Britten, whose operas tell big stories about nation and identity, finitude and transcendence. Bravo to the Hutcheons for bringing their historical discoveries and brilliant sense of the unexplored to inspire age studies today and into the future.”

“This is an excellent book with implications and resonances that reach far beyond the study of the four composers. It displays a tremendous range of knowledge across a spectrum of disciplines: musicology, critical theory, humanistic gerontology. The Hutcheons are pioneers in creating such a synthesis. Timely in its arguments, Four Last Songs will appeal widely and make a powerful impact.”

“Limits to creativity are rarely imposed by nature alone; rather it is social constraints that have often weighed heavily on those pursuing significant creative goals late in life. This important book beautifully validates what those who continue to pursue professional and personal projects in their late years already know; but for others, who associate aging with ebbing energy and creative fatigue, this book is, and should be, a revelation.”

“As a practicing geriatrician, I was inspired by these accounts of creativity in old age. As an opera lover (Verdi’s Falstaff is one of my particular favorites), I enjoyed the stories about these remarkable composers. I would highly recommend this elegantly written book for any reader interested in opera, or creativity, or aging.”