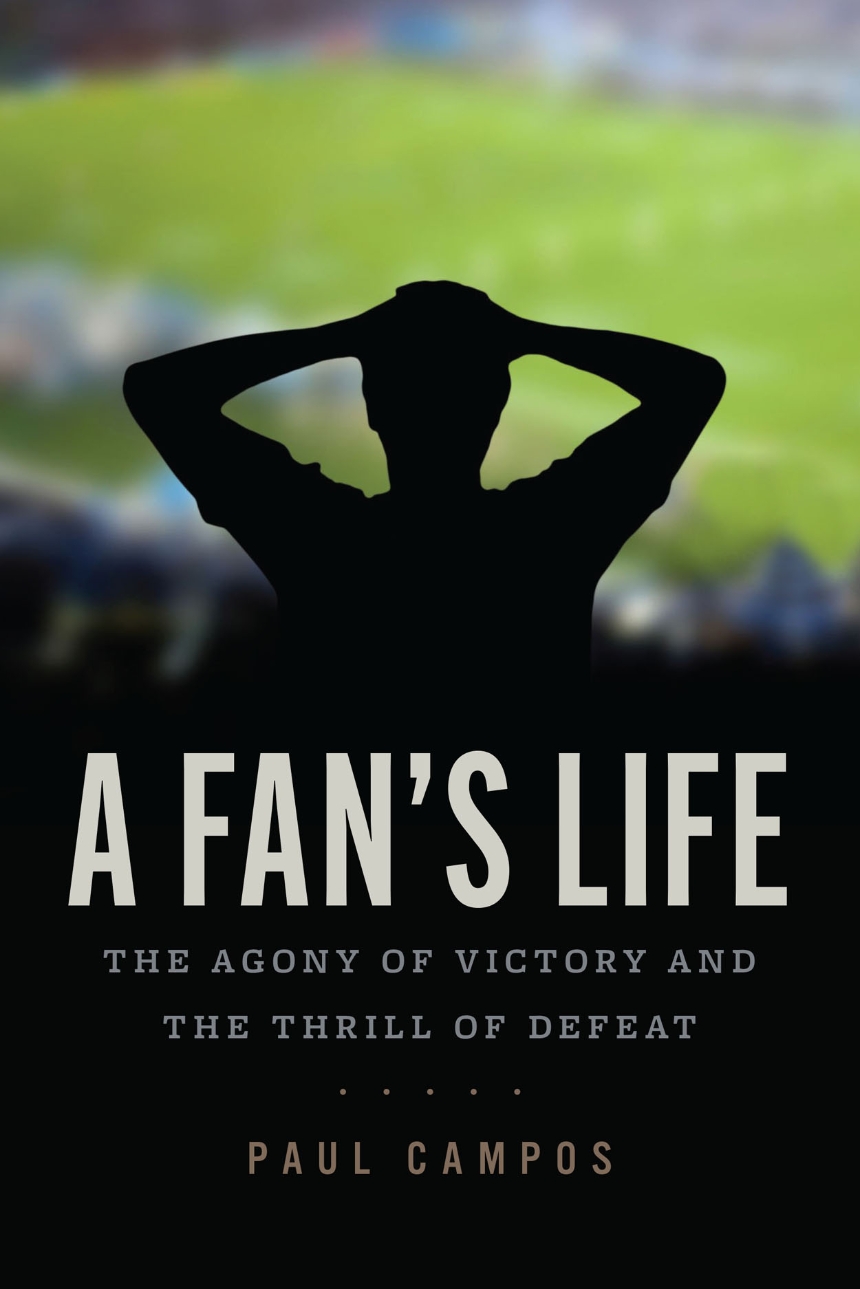 The Agony of Victory and the Thrill of Defeat

The Agony of Victory and the Thrill of Defeat

A lifelong sports fanatic plumbs the depths of the fan mindset, tracking the mania from the gridiron to the national political stage and beyond.

The Pass. The Curse. The Double Doink. A sports fan’s life is not just defined by intense moments on a field, it’s scarred by them. For a real fan, winning isn’t everything—losing is. The true fans, it’s said, are those who have suffered the most, enduring lives defined by irrational obsession, fervid hopes, and equally gut-wrenching misery. And as Paul Campos shows, those deep feelings are windows not just onto an individual fan’s psychology but onto some of our shared concepts of community, identity, and belonging—not all of which are admirable. In A Fan’s Life, he seeks not to exalt a particular team but to explore fandom’s thorniest depths, excavating the deeper meanings of the fan’s inherently unhappy life.

A Fan’s Life dives deep into the experience of being an ardent fan in a world defined more and more by the rhetoric of “winners” and “losers.” In a series of tightly argued chapters that suture together memoir and social critique, Campos chronicles his lifelong passion for University of Michigan football while meditating on fandom in the wake of the unprecedented year of 2020—when, for a time, a global pandemic took away professional and collegiate sports entirely. Fandom isn’t just leisure, he shows; it’s part of who we are, and part of even our politics, which in the age of Donald Trump have become increasingly tribal and bloody. Campos points toward where we might be heading, as our various partisan affiliations—fandoms with a grimly national significance—become all the more intense and bitterly self-defining. As he shows, we’re all fans of something, and making sense of fandom itself might offer a way to wrap our heads around our increasingly divided reality, on and off the field.

“A terrific account of the experience of the engaged sports fan. Campos is deeply and broadly informed about sports, of course, but he also thoughtfully and authoritatively weaves in politics, music, economics, criminal justice, and race relations. He consistently and effectively reminds readers of how changes in media and communication have inflected the contemporary fan experience, without ever letting us forget the personal story at this book’s core.”

David Henkin, author of The Week: A History of the Unnatural Rhythms That Made Us Who We Are

Prologue: Five Days in March
Preface: They Didn’t Listen to Jesus Either
Fandom Is Folly
The Factory of Sadness
Lose Yourself
Me and Mrs. Jones
Ventura Highway
The Politics of Nostalgia
Beautiful Losers
Living Your Gimmick
Warrior-Poets
A Song for You
Bending the Knee
The Merit Myth
Varsity Blues
After the Gold Rush
Onward Christian Soldiers
Being There
Celebration Day
OK Boomer
A Flag Is Down
Bacon and the Patriarchy
Upon Further Review, Every Man Kills the Thing He Loves
A Meaningless Game
The End of the World as We Know It
Hotel California
The Flight Tracker
An Acute Limited Excellence
Duende
A Season without Sports
Tangled Up in Blue
The Circle Game
Acknowledgments
Excerpt

The first faint shiver of this book came to me on New Year’s Day 1997. I was surfing the Internet with the vague idea of finding someone to talk with about the University of Michigan’s football team, which had just lost its bowl game to Alabama in a particularly absurd and excruciating manner. The Wolverines had been driving deep in Alabama territory in the fourth quarter. They—we—had the lead and were on the verge of scoring an apparent game-clinching touchdown when quarterback Brian Griese tried to get rid of the ball as he was being hit by a blitzing defensive back. The resulting pass looked like something a small child would throw in a backyard game of catch; the ball fluttered forward for about 5 yards before landing in the arms of an Alabama linebacker, who immediately raced 88 yards downfield for the game-winning score.

I had just discovered the cyberworld, so I didn’t really know where to look for such a conversation. I don’t recall what search engine I used—Google didn’t exist yet—but I stumbled onto a message board dedicated to discussing University of Michigan sports, mainly football.

The very first post I read was an agonized jeremiad from “Brent” that went into great detail about how this game illustrated, as he had been pointing out at length for two seasons now, that the hiring of Lloyd Carr as Michigan’s head coach had been an unmitigated disaster. Indeed, only the most deluded of optimists could possibly still believe that things could get appreciably better as long as Carr remained in that position. On the other hand, Brent noted, the rejection of his prophecy by the board’s “sunshine blowers” was only to be expected. After all, the Gospels recorded how, in biblical times, “they didn’t listen to Jesus either,” Brent reminded them—or rather, us—as I read on in rapt fascination. (It would be uncharitable to point out that one year later to the day Michigan would win the national championship.)

“Now in no way am I comparing myself to Jesus Christ,” Brent hastened to add. Somehow this caveat was lost on the rest of the board, which, already roiled in the kind of bitter arguments and recriminations that I soon learned were the inevitable products of any Michigan loss, unleashed a furious barrage of scorn and sarcasm against the self-styled prophet.

Here, I realized, are my people. And, nearly a quarter century later, I’m still there.

This book is, among other things, a memoir of being a deeply engaged sports fan in the age of the Internet. I have been a sports fan for almost exactly fifty years—I discovered team sports at the age of ten, after being largely oblivious to them until that point—and I have spent almost exactly half of that time following sports on the Internet. And fandom is ultimately about one’s memories of being a fan, which is to say that nostalgia is its basic fuel.

Yet at this particular moment in American life, indulging in nostalgia has become fraught in all sorts of ways. This book explores how the psychological experience of fandom is related to the longing for an idealized past fueling the wave of political reaction that has swept over the country in recent years.

The Internet has changed—and come to dominate—life in countless ways, but it is especially striking how it has created a complex world of communities: in particular communities that allow people with an especially passionate interest in a subject to find one another, to share and often intensify that passion to the point of obsession and fanaticism—the concept from which we get “fan.” This should be a source of happiness—especially if you believe the economic premise that consumers rationally try to maximize their enjoyment of different kinds of leisure or entertainment.

Yet being a fan of anything or anyone, especially in this mediated context, tends to make us deeply unhappy. Fandom, fundamentally, isn’t about happiness; indeed, it is about unhappiness—specifically, the kind of communal unhappiness of people who choose to be unhappy together rather than to suffer alone.

People who hate sports in general and sports fandom in particular sometimes mock such passions with the word “sportsball,” signaling disdain for pointless and irrational allegiances to various teams. Yet there’s an approximately 83 percent chance, I’d wager, that anyone who uses the word “sportsball” has gotten into furious arguments about whether Han Solo shot first in the bar scene in Star Wars and/or has actually written fan fiction of some kind—which is to say, fandom isn’t limited to sports. Fandom is ultimately egalitarian: for instance, someone who reads the works of Michel Foucault and someone who pays $9.99 a month for access to the World Wrestling Entertainment Network can both be fanatically devoted to worshipping or despising the Dallas Cowboys. They can sometimes even be the same person.

The Internet, of course, fuels obsession. And obsession, too, ranges far beyond sports. In cyberspace, the mental world of the deeply engaged sports fan—captured concisely by novelist and fanatical Arsenal football club supporter Nick Hornby thus: “For alarmingly large chunks of an average day, I am a moron”—can easily migrate into many other realms, especially politics. The essence of fandom, in fact, is partisanship, and tribalism and schadenfreude are the characteristic mental states of our time; both make otherwise intelligent people stupid and stupid people even stupider.

For a football team to elicit fandom is usually fairly benign; for a political movement or leader to do so is definitely not. Yet in American culture, the distinction between sports and politics is being blurred increasingly, by people seeking to profit from that blurring. The blurring has a pronounced and not arbitrary ideological tilt. Being drunk on ethno-nationalism, it turns out, is very similar to being drunk on rooting for your favorite team, or being drunk, period. In 2012 researchers went into a bar and asked questions of eighty-five drinkers. As people got drunker, their answers became more politically conservative. The authors’ conclusion? “Because alcohol limits cognitive capacity and leaves automatic thinking largely intact, these data are consistent with our claim that low-effort thinking promotes political conservatism.”

Ethno-nationalism, in particular, reduces what social scientists refer to as “cognitive load” by transferring the crude psychological allegiances sports fans have for their teams to a racialized vision of the nation-state. Deeply engaged fandom by its nature also limits cognitive capacity and leaves automatic thinking largely intact, which is why demagogues do everything possible to make their political rallies indistinguishable from a pep rally before the Big Game. (Flaubert: “To be stupid, selfish, and have good health are three requirements for happiness, though if stupidity is lacking, all is lost.”)

Yet deeply engaged fandom can be a good thing, too. When it stays in the world of sports, it can promote the kind of community that is otherwise lost in our increasingly atomized society. More than twenty years ago, in his book Bowling Alone, the sociologist Robert Putnam used the decline of bowling leagues as both an example of and a metaphor for the decline of traditional social networks. Things haven’t gotten better since then. But the world of sports message boards can be a kind of antidote to surfing the Internet alone. The friendships people develop there are very real—especially, perhaps, for middle-aged and older men, who often find themselves isolated in a society where so many institutions (such as fraternal lodges, labor unions, and religious organizations) that once created and sustained communities have deteriorated or disappeared. Sports in general, and fandom in particular, can serve as windows not only into the microsocieties they create, but into society as a whole—into the broader worlds of politics, economics, and culture.