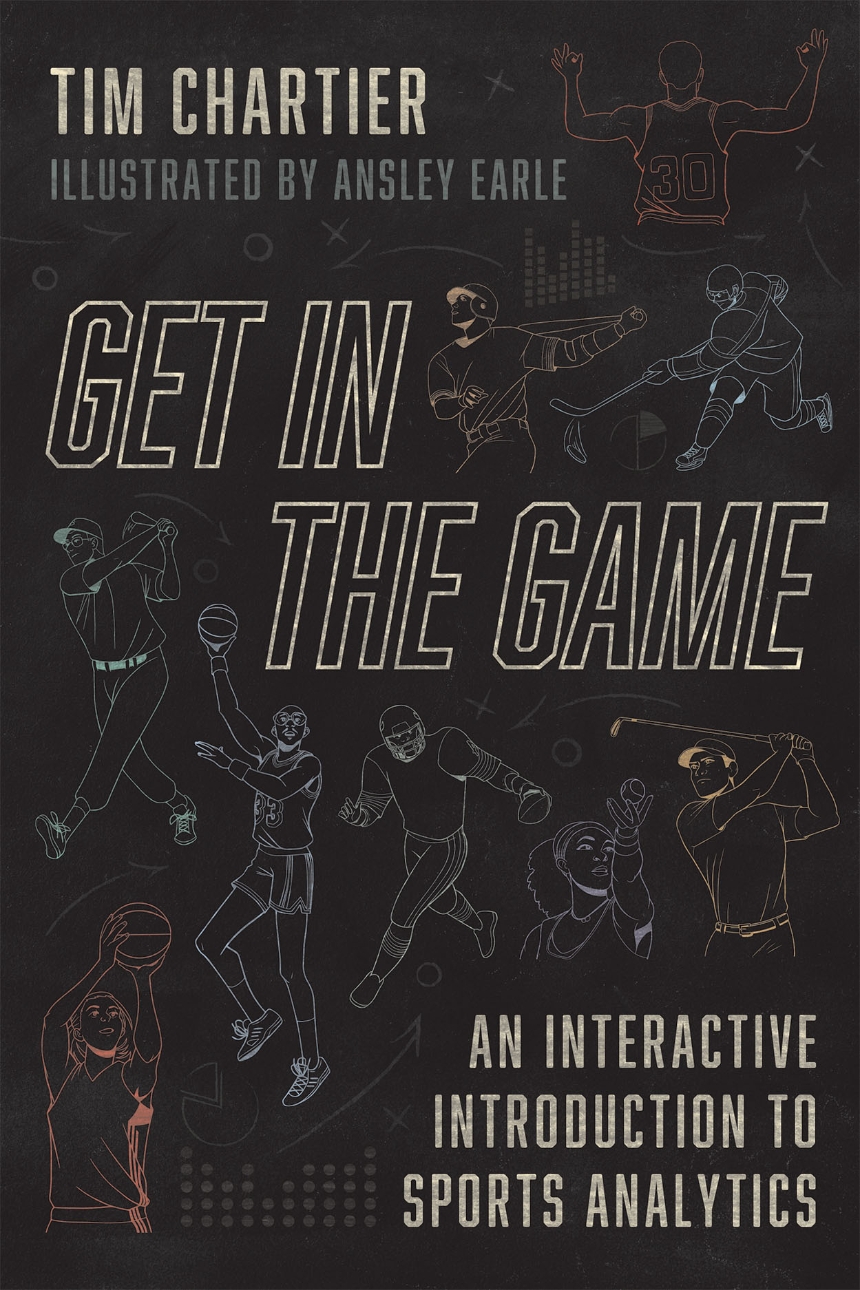 Get in the Game

An Interactive Introduction to Sports Analytics

Get in the Game

An Interactive Introduction to Sports Analytics

Illustrated by Ansley Earle
An award-winning math popularizer, who has advised the US Olympic Committee, NFL, and NBA, offers sports fans a new way to understand truly improbable feats in their favorite games.

In 2013, NBA point guard Steph Curry wowed crowds when he sunk 11 out of 13 three-pointers for a game total of 54 points—only seven other players, including Michael Jordan and Kobe Bryant, had scored more in a game at Madison Square Garden. Four years later, the University of Connecticut women’s basketball team won its hundredth straight game, defeating South Carolina 66–55. And in 2010, one forecaster—an octopus named Paul—correctly predicted the outcome of all of Germany’s matches in the FIFA World Cup. These are surprising events—but are they truly improbable?

In Get in the Game, mathematician and sports analytics expert Tim Chartier helps us answer that question—condensing complex mathematics down to coin tosses and dice throws to give readers both an introduction to statistics and a new way to enjoy sporting events. With these accessible tools, Chartier leads us through modeling experiments that develop our intuitive sense of the improbable. For example, to see how likely you are to beat Curry’s three-pointer feat, consider his 45.3 percent three-point shooting average in 2012–13. Take a coin and assume heads is making the shot (slightly better than Curry at a fifty percent chance). Can you imagine getting heads eleven out of thirteen times? With engaging exercises and fun, comic book–style illustrations by Ansley Earle, Chartier’s book encourages all readers—including those who have never encountered formal statistics or data simulations, or even heard of sports analytics, but who enjoy watching sports—to get in the game.

“Get in the Game is a playful and welcoming introduction to the interplay between sports and math. Assuming no math and using only a coin and a die, Chartier artfully illustrates why sports analytics matter through the simplest of questions: how do we measure greatness? This is a must-read for anyone curious about the analytical side of sport.”

John Urschel, former NFL offensive lineman, Institute for Advanced Study, and coauthor of "Mind and Matter: A Life in Math and Football"

“I’ve always wished I could keep a miniature Tim Chartier on my shoulder while I’m watching sports: a brilliant, enthusiastic, friendly expert eager to share his insights about the games. With this book, you’ve got the next best thing.”

“A fun, important book that will draw a lot of sports fans into analytics and mathematics. Lively and informative.”

Roland B. Minton, author of "Sports Math: An Introductory Course in the Mathematics of Sports Science and Sports Analytics"

“Fun and full of puzzles and brainteasers in a mashup of mathematics. . . . Magic.”

You’ve seen it, but not every day. You’re watching a sporting event and the seemingly impossible happens— a diving catch, a half-court shot, a lunge to the finish line. And the crowd erupts. It’s as if we are cheering humanity’s ability to overcome— in the last moment, with the last attempt, against incredible odds.

The memorable event may be a topic of discussion with friends or on social media for a day or a season. But most such highlights fade from memory before long, overshadowed by the next memorable accomplishment. Only occasionally does the unbelievable become the unforgettable. When something remarkable occurs, can we distinguish between the momentarily memorable and the truly historic? The historic is not likely to happen again for a long time, if ever.

The unforgettable is often improbable. So understanding the probability of a surprising event is a clue to its historic significance. How can we compute those odds? And can we do so quickly? Is it possible to see a remarkable accomplishment and by the end of a commercial break know that we likely saw an unforgettably improbable moment?

In this book, we’ll explore how to estimate the probability of events as a way to get in the game with sports analytics. We’ll focus on what counts as historic, but you can apply the tools we’ll use to more everyday questions: Who might win tonight’s game? Can last week’s star player continue at their current level of play? Who might be ready to slay a giant?
That could send you down a rabbit hole. A lot of math, statistics, and computer science topics are relevant to such analysis. One could binge online videos, read hundreds of articles, or learn the nuances of complex and precise analytics tools. But looser estimates can take us a long way toward evaluating the improbable. Here we’ll find insights in flipping a coin or rolling a die. We’ll learn what are often called “back of the envelope” computations, quick calculations to get a sense of a quantity, if not necessarily an exact value.

So grab a pencil and paper and your phone or a computer— you’ll want the calculator for some quick arithmetic, and you’ll sometimes need to download data. That, plus curiosity, is all you’ll need.

Let’s start by looking back a hundred years to the 1920 Major League Baseball season. Babe Ruth was synonymous with home runs. Grabbing stats from baseball-reference.com, we see that in 1920 Ruth hit 54 home runs. The league average that year for home runs by a team was 39. In other words, Ruth hit 54/39, or about 1.4 times more homers than the average MLB team. Now jump ahead to 2019, when the league average for home runs by a team was 226. Repeating Ruth’s feat, hitting 1.4 times the team average, would have meant hitting 313 home runs in the 2019 season— almost two home runs per game, 4.5 times the best rate ever.

Suppose you notice that Babe Ruth was a leftie. So you check the 2020 Yankees roster and find that about 21% of those players threw leftie. That seems higher than the general population. But it’s just one statistic for one team in one season. To get a larger sample size, you could download data from SeanLahman.com, which has stats for more than twenty thousand MLB players, including whether they threw left- or right- handed.

A quick spreadsheet calculation reveals that between 1871 and 2019 about 20% of players threw left- handed, which is close to our 2020 Yankees percentage. Are a fifth of your friends left- handed? It’s unlikely. According to the Washington Post, about 10% of the people in the world are lefties.

So far we’ve used a calculator to compare Babe Ruth’s 1920 home run production with that of the average team, and a spreadsheet to tally the MLB’s historical percentage of lefties, which we then compared with that of the general population. Now we’ll look at another enduring name in sports, NFL wide receiver Jerry Rice, and gain insight from graphing.
Graphs often make outliers obvious. When we plot the number of career receptions for the top ten players in this category on a horizontal axis (the convention in this book), look how much longer the horizontal bar is for Jerry Rice than for the others. This difference visually underscores Rice’s status as an outlier even among Hall of Fame wide receivers.

That’s a remarkably unforgettable career stat. There are also remarkably unforgettable moments in single games. In the 2015 FIFA Women’s World Cup final, the USA beat Japan 5– 2, and Carli Lloyd scored a hat trick (three goals) in the first sixteen minutes. Unbelievably fast? How much time did it take to complete hat tricks in other World Cup games? In this next graph, the shorter the bar, the faster a hat trick was scored. The historic nature of Lloyd’s hat trick is again visually obvious: her bar is roughly half the length of the second shortest bar (which is very close in length to the third and fourth shortest).

Without much math, then, we’ve gained insight on what makes an athletic performance historic. A critical element is the data. Babe Ruth hit 1.4 times more homers than the average team in 1920. Jerry Rice was similarly far ahead of his nearest career competitor. And Carli Lloyd scored her hat trick in half the time of the next fastest effort. If you dig into the data, you’ll see that the other World Cup hat tricks not only took more time but did not occur in a final. In each case, the numbers, calculated or visualized, emphasize the unbelievable improbability of a season, career, or game.

A response to all this analysis can be “I just want to watch the game.” But watching a game can still allow a lot of time for quick analysis. Take the NFL. An average game lasts well over three hours. How much actual action occurs? In football, the clock often keeps running as teams huddle or take formation. According to statistics site FiveThirtyEight, the average amount of action in an NFL game is eighteen minutes. And how much of the three hours is commercials? Fifty minutes! With such limited opportunity to jump up and root for the home team, we might feel we’re putting down roots, becoming true couch potatoes. With the tools of this book, when someone says, “Wow, that’s amazing!” you’ll be able to flip a coin, roll a die, jot down a few numbers, or plot some data and reply, “Want to know just how amazing?”

Highlight reels could be renamed outlier reels. Within the stream of daily and weekly highlights are moments that will transcend time. Analytics can help us recognize the historic. We’ve begun assembling our analytics toolbox. In the coming chapters, we’ll add to it so we can more fully appreciate the unforgettably unbelievable and get in the game of sports analytics.