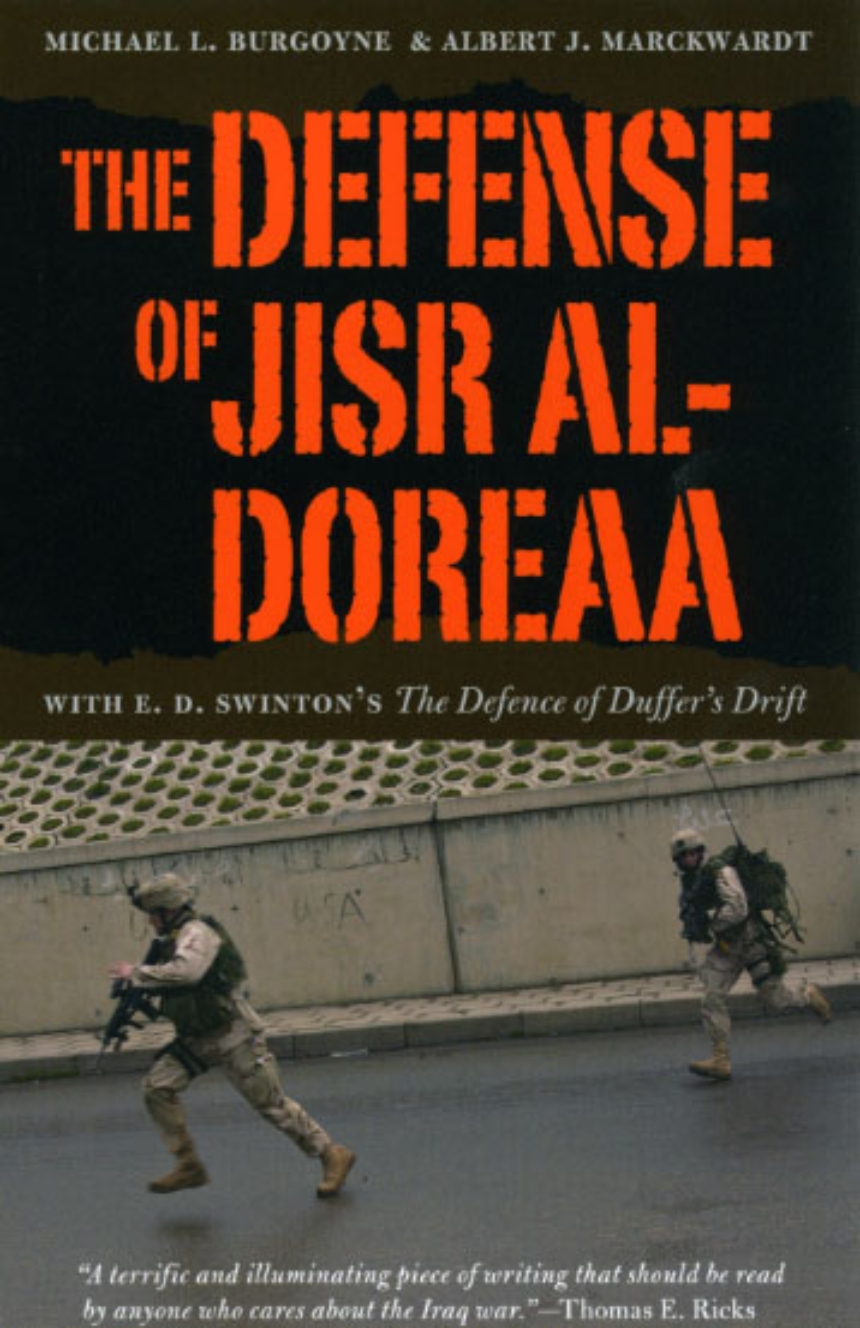 With E. D. Swinton’s "The Defence of Duffer’s Drift"

With E. D. Swinton’s "The Defence of Duffer’s Drift"

With a Foreword by John A. Nagl

Following the invasion of Iraq in 2003 the U.S. military found itself in a battle with a lethal and adaptive insurgency, where the divisions between enemy and ally were ambiguous at best, and working with the local population was essential for day-to-day survival. From the lessons they learned during multiple tours of duty in Iraq, two American veterans have penned The Defense of Jisr al-Doreaa, an instructional parable of counterinsurgency that addresses the myriad of difficulties associated with war in the postmodern era.

In this tactical primer based on the military classic The Defence of Duffer’s Drift, a young officer deployed for the first time in Iraq receives ground-level lessons about urban combat, communications technology, and high-powered weaponry in an environment where policy meets reality. Over the course of six dreams, the inexperienced soldier fights the same battle again and again, learning each time—the hard way—which false assumptions and misconceptions he needs to discard in order to help his men avoid being killed or captured. As the protagonist struggles with his missions and grapples with the consequences of his mistakes, he develops a keen understanding of counterinsurgency fundamentals and the potential pitfalls of working with the native population.

Accompanied here by the original novella that inspired it, The Defense of Jisr al-Doreaa offers an invaluable resource for cadets and junior military leaders seeking to master counterinsurgency warfare—as well as general readers seeking a deeper understanding of the wars in Iraq and Afghanistan. Just as its predecessor has been a hallmark of military instruction, The Defense of Jisr al-Doreaa will draw the road map for counterinsurgency in the postmodern world.

“A timely, necessary tactical guide for junior officers today. . . . Majors Michael L. Burgoyne and Albert J. Marckwardt have written, arguably, the most practical book to come out of Iraq yet. . . . A significant contribution to soldiers present and future.”

“This is a terrific and illuminating piece of writing, one of the best things to come out of the Iraq war. It reads to me like a history of the conflict as it would be told by a smart American platoon leader. It should be in the rucksack of every soldier heading to Iraq, and also should be read by anyone who cares about this war. If you want to support our troops, buy it right now.”

“When I was still a ROTC cadet or a very junior officer—I forget which—I read The Defence of Duffer’s Drift for the first time. It really did not make that much of an impression on me then. Now, around 40 years later and a lifetime of studying Counterinsurgency (COIN) and other Small Wars, I read it again in conjunction with Mike Burgoyne and Jim Marckwardt’s update of E. D. Swinton’s classic of British imperial warfare. These two (at the time) U.S. Army Captains have written a modern classic that not only ranks with its model but should be read alongside it, alternating chapters (dreams) from the one to the other. The experiences of 2LT Phil Connors and Lieutenant Backsight Forethought share the commonality of learning from tactical mistakes that have strategic consequences. While their situations are different and B.F.’s approach to his human terrain would have spelled disaster for Connors, the requirement that Swinton, Burgoyne, and Marckwardt impose on their protagonists—to understand their operational environment—remains the essence of the junior officer’s task in COIN and other Small Wars.”

“Counterinsurgency (COIN) warfare is a complex and fluid endeavor that requires a way of warfighting that is different from the conventional methodology with which most civilians and recruits are familiar. This book by Michael Burgoyne and Albert Marckwardt allows the reader to learn what is required of soldiers in a COIN environment, from security measures, to application of force, the treatment of non-combatants, the value of cultural understanding, to dealing with Clausewitz’s elements of friction and chance. The Defense of Jisr Al-Doreaa is a must read for any young soldier going in country or any civilian hoping to understand more thoroughly the challenges faced by U.S. soldiers in Iraq and Afghanistan.  The work offers the opportunity to learn real lessons without having to experience them the hard way. Burgoyne and Marckwardt have done a marvelous job of making the lessons come alive and illustrating the need and value of informed, adaptive informed leadership.”

Dr. Ed Coss, author of All for the King's Shilling: The British Soldier under Wellington, 1808-1814

“This captivating book brings to light the intricacies and imbroglios of counterinsurgency warfare for the tactical leader and soldiers on the ground. . . . Yet another fine addition to the lessons of counterinsurgency at a warfighter’s disposal, and should be read by all ranks and branches throughout the services.”

“The new ‘Defense’ is a respectful and relevant update to ‘Defence’. . . . Their contemporary tale could enlighten anyone who thinks the Boer is a bore. While Swinton seems quaint, the officers are current and quick.”

Foreword by John A. Nagl

The Defence of Duffer’s Drift