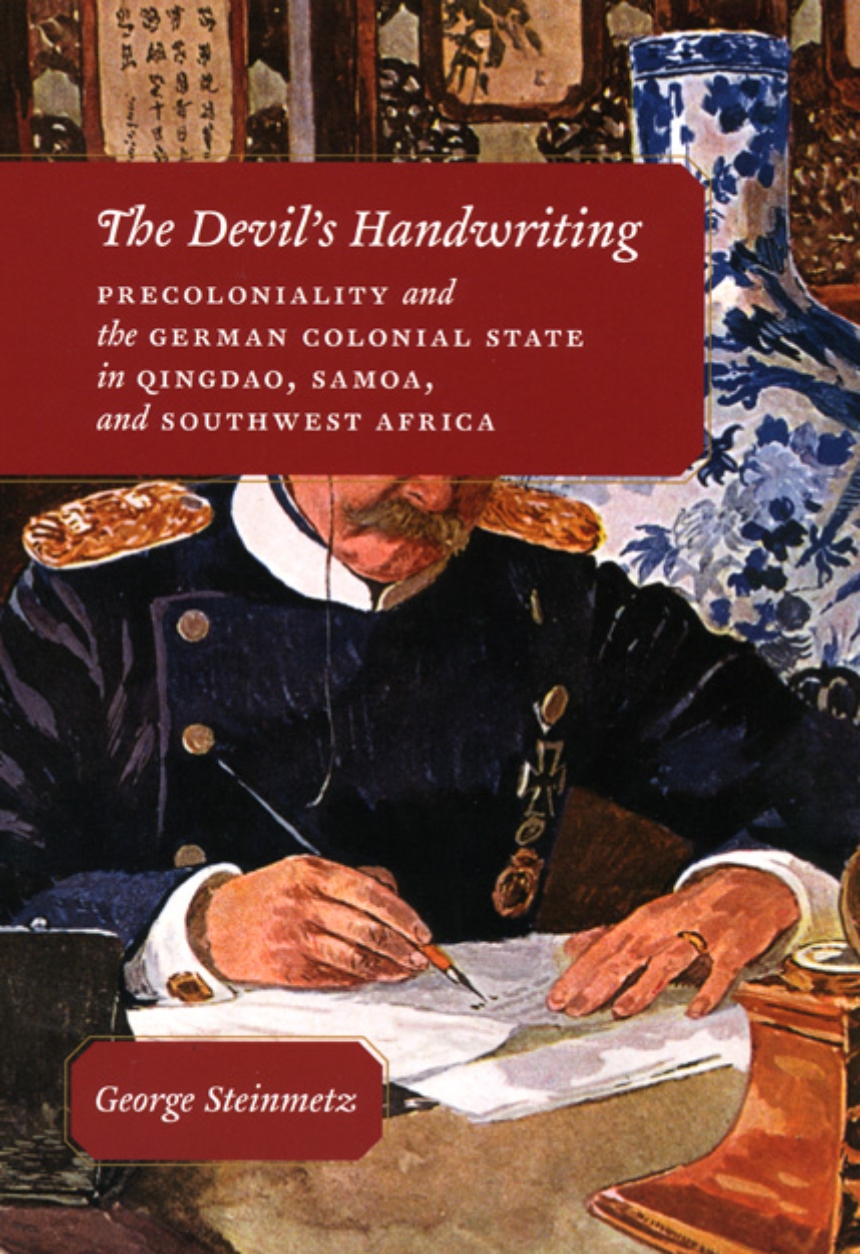 Precoloniality and the German Colonial State in Qingdao, Samoa, and Southwest Africa

Precoloniality and the German Colonial State in Qingdao, Samoa, and Southwest Africa

Germany’s overseas colonial empire was relatively short lived, lasting from 1884 to 1918. During this period, dramatically different policies were enacted in the colonies: in Southwest Africa, German troops carried out a brutal slaughter of the Herero people; in Samoa, authorities pursued a paternalistic defense of native culture; in Qingdao, China, policy veered between harsh racism and cultural exchange.
Why did the same colonizing power act in such differing ways? In The Devil’s Handwriting, George Steinmetz tackles this question through a brilliant cross-cultural analysis of German colonialism, leading to a new conceptualization of the colonial state and postcolonial theory. Steinmetz uncovers the roots of colonial behavior in precolonial European ethnographies, where the Hereros were portrayed as cruel and inhuman, the Samoans were idealized as “noble savages,” and depictions of Chinese culture were mixed. The effects of status competition among colonial officials, colonizers’ identification with their subjects, and the different strategies of cooperation and resistance offered by the colonized are also scrutinized in this deeply nuanced and ambitious comparative history.

“The Devil’s Handwriting is a masterly study of the capacious nature of the colonial form. Comparing three twentieth- century German colonies, Steinmetz demonstrates with great acuity the multiple ways that German administrators and ethnographers deployed the rule of difference in the management of colonial populations. I know of no other study of the colonial state that combines such a breathtaking depth and breadth of archival analysis with such an acute sensibility of the play of difference within the rule of difference. The writing is open, engaging, personable, even as the material is, at times, devastating.”

“A book of extraordinary erudition and theoretical acuity, The Devil’s Handwriting opens up an entirely new angle of vision on the colonial state, on its regimes of knowledge, its techniques of governance, its diverse historical determinations. Steinmetz’s comparative grasp of the colonial archive is astounding; with this volume he reframes the field of colonial studies tout court. A truly impressive achievement.”

“In this careful study of three very different cases within a short-lived and spatially limited overseas empire, George Steinmetz sheds brilliant new light on both the general nature of the colonial state and the outward projection of Germany’s exceptional path to modernity.”

Ralph A. Austen, University of Chicago

"The lengthy theoretical introduction offers a critical base for future scholarly debate on colonialism. . . . An essential addition to library collections on European colonialism."

"The wealth of detail and information synthesized here is remarkable, and the book as a whole goes a long way towards filling an inexplicable gap in the historical literature."

"The book is thought-provoking, as it offers substantial evidence of the fact that colonial regimes were not uniform, but highly complex and heterogeneous. The study warrants much attention from scholars, especially as it is one of the few works on German colonial history that applies a comparative approach."

"Steinmetz’s study is pathbreaking. He demonstrates convincingly that a comparative approach to Germany’s overseas possessions is possible and, more inmportantly, necessary, especially if one wants to understand more completely German colonialism with all its nuances, its continuities and discontinuities, its similarities and its differences."

"Steinmetz’s vast and detailed examination of ’native policy’ in three very different German colonies provides a welcome intervention into long-standing and sometimes stale debates. He makes a convincing case that managing and stabilizing local populations . . . were the chief concern of the modern colonial state, and he proposes a flexible framework to help explain vast divergences in the treatment of colonial subjects."

CHAPTER 2
"A World Composed Almost Entirely of Contradictions": Southwest Africans in German Eyes, before Colonialism
Precolonial and Protocolonial Imagery of Southwest Africans
The Khoikhoi: The Path to Precolonial Mimicry
The Rehoboth Basters: Pure Intermediacy
The Ovaherero: A Radically Simplified Ethnographic Discourse
Toward Colonialism

CHAPTER 3
From Native Policy to Genocide to Eugenics: German Southwest Africa
Accessing the Inaccessible
The Germans and the Witbooi People
"Rivers of Blood and Rivers of Money": Germans and Ovaherero
Collaboration and the Rule of Difference: The Reheboth Basters under German Rule
Conclusion

CHAPTER 4
"A Foreign Race That All Travelers Have Agreed to be the Most Engaging": The Creation of the Samoan Noble savage, by way of Tahiti
The Idea of Polynesian Noble Savagery
Europeans on Polynesia in the Wake of Wallis and Bougainville: The Tahitian Metonym
Polynesia and Tahiti in German Eyes, 1770s-1850
Nineteenth-Century Social Change in Polynesia and the Increasing Attractiveness of Samoa
Nineteenth-Century Samoa: From Lapérouse to the Germans
The Evolution of European and German Representations of Samoa
Precolonial Guidelines for a Future Native Policy

CHAPTER 5
"The Spirit of the German Nation at Work in the Antipodes": German Colonialism in Samoa, 1900-1914
Salvage Colonialism
The Sources of Native Policy in Samoa
Class distinction and Class Exaltation
Conclusion: Resistance and the Limits on Colonial Native Policy

Appendix 1: A Note on Sources and Procedures
Appendix 2: Head Administrators of German Southwest Africa, Samoa, and Kiaochow
Bibliography
Index
Back to top