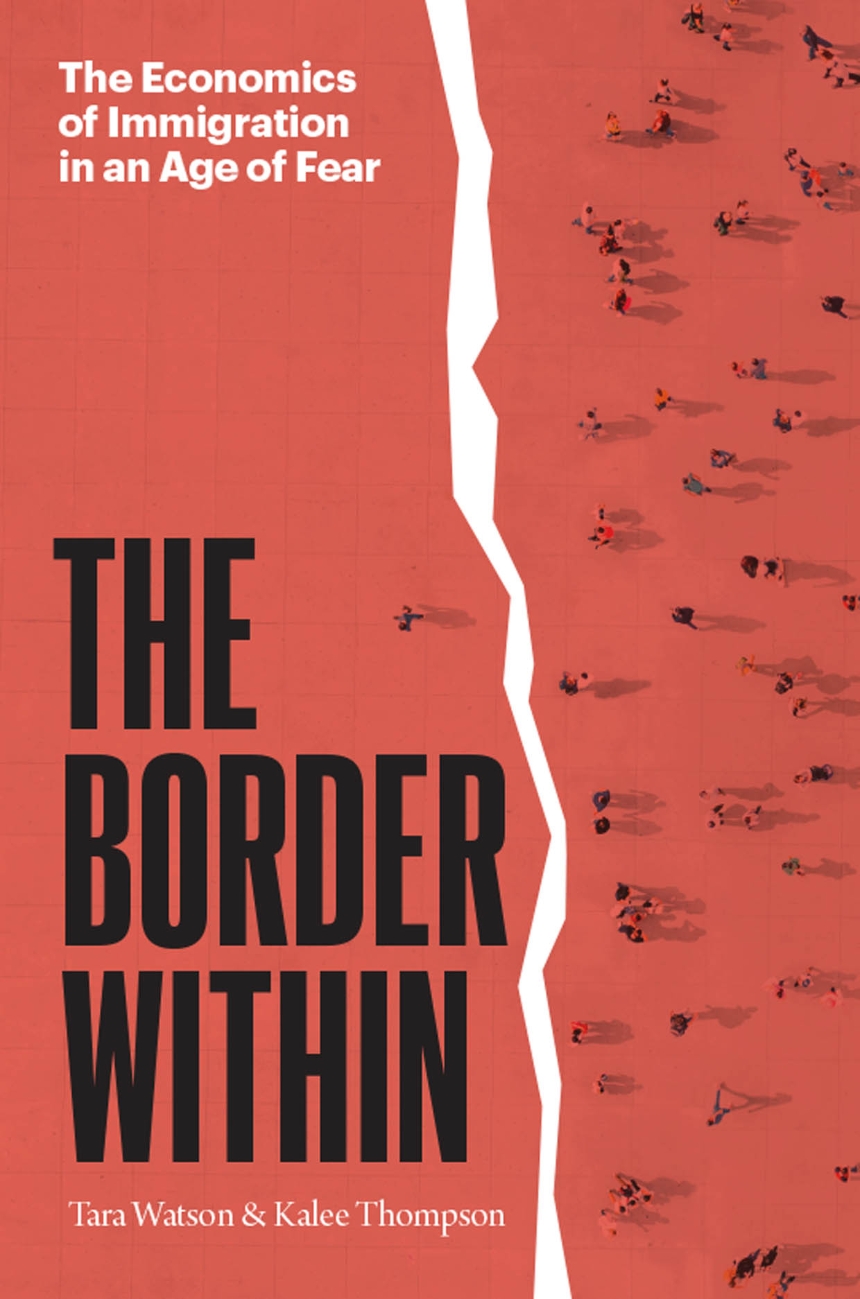 The Economics of Immigration in an Age of Fear

The Economics of Immigration in an Age of Fear

An eye-opening analysis of the costs and effects of immigration and immigration policy, both on American life and on new Americans.

For decades, immigration has been one of the most divisive, contentious topics in American politics. And for decades, urgent calls for its policy reform have gone mostly unanswered. As the discord surrounding the modern immigration debate has intensified, border enforcement has tightened. Crossing harsher, less porous borders makes unauthorized entry to the United States a permanent, costly undertaking. And the challenges don’t end on the other side.

At once enlightening and devastating, The Border Within examines the costs and ends of America’s interior enforcement—the policies and agencies, including ICE, aimed at removing immigrants already living in the country. Economist Tara Watson and journalist Kalee Thompson pair rigorous analysis with deeply personal stories from immigrants and their families to assess immigration’s effects on every aspect of American life, from the labor force to social welfare programs to tax revenue. What emerges is a critical, utterly complete examination of what non-native Americans bring to the country, including immigration’s tendency to elevate the wages and skills of those who are native-born.

News coverage has prompted many to question the humanity of American immigration policies; The Border Within opens a conversation of whether it is effective. The United States spends billions each year on detention and deportation, all without economic gain and at a great human cost. With depth and discipline, the authors dissect the shock-and-awe policies that make up a broken, often cruel system, while illuminating the lives caught in the chaos. It is an essential work with far-reaching implications for immigrants and non-immigrants alike.

"In The Border Within, Watson and Thompson masterfully distill decades of economics research and interweave it with stories of real people. Anyone looking for a clear understanding of issues surrounding undocumented immigration in the United States, delivered in engaging prose, would do well to read this. It is a terrific book that gets the economics research right, makes it readable, and puts a human face on it. That is hard to do."

Kristin F. Butcher, director of the Center on Children and Families, Cabot Family Chair, and senior fellow in Economic Studies, Brookings Institution, and the Marshall I. Goldman Professor of Economics, Wellesley College

"A very well written and carefully researched book on the benefits and costs of interior immigrant enforcement in the United States. With interesting background on US immigration policy that highlights the parallels between discrimination against new immigrants in the first globalization period and now, the authors have provided a clear and engaging presentation of the most important issues related to US immigration policy."

"An excellent book with significant potential impact. The authors have done something quite novel: combined a review of the empirical social science evidence on the costs and benefits of undocumented immigration and the effects of various policies with personal stories about the lives of undocumented immigrants. The stories provoke an emotional, moral response, while the more scientific approach taken by the academic summaries provides evidence and rational calculations of costs and benefits. The writing is clear and propulsive, and the personal narratives lend a sense of urgency to the discussions of policy. If I were teaching a class on immigration economics, I would assign this book."

The American narrative celebrates the idea of immigrants arriving to build a better life in a land of abundance. Yet Americans have always struggled with immigration, particularly as it intersects with race, poverty, and economic opportunity. In the last couple of decades, the immigrant share of the US population has grown greater than at any time since the early twentieth century—as has the centrality of the immigration debate.

Since the year 2000, an average of a million people from all over the world have been granted legal permanent status (“green cards”) in the United States each year. Federal law sets annual limits on how many individuals can be legally admitted to the country, with priority given to spouses, minor children, and parents of US citizens, who collectively make up two-thirds of the annual total, as well as to people with certain in-demand professional skills. There’s also a “diversity” lottery for residents of countries that don’t send many people (in 2018, more than fourteen million people competed for fifty thousand slots).

But many individuals are unable to immigrate legally. Even for those with fairly close family ties—the adult children of US citizens, for example—there is currently a six- to seven-year wait for would-be immigrants from most of the world. No more than 7 percent of green cards are issued to migrants coming from any given country in any given year, making it harder to legally enter from some countries than others. For an unmarried adult from Mexico with a US-citizen parent, the current wait time is more than nineteen years. A less-educated resident of Mexico without relatives in the United States typically cannot expect any route to legal immigration in their lifetime. Though the current political rhetoric often calls for newcomers to simply “wait in line,” this sentiment reflects a misunderstanding of our immigration system. For many would-be immigrants, there is no line.

Millions of people are determined to come to the US even in the absence of a legal pathway, of course, and many of them succeed. Almost a quarter of the foreign-born population now living in the United States, and more than 40 percent of all noncitizens, are in the country without legal status. Of the 10.5 million undocumented residents, about half crossed the border illegally, while the rest arrived on a temporary visa and stayed after it expired.

Concerns about the scale of immigration and the fact that so many immigrants live in the US without authorization has prompted a desire for policy action. Many US citizens are concerned about immigrants taking American jobs, using social services, and committing crime, though—as we discuss later in this book—these concerns for the most part do not align with the evidence on immigration’s impacts. Some anti-immigrant sentiment is rooted in racism and fear of demographic change. As the number of undocumented immigrants living in the United States has increased substantially over recent decades, so too have enforcement efforts.

There are three main approaches to reducing the number of undocumented immigrants in the United States. One is to prevent unauthorized immigration through aggressive border control. Fears about terrorism and the drug trade add further impetus to secure the border. Indeed, advanced technology and expanded manpower in recent decades have greatly enhanced border security. Though increased security is also evident along the US border with Canada, most of the enforcement effort has been focused at the southern border.

Today, it is much more expensive to cross the southern border with the help of a paid guide than it was in the past... It is also more physically dangerous—as well as riskier in terms of the likelihood, and consequences, of being caught.

Border enforcement both directly and indirectly impacts the number of long-term residents within the United States. Somewhat ironically, expanded enforcement efforts at the border have led some unauthorized residents to become more deeply rooted in their American communities. The relatively porous border of the past meant that migration was often temporary, and fluidly responsive to economic conditions in both the US and in immigrants’ home countries. Now, given the risks and expense of border crossing, those who choose to come to America without legal status are more often those who hope to settle here. Once in the US, many migrants do not dare return to their country of origin even for a visit, for fear that they will not be able to reenter. Ties with family in the country of origin are weakened. America becomes home.

One administrative approach is to focus on a narrow set of objectives such as removing immigrants who present a public safety risk and making it more difficult for unauthorized immigrants to work in the formal sector. These goals can be achieved in a way that is transparent and systematic and includes due-process protections. Alternatively, an administration can choose a high-visibility and capricious approach, making it clear that any undocumented immigrant is at risk of deportation regardless of personal circumstance. As we illustrate in this book, directing resources in this way does not achieve stated objectives like reducing crime or discouraging workplace competition, but does sow fear and confusion in immigrant communities.

Aggressive interior enforcement impacts a wide range of economic behaviors, often in ways that go beyond the explicit text or ostensible goals of the policy. In the legal context, the term “chilling  effect” is used to describe the impact of legal actions that deter individuals from exercising their rights without formally curtailing those rights. In the 1965 Supreme Court case Lamont v. Postmaster General, Chief Justice William Brennan argued that requiring individuals to sign up at the post office if they wished to receive communist literature constituted a chilling effect on freedom of speech.

The enforcement of immigration policy can likewise generate chilling effects. A construction worker fearing deportation may stay quiet about an unsafe structure; an undocumented mother may decide not to enroll her citizen child in a publicly available health insurance program. Chilling effects indirectly influence the economic decision-making, educational outcomes, and health of immigrants—and are heightened when enforcement is highly visible and seemingly arbitrary in its implementation. And the consequences of enforcement extend beyond immigrants themselves, affecting American citizens living in immigrant families as well as the broader American society.