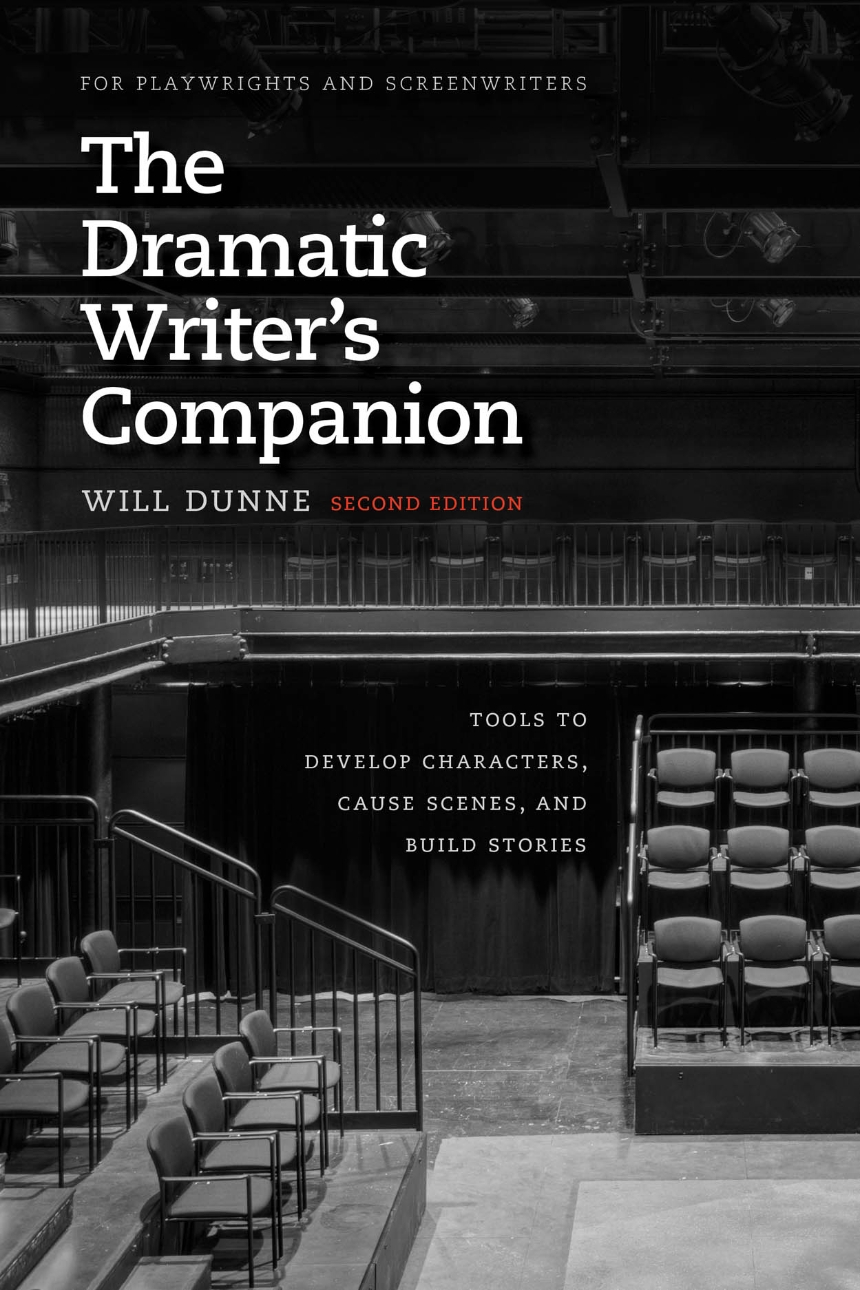 Tools to Develop Characters, Cause Scenes, and Build Stories

Tools to Develop Characters, Cause Scenes, and Build Stories

In just eight years, The Dramatic Writer’s Companion has become a classic among playwrights and screenwriters. Thousands have used its self-contained character, scene, and story exercises to spark creativity, hone their writing, and improve their scripts.
Having spent decades working with dramatists to refine and expand their existing plays and screenplays, Dunne effortlessly blends condensed dramatic theory with specific action steps—over sixty workshop-tested exercises that can be adapted to virtually any individual writing process and dramatic script. Dunne’s in-depth method is both instinctual and intellectual, allowing writers to discover new actions for their characters and new directions for their stories. The exercises can be used by those just starting the writing process and by those who have scripts already in development.  With each exercise rooted in real-life issues from Dunne’s workshops, readers of this companion will find the combined experiences of more than fifteen hundred workshops in a single guide.
This second edition is fully aligned with a brand-new companion book, Character, Scene, and Story, which offers forty-two additional activities to help writers more fully develop their scripts. The two books include cross-references between related exercises, though each volume can also stand alone.
No ordinary guide to plotting, this handbook centers on the principle that character is key. “The character is not something added to the scene or to the story,” writes Dunne. “Rather, the character is the scene. The character is the story.” With this new edition, Dunne’s remarkable creative method will continue to be the go-to source for anyone hoping to take their story to the stage.

“Dunne employs his wealth of experience as the current resident playwright at Chicago Dramatists, a Charles MacArthur Fellowship honoree, a former O’Neill Theatre Center dramaturg, and an award-winning author of such plays as How I Became an Interesting Person, Love and Drowning, and Hotel Desperado to give writers a blueprint on how to examine their ideas in depth in order to develop their plays and screenplays.”

“If you are a playwright not yet on the Pulitzer short list, or a screenwriter not yet invited to the Oscars, the best thing you can do is get to Chicago and join Will Dunne’s scriptwriting workshops at Chicago Dramatists. If you can’t do that, the next best thing is to get The Dramatic Writer’s Companion and Character, Scene, and Story and sit down to his exercises. Dunne describes clearly and succinctly how each element of drama works—each beat, each scene, each facet of character and stagecraft—and then he sets you to work to master it. The work leads wide and deep, from the hidden past to the strategies of scene, from objectives to the supernatural, from levels of desire to the pressures of conflict. Every hour’s attention to one of these mental journeys will lead you to know more, imagine better, and write more nimbly.”

“Dunne has taken everything he knows from the powerful dual standpoints of an award-winning playwright and a master teacher to create the book we’ve been waiting for. It’s all there—from every angle and every perspective—how to bring fascinating, fully-developed characters in conflict out into the light and onto the stage.”

“Dunne mixes an artist’s imagination and intuition with a teacher’s knowledge of the craft of dramatic writing. It is an irresistible combination, producing a book which is simultaneously astute and imaginative. . . . No one can teach anyone to become a dramatic writer. But it is possible to learn how to improve your writing skills. It is possible to be provoked into thinking differently, into adding different colors and dimensions to your ideas, to extend the range of images in your head, to startle your imagination; in short, to be inspired into trying new approaches and methods. The Dramatic Writer’s Companion has the potential to do all of that for a writer.”

“A breath of fresh air. Whether you’re working on your first play or your fortieth, preparing a first draft or polishing up a finished piece, The Dramatic Writer’s Companion offers challenging, thought-provoking exercises rather than formulaic ‘how-to’ solutions. This is the kind of book that not only makes plays stronger; it makes writers stronger as well.”

“The practical genius of Dunne’s writing lessons proved invaluable to me in the development of the script for my own film, Mean Creek. I have read many books on scriptwriting, most a bunch of intellectual blather about themes and structure, whereas Dunne’s approach to writing is grounded in specific and useful exercises that a writer can actually employ at the moment of creation.”

“Dunne lays out all the right questions with great precision and elegance. In the process he coolly demystifies all the dramaturgical demons; they become nothing more than the routine technical challenges faced by any craftsman.”

“Dunne meets the writer on his or her own terms, eye to eye. Unique, ambitious, and comprehensive, The Dramatic Writer’s Companion contains practical writing exercises underscored by well-developed dramatic theory.”