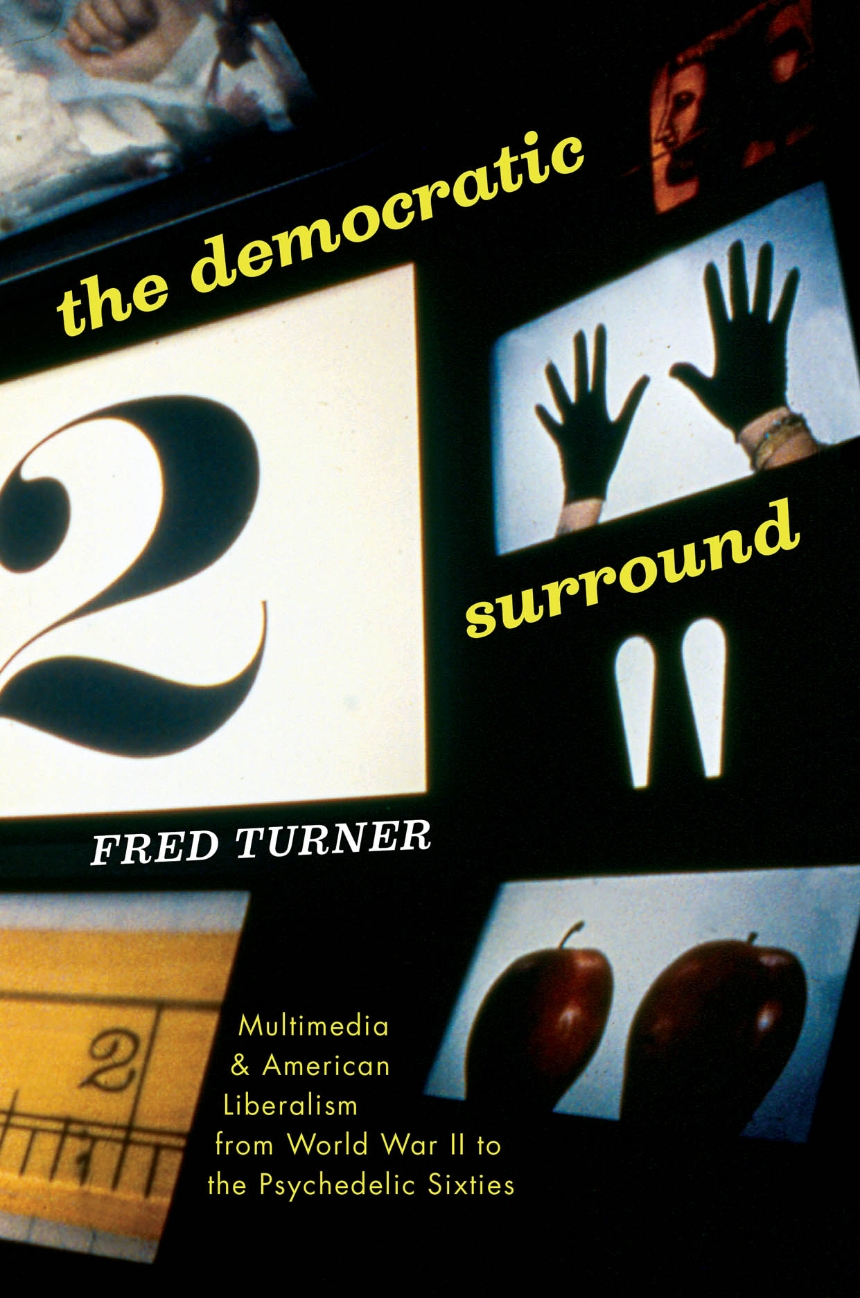 We commonly think of the psychedelic sixties as an explosion of creative energy and freedom that arose in direct revolt against the social restraint and authoritarian hierarchy of the early Cold War years. Yet, as Fred Turner reveals in The Democratic Surround, the decades that brought us the Korean War and communist witch hunts also witnessed an extraordinary turn toward explicitly democratic, open, and inclusive ideas of communication and with them new, flexible models of social order. Surprisingly, he shows that it was this turn that brought us the revolutionary multimedia and wild-eyed individualism of the 1960s counterculture.
In this prequel to his celebrated book From Counterculture to Cyberculture, Turner rewrites the history of postwar America, showing how in the 1940s and ’50s American liberalism offered a far more radical social vision than we now remember. Turner tracks the influential mid-century entwining of Bauhaus aesthetics with American social science and psychology. From the Museum of Modern Art in New York to the New Bauhaus in Chicago and Black Mountain College in North Carolina, Turner shows how some of the most well-known artists and intellectuals of the forties developed new models of media, new theories of interpersonal and international collaboration, and new visions of an open, tolerant, and democratic self in direct contrast to the repression and conformity associated with the fascist and communist movements. He then shows how their work shaped some of the most significant media events of the Cold War, including Edward Steichen’s Family of Man exhibition, the multimedia performances of John Cage, and, ultimately, the psychedelic Be-Ins of the sixties. Turner demonstrates that by the end of the 1950s this vision of the democratic self and the media built to promote it would actually become part of the mainstream, even shaping American propaganda efforts in Europe.
Overturning common misconceptions of these transformational years, The Democratic Surround shows just how much the artistic and social radicalism of the sixties owed to the liberal ideals of Cold War America, a democratic vision that still underlies our hopes for digital media today.

“Turner’s book offers an important look at how our technologies might, or might not, resonate with the democratic politics many of us hope to better exercise.”

“The Democratic Surround is a dazzling cultural history that demonstrates how American intellectuals, artists, and designers from the 1930s to the 1960s imagined new kinds of collective events—different from fascism’s crowds—that were intended to promote a powerful experience of American democracy in action. Drawing parallels across a wide set of venues—from MoMA’s Road to Victory and Family of Man shows of the mid-century period to the 1959 National Exhibition in Moscow to the Happenings of the sixties counterculture, Turner challenges us to think about the lines between information, entertainment, art, and propaganda. Along the way he shows how important the media have become to the design of collective experiences and forms of democratic citizenship. A brilliant argument from a gifted writer, this book not only informs but also surprises!”

Lynn Spigel, author of TV by Design: Modern Art and the Rise of Network Television

“This is the true story of how a small group of artists and anthropologists set out to create an alternative to fascism during World War II—and ended up setting the stage for the consumer-driven, media-saturated world we inhabit today. A gripping, well-balanced, and surprising history.”

Douglas Rushkoff, author of Present Shock: When Everything Happens Now.

“The photographic wartime propaganda of Road to Victory or the post-war humanism of The Family of Man usually don’t come to mind when accounting for Happenings, Be-Ins, expanded cinema, or Andy Warhol’s Exploding Plastic Inevitable, but they are tightly woven in the social fabric of Fred Turner’s The Democratic Surround. In what will surely be a controversial revision, Turner maps the attempts of social scientists, industrial designers, European expats, and others to mold democratic personalities as a bulwark against authoritarianism, forming a civil foundation upon which arose spatial media experiments of the arts and counterculture of the 1960s. From an Americana more associated with Aaron Copland comes the radical surround sound of John Cage; from image management of psyches, psychedelic media environments.”

Douglas Kahn, author of Noise, Water, Meat: A History of Sound in the Arts

“The history of ideas is intellectual archeology, and Stanford professor Turner is a man with a well-whetted pickaxe and an arsenal of delicate brushes.”

“The creators of 1960s happenings claimed that they were using sights and music to undermine the fascist American state. However, as Turner demonstrates here, the legacy of happenings dates back to WWII, and they enjoyed significant governmental support. Looking at American concerns with the abuse of media by fascist leaders like Adolf Hitler, the author makes a convincing argument that leftist artists and social scientist developed a theory of multimedia installations what would use mass communication techniques to further the cause of democracy rather than undermine it. . . . This book represents a significant contribution to literature on mass media and its uses in the 20th century. Highly recommended.”

“What makes the book so fascinating as both an intellectual and cultural history is Turner’s ability to juggle multiple disciplines and schools of thought, all the while showing how a diverse lot of thinkers were grappling with the same questions about democracy, personality, and technology.  . . . [An] excellent and thought-provoking book.”

“The Democratic Surround is the book Alexis de Tocqueville would have written if, instead of spending his time with the respectable menfolk of New England in the 1830s, he had been lucky enough to hang out with the psychedelic pioneers of the California of the 1960s. Once he got over the initial shock (and it should not have taken him long: Tocqueville had seen his share of radical enthusiasts), he would have realized that in a prosperous and populous America at the peak of its Cold War glory, the experience of participation in a democratic polity was increasingly dependent on the immersion of its citizens in all—enveloping media environments, tightly composed communicative architectures where they could receive a vivid impression of life in a diverse and egalitarian society. . . .The achievement of Turner’s book is to reveal the technical and aesthetic mediations—a heady combination of social-scientific ideas, multi-media formats, and new styles of artistic installation and performance—that enabled this phenomenological recalibration of the American democratic experience.”

World War II and the Making of the Democratic Surround

The Democratic Surround in the Cold War