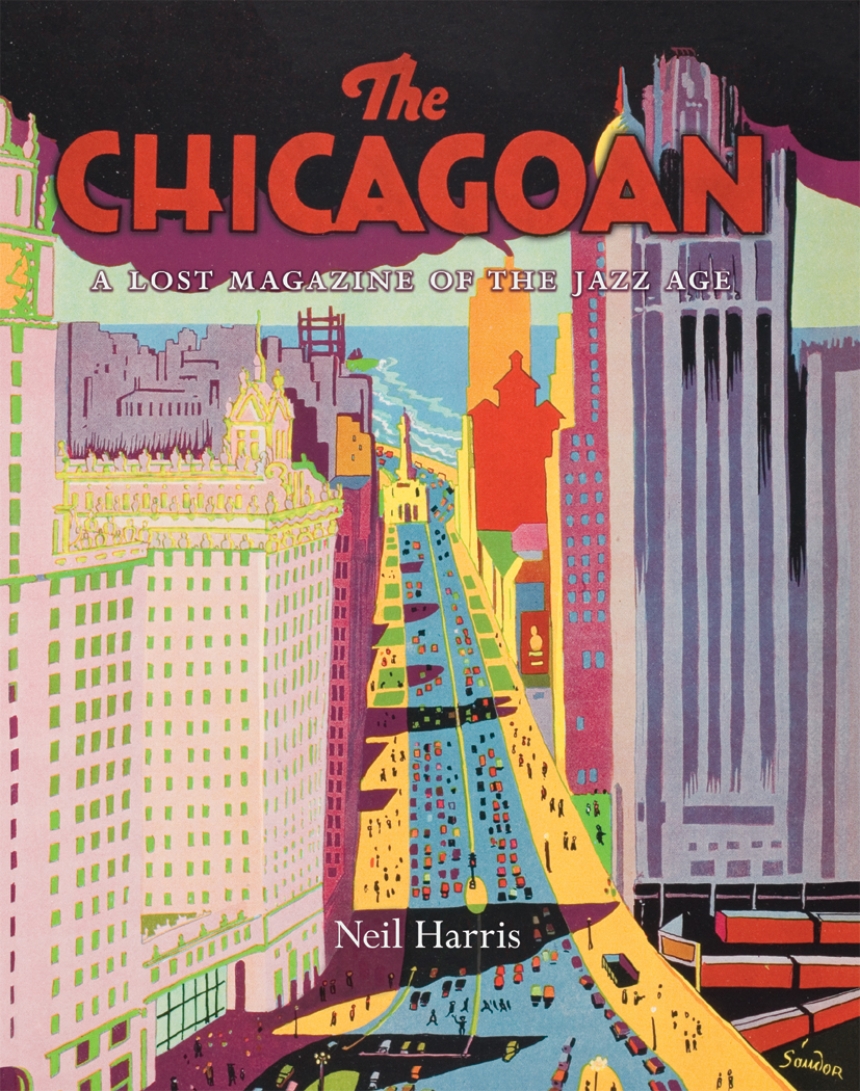 A Lost Magazine of the Jazz Age

A Lost Magazine of the Jazz Age

With the assistance of Teri J. Edelstein
While browsing the stacks of the Regenstein Library at the University of Chicago some years ago, noted historian Neil Harris made a surprising discovery: a group of nine plainly bound volumes whose unassuming spines bore the name the Chicagoan.  Pulling one down and leafing through its pages, Harris was startled to find it brimming with striking covers, fanciful art, witty cartoons, profiles of local personalities, and a whole range of incisive articles.  He quickly realized that he had stumbled upon a Chicago counterpart to the New Yorker that mysteriously had slipped through the cracks of history and memory.
Here Harris brings this lost magazine of the Jazz Age back to life. In its own words, the Chicagoan claimed to represent “a cultural, civilized, and vibrant” city “which needs make no obeisance to Park Avenue, Mayfair, or the Champs Elysees.” Urbane in aspiration and first published just sixteen months after the 1925 appearance of the New Yorker, it sought passionately to redeem the Windy City’s unhappy reputation for organized crime, political mayhem, and industrial squalor by demonstrating the presence of style and sophistication in the Midwest.  Harris’s substantial introductory essay here sets the stage, exploring the ambitions, tastes, and prejudices of Chicagoans during the 1920s and 30s.  The author then lets the Chicagoan speak for itself in lavish full-color segments that reproduce its many elements: from covers, cartoons, and editorials to reviews, features—and even one issue reprinted in its entirety.
Recalling a vivid moment in the life of the Windy City, the Chicagoan is a forgotten treasure, offered here for a whole new age to enjoy.

The University of Chicago Library has a digital edition of the magazine.  •  Read an interview with the author and see a gallery  of covers and illustrations.

“How attractive to have this lively and short-lived magazine made accessible and brilliantly contextualized by Neil Harris. Harris is the ideal scholar to explain how the Chicagoan helped to define the city during this era, setting Prohibition and gangland notoriety in counterpoint to stylish innovations in music, art, and architecture. This handsome volume is invaluable to those intrigued by the growth of urban identity and self-awareness during the second quarter of the twentieth century. Although the word ‘lifestyle’ did not appear in a dictionary until 1961, The Chicagoan: A Lost Magazine of the Jazz Age demonstrates just how curious Americans were about matters of lifestyle more than a generation earlier.”

“Founded in the 1920’s, the New Yorker for almost a century has been one of the most vibrant and important magazines in America. Little did most of us know, however, that a similar periodical began at almost the same time and seemed to offer the same intellectual liveliness and cultural excitement of its East Coast counterpart. Neil Harris has recaptured the spirit and story of the Chicagoan in this fresh and colorful book.”

“Witty, artsy, and slightly snooty . . . . Despite [the editors’] frequent protests that [their] city was better than its Al Capone image, the magazine chronicled the doings of Scarface as often as it reviewed opera at Ravinia.”

“It gleams. It glitters. It practically shouts, ‘Sophistication!’ except for the fact that the truly sophisticated never shout. A silky murmur will do. It was called The Chicagoan, and from 1926 to 1935 . . . it graced the coffee tables and guided the cultural choices of the city’s elite. It was a magazine, but it was more than that, too: It was a mindset. An attitude. A lofty perspective on the passing show. Thanks to the archival detective work of Neil Harris, emeritus professor at the University of Chicago, we can glide our way back to an era when elegance mattered—not only in dress and deportment, but also in sentence and image. In The Chicagoan: A Lost Magazine of the Jazz Age . . . a hefty, gorgeous hunk of a book that reproduces one entire issue as well as 149 covers and many articles, a vanished era returns. It comes back in all of its fussy glory, its daffy humor, its gentle insistence that even a city best known for gangsters and stockyards could yearn for beauty and glamour.—Julia Keller, Chicago Tribune

“From 1926 to 1935, a group of Midwestern writers, editors, and artists published a magazine strikingly similar to this one. The Chicagoan ran profiles, reviews, and editorials, interspersed with cartoons, and presented breezy dispatches on local events in a section that no one seemed embarrassed to call ‘Talk of the Town.’”

“Before the advent of microfiche and electronic records, many smaller-circulation periodicals were inevitably lost to trash heaps and poor preservation methods. The Chicagoan, a colorful Midwestern magazine that was published from 1926 to 1935, was luckily saved from this oblivion by the historian Neil Harris. . . . He has since compiled the periodical’s greatest hits into th[is] beautiful and vibrant book.”

“A nine-year wonder. . . . As demonstrated by this elegant collection of covers, illustrations, and stories from the Chicagoan, in its heyday Chicago was the most stylish, exciting and quintessentially American of all the cities that encircle the United States. The Chicagoan lasted only nine years, but they were well chosen, from 1926 to 1935, straddling prohibition, the depression and the jazz age. Although deliberately aping the New Yorker, founded a year earlier, its cover design was entirely its own, a cocktail of art-deco design, slabby poster colours and mordant wit. The sinuous illustrations cascading across the inside pages made it visually far superior to the original . . . . Perhaps it was too beautiful to survive.”

“A wonderful and lavish book. . . . well-reproduced and  well-illustrated. The only thing that could top this would be a Nelson Algren renaissance. —Robert Birnbaum, themorningnews.com

“Reading the dusty old mag in this beautiful new book made us nostalgic for an urban culture that we never got to experience. The Chicagoan was civically engaged in a way publications nowadays rarely are. No compunction exists about taking shots at politicians, making hay about the naming of the Art Institute lions, or moaning about the difficulty of hailing a cab on Michigan Avenue. Though we hardly knew ye, Chicagoan, you’re suddenly sorely missed.”

“A testament to serendipity. . . . Harris does a wonderful job of situating the magazine in the urban cacophony of 1920s Chicago, a city at the height of its power.”

“The product of [Neil] Harris’ years of thorough and thoughtful research, now fashioned into a fantastically hefty volume, a treasure-trove of our city’s cultural history. . . . There were no stars at The Chicagoan. The Second City’s scrappy reputation held firm with the magazine’s hodgepodge of artists, journalists and academics who filled its pages twice a month (once a month in later years). They remain largely unknown, to this day, though Harris gives them their due, both in his eloquent historical analysis and in an appendix at the end of the book.”

“Entrepreneurs and journalists dreaming of the next great Chicago magazine will find the Chicagoan compelling, the writing interesting, the mere fact of its existence perhaps providing succor.”

“Social and cultural scholars will find [The Chicagoan] a joy, but this primarily pictorial book, with its witty textual nuggets and stylized Art Deco illustrations, will appeal to a nonacademic audience as well. . . . Highly recommended [for] all library collections.”

"Harris’s work ably reinstates the Chicagoan and joins the essential literature on the cultural history of Chicago and the graphic art of the period."