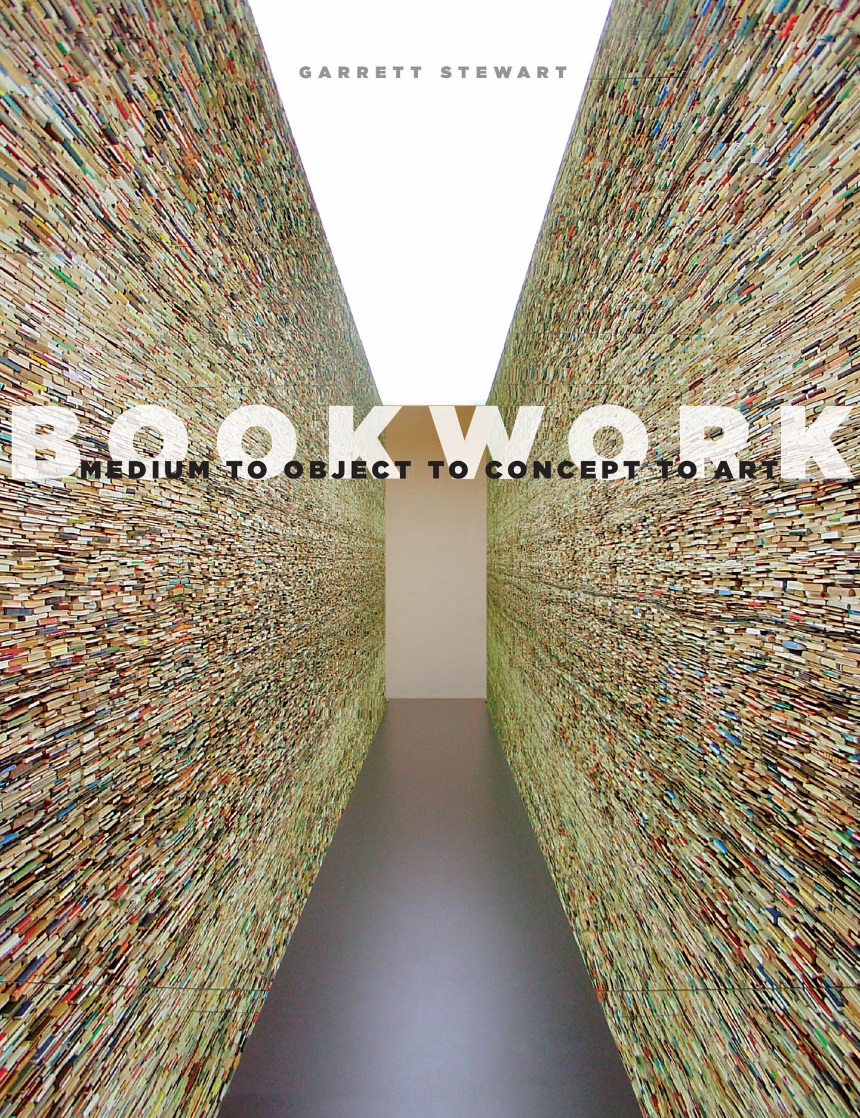 Medium to Object to Concept to Art

Medium to Object to Concept to Art

“There they rest, inert, impertinent, in gallery space—those book forms either imitated or mutilated, replicas of reading matter or its vestiges. Strange, after its long and robust career, for the book to take early retirement in a museum, not as rare manuscript but as functionless sculpture. Readymade or constructed, such book shapes are canceled as text when deposited as gallery objects, shut off from their normal reading when not, in some yet more drastic way, dismembered or reassembled.” So begins Bookwork, which follows our passion for books to its logical extreme in artists who employ found or simulated books as a sculptural medium. Investigating the conceptual labor behind this proliferating international art practice, Garrett Stewart looks at hundreds of book-like objects, alone or as part of gallery installations, in this original account of works that force attention upon a book’s material identity and cultural resonance.

Less an inquiry into the artist’s book than an exploration of the book form’s contemporary objecthood, Stewart’s interdisciplinary approach traces the lineage of these aggressive artifacts from the 1919 Unhappy Readymade of Marcel Duchamp down to the current crisis of paper-based media in the digital era. Bookwork surveys and illustrates a stunning variety of appropriated and fabricated books alike, ranging from hacksawed discards to the giant lead folios of Anselm Kiefer. The unreadable books Stewart engages with in this timely study are found, again and again, to generate graphic metaphors for the textual experience they preclude, becoming in this sense legible after all.

“When we read a book, it is always the physical volume in our hands—or in some substitute for hands—that is being read. That reading is a hands-on experience, we well understand, but what is to be said about artists taking hands to the book as object, transmogrifying it and separating it from readability? Garrett Stewart thinks deeply about the experience of reading, and how memories of reading hover over the altered book, or as Stewart calls it, bibliobjet, once it has been made into an object of art. Bookwork is an eloquent survey of the conceptual parameters of the bibliobjet and the multitudinous ways by which artists of the book object bring forth other orders of its reading.”

“Bookwork is a bold, imaginative, and passionate study of the works of sculpture and installation art that are either made out of books or that reference books as cultural icons. No one has taken the study of book objects into as detailed a discussion as Garrett Stewart, who uncovers these objects’ important relation to conceptual art and the tradition of the readymade. Bookwork bridges art history and the sculptural tradition at the edge of the field of artists’ book production—creating a vivid link between these two communities. It will find a ready audience among those who study and practice the art Stewart explores.”

“Garrett Stewart focuses on the kind of book art that renders the book a physical object rather than a medium for reading with a thoroughness and theoretical sophistication that are unmatched in the literature on the subject. In its scope, erudition, and felicitous blend of museum stroll and sophisticated analysis, this book will engage and delight a much wider range of readers than most scholarly monographs. Sustained, original, intellectually stimulating, and often brilliant, Bookwork will become the source to consult on this topic for years to come.”

“This fascinating work will change the way readers think about books and their purpose.”