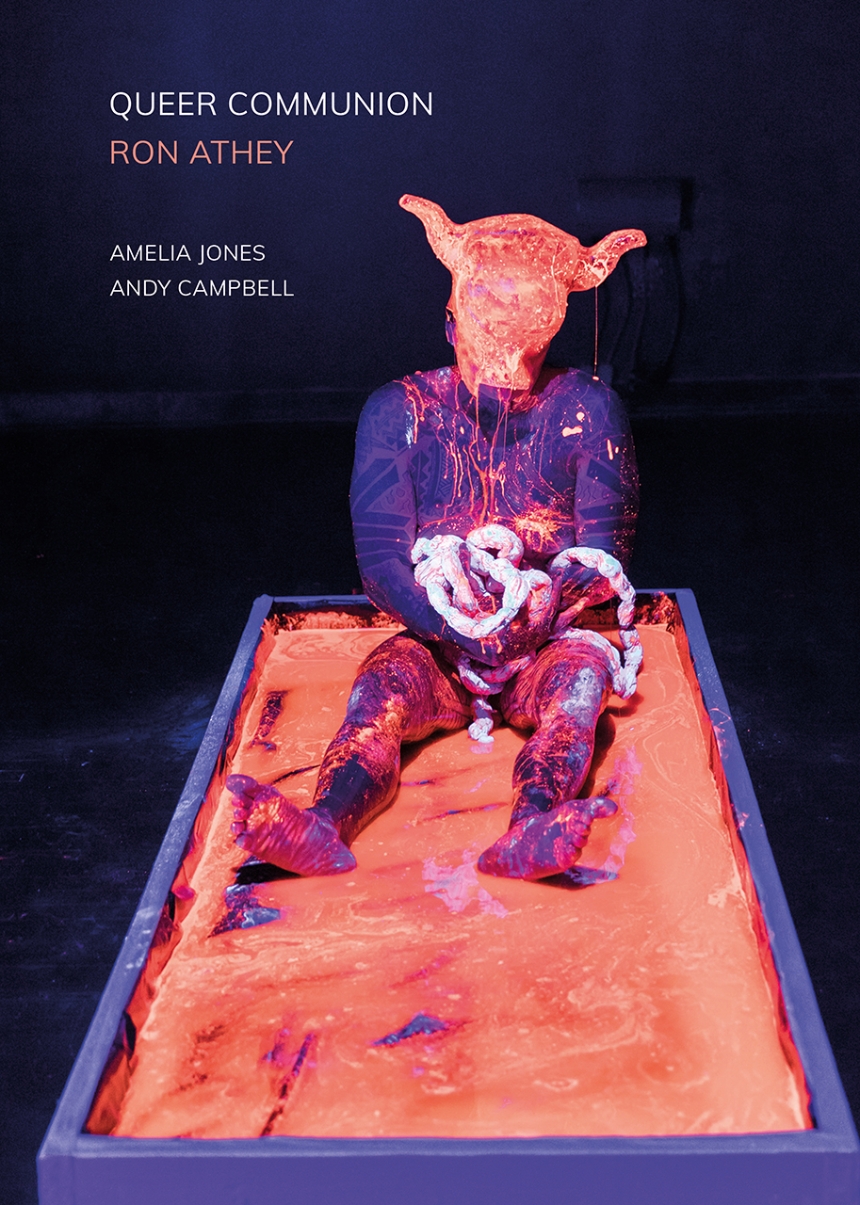 Ron Athey is one of the most important, prolific, and influential performance artists of the past four decades. A singular example of lived creativity, his radical performances are odds with the art worlds and art marketplaces that have increasingly dominated contemporary art and performance art over the period of his career.

Queer Communion, an exploration of Athey’s career, refuses the linear narratives of art discourse and instead pays homage to the intensities of each mode of Athey’s performative practice and each community he engages. Emphasizing the ephemeral and largely uncollectible nature of his work, the book places Athey’s own writing at its center, turning to memoir, memory recall, and other modes of retrieval and narration to archive his performances.

In addition to documenting Athey’s art, ephemera, notes, and drawings, the volume features commissioned essays, concise “object lessons” on individual objects in the Athey archive, and short testimonials by friends and collaborators by contributors including Dominic Johnson, Amber Musser, Julie Tolentino, Ming Ma, David Getsy, Alpesh Patel, and Zackary Drucker, among others. Together they form Queer Communion, a counter history of contemporary art.

"A Bible-sized tumble through [Athey's] many nuances, chalking up his impact on Modern Primitive body art, HIV/AIDS activism, Los Angeles performance art, the ’90s culture wars, death rock and post-punk music scenes, independent publishing, and gay pornography. . . . The 'Writing Athey' chapters are undoubtedly the crown jewel of this collection, as it occasions the artist’s boundless humor and depth free rein on a number of topics. Athey’s voice rings with alacrity. Its pithy, informed, and sometimes bitchy frankness is unpretentious and singular. . . . The personal revelation of this Communion is an important one. And it’s the humanism that this collection so indelibly registers. . . . [Queer Communion] has a crush on a man who makes work out of all of the cultural cosmologies around him. It reads like a series of love affairs, a 439-page cruising diary through one of the most garrulous, affectionate, and deeply misunderstood practitioners working today. Queer Communion recalls that good old adage about the devil—like her, Miss Athey shimmers in the details."

"This charming and disarming homage to a unique figure provides a backbone to the kinds of invasive physical performance for which Ron Athey is best known. . . . It lives and breathes, creating a well-rounded sense both of a life’s work to date and of the man himself. Fans of Athey’s work, or certainly anyone with an interest in the kinds of experimental performance artists who came punctured and bleeding out of the early 90s will find a great deal of thoughtful, thought-provoking content here."