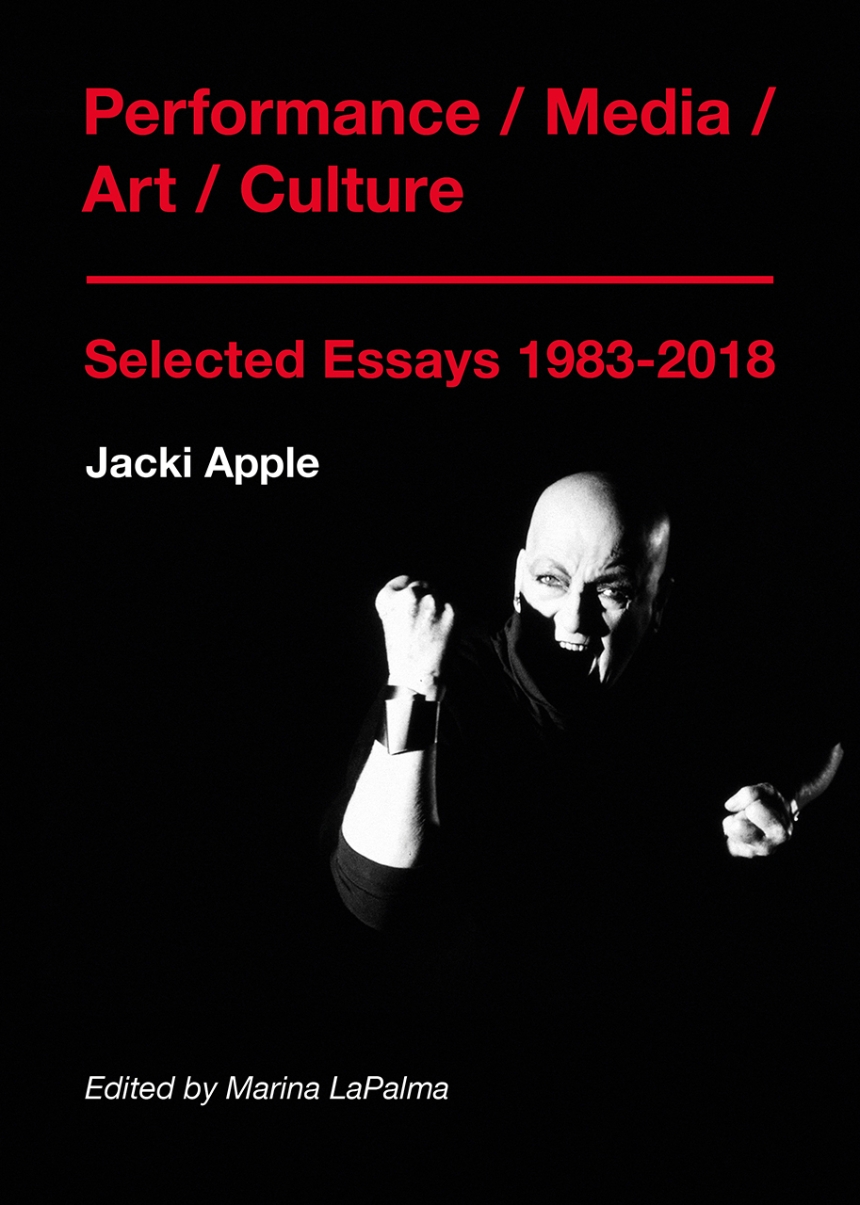 Edited by Marina LaPalma
Experience the interdisciplinary performance scene of the 1980s and beyond through the eyes of one of its most compelling witnesses. Jacki Apple’s Performance / Media / Art / Culture traces performance art, multimedia theater, audio arts, and dance in the United States from 1983 to the present. Showcasing thirty-five years of Apple’s critical essays and reviews, the collection explores the rise and diversification of intermedia performance; how new technologies (or rehashed old technologies) influence American culture and contemporary life; the interdependence of pop and performance culture; and the politics of art and the performance of politics.

Apple writes with a journalist’s attention to the immediacy of account and a historian’s attention to structural aesthetic and personal networks, resulting in a volume brimming with big ideas but grounded in concentrated reviews of individual performances. Many of the pieces featured in this collection originally appeared in small press journals and magazines that have now gone out of print. Preserved and republished here for current and future readers, they offer a rich portrait of performance at the end of the millennium.

“[Apple] seems to have done more thinking and writing about this unstable and hard-to-contain genre than anyone else on the West Coast. . . . As a chronicle of 35-plus years of avant-garde ‘barricadesmanship’ in Los Angeles, Performance / Media / Art / Culture preserves an atmosphere of politico-aesthetic urgency, which can give the reader the off-kilter feeling that art ‘spaces’ surely are the place where ‘the world’ gets changed. Well, it did happen, slowly. Read this book and witness, as freakish, circus-clown narcissism spread like a stain throughout the larger culture. . . . It’s a valuable history of some very untamed goings-on over time, and a detailed chronicle of what can happen when art turns into agitprop ruled by committee. One has the feeling that Jacki Apple’s influence extends to many an arts professor and art performer working today; this book ensures that and also shows why. It will have a long shelf life in academic and art libraries."

"These essays trace important developments in performance art both in the Los Angeles and New York scenes, discuss artists including Laurie Anderson, Spalding Gray, Meredith Monk, and Lin Hixson, and track cultural shifts such as the culture wars of the 1980s, the emergence of left-wing censorship in the 1990s, and the emerging ecological consciousness of today. An essential monument to performance practices that often left behind few records and produced scant archives but radically reshaped performance in the last quarter of the twentieth century."

"[Apple's] dual position as an artist and a critic makes her an ideal guide to the last forty years of American performance. . . .In addition to tracing the rise of the Los Angeles performance scene, Performance / Media / Art / Culture also includes Apple's early reactions to the work of Laurie Anderson, Rachel Rosenthal, and Terry Allen, as well as performance artists such as Leslie Labowitz and Jill Kroesen. These essays do more than report on the facts of each performance. They provide valuable context for the work,  including biographical details available to Apple because she is a friend and colleague of these artists as well as a critic. . . . [Apple] capture[s] the feeling of seeing a piece for the first time and knowing your life will never be quite the same again."

PAJ: A Journal of Performance and Art

"A stunning piece of scholarship, authorship, curation, and artistry. A potent historical record of performance art, it would serve well as a primer for any scholar, artist, or upper level/graduate course interested in learning this history from a primary source. At the same time, the essays combine to become an inspiring call-to-action for experimental artmaking. I frequently found myself wanting to know Apple and LaPalma’s current thoughts on the questions they raise, but the book’s true gift is the space they allow for the essays to question each other. Through their tremendous restraint in not adding additional comment, they invite readers to explore their own curiosity about performance, performance art, or whatever term comes next."

"Only a handful of writers have the intellectual chops, creative intuition and vision of art history to speak holistically about performance art, but Jacki Apple consistently proves herself essential to the field and how we understand it. She digs into both the formal and the ineffable dimensions of performance with unmatched power and clarity without sacrificing honesty about the art and artists she clearly loves. Apple stands in the evolving vortex of performance art so we can see its future."

"For several decades now, Apple's astute observations of the arts, performance, and culture in Los Angeles have added profound insight to this still-burgeoning landscape populated by the movers and shakers who flock here. Her history as an artist in her own right expands the depth and comprehension of her analysis. She has been an influencer in the truest sense, advancing the cultural discussion with erudition and compassion. Among the annals of tomes dedicated to understanding why LA is so significant, so centripetal, this is a long-awaited addition."

"Writing with deep historical knowledge, compassion, and generosity, Apple is an artist’s critic, always seeking first to reveal and then to celebrate the heart of a performance, no matter what the medium. Her fearless radicalism, tempered by a refreshing sense of humor, uncovers buried roots while also posing the most essential cultural question: how does this art help us understand who we are? I am particularly enthralled by the final section—essential reading during a time when ecocidal capitalism has surely reached the breaking point."

"Apple’s writing about the temporal arts stuns the reader with its capacity to contextualize projects historically. She weaves together diverse cultural interventions with an urgency about their meaning for this crucial moment in the world."

"Apple has always made works that come at you from every possible angle. As composer, performer, writer, and cultural detective, she is fearless at pushing the boundaries of her own work, while simultaneously providing platforms for other artists to push their own possibilities. This book has been brewing for over thirty-five years. It is the story of what, where, when, why, and how we are in this culture now, told by a vital participant and invaluable witness.”

"Apple is a tireless advocate for the aesthetic, the generative, for art that intervenes and illuminates. She is the rare artist who is generous and revelatory, bringing enormous skill and knowledge to the work of fellow artists crossing many disciplines, as do her own intricate and multifaceted creations."

"Apple has always been a fair and thoughtful advocate of the arts. There are so few writers with her depth and knowledge around. Expansive and generous, Jacki writes with an open, inclusive heart."

"Apple’s heightened artistic perception has opened my eyes to the meaning of my early, visceral, raw performances from the1980s to the present, more theatrically polished ones. Her insightful, critical writing not only changed the way I understood my own work and its role in pushing boundaries and breaking taboos, but also the performance work of my peers in times of political pressure. For anyone who wants to understand this history, this book is eye-opening."

"In the late 1980s and early '90s, Jacki Apple's pioneering essays on radio art as an emerging practice in the U.S. stood tall. Hardly any other writers publishing texts on radio, came from an arts background let alone an interdisciplinary one. Apple did, and her voice spoke with unprecedented insight, intellectual rigor, clarity and passionate conviction on the subject. She discussed and critiqued the most innovative and inspiring art works for broadcast in the context of the politics of the industry and of contemporary American culture. This wonderful edition encompasses the full range of her critical writings."

"Apple's accurate, intimate, gracious, erudite, and insightful writing provides a front row seat to an expanding cultural big bang. This book is a gift to those of us determined to understand the who, the where, the when, the how, and the why of the tectonic shifts that brought social interaction into the scope and insight of art makers. Her enthusiasm for the subject coupled with a commitment to her readers makes for learning more than history. She makes the history feel contemporary."