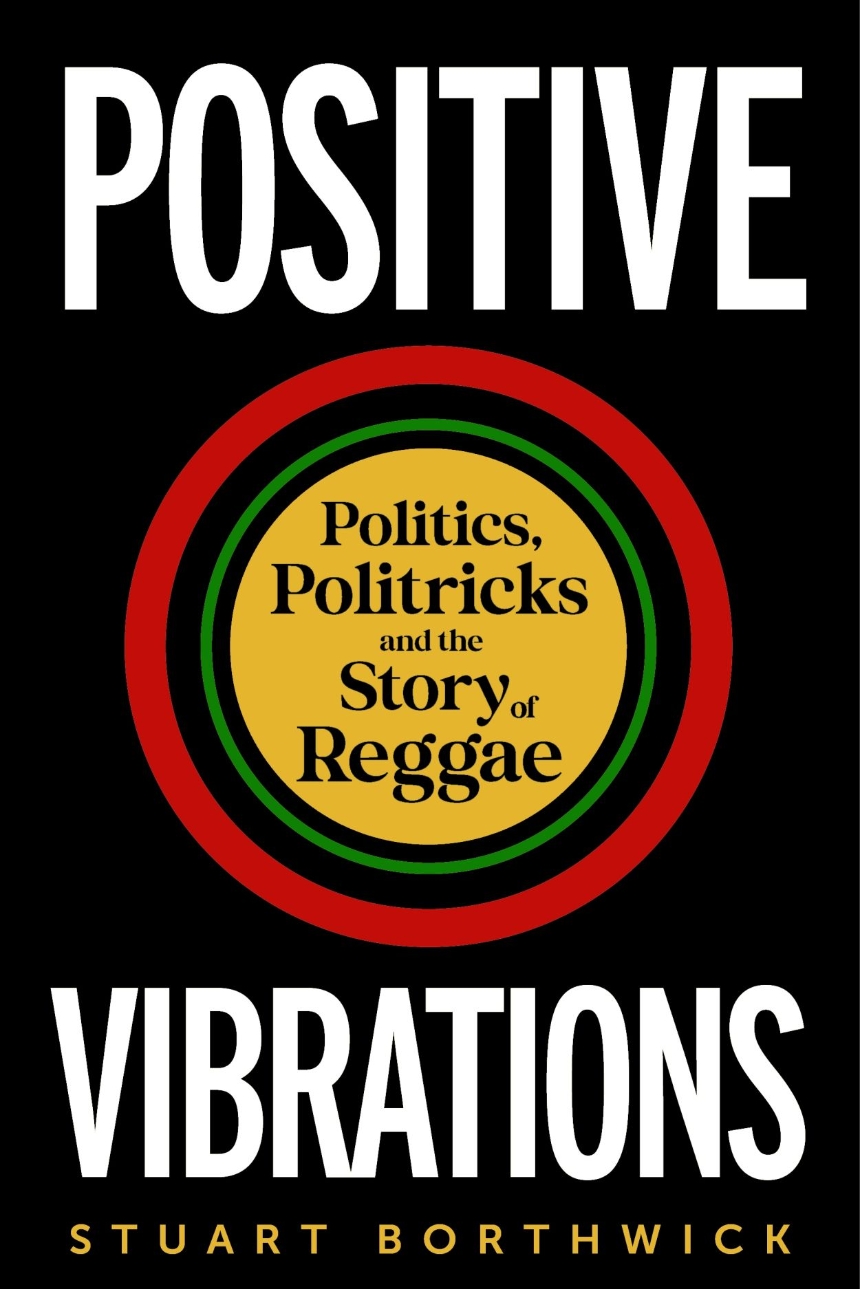 Politics, Politricks and the Story of Reggae

Politics, Politricks and the Story of Reggae

From Marcus Garvey and Rastafarianism to today’s ubiquitous dancehall riddims, a comprehensive and impassioned exploration of reggae.

Positive Vibrations tells of how reggae was shaped by, and in turn helped to shape, the politics of Jamaica and beyond, from the rudies of Kingston to the sexual politics and narcotic allegiances of the dancehall. Insightful and full of incident, it explores how the music of a tiny Caribbean island has worked its way into the heart of global pop.

From Marcus Garvey’s dreams of Zion, through ska and rocksteady, roots, riddims, and dub, the story closes with the Reggae Revival, a new generation of Rastas as comfortable riding rhythms in a dancehall style as they are singing sweet melodies from times gone by. Impeccably informed, vibrant, and heartfelt, Positive Vibrations is a passionate and exhaustive account of the politics in reggae, and the reggae in politics.

"In Positive Vibrations, Borthwick's excellent new history of reggae music—the putative soundtrack of Rastafarianism—and its historical and political importance since its inception in the early 1960s, the author demonstrates respect for the music and the faith that inspired it even as he examines the flaws and contradictions in both. . . . They aren’t likely to read a lot on summer break, but I think the world would be a better place if every college kid grooving to Marley, Peter Tosh, Burning Spear, and others took the time to learn there’s a lot of heart behind the soul of their poolside-kegger soundtrack. Positive Vibrations is a good place to start."

"Taking as its starting point that reggae is rooted in the forced migration of Africans during slavery, Positive Vibrations offers a nonstandard exploration of reggae's evolution and its problematic relationship to politics. Surveying the available literature, Borthwick shows how Marcus Garvey's vision of Black self-determination spurred the rise of Rastafari in Jamaica, his separatism a catalyst for the radical Nyabinghi branch, and unpacks the complex connections between Jamaican performers and the nascent state in the pre- and post-independence phases, honing in on the uneasy relationships that were key to the local power struggles of the Cold War and beyond. Tracing the influence of reggae on the punk, post-punk, and 2Tone movements in Britain, Borthwick goes on to explore the positioning of women in dancehall and the subgenre's caustic homophobia, before contrasting the more recent Reggae Revival with the 'Dubplate Election' of 2020. A readily accessible, nuanced and thought-provoking read, Positive Vibrations offers much for fans of the music and reggae scholars, as well as those interested in postcolonial theory and the politics of liberation."

As the famous aphorism goes, writing about music is like dancing about architecture. For this reason, this book is not an economic or political history of reggae in a conventional sense but is an attempt to tell the story of the journey of a rhythm and a sound from a bygone age. This is the story of how a rhythm was imbued with terror and dread as it travelled across an ocean, and how it was then nurtured and held tight by an enslaved and oppressed people before being sold around the world in the past half a century or so. Positive Vibrations is also the story of how reggae is special, a sacred music inextricably connected to a uniquely twentieth-century religion, and a musical form that has been buffeted by local and global political forces since its development around sixty years ago.

In his book The Black Atlantic: Modernity and Double Consciousness, Paul Gilroy observes that racial slavery was central to the development of Western civilization, and that modern civilization is the product of what he describes as a Black Atlantic, yet little is known of this history. Starting out from this premise, one chapter in Gilroy’s book examines the significance of music within our understanding of the Black Atlantic, and how a focus on Black music challenges the view that language and writing are the preeminent expressions of human consciousness. Gilroy explores the notion of Black Atlantic music as a distinctive counterculture of modernity, and how Black popular culture articulates the experience of being both within and without ‘the West’. Importantly, he emphasizes that Black Atlantic culture is hybridized, the inevitable product of a creolization, and that modern Black music is the product of a melding of styles from Africa, the Caribbean, the United States and Europe. Without wishing to offer any sort of comparison between my book and Gilroy’s groundbreaking study, Positive Vibrations picks up from Gilroy’s chapter and explores a form of music that has its roots in both Africa and the slave trade, and which developed out of a form of Black nationalism and Black communitarianism that was both of this world and outside it, both material and metaphysical. In this way, Positive Vibrations traces the development of reggae and how it was shaped by, and helped also to shape, the politics of Jamaica and the post-colonial politics of ‘the West’, showing how reggae articulated the experience of a racial majority at a crucial point in the development of a tiny Caribbean island, leading to Jamaica punching well above its weight in both musical and commercial terms.

Positive Vibrations argues that modern reggae contains a unique fusion of religious and secular styles that were peculiar to Jamaica, and shows how, as the genre evolved, it played a significant role in the development of new musical forms in the global North, with a hybridized global pop now carrying with it both the trebly assonance of dancehall and the rumbling bass of reggae’s dub side. ‘Dancehall’, that most English of terms yet also a Jamaican phrase, is a musical form controversial for its perceived commercialism, misogyny and homophobia, but also a sound that has conquered the world with huge-selling singles and albums. Finally, this book explores how, at just the point when it seemed that Jamaican music was about to merge with r&b, soul and hip-hop within a new global pop music, we would see not the gradual extinction of reggae but its rebirth. The twenty-first-century ‘Reggae Revival’ sees a new generation spearheading the rejuvenation of what is now one of the world’s most recognizable genres of popular music. Accompanying the heartbeat of reggae in this new modern form is also a new politics and the return of the Afrocentrism heard during reggae’s earlier development. Almost all of this new generation of musicians share a religion with their musical forebears, with the distinctive worldview of the Rastafari born out of the experiences of ancestors of the enslaved. It is here, then, among the Rastafari, that the story begins.

Chapter 1: ‘Look To Africa’: The Politics of the Rastafari

“Look to Africa, when a black king shall be crowned, for the day of deliverance is near”.—Attributed to Marcus Garvey

The Rastafari frequently object to the characterization of their movement as a religion, while also objecting to the suffix ‘-ism’ being appended to Ras Tafari, the name taken by Lij Tafari Makonnen when he became Prince Regent and heir to the throne of Ethiopia in September 1916. For many Rastafari, the phrase ‘Rastafarianism’, along with any reference to their worldview as a religion, is the language of Babylon, that ancient evil empire from which all subsequent oppressive regimes draw their sustenance.

In objecting to the classification of their beliefs as a religion, the Rastafari do have a point: their way of thinking is contradictory and slippery to the intellectual touch. Once you think you have grasped it, its language shifts and melts away. Their beliefs are founded in an anti-colonial movement in the Caribbean, yet they venerate an African emperor who largely spurned his Jamaican followers. Their worldview can be seen to be politically anti-capitalist, yet adherents say that their belief in a oneness with God pre-dates the modern era. Theologically, the faith combines elements of African spirituality, Coptic Christianity, Judaism, Ethiopianism, Revivalism and Western Protestantism, although the Rastafari do not see it like this. Controversially, the Rastafari rail against the racism of Babylon, yet within the history of their movement is enough racial supremacism to make a Western liberal blush.

The faith of the Rastafari is an ancient yet modern brew, born out of the speeches of Marcus Mosiah Garvey (1887–1940), a Jamaican-born black nationalist, activist and global leader who introduced Afrocentrism to an exiled diaspora hungry for change. Garvey was born in St Ann’s Bay on the island’s north coast in 1887 in a British colony still reeling from the Morant Bay Rebellion of 1865, when a courthouse was attacked by a crowd led by the preacher Paul Bogle. The response of the authorities was devastating, with several hundred shot on site and several hundred more executed afterwards.

Initially a trade unionist and ardent traveller, Garvey’s developing political consciousness was piqued by what he saw while searching for work in Costa Rica, Panama, Guatemala, Nicaragua, Ecuador, Chile, Peru and, eventually, England, where he attended lectures at Birkbeck College and worked in the docks of London, Cardiff and Liverpool. As a writer and orator, Garvey was beginning to develop a devastating style that combined hard-edged political militancy with spirituality and prophecy. Upon his return to Jamaica in 1914, and despite his young age, Garvey rapidly became one of the island’s best-known Black leaders, establishing the Universal Negro Improvement Association (UNIA) as a global confraternity among Africans and those of African descent. Heady stuff for a 27-year-old, whose mixture of self-belief and a driving desire for change led him to leave Jamaica again only two years later, this time bound for the United States. Garvey arrived in New York, where he mixed with scholars and Black radicals before his restlessness took hold again and he embarked on a tour of 38 of America’s states. Finally returning to New York at the start of what became known as the Harlem Renaissance, Garvey refocused his energies on developing the American branch of the UNIA, which was soon to become the headquarters of an international movement for Black self-help, salvation and liberation.

While in New York, Garvey began work on several money-making ventures, none of which captured the imagination more than his Black Star Line, a commercial shipping line formed to assist in the repatriation of the Black diaspora to Africa. Self-determination of Africans, ‘at home and abroad’, came to sit in the centre of Garvey’s consciousness and political position, and he continued to employ his oratorial brilliance in set-piece speeches throughout his own growing empire. UNIA-owned printing presses in Costa Rica, Panama, Harlem and Jamaica helped to spread the word further.

By June 1919, Garvey was claiming that his organization had 2 million members worldwide, making him the world’s first truly global Black leader. Local and national branches of the UNIA were semi-independent of their parent body and organized educational activities, debates, concerts and dances, while collecting local dues, paying out sickness benefits and sending a percentage of income to the UNIA HQ in New York. There and in other American cities, UNIA women met once a week to practise military drills, eventually forming the UNIA Motor Corps.
….