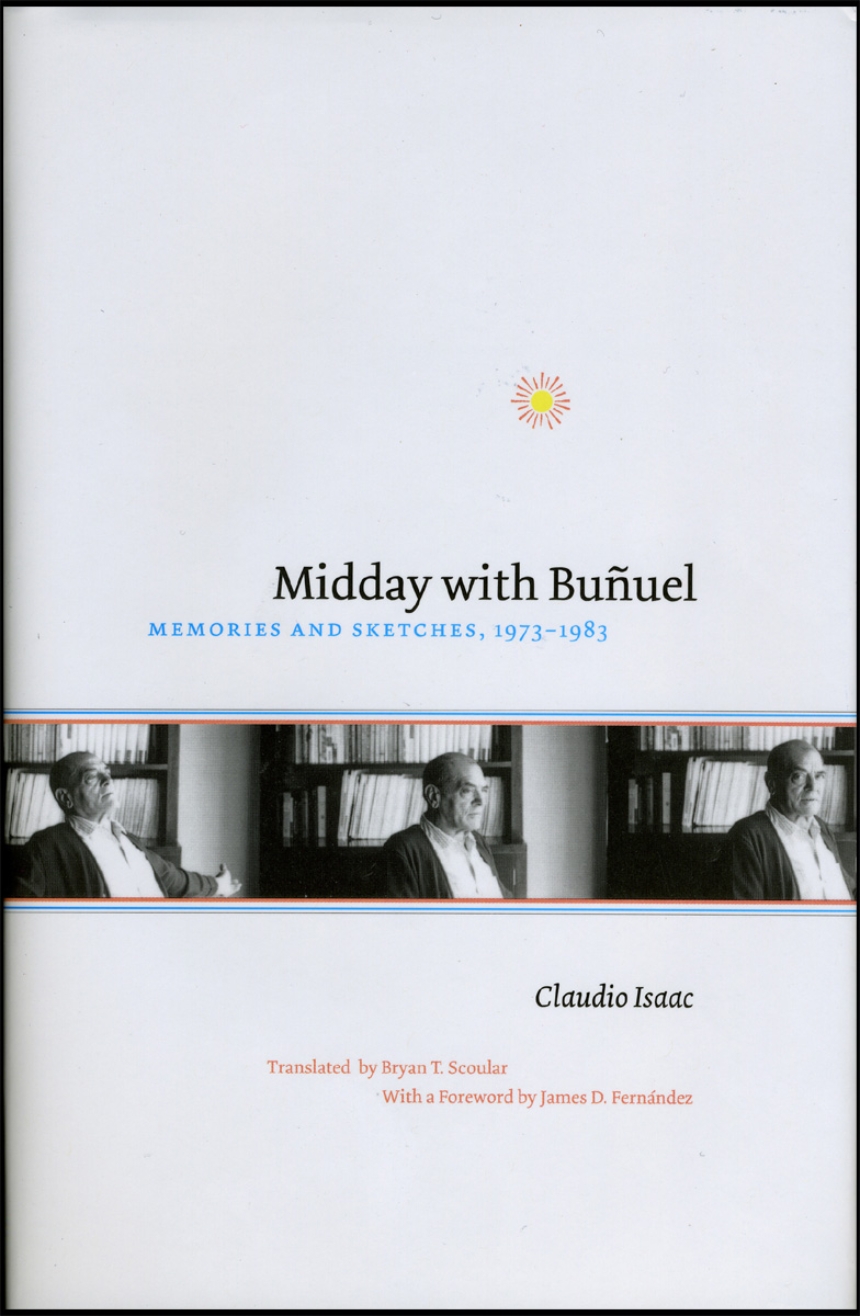 Translated by Bryan T. Scoular with a Foreword by James D. Fernández
Spanish filmmaker Luis Buñuel (1900–83), known for his surrealist themes and unflinching social criticism, was an artist defined by intellectual ambition and controversy. An exile who produced some of his most famous work in Mexico and France during Franco’s dictatorship, he left a complicated imprint on the creative landscape of the twentieth century and on generations of younger filmmakers—including his Mexican friend Claudio Isaac. Drawn from Isaac’s personal papers, Midday with Buñuel: Memories and Sketches, 1973–1983 is an intimate and unconventional portrait of this cinematic icon—and memoir of Isaac’s own artistic development.
The text includes sketches, vignettes, and anecdotes from Isaac’s notebooks, revealing his perspective first as a precocious boy and then as a young man. Isaac reflects on Buñuel’s presence among a community of exiles, artists, actors, writers, and intellectuals in Mexico City. These are at once touching, perceptive, and critical glimpses into Buñuel’s roles as husband and father, friend and colleague, surrealist, philosopher, and iconoclast during his last years. Throughout, Isaac’s words reveal his deep admiration and affection for an older friend full of contradictions. Intimate photographs from the Isaac family archive complement the writing, and Bryan Thomas Scoular’s careful translation makes this text available for the first time in English.
Part biography, part memoir, Midday with Buñuel brings to life the creative milieu of Mexico City and gives readers a privileged view of the relationship between these two filmmakers.

"It’s an honor, indeed I’m glad, to join in giving a warm reception to a book that has given me many delightful moments."—Enrique Vila-Matas, author of Bartleby & Co.

"This is an essential book to discover the more intimate Buñuel. The view of a young Claudio Isaac, with photographs and sketches illustrating his memories, provides us exceptional insight into those human and hidden aspects beyond the public persona of this brilliant film director."—Javier Espada, director, Fundación Centro Buñuel de Calanda

“In a series of vignettes, dialogues, and journal entries, Claudio Isaac gives us a fascinating glimpse of Buñuel and his wife Jeanne Rucar and their friendship with a young man—fifty-seven years younger—who is making his way in the world of Mexican cinema. It is a vivid, memorable portrait. Affectionately, Isaac deals with Buñuel’s contradictions—his dogmatism and tenderness, his love and his contempt for cinema, his shyness and his exhibitionism—and his struggle against thoughtless ‘deification.”

"I was both charmed and moved by Midday with Buñuel, Mexican filmmaker and writer Claudio Isaac's personal and very poetic recollection of his friendship with his mentor, the Spanish surrealist Luis Buñuel."

“Just when Buñuel experts thought everything had been told about the Spanish surrealist auteur comes Midday with Buñuel: Memories and Sketches, 1973–1983, a new collection of anecdotes and remembrances by Claudio Isaac. . . . Isaac’s recollections of his very personal and enriching friendship with Buñuel are peppered with a variety of unpublished photographs, many of which transport the reader to another era. . . . His memories of the director fill a void in the historical record, for they become the first memories of a young Isaac, engaging with the elder surrealist for the better part of two decades in a teacher-student relationship about film, culture, obsessions, and ultimately life. . . .The English edition has been wonderfully illustrated and masterfully cared for by Swan Isle Press.”

Illustration Credits  153
About the Author  154