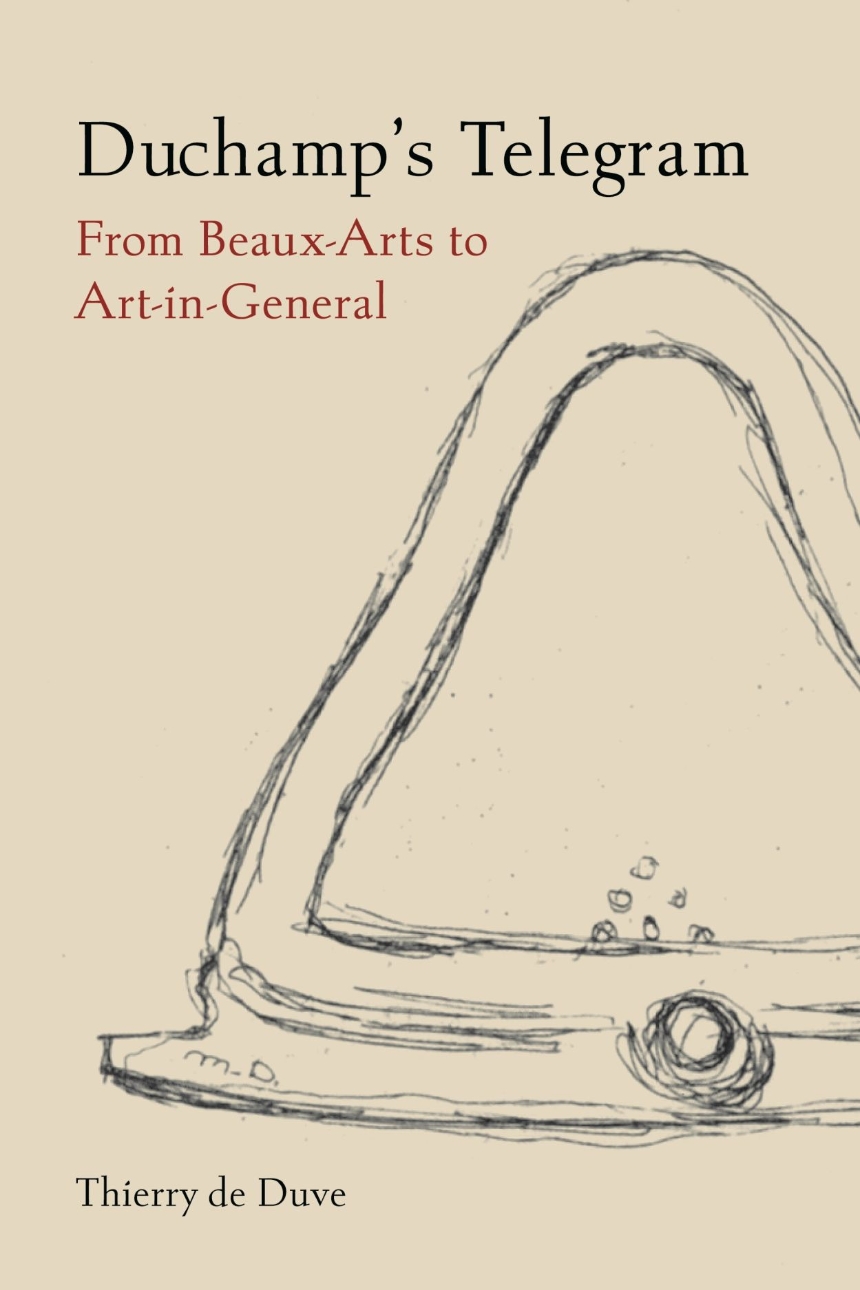 A revisionist history of Duchamp’s legacy and impact on modern art.

In 1917, Marcel Duchamp telegrammed a photograph of a urinal signed R. Mutt and called it art. When the piece arrived at its destination a good forty years later it was both celebrated and vilified as proclaiming that anything could be art—whereupon the whole Western art world reconfigured itself as post-Duchamp. This book offers a reading of Duchamp’s telegram that sheds new light on its early reception and critical legacy, heralding Duchamp’s urinal as the end of the fine arts system and the beginning of what de Duve calls the Art-in-General system. Further, de Duve traces this new perspective back to the 1880s and charts a new history of radical art with Duchamp, not as its author but its most famous messenger.

These days, a seemingly endless stream of books, articles and questionnaires lament the lack of theory to help us navigate the globalized land- and webscape of current art. As Hal Foster has written, introducing one such questionnaire on ‘the contemporary’ in the journal October, ‘such paradigms as “the neo-avant-garde” and “postmodernism”, which once oriented some art and theory, have run into the sand and, arguably, no models of much explanatory reach or intellectual force have risen in their stead.’ Although I’m not sure that models and paradigms are desirable when it comes to art in the making, I share Foster’s diagnosis that the neo-avant-garde and postmodernism have run into the sand. Why have they? If there are answers at all to this question, they must be historical; pursuing them is not a task for the critic of the contemporary but rather for the historian. What are the chances that the neo-avant-garde and postmodernism were not adequately theorized because the concepts they supposedly replaced or criticized were mis-construed in the first place? Does the malaise around ‘neo’ and ‘post’ not call for a reassessment – a reappraisal, perhaps, a reinterpretation, certainly – of the avant-garde and/or modernism?
(…)
I had no issue with postmodernism in the 1980s. From the outset, the concept seemed to me profoundly flawed, merely reactive and devoid of proactive content: no more than the symptom that something had gone awry with modernism. Why otherwise would people not want to be modern anymore – an all too desirable epithet until then? One answer, rehearsed ad nauseam, was that modernism had failed to deliver on its promises of progress and emancipation; the transgression of esthetic boundaries no longer stood for individual or political libera-tion; hedonism, wishy-washy pluralism and commercialism had voided art practice of all critical dimension; anti-conventionalism had turned into another stale convention; the already problematic notion of the neo-avant-garde had made way for the more than dubious notion of the trans-avant-garde. And so on. Notice that all these complaints, which indulge in melancholic nostalgia for the allegedly purist radicality of the historical avant-gardes, take for granted a certain, entirely negative, definition of the avant-garde – in Renato Poggioli’s classic account: ‘activism, antagonism and nihilism, agonism and futurism, antitraditionalism and modernism, obscurity and unpopularity, dehumanization and iconoclasm, voluntarism and cerebralism, abstract and pure art’ – of which they bemoan the loss of dialectical resolution.4 I’m afraid the question mark in the title of Suzi Gablik’s book Has Modernism Failed?(1984) was merely rhetorical:
In the complex transition from modernism into postmodernism, a new terrain of consciousness is being occupied – one in which the limits of art seem to have been reached, and overturning conventions has become routine. As long as we are willing to consider anything as art, innovation no longer seems possible, or even desirable. At this point in the breakup of modernist culture, as we draw away from it, we might do well to consider exactly what we have gained, now that the avant-garde has exhausted its task; and equally, what we may be losing as a result from its disappearance from the scene. It is not easy to represent to ourselves a whole that has been made up of so many changes and violent contrasts. Are we leaving behind us a period of success and resonant creativity, or one of impoverishment and decline? Has modernism succeeded, or has it failed?

The phrase in that lament that still sustains my attention more than thirty years after it was written is: ‘As long as we are willing to consider anything as art . . .’ But I am sceptical regarding the premise of that willingness, namely, that ‘the limits of art seem to have been reached.’ It appears to me, on the contrary, that to be willing to consider anything as art entails the realization that art has no limits. And I am even more sceptical regarding the consequence Gablik drew from her premise: ‘innovation no longer seems possible, or even desirable.’ This is a conclusion no art historian should feel authorized to make. What do we know about the things artists find possible and desirable? What do we know about innovations that have not yet been made, and where they will come from? Art historians deal with the past, and though I agree with Gablik that they should look at the past asking themselves what it has in store for the future, all they can do is try to reappraise, reinterpret or reassess the past in such a way as not to mortgage the future.

Duchamp’s Telegram, the first volume of a two-book project conceived under the heading Modernism Revisited, proposes a roadmap for this reassessment. The book revolves around a single work, the famous and infamous Fountain, a men’s urinal tipped on its side, signed R. Mutt and dated 1917, which its reception history has propelled to the pantheon of modern – or is it postmodern? – art and earned Duchamp the reputation of most influential artist of the twentieth century. Fountain will here be the object of an inquiry that will take us far away – very far away – from the thing itself to its historical underpinnings and its reception history, an inquiry which, as I hope to demonstrate, debunks a few modernist – and postmodernist – myths. Yet despite the distance Duchamp’s Telegram takes from its object, the book can be read as a monograph on Fountain, one that offers a novel interpretation of its historical purport and its consequences for subsequent art practices. It is not a book on Duchamp, though; it is not even a monograph on Duchamp’s urinal – by which I mean that the emphasis is not on who created Fountain. The emphasis is on the ‘telegram’, on the news Fountain conveyed, with Duchamp in the position of the telegram’s sender. He is the creator of Fountain as a work of art – or non-art, or anti-art or an-art, denominations that will be discussed in due time – but he is merely the messenger of Fountain as a telegram. This is not to diminish his merit, although, as will gradually emerge, the merit shifts to an area of grey matter which art history is not used to treating as the seat of creativity, and which the hagiographic celebration of Duchamp’s influence has not really recognized: the lucidity to see things as they are.