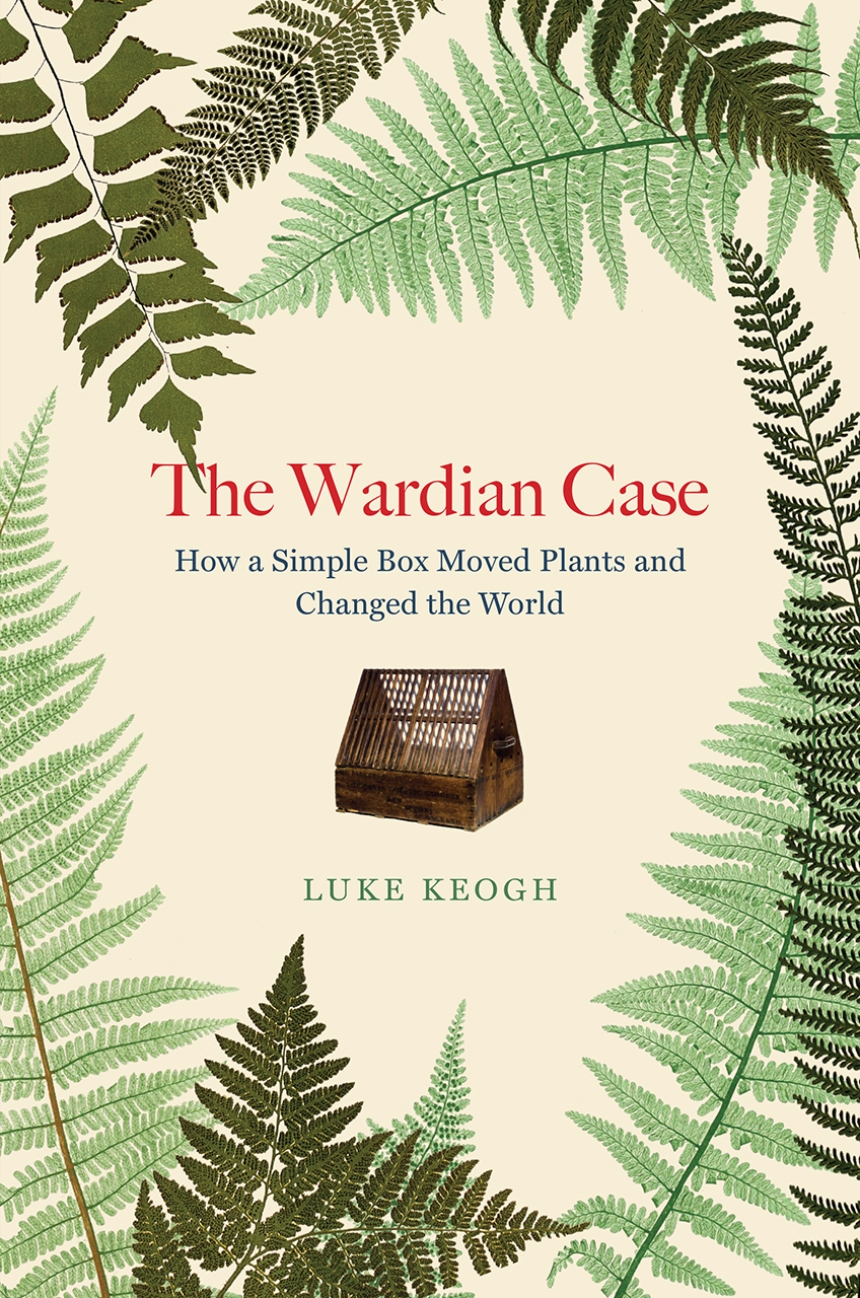 How a Simple Box Moved Plants and Changed the World

How a Simple Box Moved Plants and Changed the World

The story of a nineteenth-century invention (essentially a tiny greenhouse) that allowed for the first time the movement of plants around the world, feeding new agricultural industries, the commercial nursery trade, botanic and private gardens, invasive species, imperialism, and more.

Roses, jasmine, fuchsia, chrysanthemums, and rhododendrons bloom in gardens across the world, and yet many of the most common varieties have roots in Asia. How is this global flowering possible? In 1829, surgeon and amateur naturalist Nathaniel Bagshaw Ward placed soil, dried leaves, and the pupa of a sphinx moth into a sealed glass bottle, intending to observe the moth hatch. But when a fern and meadow grass sprouted from the soil, he accidentally discovered that plants enclosed in glass containers could survive for long periods without watering. After four years of experimentation in his London home, Ward created traveling glazed cases that would be able to transport plants around the world. Following a test run from London to Sydney, Ward was proven correct: the Wardian case was born, and the botanical makeup of the world’s flora was forever changed.

In our technologically advanced and globalized contemporary world, it is easy to forget that not long ago it was extremely difficult to transfer plants from place to place, as they often died from mishandling, cold weather, and ocean salt spray. In this first book on the Wardian case, Luke Keogh leads us across centuries and seas to show that Ward’s invention spurred a revolution in the movement of plants—and that many of the repercussions of that revolution are still with us, from new industries to invasive plant species. From the early days of rubber, banana, tea, and cinchona cultivation—the last used in the production of the malaria drug quinine—to the collecting of beautiful and exotic flora like orchids in the first great greenhouses of the United States Botanic Garden in Washington, DC, and England’s Royal Botanic Gardens, Kew, the Wardian case transformed the world’s plant communities, fueled the commercial nursery trade and late nineteenth-century imperialism, and forever altered the global environment.

“Environmental historian Keogh charts the history of the Wardian case, a traveling greenhouse, in his fascinating debut. . . . Any gardener fascinated by history will find this well-told story fruitful.”

“Explores how a humble box made of wood and glass changed the course of world history. . . . [A] well-balanced, thoughtful account. . . . Keogh carefully teases out the connections between this innovation and its multiple consequences. . . . An in-depth study that will suit detail-oriented gardeners and natural history buffs.”

"An airtight box built in the late 1820s of glass panes and a wooden frame, the Wardian case was ingenious in its construction and application. Its inventor, an amiable English physician and amateur botanist named Nathaniel Bagshaw Ward, discovered that plants rooted in moist soil, then hermetically sealed in the box, and that box placed in a sunny location, could grow for weeks, even months, with little maintenance. . . . Keogh tracks the preeminent role, for better or worse, that the Wardian case played over the next century, first in the creation of many of the world’s major botanic gardens, then in the development of a massive international market for nonnative plants, resulting in the colonization of nations for the cultivation of cash crops and the often-ruinous spread of plant pests, diseases, and invasive species. If the Wardian case has long been abandoned for the air-freighting of plant material, Keogh's bittersweet history reveals just how impactful that simple box remains today."

“In The Wardian Case, Keogh covers the Ripping Yarns-style consequences of its use: from plant hunters sending back specimens to British nurseries and a gardening public hungry for new ornamental species such as rhododendrons, camellias and fuchsias, the huge economic benefits for empire builders—not only the British (including in Keogh’s native Australia) but French and German and the new territories of the United States. Commercial agricultural crops such as coffee, cocoa, tea, rubber, bananas, and cinchona (from which antimalarial quinine made) were transplanted to continents far from their native home. And, very much in tune with today’s gimlet revisionist eye on colonial history, Keogh examines the dark side of this. While the colonists and investors may have reaped the benefits of these new plantations (sometimes with crops smuggled from their home countries), the indigenous people lost their precious lands to mile-after-mile of monoculture, and were often used as indentured labor in the harshest of conditions.”

"Engrossing, well-illustrated. . . . The tires on your car. The tea in your cup. The exotic plants in your garden or decorating your home. These and many more everyday items that have become part of our lives trace their roots to Ward’s eureka moment. But Keogh’s meticulous, globe-trotting investigation is a sobering reminder of the profound impact humans have had on the planet simply by moving plants."

"Keogh presents the remarkable story of this chance discovery and its world-changing effects. If you are already familiar with Wardian cases, you’ll be delighted with this opportunity to learn the fascinating history of their discovery and development. And if you’re unfamiliar with them, this book will introduce you to one of the most on-the-surface mundane but in reality most world-changing technological innovations of the nineteenth century."

"Keogh’s book, the first to discuss the Wardian case, really explains how this invention drove the revolution in plant relocation. He steps back through time to paint a vivid picture of Dr. Ward, his associations with both amateur and professional horticulturalists, and how the exploration in remote regions of the world—along with the successful transportation of then-unknown plants—forever changed our botanical world. Of course, nineteenth-century imperialism reared its ugly head during this era and that too is addressed by Keogh. Whether you are interested in collections of rare orchids, the history of quinine plantations, expansion of tea growing regions in the world, or the early days of rubber trees, this book covers it all  in amazing well-researched detail. Our world has been changed dramatically due to this one invention, and for that reason alone it is well worth reading about."

"The Wardian case was nothing more than a simple wooden box. Yet it’s no exaggeration to say that this box literally changed the world we live in. Now an Aussie environmental historian has chronicled its remarkable history in an entertaining new book. If you’re a sucker for tales about early plant explorers (as I am) this is an eye-opening read. It made me realize the debt we gardeners owe to Nathaniel Bagshaw Ward, a medical doctor and amateur botanist who devised the box (a forerunner to the modern terrarium) to help plants survive in the dirty air of Victorian London. . . . Predictably, all the botanical bustling about the globe had a downside. Invasive species spread too and the soil used in the boxes transported myriad diseases and bugs. But what happened makes a great story, and Keogh tells it well. The photos are also fascinating."

"Keogh documents many such examples of desirable plant translocations: tea, bananas, fever bark, orchids, cacao, and others of horticultural interest. Alongside the desirable plants, pests were also moved, and such global ecological alteration is also part of the story. Keogh details these plant introductions and related scientific studies, set within the cultural and expeditionary context of a network of influential scientists, colonists of varied circumstances, and government colonizers, along with biographical notes on the plant explorers whose efforts were critical to these ventures. Recommended."

"The Wardian Case is abundantly illustrated, meticulously researched and evidence-based—more than thirty pages of detailed notes supplement the text—and engagingly written. Keogh is to be congratulated on bringing the story of this humble, but world-changing, box to greater prominence and to the attention of all, and adding to the debate about botanical Imperialism. This is powerful plants-and-people fare!"

"Keogh’s research resurrects a vanished technology and makes possible a new set of questions about the events it silently witnessed."

“The Wardian Case gives us profuse examples of how the case made possible some of the important botanical introductions into Europe and other countries, and how it was used (successfully and less so) in practice. We learn how the case evolved and changed after Ward died in 1868. Then there are the problems caused by transporting plants and their soil around the world, leading to invasive plants and animals. Along the way we hear about various botanical journeys and expeditions and some of the movements of important crop plants, such as rubber, bananas, tea, and cinchona. Fresh, fascinating, and largely untold, the story of nineteenth-century surgeon and naturalist Nathaniel Bagshaw Ward, his ‘big’ invention, and its impact on the world then and now deserves the kind of scholarship Keogh provides.”

“The Wardian Case explores how a seemingly mundane piece of Victorian technology has transformed global environments, in large ways and small, by facilitating the global exchange of living plants. Detailed and nuanced, it is not just the history of an object, but also of a national and then global network of people interested in long-distance plant transfers. It shows how the Wardian case helped create new kinds of social, biological, and ecological connections between distant parts of the world, from the early nineteenth century to the mid-twentieth century. Keogh’s writing is vivid and lively, and the book sparkles when he describes Ward’s houses and his broader world. Elsewhere it is filled with rich images—of children in India struggling to carry heavy Wardian cases, of Japanese carpenters trying to figure out how to build a Wardian case, of new species of worms from Southeast Asia appearing in Kew, and of the author’s own encounter with the ecological legacy of the Wardian case, with his sons on a beach in Australia. Engaging and accessible, this is a significant contribution.”

Stuart McCook, University of Guelph, author of "Coffee Is Not Forever: A Global History of the Coffee Leaf Rust"

"The Wardian Case, with its quality illustrations, informative graphs and maps, together with clear and vivid prose, makes it an insightful read and a valuable contribution to the field of environmental history. It brings to the fore the ecological legacy of the Wardian case – today’s world of cash-crop plantations and plant diseases that threaten native species. In short, it deserves a wide readership both inside and outside academia."

2. A Brief History of the Plant Box

Acknowledgments
Notes
Index
Back to top

The Council on Botanical and Horticultural Libraries: Award for Excellence in History
Won